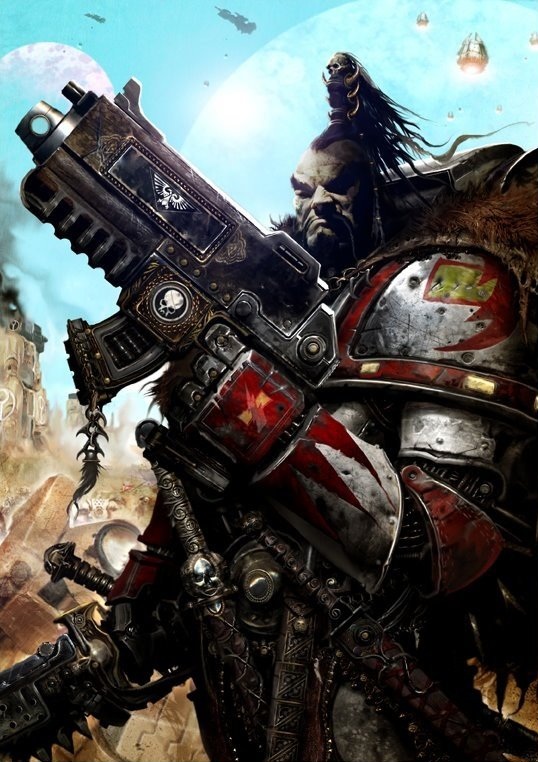 From the ancient times of Egyptian Pharaohs and Roman Emperors, to the modern times of Renaissance conflict, mounted warfare has ever been integral to successful strategy. Cavalry are the shock troops that barrel through the flank of a formation, or the scouts that harass and slow down an advancing army. This is where the White Scars, progeny of the Great Khan, have mastered the arts of combat; from atop a saddle, albeit one surrounded by metallurgy and futuristic weaponry, they have brought annihilation to the enemies of humanity. They are ferocious and unrelenting as any accomplished hunter should be, swift death following in their wake; they pursue as swiftly as the night chill, and strike with the iron hard grasp of a titan. Whether it is to destroy exposed supply chains, cripple scouting positions or cleave a bloody path through the ranks of an army, the White Scars rank among the most accomplished of the Emperor's Finest. As the horns of war are sounded, the Great Hunt ensues, and the White Scars will not stop until righteous devastation is visited upon their foe. None can hide from the swift embrace of motoring steel.

Born in the Saddle - This provides units mounted on Bikes a bonus of one to both their Jink saves and the Strength value of their Hammer of Wrath attacks, in addition to automatically passing dangerous terrain tests. Not only do White Scars Biker units get 4+ Jink saves, giving them a defensive boost of about 17% against AP3 and AP2 weapons compared to regular Biker units, but never having to worry about dangerous terrain means they can use terrain to their advantage as they please. They can use terrain to block of line of sight completely, such as hiding in or behind ruins, or just pass through intervening terrain between them and their quarry with no fear of losing models. That they also have Strength 5 Hammer of Wrath attacks is just the icing on the cake, what with 12" moves and the ability to charge after firing increasing the value of this ability. Strength 5 Hammer of Wrath attacks from up to eight Bikers in a unit is nothing to sneeze at whatsoever.

Fight on the Move - This provides units in the army that aren't Terminators or Centurions with Hit and Run, giving them a massive offensive and defensive boost. This amazing special rule applying to the vast majority of an army list is ridiculous for a lot of reasons, namely that they can reliably escape from any unfavourable combat using the army-wide Initiative scores of four or higher. Protracted combat solutions for silencing ranged units such as Devastators will not work at all against White Scars with a minimum 66% chance to succeed in their Hit and Run tests. If charged by a Trygon that only manages to kill half or less of a unit, a squad can promptly escape and shoot the beast to death with their specialist guns in the ensuing turn. This also allows assault units to get out of combat on their terms at the end of the enemy assault phase, allowing them to massacre the majority of another unit at a whim. The potential uses of this special rule across the army are simply limitless.

Experience and many trials have led to competitive army lists for each of the Chapters, and they usually revolve around a strong core of units unique to each list. This is the beauty of the Space Marine codex; so many units are affected in a staggering number of ways by the different Chapter Tactics, improving their viability exponentially based on the choice of army. For White Scars, I have listed three units that pop up in many of their builds in some form. Please be aware that these aren't necessarily the strongest units available to White Scars or the ones that receive the most benefits from their Chapter Tactics, but some of the most common that I have seen.

Kor'sarro Khan - While Tigurius is easily the best HQ - and probably the best unit - in the codex, he does have a close competitor in the form of the Khan. With good melee capabilities and the option for a Bike that no other Unique Character shares, Khan is a cheap and strong HQ before one even mentions his best trait. Regardless of whether he is your Warlord or not, Khan provides his detachment with the Scout special rule provided they are either mounted on Bikes or have purchased Dedicated Transports. For any army, this is a serious boost, with a "free" movement phase ranging from an extra 6" to 12" on your earlier deployment. This can help Tactical Squads in Rhinos, Honour Guard in Land Raiders and so on get closer to their preferred disembarkation point (optimal shooting or assault range) a turn earlier, but the biggest boost goes by far to Bike units. Bikes are Relentless, and can carry 18" ranged Grav Guns that devastate anything short of hordes. Give those Bikes Scout. Watch the carnage that ensues on the first turn of any game, from slaughtering Wraithknights and Riptides to obliterating Wave Serpents and Land Raiders. Khan makes all of this a much quicker process, reducing the usual time needed for the mostly medium to short ranged Bike units to unleash holy devastation.

Bike Squads - Where do I start? Bikes are a signature unit of White Scars, alongside Land Speeders, Assault Squads and pretty much anything that moves 12" a turn while still retaining full combat effectiveness. Even without White Scars Chapter Tactics, Bike Squads are generally the Troops choice - if you unlock them in that slot - that is best suited for dealing with the Tau and Eldar heavy meta. They are incredibly cost-effective, durable, mobile enough to launch early assaults, and pack a lot of punch. When you add White Scars into the mix, their Jink saves improve by 1, they ignore Dangerous Terrain tests and thus lose any reason to not move through terrain, they get Strength 5 Hammer of Wrath attacks and can be given Scout from the cheap HQ option Kor'sarro Khan. To put it simply, they become by far the most dangerous and effective Troops choice in the codex, and one of the best to be found in the game. They should almost always form the core of competitive or themed White Scars army lists.

Command Squads - Finding the "elite analogy" to regular Bike Squads might not seem too simple, with Attack Bikes filling a different niche altogether as cheap, suicidal heavy weapon delivery units, but Command Squads stand out for that purpose. Unlocked by a Captain-equivalent HQ choice - such as the Khan - Command Squads are effectively "special weapon teams" that can carry the crazy good grav guns while mounted on Bikes, the latter of which is a surprisingly cheap option for the squad. They give you massed special weapons on Bikes, up to five as opposed to the flat two for Bike Squads. This is basically their selling point, but when you give them grav guns in particular, it is one that many Space Marine players - White Scars or no - would love to have. The Chapter Tactics with boosted Jink saves and so on serve to give a very high value unit much better survivability against AP3 and AP2 shooting.

As the most cost-effective Troops choices in the codex, any army list built around Bike Squads will always be stronger than average. When you give those units severely increased durability against armour-ignoring weapons, the ability to ignore dangerous terrain, and the option to leave combats almost at will, it is no surprise that many of the most competitive Space Marine lists are White Scars armies built around Bikes. It is, after all, their speciality. Add in other Bike-mounted units and fantastic value commanders such as Khan and you have yourself a simple, tournament-worthy army list that is also fully themed!

While this army list can certainly be considered "cookie cutter", it nonetheless remains a fluffy list - if you feel it is too spammy, feel free to change the weapon options on the Bike Squads, drop the Attack Bikes or even some entire squads to take units such as Land Speeders and Assault Squads that fit really well into the list. Getting back to what this particular list does though, it offers something no other Space Marine list can; forty-two scoring bodies with Toughness 5, 3+ armour saves, 4+ Jink saves, 12" movement, twin-linked bolters and all while ignoring dangerous terrain tests. It is flat out brutal, especially as each of those six scoring units provides two grav guns and a multi melta allowing them to effectively handle any unit in the game - even hordes will fall under their twin-linked bolters and Strength 5 Hammer of Wrath attacks! The list might be light on models, but it is crazily durable, hilariously mobile with every unit having Scout owing to Khan and minimum 12" moves, while the firepower is ridiculous and the melee capabilities above average for Space Marines. Add in a Chapter Master with the Shield Eternal and a Thunder Hammer, and you have yourself a Command Squad that just flat out will not die. The Chapter Master is the Warlord - why would a Captain lead an army instead of a Chapter Master? - and is there to tank wounds for the Command Squad and Khan, while being a crazy good melee beat-stick in the process. This is a very strong core for any army list and should be used as a basis for most competitive White Scars army lists.

I hope you enjoyed the second in a series of seven articles covering each of the distinct Space Marine Chapters represented in the 6th Edition Codex: Space Marines! The White Scars are the ferocious hawks of the Adeptus Astartes, warriors possessed of such ferocity and vigour that their swift, brutal assaults are some of the most infamous across the galaxy. When the horns of war are called, none answer it quicker than the legendary sons of the Great Khan, for they are the true masters of mounted warfare. I hope this article helped you to better understand how to use the controlled savagery of the White Scars in the name of the Emperor!

For more discussion on White Scars and other Space Marine Chapters, visit the forums over on +Bell of Lost Souls or view our Space Marine Tactica series. Have a lovely day! Eel out.