Hello there everyone and welcome to my latest addition to the newly introduced Ork Tactica series! I am glad to be reviewing the notorious self-styled King of the Freebootaz, Kaptin Badrukk - a Warlord that puts even the venerable Kaptin Bluddflagg to shame, poncy hat and all! While I'm not so much sold on him as a replacement to a standard Ork Warboss built competitively, Badrukk is nonetheless arguably the best of the ranged HQ choices and fits perfectly into an army list featuring numerous gun-toting infantry choices. 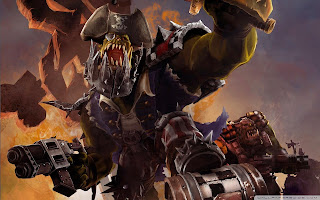 It is a curious day indeed when one has to cover an Ork character that prefers the deafening roar of the heavy guns to the brutal cries of death and slaughter wrought by a bloody melee, but that is the beauty of Kaptin Badrukk. With one of the best pirate hats ever sculpted on a Games Workshop model, the rules definitely need to be superb to match the aesthetic pleasure Badrukk offers; for the most part, I feel he is a decent albeit not great choice. The profile is more in line with a slightly improved Nob (or Flash Git) for the most part, excusing the extra base attack, slightly higher Weapon Skill and Leadership 9 equivalent of a Warboss. Strength and Toughness 4 with two wounds and only a choppa for close combat means Badrukk is generally more fragile than a Warboss and nowhere near as damaging in a melee - though six Strength 5 attacks at Weapon Skill 5 and Initiative 3 on the charge is decent - but like any Flash Git, the advantages come from his snazzy equipment. Badrukk has the best saves possible for an Ork overall accounting for all incoming attack types with a 3+ armour save and 5+ invulnerable save owing to his Goldtoof Armour while he also bears one of the nastier ranged weapons available to a character, firing three Strength 7 AP2 shots at a respectable 24". That Da Rippa has Gets Hot is virtually a non-issue seeing as Badrukk has a 3+ armour save and access to up to three ammo runts - making him the only Unique Character in the codex to have access to any kind of options - while his Gitfinda maximises his ranged damage output by boosting his Ballistic Skill to a more manageable three provided he remains stationary in the prior movement phase. A Bosspole is a nice little extra but obviously unnecessary when Badrukk is placed in a Flash Gitz unit seeing as the entire mob packs them into their base cost.

Overall, Badrukk provides some nasty medium ranged firepower (for an Ork) with guaranteed AP2 shooting making him a hugely useful addition to any number of the shooting-oriented infantry choices, while he is effectively a slightly boosted Nob lacking any upgraded melee weapon in a brawl. He is surprisingly survivable due to his guaranteed Kunnin' but Brutal Warlord Trait when paired up with his good saving throws, making him a potentially better Warlord choice than some of the generic HQ models, while he is also one of the only units in the slot that natively fits into a 'gunline' build. Ultimately, however, the fact that he costs just as much as basic squad of five Flash Gitz and doesn't offer all that much over them other than being quite a bit more survivable and a better overall ranged weapon that is still mounted on an inaccurate platform makes Badrukk a good choice if you want to heavily invest in Lootaz, Shoota Boyz, Flash Gits and so on, but mediocre in most other list variants. His lack of any significant melee presence relegates him to a backfield or midfield role, while his cost compared to a tooled out Painboy or Big Mek and lack of any actual support capabilities other than potentially acting as a wound tank - albeit a risky one at that with only two wounds - mean he isn't the stock competitive choice to act as a secondary HQ option. When you consider that a fully equipped Warboss with Da Finkin' Kap or Da Lucky Stikk is not only a much better "leader" for an army in terms of providing useful benefits to his forces while also being a devastating melee character, Badrukk's mediocre ranged damage output due to his inaccuracy limits his competitive usage. However, it is hard to really complain about Badrukk seeing as providing reliable AP2 shooting can be a life-saver given that Orks typically find themselves lacking in that regard, so at the very least he does have a place in an environment where Riptides or - god forbid - Terminators are common.

While Badrukk isn't necessarily at his best when moving seeing as he can't make use of the important Ballistic Skill 3 upgrade provided by a Gitfinda unless he remains stationary, the 24" range of Da Rippa means that he will generally have to be used in a more aggressive objective-taking unit to make the most of it. Ideally he wants to be in a Trukk, Battlewagon or other transport with a mid-table objective-taking unit such as a decent sized mob of Flash Gitz or Shoota Boyz. The Open-Topped classification on whatever transport he may use can also be useful just so both he and his unit can shoot without having to sacrifice their protection in the mean-time, but generally you will usually be speeding up to your chosen target or location in the early turns of the game anyway. Ammo Runts are fine choices to add to Badrukk to ensure he doesn't suffer wounds from Gets Hot and doesn't completely fluff his rolls on a given turn, though of course his Kunnin' but Brutal Warlord Trait and handy 3+ armour save guarantee he will almost never suffer wounds from Gets Hot anyway. Generally you want Badrukk in a unit where his medium (in the context of the Ork codex) 24" range on Da Rippa won't be wasted seeing as that plus his good saving throws are the main attractions here, meaning he makes the perfect addition to a meaty unit of Flash Gitz.

The Ork equivalent of pirates prove to be a decent bodyguard with two wounds per model, while the random nature of their Snazzguns allows Badrukk to step in and ensure the unit at least has some AP2 presence. Alternatively, a "gunline" Ork list featuring insane amounts of Lootaz, Mek Guns and other nasty long-ranged heavy hitters will often feature Shoota Boyz and Flash Gitz as the shorter ranged, more tanky (in terms of points per wound) mobs to clean up whatever manages to wade through the raging torrent of fire. In this scenario, Badrukk will also make a great addition to Lootaz and other such long-ranged units because this kind of list will often force your opponent to come to them, particularly in the case of Space Marines and most other typically medium to short ranged forces. Ultimately, it's difficult to go wrong with Badrukk as he is still decent enough in a combat with a re-roll on his 5+ invulnerable save and five Strength 4 attacks base at Weapon Skill 5, though he is undoubtedly at home in the Shooting Phase. As for preferred targets, anything with a 2+ or 3+ armour save that Ork shooting often bounces right off of are Badrukk's favourites, particularly annoying Riptides that usually prove very difficult to stop outside of close combat for a pure Ork army list.


Thanks all for reading my review of Kaptin Badrukk! I'm a firm believer that the generic HQ options tend to be preferable to their Unique counterparts, but one advantage the Ork codex has is that almost everything is viable in some form and this remains true of the greatest Flash Git ever. I hope you found this article to be useful to your efforts as an aspiring Ork Warboss, and I look forward to hearing your thoughts about this iconic greenskin!
at 9:06 pm