Happy late Easter everyone; I hope you all enjoyed your holidays and got some nice chocolate hobby to celebrate the occasion! If your eggs were nice and large then surely you should enjoy this final installment in my Dark Eldar Unit Overview series as I have elected to cover the Heavy Support section today. Talos - If the price of this model seems out of whack when placed next to the recently updated Necron Tomb Spyder, don't be fazed; nothing in the game is that stupidly cheap, and the Talos actually has points-congruency with the Eldar Wraithlord anyway. With that said, this thing is definitely your go-to monstrous creature for Dark Eldar if you need something smashed to death; Weapon Skill 5 with 4 base attacks due to possessing two close combat weapons makes it quite nasty, especially with Strength 7 and native AP2 melee attacks. It is reasonably survivable given its' cost with three wounds at Toughness 7 and a 3+ armour save backed by Feel No Pain (5+), while being both Leadership 10 and Fearless allows it to sit tight in an unfavorable close combat. It lacks assault grenades which can be a big detriment to a melee-oriented monstrous creature, though otherwise Initiative 4 is pretty decent for a model of its' class. The various weapon options all add to the Talos' firepower and combat prowess moderately with even the stock twin-linked splinter cannon being a decent weapon to keep. The choice between the chain-flails and ichor injector isn't too easy and ultimately will depend on whether or not you expect to face lots of monstrous creatures and gargantuan creatures wherein the latter becomes the obvious pick. The liquifier gun is avoidable, though each of the other ranged weapons is recommendable; I prefer the heat lance and haywire blaster for the additional anti-tank shooting myself. Generally speaking, the two main changes to this unit between codices are that it no longer has random attacks and that it can be taken in units of up to three; the former makes it a far more reliable combatant, while the latter gives it much of the same luster as Tyranid Carnifex broods. Cheap monstrous creatures with nasty melee and ranged punch in numbers make for a great line-breaking unit and foil for the rest of an otherwise fragile force, and this is where Talos' excel even if they don't really fit into the standard "mounted" competitive builds for the army.

Cronos - Essentially a Talos with weaker offensive stats but identical defensive stats, the Cronos is intended less as a damage-dealer and more as a support monstrous creature in a similar vein to the Necron Tomb Spyder. This isn't true if you use its' standard Spirit Syphon or the upgraded Spirit Vortex, each of which are Strength 3 and AP3 weapons that use either blast or flame templates, though if you take a Spirit Probe then it certainly does. This particular upgrade provides a +1 bonus to Feel No Pain saves for all friendly Dark Eldar - though one thing to keep in mind is that it only works for units that already have Feel No Pain - which is obviously tremendously useful for an army that gets almost army-wide Feel No Pain from the Power from Pain special rule. It synergizes perfectly with the fact that you can now take both Cronos' and Talos' in squadrons; you need only give one Cronos a Spirit Probe in a unit of three for all of them and other surrounding units to gain the benefit. Otherwise, the Cronos works as a discount Talos that isn't nearly as good in combat and nor does it really pack the same ranged punch; AP3 ranged weapons are nice enough, but Strength 3 on either of them is a turn-off. My advice is to take squadrons of two or three, give one the Spirit Probe and keep the other(s) bare to save points. If you aren't taking them to save points or get a Spirit Probe into your roster then I probably would just spend the extra points to get Talos' instead, but Cronos' do become almost mandatory in the types of lists built around such units because of the Spirit Probe. A note I'll leave here about both the Talos and Cronos is that while they did increase in points, the added option to run them in units in addition to the various stat boosts and the fact that they always have Feel No Pain makes them more than justified at their respective points costs'.

Ravager - As much as many Dark Eldar players cried out in irritation and confusion at the points increases made to both variants of the Ravagar based on its weaponry while also removing Aerial Assault, I don't really think there can be any complaints about those particular changes in the context of 7th Edition. Skimmers have been buffed tremendously since the 5th Edition Dark Eldar codex was released while Ravagers even gained the innate ability to Deep Strike, while being an open-topped vehicle isn't nearly as scary as it was in previous editions. The loss of Aerial Assault isn't such a massive blow considering a Ravager can still fire all three of its weapons when it moves 6" or less, while the points increase is 10 points for the less common disintegrator cannon variant and 20 points for the much more popular dark lance variant. While many will probably still just use the Ravager as a "lance boat", this does give players more reasons to field them with disintegrator cannons which I do appreciate. Ultimately, this is still the long-ranged death-dealing machine of ages past and serves as one of the most efficient anti-tank units in the codex, something that you almost always want as a Dark Eldar player where maximizing your firepower to cost is the name of the game. A minor points increase and the removal of one unnecessary but handy special rule isn't enough to stop this keeping its' place as the top unit in the Heavy Support slot.

Voidraven Bomber - While my review of the Razorwing was glowing, one needs to consider relative value and firepower between the two different flyers to appropriately establish why the Voidraven just isn't as useful as its' less expensive cousin. The paired Void Lances and Void Mine give it some nasty punch right off the bat, but consider that a Razorwing at 20 points less gets two Dark Lances, a twin-linked splinter rifle and four monoscythe missiles. The difference between Strength 9 and Strength 8 on a Lance weapon is big but not so large as to justify such a price differential, while I can assure you that four Strength 6 AP5 large blasts are going to do a heck of a lot more work than a single Strength 9 AP2 large blast in the current competitive meta. That's before one even mentions that the Voidraven naturally has to get close to its prey to use the Void Mine whereas a Razorwing is more than happy to sit back and out of range of medium and short-ranged Skyfire weapons. The stock Voidraven sits at a fairly high entry point and its various missile upgrades are exorbitantly priced so as to be absolutely unfathomable to recommend, while the firepower really isn't much of an improvement - if any is had at all - over a less expensiv Razorwing. It isn't a bad choice by any means, but it certainly feels second rate next to its older and less "flashy" cousin. 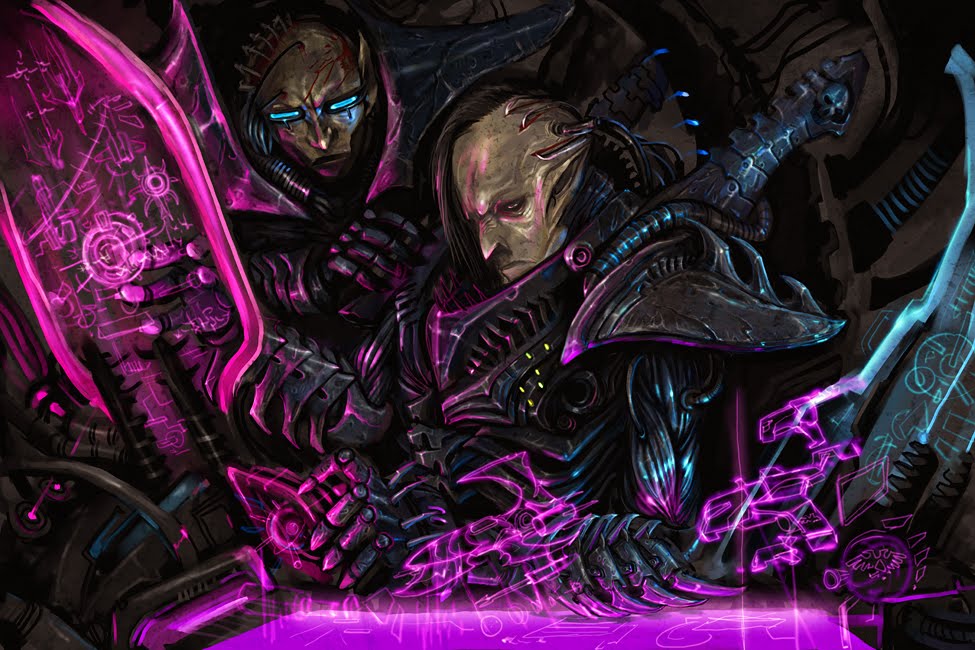 Thank you all for reading this final article in my short yet hopefully sweet Dark Eldar Unit Overview series! I'm excited by the recent run of codex releases and feel a positive trend has emerged with 7th Edition codex design, even if some of the earlier codices weren't all that special. If you have any criticism or other thoughts to share, please leave them in the comment section below; I greatly appreciate all feedback!
at 7:50 pm