Greetings all and welcome to my newest article for the Space Marine Tactica series! Today I will be focusing on the famous Ultramarine special character Antaro Chronus; he is the quintessential tank commander character of Warhammer 40,000 - even if his in-game exploits cannot match that of Knight Commander Pask - and got a juicy update in the latest codex to boot. Hopefully you find some measure of entertainment or insight here! 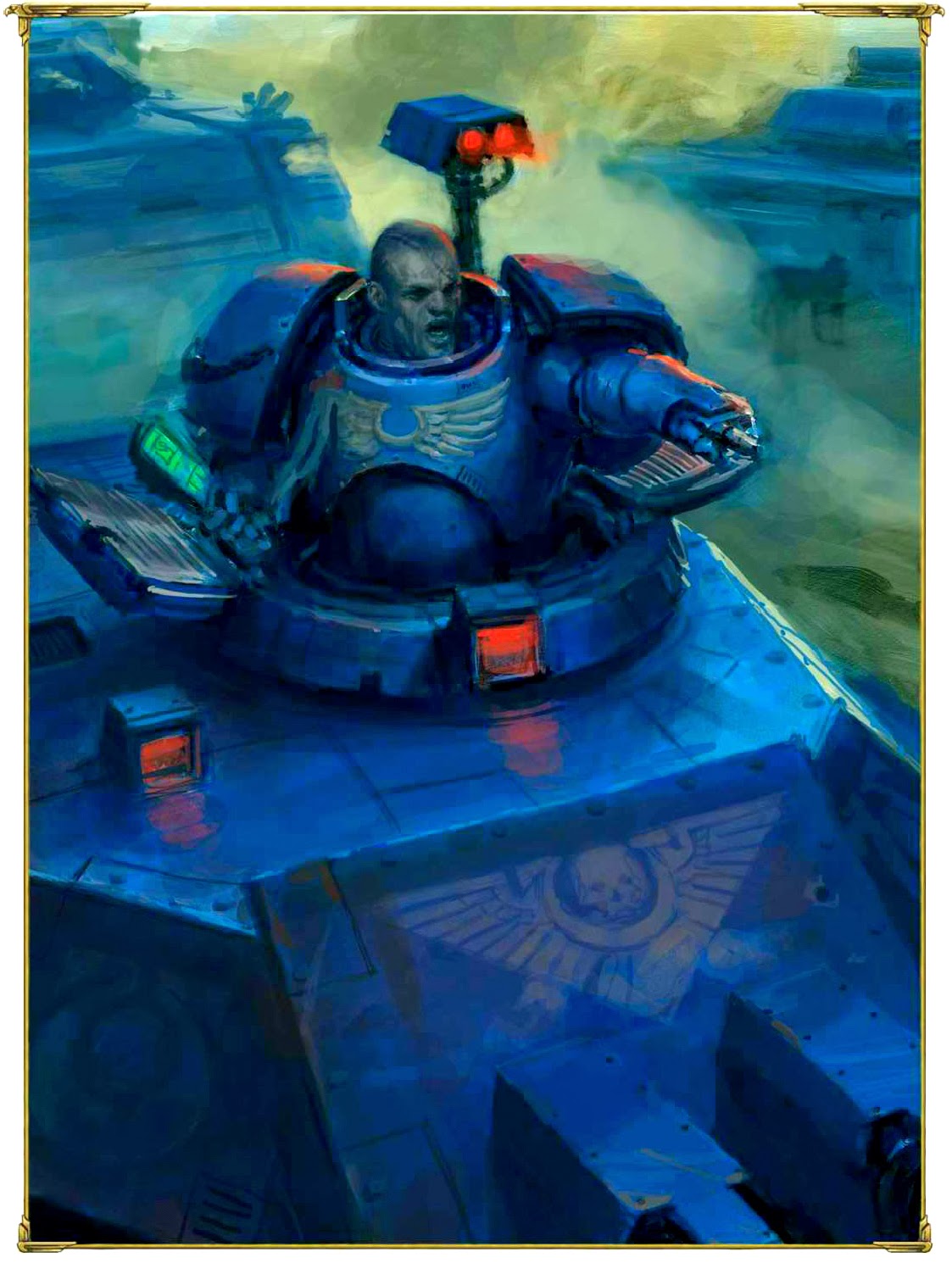 The "Spear of Macragge" has a fairly short list of abilities to provide a Space Marine army, but they are nonetheless highly valuable in the right circumstances. As a Tank Commander, Chronus is purchased first as a cheap HQ choice and then added to any single vehicle in your army from a wide list; essentially, any vehicle that isn't a flyer, Drop Pod or Land Speeder variant is a possible recipient of Chronus' talents. He then becomes a part of the vehicle and is essentially treated as a passenger that doesn't eat up a transport slot, providing his chosen vehicle with his improved Ballistic Skill 5 - perfect for any vehicle featuring heavy firepower such as a Predator or Stalker - and the It Will Not Die special rule, turning armored behemoths like Land Raiders into nigh unstoppable war machines. He also allows his vehicle of choice to freely ignore both Crew Shaken and Crew Stunned results to ensure they are almost always firing at full effect, making him ideally suited to high value units like the aforementioned Land Raider variants (as this is particularly useful for transports) or Predators.

Unlike most other Tank Commanders, Chronus even has rules for when his vehicle inevitably suffers unwanted destruction; he immediately disembarks from the vehicle as if he were making an Emergency Disembarkation and is then treated as a separate model for the rest of the game. This means that preserving his points in a game that uses either Kill Points or features him as the Warlord is generally easier than it would be for other Tank Commanders, especially as he can easily hide near his freshly obliterated ride as long as it didn't suffer an Explodes result on the vehicle damage chart. On foot, Chronus is about as unremarkable as you would expect; he is essentially a two-wound Tactical Marine Veteran Sergeant that lacks a boltgun or close combat weapon, though the bare minimum load-out of bolt pistol, frag grenades and krak grenades are thankfully present. What is interesting to note here is that Chronus is equipped with a Servo Arm that allows him to somewhat defend himself in a melee and repair friendly vehicles, though as he lacks the Blessing of the Omnissiah special rule he is not very efficient in the latter role. In terms of special rules, Antaro has only what is required of a Space Marine; And They Shall Know No Fear, Chapter Tactics and - thankfully - the Independent Character designation which allows him to potentially join up with nearby squads and lend them some handy if unimpressive assistance. The Ultramarines Chapter Tactics do little to improve Chronus' already minimal damage output as it seems clear he doesn't pass the rule on to whatever vehicle he crews. Be aware that Chronus can be your Warlord - and technically his vehicle can be the Warlord itself! - and this can give him some interesting bonuses, but generally I don't see any major stand-outs for him aside from the obvious ones that are good in general. 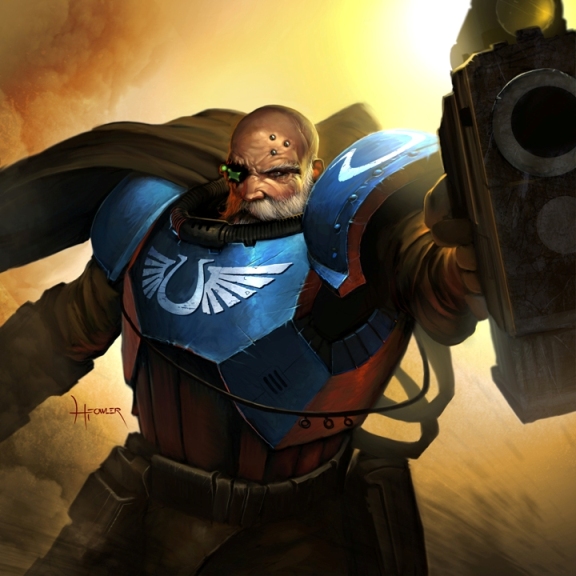 This one is a bit confusing in the context of Chronus joining up to various different tanks, something I will address in the Best Uses section; here, I can instead focus on deploying Chronus optimally. Given how much Chronus adds to the points cost of a vehicle it almost goes without saying that you want to protect it more than usual given that he also provides some very nice overall buffs to his ferry as you would expect. This means he is ideally suited to vehicle squadrons for units such as Predators where can sit in an optimal position at the back or middle of the unit to prepare for whatever threat may assail them - whether arriving from the flanks or striking them head on. In the case of transports such as Rhinos or Land Raiders, you should be prepared to play more aggressively and take risks to get the full benefit out of Chronus; ignoring Crew Shaken and Crew Stunned is a godsend for any transport, allowing you to deliver high value units to where you need them relatively easily compared to those that lack Chronus' touch. Still, be sure to make use of obscuring terrain and units where possible as throwing Chronus' highly expensive vehicle away willy-nilly is a recipe for disaster given that he can accomplish very little once he is forced to disembark.

As mentioned prior, I'll give my thoughts on each individual vehicle option available to Chronus here;

Rhino - Don't do it, just don't. Spending almost double the points of the base transport itself to give it upgrades it will almost never make use of is a waste of time.

Razorback - I have a similar feeling about this as the Rhino, but at least a Razorback has a gun that is sort-of worthy of Chronus' Ballistic Skill buff. Still, this isn't really worth using Chronus for.

Predator - If you want to make full use of Chronus' Ballistic Skill 5, this is probably your best bet given that the majority of weapons available to a Predator lack Twin-Linked and the vehicle itself is much more durable than the Rhino-chassis transports.

Whirlwind - Considering that the main point of a Whirlwind is to sit out of sight and lob artillery shells at enemy infantry on a cheap fragile platform, I feel Chronus is wasted here. The possible exception to this rule is if you field a full squadron of Whirlwinds, particularly in their formation; the way in which Multiple Barrages work makes Chronus' improved accuracy worthwhile, albeit with the  disclaimer that they then require line-of-sight to their target to get that bonus.

Vindicator - While the buffs are theoretically great for a Vindicator, I find this is a vehicle that tends to be suicidal in nature; it maybe gets a shot or two off and dies immediately, something that none of Chronus' advantages can change.

Hunter - Upping the Ballistic Skill of this dedicated anti-air platform is a godsend given that it can only fire one-shot per turn with its main weapon, but even so the Hunter pales in comparison to the...

Stalker - The superior variant of the anti-air tank kit for Space Marines with the high rate of fire and equal Strength being far more useful than Armorbane and AP2 for flyer or skimmer hunting, while the extra shots are in a sense even more valuable than a single shot with Ballistic Skill 5.

Land Raiders (Godhammer, Crusader, Redeemer) - If you want to use a Land Raider with an expensive unit inside, you may as well fork out the extra points to get Chronus as ignoring Crew Shaken/Crew Stunned while gaining It Will Not Die are awesome buffs for these leviathan transports. Of course, putting so many eggs in one basket that isn't nearly as efficient as any proper death-star the book can put out isn't exactly an efficient use of points. I feel the Crusader is the best bet for Chronus not only because it is the best codex variant, but the high rate of fire weapons naturally line up with his improvements.

Thank you all for reading this article, I hope you enjoyed it! Antaro Chronus is an interesting addition to a Space Marine list, though with how easily vehicles seem to get destroyed nowadays if they aren't of the Super Heavy classification I definitely feel Chronus doesn't have nearly the same utility as another cheap character like Sergeant Telion. In any case, I would love to hear your thoughts on the venerated Tank Commander and hope you have a great day!


The roar of engines, the recoil of cannons. That is where the true joy of battle lies.
- Antaro Chronus, Brother-Sergeant of the Ultramarines
at 10:07 pm