To the Emperor, reverence. To the Imperium, glory. To the Black Templars, fear. Perhaps the most terrifying of all the Adeptus Astartes are the Black Templars, a Chapter only in name that is beyond the creed of mere humans and answers only to their own pious blood-lust. Matching even the infamous World Eaters for sheer ferocity and tempered by an unparalleled dedication to the God Emperor, the Black Templars are a leviathan beast tamed and directed by their greatest leader, the High Marshall himself; Helbrecht. I hope you enjoy this review of the legendary crusader! 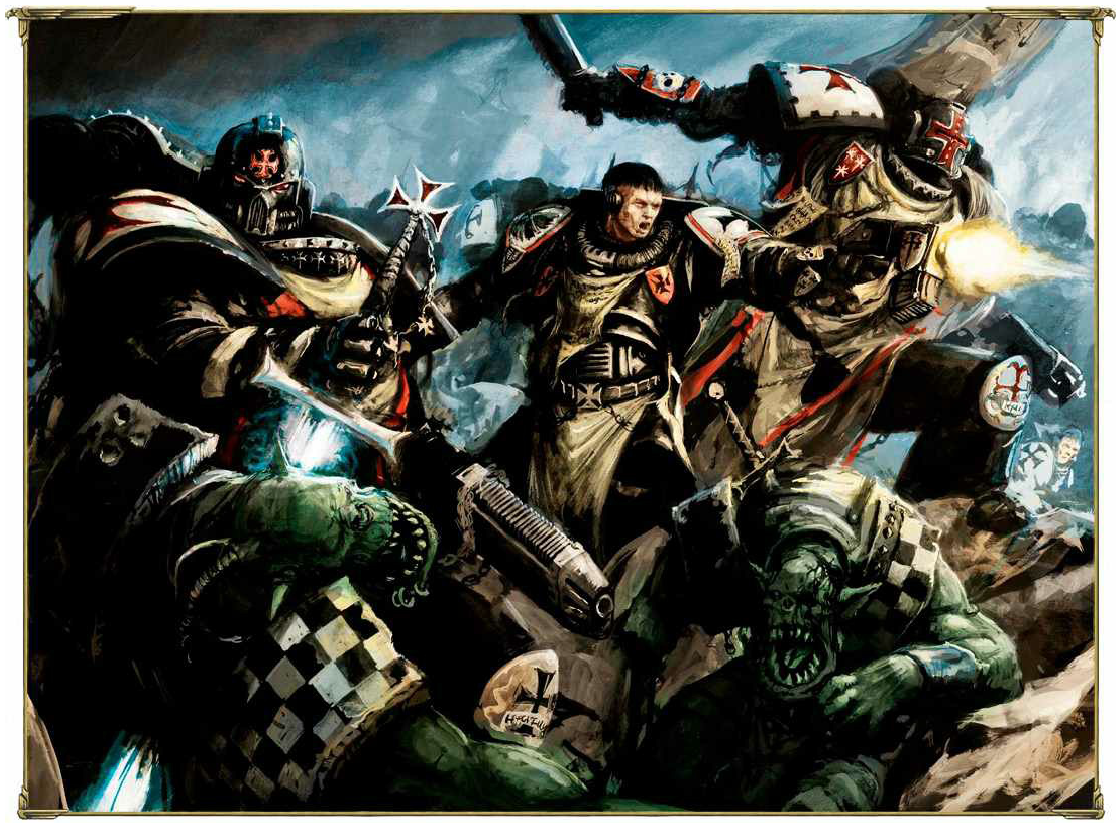 It should come as no small surprise that Helbrecht has a profile in keeping with that of a Chapter Master and thus is a powerful individual model in his own right when compared to characters from other codices. This entails a powerful base profile and some strong equipment choices, but what is unusual about Helbrecht is that he ultimately fails to replicate the power-house melee capabilities of other Chapter Masters despite his character background suggesting that the opposite should be the case. Weapon Skill 6, Initiative 5 and 4 base Attacks are always good to have, and base Strength 4 isn't necessarily bad either as it can often be augmented or otherwise worked around by focusing on lesser enemies. His unique melee weapon provides him with D3 bonus attacks on the charge and is Master Crafted but otherwise functions identically to a standard power sword, providing Helbrecht with a plethora of Strength 4 AP3 attacks. While he can certainly cut down medium to lesser armored foes with little difficulty, anything with high Toughness or 2+ armor saves will prove incredibly resistant to his strikes and must be given due caution as a result. His unique Warlord Trait, the Imperium's Sword, provides a solution to this problem even with the caveat that it is temporary; once per game, Helbrecht and his unit can benefit from the Furious Charge special rule for one turn that they charge in and thus elevate his four to seven attacks to be resolved at a much more deadly Strength 5 AP3. Knowing when to use this ability is crucial as it can easily make the difference between a failed or successful assault result, especially when dealing with monstrous creatures or opposing dedicated melee squads and characters. Tying into that particular one-use-only ability, Helbrecht offers an army-wide buff that also works only on the single turn that it is called; declaring a Crusade of Wrath, Helbrecht and all friendly Black Templar models (these do not all have to be in the same detachment) gain the Hatred and Fleet special rules - providing re-rolls to-hit in close combat and re-rolls for both run and charge moves, respectively. As you can imagine, this is a fairly powerful boost to an armies' melee damage output and consistency with making charges, so using it when you can set up numerous charges and combining it with his Warlord Trait is only logical.

Helbrecht is armed with a token combi-melta that allows him to pop off a single anti-tank shot in any given shooting phase which can be fairly useful given that he is Ballistic Skill 5, but ultimately it can't be expected to do much given that you can only make use of the melta component at one point in a match. Frag and Krak grenades round out his equipment selections and are much more useful for Helbrecht than they are for Pedro Kantor, what with his Initiative 5 attacks and lack of any tank busting capabilities in a melee. He can be joined to any unit as an Independent Character and can dole out the monumentally valuable special rule that is And They Shall Know No Fear, but otherwise the other major point of note is his position as head of the Black Templar. He possesses both the Adamantium Will and Crusader special rules for boosted Deny the Witch rolls against any psychic power that targets himself or his attached bodyguards, while also gaining an increase of +D3 for any run or sweeping advance rolls he makes. His potential to benefit from Counter Attack or Rage at any given point dependent on an attached squad suffering casualties is another avenue towards bonus attacks in close combat, but disappointingly the latter of those two rules does not stack with his blades' own charge bonuses per the rules as written and is thus not that useful for a character that will usually be leading an army into glorious combat. Lastly, Helbrecht is at an acceptable level for surviving counter strikes with four Wounds, Toughness 4, a 2+ armor save and a 4+ invulnerable save. He can survive a lot of pain but must be kept away from anything that has a chance at inflicting Instant Death on him, bypassing his large amount of wounds. This does allow him to tangle with other tanking characters given that he will often out-damage them provided they aren't armed with Strength 8 or AP2 attacks, while his saves should keep him steady against most lesser foes. However, unlike Pedro Kantor - his Crimson Fist brother if you will given their Chapter lineage and that they represent both Alexis Polux and Sigismund - he cannot be expected to take on truly powerful foes and earn victory as ultimately he is suited more for slaughtering weak enemies with 3+ or worse armor saves that lack AP2 melee weapons, meaning dedicated combat units aren't really his targets of choice. As a final footnote, despite being a Chapter Master, Helbrecht disappointingly lacks the Orbital Strike wargear and is thus incapable of signalling for an Orbital Bombardment.

You can opt to place Helbrecht anywhere in a unit but generally you will want him towards the rear or center of a unit as I am sure you probably already guessed if you have read my other character reviews; the squad is usually less valuable than the character leading them, so using them to eat any unsaved wounds to keep him alive should be your most common tactic. Be sure to use his 2+ armor save and 4+ invulnerable save to your advantage whenever possible if he leads a unit that lacks one or both of those saving throws seeing as stopping the wounds entirely or losing a few on Helbrecht himself is often worth the trade-off of seeing other models be removed, but be wary of any type of massed AP2 or high Strength firepower that can quickly obliterate the Black Templars' High Marshall. Traditionally, Helbrecht belongs in a Land Raider Crusader alongside a suitably bedecked Crusader Squad or Honor Guard retinue that all benefit immensely from his once-per-game assault buffs; generally speaking, any trick you use to get him into combat against anything that isn't itself a powerful dedicated assault squad should be your main concern for Helbrecht. He's not quite as "point and click" in his application as Marneus Calgar as he can't bowl over Terminator equivalents and anything stronger than that, but most armies tend not to feature units of that sort and as such you should stick to the Black Templar methodology for deploying him; a speeding bullet aimed straight at the heart, or head, of the foe. 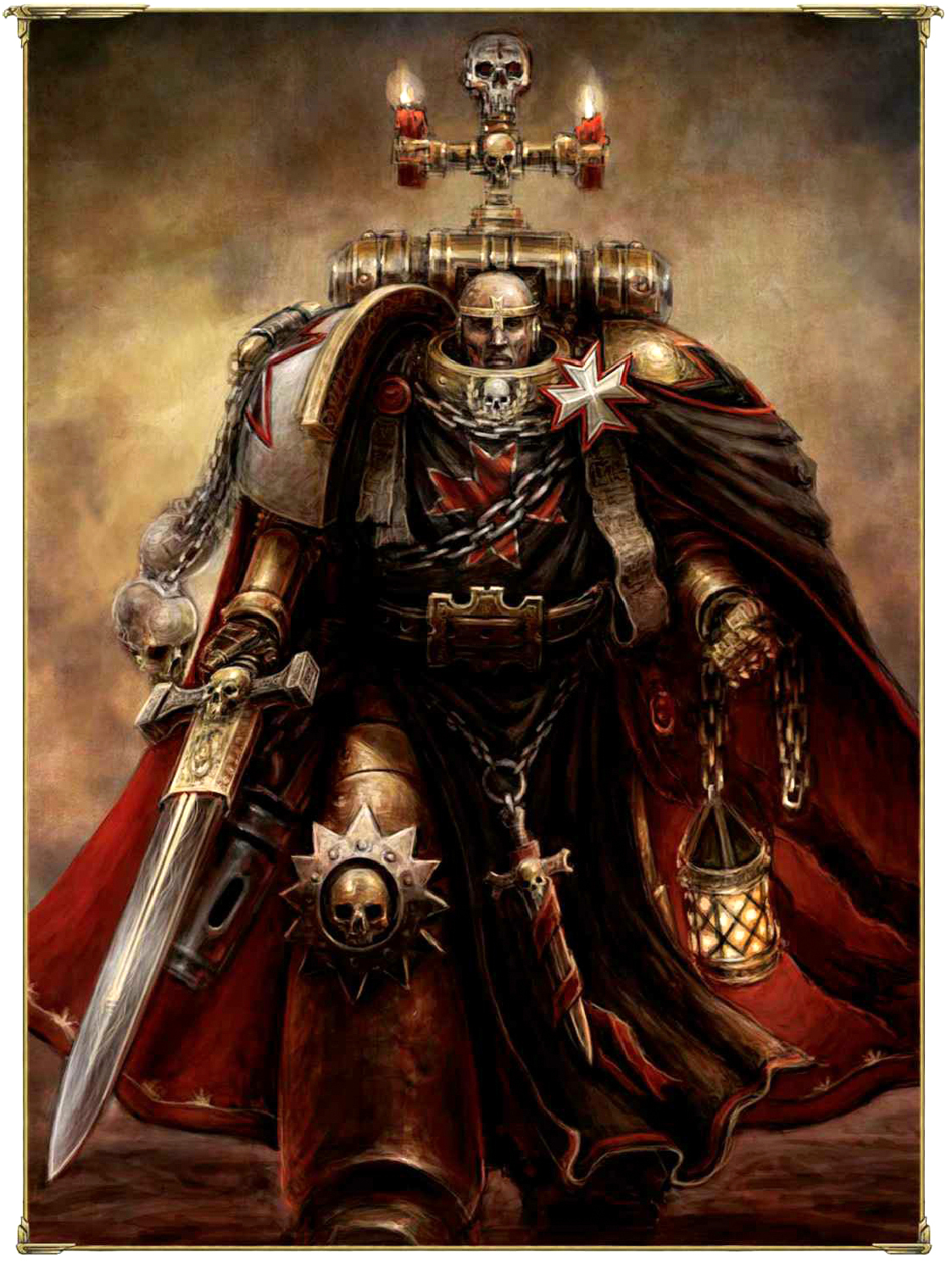 Helbrecht is geared towards slaughtering other Space Marines and non-elite infantry with his shockingly high number of AP3 attacks on the charge, and this is especially the case if one or both of his one-use-only charge bonuses are activated. Most characters can't stand against him, let alone any Chapter Master, so using that to your advantage is key; he belongs in a melee where he can wreak a terrible toll on enemy forces. While he's nowhere near as hard hitting per strike as other Chapter Masters usually are, he has a hell of a lot more attacks to work with (barring Pedro Kantor) and as such can be seen as the archetypal meat grinder. For reference, on a turn that he manages to charge and activates his Warlord Trait and Crusade of Wrath, he benefits from an average of six Strength 5 AP3 attacks at Initiative 5, re-rolling all failed to-hit rolls; that's a lot of dead models! Helbrecht is the natural leader for an assault-driven Black Templar force, though interestingly he does not need to be your army Warlord to provide his Crusade of Wrath ability which could allow you to look elsewhere for an army leader. Of course, spending so many points purely on melee beat-sticks when you could simply make-do with Helbrecht probably won't be worth it in most cases, but the option is nice in case you are more concerned with preserving the Slay the Warlord victory point while still using Helbrecht to his fullest death-dealing capacity. The most common build I can think of for Helbrecht to be a part of is lots of melee-oriented units in Land Raider Crusaders or some other type of highly aggressive assault force, allowing you to hopefully set-up a mass of simultaneous charges so that you can really get the most out of the Crusade of Wrath and his Warlord Trait.


Thank you for reading what should be one of the last reviews in my over-long Space Marine Tactica series; less than a handful of character reviews remain. Helbrecht is an impressive sight on the battlefield and especially so when he leads the full might of multiple Crusader squads in a glorious head-strong charge as is befitting of the Templar methodology. I hope you enjoyed the article and I look forward to reading your feedback of it, thanks again!


The galaxy is the Emperor's, and anyone or anything who challenges that claim is an enemy who must be destroyed.
- Helbrecht, High Marshall of the Black Templars
at 10:08 pm