Hey all, Learn2Eel here with yet another article looking at my super cool little skeletal buddies, the Necrons, and my experience with them so far in the realm of battle. Enjoy! 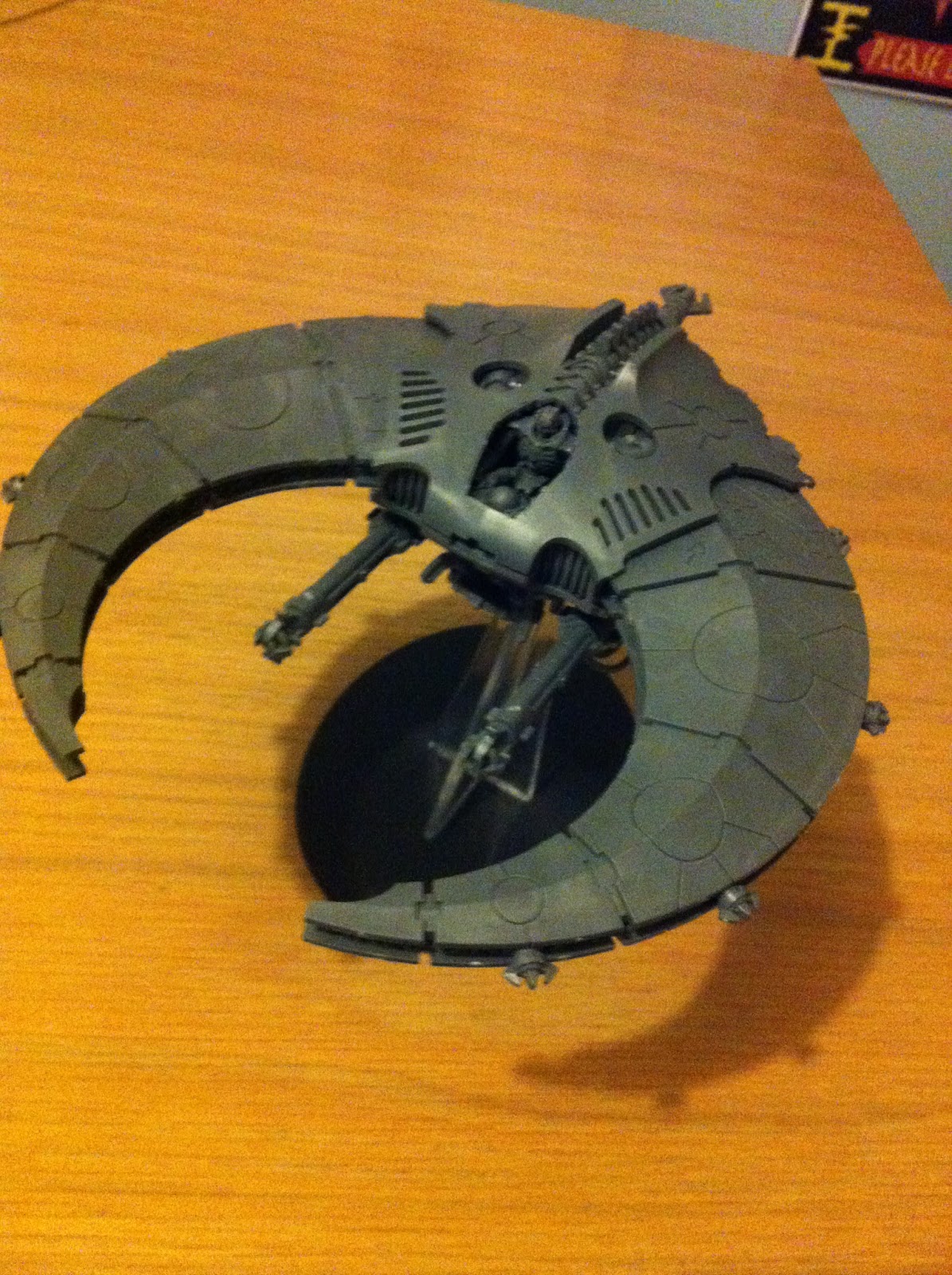 It has been a bit of a troubling past few weeks for my family and I, but there have been some positives; I love the new Tau, and my recently initiated Necron army is now a decent little force that I can employ. I grabbed a Night Scythe just yesterday so that I can at least play around with a cheap and nasty allied detachment composed of an Overlord and some Warriors in a Night Scythe backed by an Annihilation Barge - not bad at all! The Night Scythe was surprisingly easy to build, with fewer components than I expected and a very easy snap fit style; even when taking my time and observing some games in progress, it only took an hour to finish the model completely. It is yet another nice looking kit that fits on the flying stand much easier than the recent Heldrake models - and trust me, trying to place Heldrakes on their flying stands is a royal pain!


My first game came thick and fast after building the Night Scythe, with a store regular asking me for a 1500 point game as soon as he arrived. There really isn't much to say about the game, as it was horrifically one-sided; having allied in Chaos Space Marines, I ended up losing only thirteen Cultists and a Chaos Biker champion, whilst wiping out all but a handful of his Tactical Marines by the beginning of game turn four. My trio of Annihilation Barges backed by a Forgefiend armed with Hades Autocannons provided a literal torrent of mid-range, high strength firepower that his army simply couldn't handle. The Night Scythe didn't do too much, and my smart positioning allowed me to avoid a potentially fatal introduction from an Aegis Defence Line armed with a quad gun. Because I was looking more for a bit of fun than anything else, I also had my converted Abaddon (featured right) leading a horde of Cultists - I intend him to be a kind of reincarnation of Arkos the Faithless, using Abaddon's rules - through which he made combat and slew Chaplain Cassius and a Terminator-armoured Librarian. Not surprising really, given the Warmaster's prowess.

Given that the game wasn't too much of an indicator for the army as a whole, I can instead talk about one specific unit and just how amazingly effective it is - the Annihilation Barge. As has been noted almost anywhere you can find, a skimmer with the kind of reliable firepower it possesses on a tough armoured frame for less than a hundred points is absolutely ludicrous. Many would argue that it is the most under-costed vehicle in the entire game - short of perhaps the infamous 'Psybolt Rifleman' - and I am hard pressed to disagree. Firstly, front and side armour thirteen means that most heavy and special weapons players employ in 6th Edition - autocannons and plasma guns - can only glance them, unless they are backed by an initial penetrating hit from another, stronger weapon that usually has a shorter effective range. Given the small rear arc of the vehicle and its effective range of thirty inches when moving and firing its main gun at full Ballistic Skill, the chances of exposing its vulnerable armour facing is slim unless you have access to Outflanking or Deep Striking units. Against my opponent, sporting a number of Strength seven weaponry - including a Quad Gun - he failed to destroy even one Annihilation Barge, though he did reduce one to only a single hull point, and not for a lack of trying. He did have multi-meltas and meltaguns available, but my firepower and his mediocre dice rolls saved me numerous times; Jink saves on a vehicle with an armour value of thirteen is deceptively durable given their size. Of course, actually getting through an Annihilation Barge's armour will usually lead to an explosion - even a standard shot without AP modifiers has a 33% chance to destroy one. Of course, the cost of the unit is so low and their effectiveness so crazily high that one often will care little for their loss. That three of them provide so much versatile firepower for less than three hundred points is just the icing on the cake. The main gun has a twenty-four inch range and fires four twin-linked Strength seven AP nothing shots that, per the Tesla rule, generate two additional automatic hits for every 'six' to hit rolled. Given how effective Autocannons are in the current meta against lightly or medium armoured vehicles, a weapon that averages over twice the hits of a regular Autocannon and will typically be harder to remove is priceless. The only downside is that it has the half the range of an actual Autocannon, but given that it is twin-linked and the Annihilation Barge is a skimmer, mobility and firing on the move shouldn't be too much of an issue; it has the durability to survive those early turns whilst it advances. With the Tesla rules in effect, the Tesla Destructor is also a very nice anti-air weapon owing to its high rate of fire and re-rolls to hit, with ever six adding additional hits, meaning it averages anywhere between three and six hits against flyers at Strength seven; more than enough to force one to Evade!

I did have some fun with Vargard Obyron though, even though I didn't really have the models to do the tactic justice. This was in a separate "points are the limit" game outside of the store where there was no force organisation chart employed; just take what you can to fill out the points. Him and a squad of Necron Warriors deep-struck behind enemy lines and proceeded to wreck a nasty Vindicator with their gauss weaponry, proceeding to charge and wipe out some Tactical Squads with relative impunity through some protracted assaults. Though I haven't had too much experience with Necrons, I can definitely say that though they do mid-range firepower amazingly well and they are very tough for the most part - particularly given the quantum shielding and reanimation protocols special rules - their are lots of fun little tricks to employ that can be absolutely devastating. Five-man Necron Warrior squads with a lone Cryptek wielding a Voltaic Staff makes for a ridiculously cheap suicide squad - loaded in a Night Scythe to boost their effective range of course - that wrecks anything from Piranhas to Land Raiders in one volley on average. Using Nemesor Zahndrekh in a Catacomb Command Barge to sling-shot a large blob of Warriors or Immortals forward with the help of Vargard Obyron, owing to his Ghostwalk Mantle, is pretty nasty, even despite the maximum movement of twelve inches in the movement phase now. Though the first game is only but a taste, I am really looking forward to building up my Necron force - they are definitely a strong army no matter which way you go, barring perhaps a force composed heavily of Flayed Ones, which means they are very rewarding to a wide range of players and play-styles. Despite being a 5th Edition codex, I think Necrons exemplify all that is great about 6th Edition codices - a variety of competitive units and builds that can be made to fit a multitude of thematic styles. I'm very excited to complete the full Tactica for the skeletal legions, though it will probably have to be put on hold until I've pored through the Tau codex adequately. I hope it is up to standard - though I have little personal experience, I've observed them more than adequately, or at least, I hope so!

I'm hoping you enjoyed this article. Do you have any questions or critiques? Feel free to leave them in the comments section below!