Greetings everyone and welcome to one of the last remaining articles in this overlong Astra Militarum Tactica series - we've been going since bloody June and we still have at least another week or so left at this rate! Not only is it time to praise the Emperor for his benevolence but also to give thanks for the skies being so clean and fresh lately, that is if you discount all the burning wreckage constantly descending. About that, Hail Hydra! My puny attempt at a pop culture reference aside, Hydras are probably the iconic anti-air unit and the first ever introduced into Warhammer 40,000 (to my knowledge) with the stated goal of hunting all things airborne. I hope you enjoy this article! 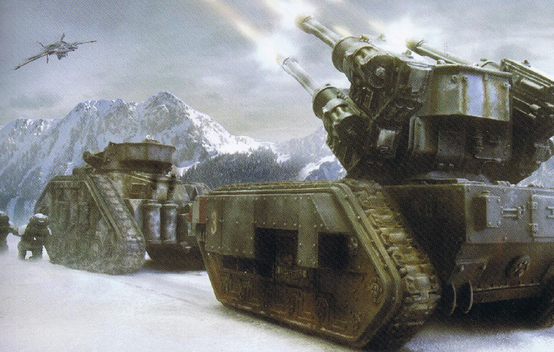 With the first proper plastic kit finally released for this grizzled old tank, famous both for its usage of the Chimera chassis and its status as the "original" anti-aircraft unit, Hydras were previously among the most devastating all-rounder units in 5th Edition Warhammer 40,000 with only Land Raiders and Monoliths being immune to its furious hailstorm. The release of 6th Edition subsequently culled its competitive usage considerably despite its status as a dedicated anti-air tool in the first ever rule-set to properly feature flyers, a somewhat confusing change of fortune for an iconic unit. While the change to Interceptor in 7th Edition did largely neuter most other anti-air units in the same way adding just Skyfire to the Hydra did, it nonetheless remains as more of a niche unit that is specifically designed to take down three unit types in particular. If you haven't caught on to what the Skyfire rule entails by now - and yes, it defines the Hydra and thus warrants this explanation - then it allows ground units to fire at full Ballistic Skill against zooming flyers and swooping flying monstrous creatures rather than be forced to rely on snap shots as normal. This means that a Hydra with its two twin-linked Hydra Autocannons is capable of hitting on 4s due to its Ballistic Skill 3 against either of those two unit types when they are zooming or swooping, respectively, though as the Hydra Autocannons themselves have the Skyfire rule this means any other weapon present on the Hydra tank will still have to fire snap shots at those targets as normal. With four shots at Strength 7 AP4 that should average three hits per shooting phase, that's not a bad deal at all when you consider that most aircraft are AV 11/11/10 or something to that to extent, excepting the Imperial and Chaos flyers of course, while the majority of flying monstrous creatures are Toughness 5 with 4+ or 3+ armour saves.

The damage output fits and makes the Hydra a decent aggressor against the units it wants to target, but the unfortunate side-effect of Skyfire is that it makes any unit bearing it almost useless against ground targets unless the unit has some kind of special rule - such as a Mortis Dreadnought or Mortis Contemptor - that allows it to choose either to use or not to use Skyfire in any given shooting phase. The Hydra, sadly, lacks this element of choice and is thus only really useful against all those flying units you seen, though thankfully even with some general tweaks in 7th Edition those kinds of units are all still very common - Tyranid flying monstrous creatures are soaring high right now, just as the various Xenos and Imperial flyers remain useful to capitalize on the vulnerabilities of unprepared generals. That Skyfire also allows the recipient to fire at full Ballistic Skill against skimmers makes the Hydra a bit more versatile than it would initially seem, meaning it can be a threat against at least one unit in almost every codex in Warhammer 40,000. The thinking goes that the Hydra is cheap enough to warrant an inclusion even with the removal of its Jink-ignoring unique special rule seeing as skimmers, flyers and flying monstrous creatures pop up in almost any competitive army list, and this is true for the most part if you consider that most of those units are incredibly susceptible to Strength 7 AP4 shooting.

The high Strength and colossal range are all nice, but there is one crippling issue for the Hydra that limits its usage considerably; as it lacks the Interceptor special rule, opposing flyers arriving from reserves will get the first shot and compromise its fragile AV 12/10/10 frame, much like flying monstrous creatures and skimmers all have the mobility and often the firepower to neutralize Hydras early in the game. Those units can afford to hide and zoom out of cover or simply bear the brunt of a Hydras' shooting attacks if they have cover saves seeing as the Hydra is incapable of ignoring cover saves, and then make full use of their unique movement and swiftness to counter-attack and destroy the relatively fragile Hydra. While the Hydra obviously can be hidden out of sight with its relatively medium to small sized model and then moved into position after a flyer enters from reserves or the target otherwise exposes itself, the problem here is that the Hydra is a standard vehicle lacking the Fast classification. Its Hydra Autocannons come in a pair of twin-linked weapons, meaning that as soon as a Hydra moves a single inch it is forced to snap-fire (the irony) with one of them - considering the whole point of the tank is to fire at full Ballistic Skill against flying units, this is a pretty significant in-game weakness that the "theory" side of tactics often fail to mention.

If you don't have suitable cover for a Hydra to occupy wherein it benefits from a save but does not provide one to its quarry (the high position of the guns makes this possible) preferably from a barricade or wall of some kind, it will either be left in a bad position and make for easy prey or be forced to spend a turn getting into a good position after its quarry has already arrived. In the latter scenario, it still makes for a suitable target for your opponent as unless you take multiple Hydras - squadrons are still fragile and the Heavy Support slots are very valuable, even with 7th Edition's unlimited detachments - or combo them up with Vendettas to cover all your anti-air needs, they are going to be in a spot of bother in some form or another. Some match-ups will also render them almost completely useless unless you count their searchlight, smoke launchers, hull heavy bolter and capability to ram enemies - certainly not the stuff of legends when you consider that almost every single Imperial Guard tank features all three of those equipment pieces. After all, not everyone wants to jump on the flyer craze post 6th Edition and in all likelihood this will also be a Space Marine or Imperial player, meaning there will be a distinct lack of skimmers to fire upon as well. While the Hydra is decent in theory, it struggles immensely in practice due to its inability to properly reposition against targets that will otherwise be able to perform an "alpha strike" on it, as well as its fragility compounded by the fact it will often be one of the few obvious anti-air units in an army list making it an easily identified and destroyed target. By the by, even if it can target skimmers, don't expect anything good against Wave Serpents - Hydra Autocannons might have the range advantage over the Serpent Shield, but Wave Serpents can easily survive your shooting and destroy your Hydras in turn. 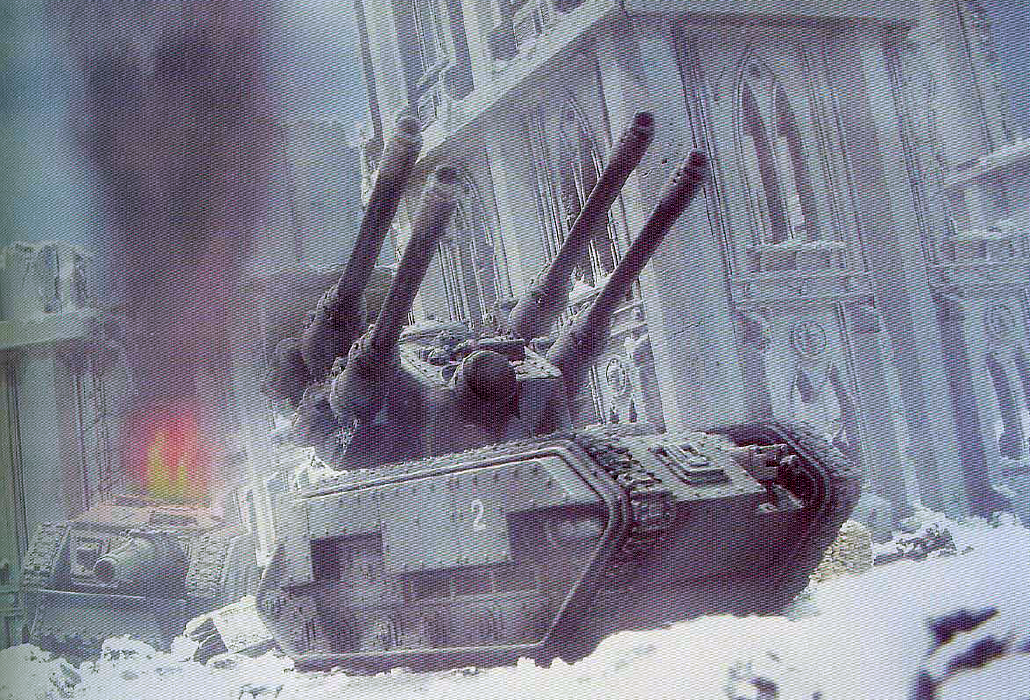 While some theorize that as the Hydra Autocannons have Skyfire rather than the Hydra itself one should replace the stock heavy bolters with heavy flamers to potentially deal with nearby infantry as desired - after all, it is a free exchange - I am not a subscriber to this belief. The usage of hull heavy flamers amounts to "here, have this tank" considering its tight 8" long template and having zero synergy with the Hydra Autocannons. Remember, a heavy bolter can still be used to fire snap shots at flying targets or fire at full Ballistic Skill at ground targets, making it the more versatile weapon and having a 36" range meaning it isn't completely useless for half or more of a game. If you are in a situation where you need to rely on a Hydra to clear out infantry that have managed to close within assault distance of it, the onus is on your actual Infantry Platoons, Leman Russ Eradicators and Hellhounds to clear them out, not a dedicated anti-aircraft tank that finds some use from a three-shot Strength 5 weapon. Other than that, seeing as this is a tank that should only move if it means keeping out of sight from a soon-to-arrive flyer to compensate for its lack of Interceptor, there are no worthwhile upgrades of note available to it. All increase the price of the Hydra and don't provide it with any assistance in its primary role, that of targeting and destroying flyers and skimmers exclusively.

The main issue I and other Imperial Guard veteran players have with Hydras is their complete lack of Interceptor throughout both 6th Edition and now 7th Edition, meaning that their main quarry in the form of flyers will have the first shot instead. For an anti-air tank that is AV 12/10/10 with three hull points, this is a pretty serious issue as the majority of flyers in the game have the mobility or firepower to either expose its side armour and neutralize it or destroy it regardless of which facing a flyer is presented with. This generally means either keeping the Hydra behind suitable terrain where the elevated position of its weapons will ensure most targets do not benefit from cover but the Hydra itself will given the low height of the actual chassis, or hiding it entirely out of sight of any possible attack so that it can move into sight and commence firing protocols when ready. I must state fully that neither tactic is entirely preferable seeing as unless one faces skimmers that begin the game on the board in sight of a Hydra, it will almost never get the first shot off against something worthwhile even when you consider its colossal 72" range. While four twin-linked Strength 7 AP4 shots are good against almost anything, that they must snap-fire at any target that is not a flyer or skimmer is a huge downside not only for the Hydra itself but also for most other dedicated anti-air platforms as well. Just try not to forget the stipulation that Skyfire also extends to skimmers; too many times I have seen players mistakenly snap-fire their otherwise decently valuable models against targets which should not impose the Ballistic Skill 1 penalty. A good way to remember which armies Hydras should be able to fire normally against are as follows; Dark Eldar, Eldar, Necrons and Tau all heavily feature skimmers, while it is rare to see a competitive Astra Militarum, Chaos Daemons, Orks, Space Marines (of all varieties, including Chaos but barring Dark Angels) or Tyranid army lacking fliers or flying monstrous creatures.


Thanks everyone for reading this latest article in my Astra Militarum series; hopefully this has proven to be as or more useful to you as all of the other pieces on this subject! While Hydras might not necessarily be the all-rounder death machines they were in 5th Edition or previous rule-sets, they are still nonetheless decent dedicated anti-air units that are surprisingly effective against your run-of-the-mill skimmers, a vehicle type that is in vogue now with the competitive resurgence of Eldar and the recent re-release of Dark Eldar. Please make sure to leave any critiques or suggestions you have in the comments section below - I appreciate any and all feedback! Thanks again and have yourselves a lovely day!
at 6:31 pm