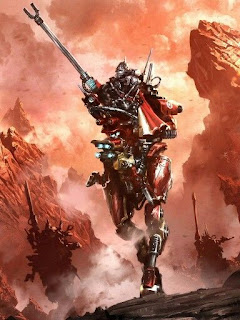 Sydonian Dragoons fit the mold of a lightly armored forward roving vehicle that is both inexpensive and mobile enough to irritate opponents by pressuring their more fragile units and generally messing up an advance by locking up enemy squads that are incapable of harming it - rare as such an example may be. Where the Dragoons really carve a name for themselves is in their unusual role as primarily assault-oriented walkers, something which usually raises alarm bells for most but is surprisingly meaningfully fulfilled by the unit. AV11 on all sides means they present no singular "weak point" which also is just high enough for them to feasibly tarpit most shooting-oriented opponents, something that can be utterly deadly if you exploit it. Keep in mind that most smaller non-vehicle units have a base Strength of four or three and will thus be incapable of harming a Dragoon if they lack any high Strength melee weaponry, a common trait for most xenos factions with regards to their basic infantry; they will be forced to either be slowly ground down by the Dragoon in a protracted melee or employ the risky "Our Weapons are Useless" rule to flee automatically. Doing this might not seem so risky against an Initiative 3 Sydonian Dragoon but its innate Crusader special rule allows it to add D3 to any Sweeping Advance rolls it makes, ensuring the low Initiative xenos and even human factions will be hard pressed to escape its clutches. Its damage output is also readily impressive if you actually try it out in practice, what with the unique rules possessed by its Taser Lance and optional Doctrina Imperatives greatly amplifying its melee capabilities. In a standard round of combat, three Strength 7 AP- attacks backed by Weapon Skill 4 and Initiative 3 aren't terribly impressive, but add in the Taser rule for potential additional hits and the damage really starts to pile up; however, it is on the charge where the Dragoons earn their renown by doubling their Initiative characteristic to a whopping six and adding both an extra point in Attacks (charge bonus) and Strength (the 'lance' effect) to their repertoire. Four Strength 8 AP- attacks at Initiative with possible Weapon Skill improvements will make short work of most vehicles - even other Walkers such as the dependable Dreadnoughts - while also bullying the fleshier foes; add in the fact that Dragoons can be taken in squadrons and you quickly begin to realize just how scary they truly can be up close.

Of course, assault Walkers are currently in a bad place because actually reaching combat is more difficult than ever for them and usually render any question of raw damage-dealing capabilities moot as a result; enter the Sydonian Dragoons and their Dunestrider classification, meaning they add 3" to their move, run and charge distances. Crusader also allows them to roll an additional D6 and choose the highest for their randomly determined run distances to give them that extra push across the board to grab objectives or close the distance with enemy forces. Suffice it to say, Sydonian Dragoons are almost frighteningly swift and sport a mighty hay-maker once they successfully charge a foe - a full squadron of six can feasibly tear apart an Imperial Knight on the charge and do so without requiring as significant of a points investment. Still, what use is speed and power if one lacks the durability to absorb incoming blows and continue the fight - it is in this area that Sydonian Dragoons do fall over somewhat and thus justify their low price point on a per model basis. AV11 on all sides with two hull points and the Open-Topped rules in play are defences that most armies will find trivial to overcome, while any single Immobilized result can permanently neuter a Sydonian Dragoon unless you arm it with divergent weaponry options or luck out by leaving it on an objective marker. Still, the unique Incense Cloud special rule does somewhat alleviate this glaring problem by providing all Sydonian Dragoons with a permanent 5+ cover save that can be improved through Night Fighting being in play or various other effects, though obviously this won't be much of a deterrent against the deadlier factions out there or any actual dedicated assault unit which will handily put a Dragoon in its' place. Broad Spectrum Data-Tethers and Searchlights round out the Dragoons' stock wargear, simultaneously boosting the Leadership of other Skitarii affected by Doctrina Imperatives by one point and allowing the Dragoons themselves or friendly Skitarii units to ignore the effects of Night Fighting against any single target. Lastly, Sydonian Dragoons might natively lack ranged weapons but they nonetheless have access to two options, the first of which - Radium Jezzails - replaces their Taser Goads and morphs them into heavy duty snipers, while the second - Phosphor Serpentas - is less of a raw death-dealer and more geared towards granting Skitarii units (including the Dragoon itself) a bonus to their charges against the target unit. 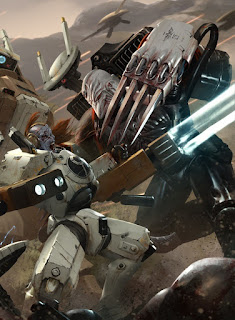 How to Equip Them - Outfitting a unit is often even more difficult than determining the number that you employ, so having appropriate context for each choice is key; this rounds out the most optimal ways to equip a squad.

This is a fairly easy section to cover as there are only two options available to Sydonian Dragoons, both of which are interesting but ultimately in the "whatever takes your fancy" category due to not really improving the wielder in any significant way. Replacing a Dragoons' Taser Goad with a Radium Jezzail does give it a ranged weapon and a decent one at that, but consider that two AP5 Sniper shots that cause additional automatic wounds on to-wound rolls of a six can be imitated in far greater quantities by your basic infantry and sacrifices most of the Dragoons' impressive melee capabilities. I'm not really a fan of this exchange it wastes what makes Sydonian Dragoons tick - their ability to cross the battlefield in record time and pressure opponents up close - but it can doubtless present a unique role-reversal. The second option functions as an addition rather than a swap by granting the Dragoon the use of a Phosphor Serpenta, being a rather pricey Strength 5 AP4 shot that reduces the targets' cover saves and allows friendly Skitarii to re-roll failed charge rolls against the enemy unit dependent on that one middling shot scoring an unsaved wound or successful armor penetration roll. It's not bad by any means but, like the Radium Jezzail, I class it more as unnecessary than anything else.

I don't really see Sydonian Dragoons functioning amazingly well as lone wolves simply because of how easily just one of them can be neutered or destroyed and subsequently give up First Blood, whereas using even just two in a squadron dramatically improves both the chances of them drawing fire from your more valuable friendly forces as well as actually making it into combat. The cost of taking two as opposed to one is still so incredibly minuscule that I almost habitually forget the pricing of just one of them alone, but certainly solo Dragoons obviously have their merits by virtue of how inexpensive they are if you want to use them in that traditional Land Speeder or Pirahna harassment role. Now, with the assumption that you keep them loaded out for melee combat, most vehicles are easy prey for Sydonian Dragoons due to the sheer number of high Strength, high Initiative and (optionally) high Weapon Skill attacks that even a single Dragoon can output. Lighter non-vehicle units - stay away from all but the weakest of monstrous creatures - are also good choices to charge as they will often lack the means to effectively handle a Dragoon and become incredibly susceptible to its improved chances of performing a Sweeping Advance. Ignoring terrain is a smart idea seeing as the Dragoon will rarely find a beneficial use from it given that the walker already possesses a handy permanent 5+ cover save.


Thank you all for reading this article, I hope you enjoyed it! Quirky units are rather commonplace in the Skitarii codex but Sydonian Dragoons are easily one of the more refreshingly (or annoyingly) straightforward selections in terms of their battlefield applications; they rove forward and put pressure on enemies with their considerable close combat presence. I'm a fan of them given how cheap and self-sufficient they are with the mobility and innate cover saves. but they aren't likely to carry a match on their own due to the fact that they are essentially mechanized skirmishers. I'm curious to read your thoughts on the Sydonian Dragoons and how they have fared in your encounters with them. Thanks again!


Fight with this machine, and guard it from the shame of defeat.
- The Ceremony of Commission
at 10:48 pm