Greetings you snotlings and welcome to the second last entry of my speedy gubbinz' section for the Ork Tactica series! Today I'll be focusing on possibly my favorite Ork unit - the Warbikers - who truly make their mark on the Ork faction edition after edition and codex after codex. I hope you enjoy this article! 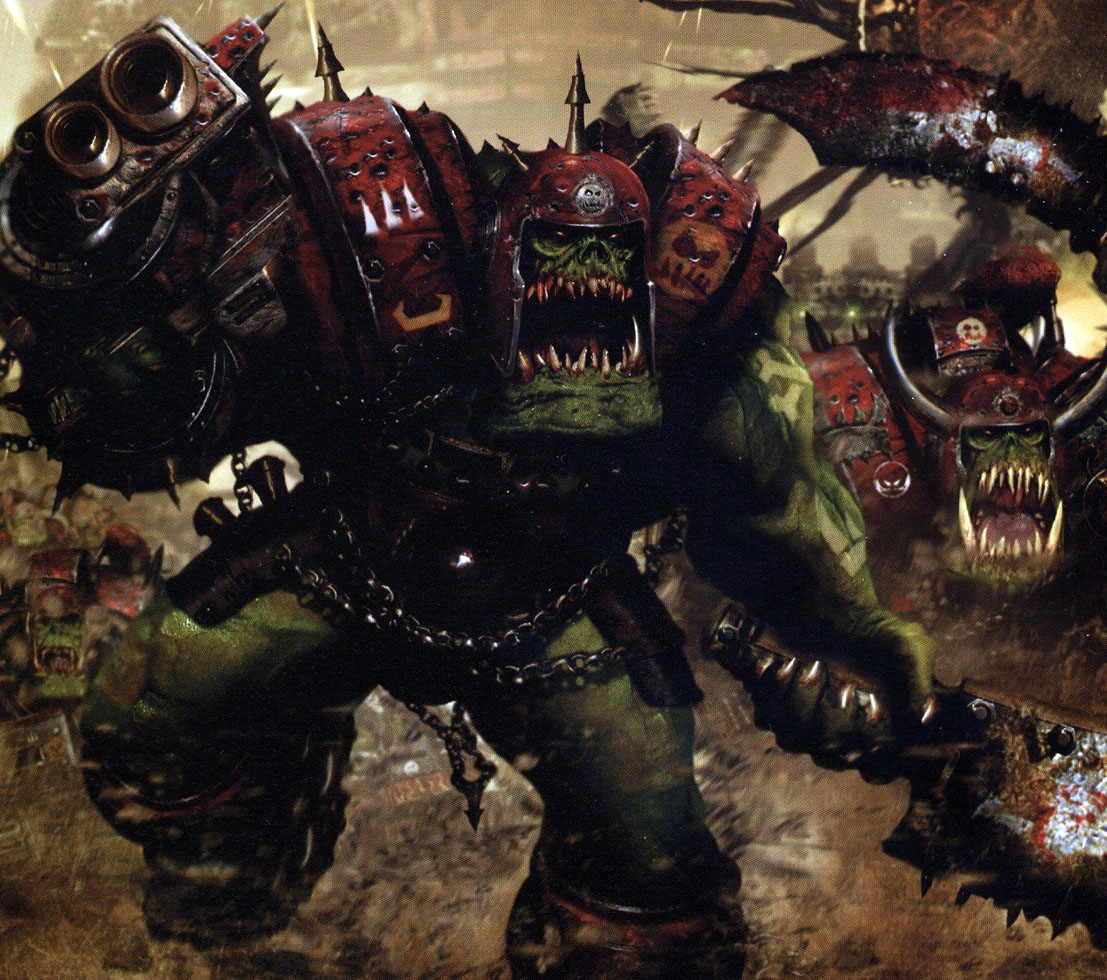 Continuing the trend of highly valuable Fast Attack options for an Ork list, the Warbikers provide you with the same Bike-type love that almost every codex enjoys nowadays; truly, the "armored steeds" of Warhammer 40,000 have evolved drastically from their almost pitiful 5th Edition incarnations. It is appreciable then that Warbikers rank highly on this list given how impressively tough they are while combining solid damage output in both the shooting and assault phases of the game. Toughness 5 isn't necessarily a rare sight for Orks but it is appreciated nonetheless as it makes Warbikers incredibly resistant to small arms fire, a trait only boosted by their unit-wide 4+ armor saves. The heavier duty weaponry also gives this fine unit little reason to pause given that they can innately Jink for a 4+ cover save, uniquely increasing to a 3+ cover save if they Turbo-Boosted in their own prior turn. Couple all of this with how inexpensive even a fully-sized fifteen-strong mob is and you have yourself a true winner, able to take the fight to the enemy in relative safety and demanding far more attention than would otherwise be normal for an Ork unit. Their mobility is as standard for other Bike-type units which means they can zip around the battlefield and claim objectives or other victory points fairly easily and allow your heavy hitters to focus on smashing the enemy as they should, or alternatively you can use the Warbikers as a powerful melee squad led by a Klaw-crazy Boss Nob that runs almost everything short of elite infantry into the ground. Even then, Terminators should beware a fully-sized mob of Warbikers if some other characters join the party! They function just like regular Slugga Boyz in close combat with the added potential benefit of Strength 3 Hammer of Wrath, while the combination of 'Ere We Go and Furious Charge on a Bike-type unit is truly amusing to behold given how incredibly likely it is the unit will make a turn two charge and plow over whatever it touches.

What is interesting to note here is that Warbikers are actually better ranged combatants than should be possible with lowly Ork Ballistic Skill and can be seen as taking a page from Lootas, providing a whopping three Strength 5 AP5 Twin-Linked shots per model to out-shoot even Tactical Terminators with little difficulty. It's not amazing and it isn't at all comparable to what Eldar Windriders are capable of but it is still something to keep in mind for softening targets up before an inevitable charge, or to potentially glance a transport to death and prey on the newly vulnerable models inside. Warbikers are individually three times the cost of a standard Ork Boy, and just under twice as costly with 'Eavy Armor factored in, but the vast range of bonuses that the former unit gets over the latter is more than worth the extras. Not requiring a transport, virtually guaranteeing any charge, having a potent ranged presence as well as greater resilience against both small arms and heavy firepower are all too good to pass up in the "Edition of Devastation" as I like to call it. Of course, there is one big difference between the two; one sits in what is essentially an uncontested mandatory slot for most detachments, the other is forced to compete against extremely useful units such as Deffkoptas in an optional slot. This makes the direct comparison somewhat unfair given the battlefield roles do differ between the units, but this if course assuming that a certain Ork Warlord is not present in the army; while losing the ability to make Warbikers a Troops choice through the standard codex is painful, Forge World offers a free rules document for Ork players on their website that includes one particularly special character by the name of Zhadsnark. Provided you can at least convert up a suitable representative and can use him as the Warlord, Zhadsnark allows you to take Warbikers as Troops choices in his detachment, giving Ork players easily their best Troops choice and one that fits into all manner of builds perfectly in much the same way as Space Marine Bikers or Windriders. Regardless of whether you make use of Zhadsnark or not, however, Warbikers are doubtless a great unit for Orks and will regularly compete with Deffkoptas for your Fast Attack slots where applicable. It's kind of a stereotype by now but given that Warbikers have no real wargear options aside from the singular Boss Nob, let us discuss that most ferocious of greenskins exclusively. Seeing as Warbikers are one of the few Ork units you can reliably expect to get close to the opponent and thus have a good chance to successfully assault a target, equipping the Boss Nob with a Power Klaw is a must given the mobs' probable proximity to a wide range of tough targets. Taking the Boss Nob himself is generally a great idea for the various Mob Rule implications it has, especially with a Bosspole; keep in mind that due to the innate Toughness 5 and 4+ armor save offered by being on a Warbike, a Boss Nob Warbiker can very much be seen as a Wolf Guard Battle Leader equivalent for Orks when placed next to a Warboss or Wolf Lord.

Warbikers are the mobile, cheap and durable unit that any melee oriented army absolutely adores; it can reliably get into combats by itself in the early turns without requiring a transport, it is inexpensive and thus allows for numerous other squads or vehicles to be taken, and it is tough enough to have a great chance of getting across the board with strong numbers. For an Ork army that can either be built as a hybrid gun-line or a fast moving assault force dependent on if a certain unique character (Zhadsnark) is taken, Warbikers can fit into pretty much any Ork list as a cheap scoring unit or a larger, more dominant close combat threat. They provide high multiple-assault potential and can reliably beat other squads down over several rounds of combat through their impressive durability, being arguably the most resilient Ork unit for the points aside from Mek Gunz. You want your Warbikers to be aggressive and use their 3+ Jink saves when Turbo Boosting to cover ground incredibly quickly, snagging objective-based victory points and becoming a Linebreaker option as necessary. Depending on the unit size and whether you shell out the points to equip their optional Boss Nob with a Power Klaw, you can charge them towards all manner of targets including heavy tanks and medium infantry (they will bully regular Space Marines in a war of attrition). Unless you want to take Zhadsnark and several other characters such as a Painboy and Warboss, don't expect them to be able to deal with things like Wraithknights or Imperial Knights as all of the regular Warbikers are essentially dead weight against those larger targets. However, their excellent mobility does allow them to potentially tar pit the weaker (in melee) versions of those kinds of units - think Stormsurges and Ta'unars, but don't expect them to stay there for long due to the nature of Stomps and how they ignore Warbiker armor saves.

Here are some viable builds I recommend for Ork Warbikers;

Warbikers (15) - Boss Nob w/ Power Klaw, Bosspole - Given how incredibly resilient this unit can be for the points with Toughness 5, 4+ armor saves and 3+ Jink saves when it Turbo Boosts (great for the early turns to get into guaranteed assault range), investing a lot into Warbikers actually isn't a bad idea. They are quite nasty at range with up to forty-five Strength 5 AP5 shots that are all twin-linked, while their melee capabilities are equivalent to regular Ork Slugga Boyz with the addition of Strength 3 Hammer of Wrath. Quite the nasty unit for their points!

Warbikers (6) - Boss Nob w/ Power Klaw, Bosspole - At such a low price point, this unit is a great distraction and can eviscerate most standard targets on the charge while generally just being a nuisance without investing too heavily into it. Thank you all for reading this article! Warbikers are easily one of the best units in the Ork codex whether you run them as Troops with the Forge World character Zhadsnark or just as standard Fast Attack choices, combining resilience, mobility and some expected Ork-level damage output into one impressively valuable mob. If you have anything to say regarding Ork Warbikers, feel free to leave a comment and thanks again for tuning in!
at 8:53 pm