Howdy there folks and welcome to another individual character review in my Space Marine Tactica series! Given the honorable role of Forgefather for the Salamanders and charged with seeking out ancient relics crafted by the Primarch his name is derived from, Vulkan He'stan is a powerful all-rounder that has long been one of the most popular characters in the Space Marine codex. I hope you enjoy this article!

EDITOR'S NOTE: Hey guys, this was supposed to be uploaded nearly a week ago but my internet cut out for several days after a black-out for my local area. Sorry for the delay! 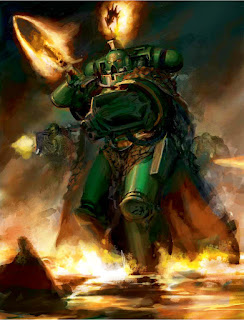 Vulkan has a wide range of equipment and special rules to employ in any given turn, so being acutely aware of all that he brings to the table is crucial to getting full value out of the Forgefather. With the profile of a Captain combined with both a 2+ armor save and a 3+ invulnerable save, Vulkan is a really tanky type of character that can confidently be placed at the front of squads to soak up wounds from both AP3 and AP2 weaponry. He also comes preset with the Iron Resolve Warlord Trait which grants him the Feel No Pain special rule, giving him that little bet of additional durability that you always want for a potential Warlord option. However, he does lack Eternal Warrior and has 3 Wounds in keeping with his Captain profile which does mean you should identify any sources of Strength 8 attacks both at range and in melee as you should not risk using Vulkan to save those wounds - they deny his Feel No Pain as well, so don't think you can get lucky with that "second save". He is the only character in the codex to wield what amounts to a Heavy Flamer, allowing him both to place a powerful Strength 5 AP4 Template perfect for exterminating nearby light and medium infantry as well as allowing him D3 automatic hits in Overwatch, giving some nice offensive and defensive usage. As a Salamander Space Marine, Vulkan can re-roll failed to-wound and armor penetration rolls he makes with his Heavy Flamer to make it a really scary ranged weapon for a HQ character to possess, while on the flip side he also increases his Feel No Pain roll to 4+ against flame-type weapons. Something else to keep in mind is that Vulkan does possess a bolt pistol but realistically unless you want to shoot with him and not do too much damage it is a foot-note more than anything else, and being able to Master-Craft any single one of his weapons isn't much of a benefit seeing as his main forms of attack get no benefit from the rule or already have it.

Regarding his ranking as a close combatant, Vulkan is fairly decent; he is equipped with a mighty Relic Blade in the guise of the Spear of Vulkan to unload four Strength 6 AP3 attacks on the charge with Weapon Skill 6 and Initiative 5 marking him out as a speedy and skilled warrior, alternating to three attacks in a phase in which he did not charge. Being armed with Digital Weapons via his Gauntlet of the Forge and having Master-Crafted on the melee weapon itself allows him to re-roll both a single failed to-hit roll and a single failed to-wound roll in each assault phase, affording him some more reliable damage output. Having both frag and krak grenades is in keeping with Vulkans' place as a Space Marine, though the former will be the one you mostly use so that Vulkan can charge into cover and strike at his normal Initiative - his regular attacks are Strength 6 anyway so the krak grenades will almost never see use. Keep in mind that with no way to generate an Instant Death attack like Cato Sicarius as well as lacking any way to generate AP2 attacks, Vulkan is limited in what targets he can safely engage. Provided he doesn't have to fight the opponent in a challenge, using his squad to soak up wounds against monstrous creatures so as to avoid any potential Instant Death attacks - either through being natively Strength 8 or higher such as a Carnifex or being capable of performing a Smash strike - lets him safely cut the 3+ armored foes down in relative safety. Otherwise, be sure to avoid 2+ armored foes that themselves have AP2 melee weapons as well as character monstrous creatures that can often be too much for Vulkan to handle.

Looking at Vulkan outside of the damage-dealing department reveals a host of different rules to make use of; a standard trick with any Space Marine Independent Character is to attach him to an allied Imperial squad - usually a large Imperial Guard combined platoon unit - to spread the joy of And They Shall Know No Fear around. However, where Vulkan really affects your army is that he provides the master-crafted special rule to all combi-meltas, meltaguns and multi-meltas in his own detachment to effectively twin-link them, but it only functions if he is the Warlord. Combining this with the re-rolls on to-wound rolls for flame-type weapons leads to the Salamanders being notorious for Drop Pod Assault tactics revolving around their incredibly powerful short-ranged weaponry compared to other Space Marine Chapters due to both the Chapter Tactics and unique character they make use of. What is interesting to note about the ability is that it applies to all units in the detachment and not just those with the Salamanders Chapter Tactics, meaning squads such as Legion of the Damned and other applicable vehicles get the benefit. Additionally, as combi-meltas benefit but there is no specification of the buff only affecting the meltagun component of the weapon, Sternguard and other models using combi-meltas will still benefit from the Master-Crafted rule even after using the one-use-only melta shot. Depending on the army you face, placing Vulkan towards the front of a unit is generally not a bad idea as with his incredibly good saving throws, Feel No Pain and three wounds he can eat quite a few wounds that would otherwise tear a unit apart - namely masses of AP3 attacks against a power armored bodyguard squad. Of course, if you take Vulkan he will likely be your Warlord so using him in this way might not be the best idea depending on just how much shooting an opponent can choose to dump into him, especially against foes such as Eldar and Tau that have lots of weaponry that could potentially inflict Instant Death on him. Be sure to apply the Look Out Sir rule liberally and keep several models close to him so that you aren't left with no models to jump in the way of incoming space bullets, but otherwise, he is one of the better wound tanks as far as the main codex Space Marine characters are concerned. As far as preferred units are concerned, Vulkan is naturally suited to a close ranged force given the synergy between the Salamanders Chapter Tactics and his The Forgefather special rule providing re-rolls to flame and melta type weapons used by his brethren Space Marines. Usually this will entail a Drop Pod Assault force to maximize the damage output of the army, and as such I tend to think that Honor Guard or a Sternguard Veteran Squad are the best choices to use with Vulkan. He gives a buffer against AP2 shooting to the former unit that will also make the most of his melee capabilities, while the latter could similarly use a durable leader but instead be used more as a drop-and-pop squad that demolishes units in a deadly alpha strike. Be aware that he does lack the Deep Strike rule so trying to attach him to Terminators isn't necessarily the best idea, while I don't think Vulkan classifies as good enough of a melee combatant to justify using a Land Raider and retinue to ferry him around. Keep in mind that his The Forgefather special rule does not cease to apply if he dies and thus aside from safeguarding a Slay the Warlord victory point there is no other major penalty for losing him.

Vulkan is suited to a Salamanders army that plays to the Chapters' theme of sheathing their foes in a coat of holy flame, incinerating foes at close ranges and acting as a true shock force in keeping with how Space Marines fight. This usually means a Drop Pod-based army that could potentially use either a standard Combined Arms detachment or the Gladius Strike Force as all of the units you will find in a Battle Company have natural synergy with the Salamanders Chapter Tactics and Vulkans' gifts. However, keep in mind that the Combat Doctrines provided by using the Gladius will only be useful to non flamer or melta weaponry the army uses as otherwise they already have all the re-rolls necessary to maximize their alpha strike potential; the Gladius then becomes mostly an avenue for masses of free Drop Pods to allow you to spend the points elsewhere in the army list. Vulkan himself can be placed in almost any unit and add to the alpha strike with his Heavy Flamer while also providing a nasty melee threat in subsequent turns, though I do prefer Honor Guard or Sternguard Veterans seeing as he makes a fine wound tank for either high value unit. Vulkan himself is very much a generalist support character with a focus on melee combat, though lacking Eternal Warrior and an AP2 melee weapon ensure he can't compete with the true kings and queens of combat such as Jain Zar or a Nemesis Dreadknight. He is well suited to taking the fight to the enemy given that his Warlord Trait only affects himself and his crucial The Forgefather special rule will continue to function even after his possible death, allowing you to use him as a sledgehammer as you so desire. Thank you all for reading this article, I hope you enjoyed it! I'm a big fan of Vulkan He'stan as he is an exemplar among a selfless caste of honorable warriors, being one of the most important figures in the Salamanders Chapter. If you have any thoughts to share on his place in the current Space Marine codex, feel free to leave a comment below and I will do my best to reply. Thanks again!


We are born of the fire, but we shall not die of it - instead we will emerge re-born.
- Vulkan He'stan, Forgefather of the Salamanders
at 10:30 pm