Greetings fellow greenskin aficionados and welcome to yet another entry in my Ork Tactica series! This will be the final review for the Fast Attack section and will deal specifically with the Warbuggy, one of the more unusual and rarely seen Ork units. I hope you enjoy this article! 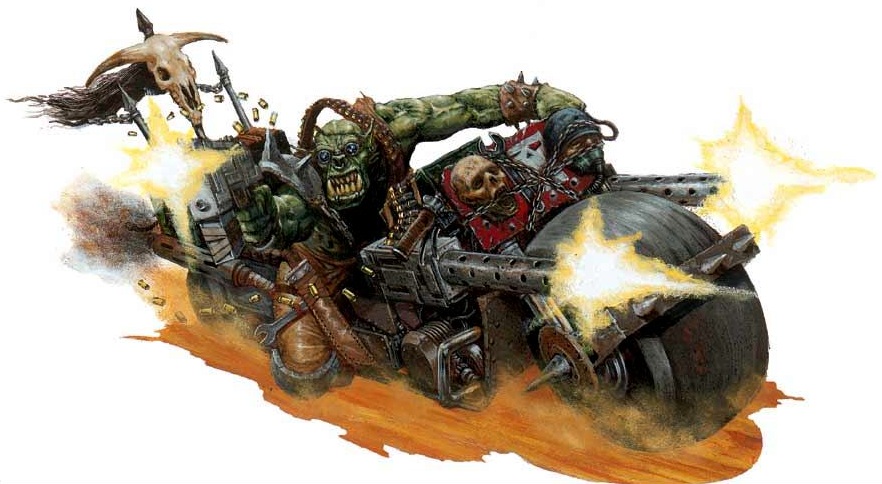 I will begin this review with a rather obvious statement; this is one weird little vehicle that is essentially the vehicular double of a certain other Fast Attack choice, the Deffkopta. What makes it strange is that it doesn't really offer that much outside of what a Deffkopta can do and is generally worse in the equivalent roles, but it has the potential to be hilarious if used in a specific way. The first thing you will notice here is that there are actually three types of Warbuggy; the one that shares the parent name of the unit, the Wartrakk and the Skorcha. Each of these are virtually identical with only the barest of differences; they are all AV10/10/10 vehicles that possess a mere two hull points and are both Fast and Open-Topped. Not only are they even more fragile than Land Speeders due to being Open-Topped and being incapable of Jinking - yes, they are not Skimmers, sadly (not that it would make any sense of course) - but they are also much worse at actually bringing the pain, only ever being equipped with a single weapon and having to deal with that awful Ballistic Skill 2 endemic of Orks. The differences between the three are minute enough to be almost non-existent; the Warbuggy is the stock model that is equipped with either a twin-linked big shoota or twin-linked rokkit launcha, while the Wartrakk is a slightly more expensive clone of the Warbuggy that pays a handful of points to re-roll failed dangerous terrain tests.

Much more impressive in terms of actual dissimilarities is the Skorcha, trading either of those two aforementioned guns to instead carry the weapon that is its' name-sake; the Ork equivalent of a Heavy Flamer, meaning it can gut Fire Warriors and other light to medium infantry with incredible efficiency if it manages to close with the enemy. That all three Warbuggy variants are capable of Outflanking gives the Skorcha its obvious place among the pair, allowing it to arrive from Reserves in hopefully the same turn as some other units, potentially draw some Interceptor fire and then proceed to roast an objective-camping infantry unit. Given how swift these Fast vehicles are, I probably wouldn't bother Outflanking them outside of the Skorcha given that they should be in range to shoot in their first Movement Phase and can be used to grab early victory points for claiming objectives as well with a potential 24" total movement (including the Flat Out maneuver in one turn. To segue into the next topic, does the Warbuggy remind you of anything in particular? Perhaps a certain Ork unit that strangely doesn't use its' rotary blades as a weapon? Yes, Warbuggies may as well be Deffkoptas in disguise; they trade being immune to Strength 3 shooting to instead not innately feature a save of any kind and be far more vulnerable to suffering destruction in a single cursory shot - a lone Tau Fire Warrior has a minuscule chance of causing a fully-powered Warbuggy to Explode with one blast of his or her Pulse Rifle, but it is a chance nonetheless. Warbuggies that can reliably make use of cover are undeniably more resistant to small arms fire compared to Deffkoptas, but generally speaking there are just too many weapons or angles of attack that render Warbuggies as death traps; as an example, Smart Missile Systems make an utter mockery of Warbuggies, whereas Deffkoptas can survive their artificial wrath with greater ease.

Warbuggies also suffer from being incapable of charging into a combat or grabbing the Relic in the applicable mission type, meaning all those opportunities to soak up Overwatch for a much more important unit, tie up a nasty ranged unit in a close quarters engagement or actually win in a specific match are lost to the Warbuggy. The differences in unit types are also important to consider given that the Deffkopta as a Jetbike is capable of soaring over intervening terrain and models to get to its destination without hindrance while also having a great total movement in a given turn once it Turbo Boosts, something the Warbuggy variants simply cannot emulate. What makes this so painful is that a stock Warbuggy is a but a few points cheaper than a Deffkopta while the other two upgraded versions are either identical or more expensive in that regard, and for the reasons explained above they are by no means valuable by comparison. This generally leads to Warbuggies being seen as the inferior step-brother to the Deffkoptas and thus not worth considering in the most optimally-constructed army lists, though I do feel they serve a small purpose that I brought up earlier. A Deffkopta has to lose out on wielding a hull-mounted heavy flamer to be able to charge units, giving the Skorcha its own niche to fill next to the Ork Jetbike. Whether you find this to be worth it or not is really a question of what the rest of your list can bring given that a few Meganobz, Burna Boyz or even Lobbas can easily clear objectives with either templates or massed Barrage blasts. I think Warbuggies could be a decent unit in their own right, and the potential to be fielded in squadrons can lead to some amusing scenarios in much the same vein as using large collections of Killa Kanz, but generally speaking there is almost no reason to ever use them over Deffkoptas and they have predictably fallen by the wayside as a result. The first thing to do here is to treat the Warbuggy as a Deffkopta in disguise and the answer to the titular question for this section of the review becomes rather obvious; give it a twin-linked rokkit launcha if it fits either the Warbuggy or Wartrakk description for all purpose damage dealing and general annoyance uses. If the Skorcha is taken instead, there's not really much to add; the entire point of these models is that they are hilariously cheap vehicles - perhaps the least expensive in any standard codex - and they act as distractions and objective-nabbing nuisances. This means you should never bother with any of the upgrades aside from perhaps the Red Paint Job on a Skorcha to give it that extra potential inch of template range, but otherwise, you should really leave these bare. As for which actual variant of the trio works best for a given Ork list, this also presents a rather simple conclusion; a Skorcha gives you a focused anti-infantry objective-clearing machine, the others provide a fast moving twin-linked rokkit-launcha with one being slightly more expensive because it can re-roll failed dangerous terrain tests. Honestly, I'm not really a fan of the Wartrakk over the Warbuggy unless you have spare points as Orks can always put such few points to good use elsewhere with things like Bosspoles and so on; a Warbuggy that gets Immobilized in the early turns can still at least sling a few shots off at medium range with its twin-linked rokkit launcha, so paying extra for the Wartrakk should be seen as a "I have points spare" upgrade rather than anything remotely mandatory. The Skorcha is the most expensive of the bunch and is the least versatile given its weapon having little use against all except the most lightly armored open-topped transports, making it a less valuable niche unit. I personally prefer the stock Warbuggy outfitted as above, but if my army list is lacking in ways to clear cover-camping infantry - a good example of this is a Zhadsnark-led Biker list that is incapable of using Mek Gunz - then an Outflanking Skorcha suddenly becomes a near must have in general Warbuggy terms.

Let's be honest here, Warbuggies are not ideally used in squadrons due to how the Vehicle Squadron rules work when combined with their ridiculous fragility. Lacking an innate save of any kind as well as being AV10 Open-Topped vehicles with a mere two hull points each makes for some horrendous match-ups, especially once you realize a Warbuggy that suffers an Explodes result has a chance of harming its' squad-mates. The main benefit you get for fielding Warbuggies in a squadron as opposed to a mob of Deffkoptas is that they are immune to Leadership-based tests and attacks, meaning they will not flee for any reason. However, they can also be rendered useless by virtually all of the Vehicle Damage Chart results and adding a +1 bonus to any applicable rolls due to being Open Topped is less than ideal. Much again like Deffkoptas, the real value of Warbuggies come from using them as solo distraction units where a tiny investment can reap massive rewards in objective-based missions while relying on being resistant to light small arms fire. A smaller unit is also naturally easier to hide and thus will draw less attention from the opponent, allowing you to steal victory points and objectives or force them to spend more points killing the Warbuggy than you paid for it. Race them around the board but be wary of the fact that virtually anything can destroy them with ease given that they completely lack an in-built cover or invulnerable save, while they lack the utility of a Deffkopta for being able to charge an enemy unit and lock it up for a few turns.

Here are some ways to use Warbuggies that I feel are appropriate;

Warbuggy (1) - Twin-Linked Rokkit Launcha - If you want to have the utility of a Deffkopta but don't like the model or find that it is unavailable, a Warbuggy is not a terrible alternative in the solo operative role. It's inferior overall but it definitely isn't a bad choice, especially with the option to Outflank in certain scenarios.

Skorcha (1) - Whether you run this up the board or Outflank it, the Skorcha is a feisty little buggy that can clear objectives off and run amok in the enemy backfield to give your advancing battle-line an easier path to victory.

Warbuggies (5) - Twin-Linked Rokkit Launchas - If only for the hilarity of it and the fact that vehicles are effectively Fearless, I do recommend trying this unit out at least once to see if they can cause some general havoc; you will be amazed at how cheap such a numerically large vehicle squadron can be! 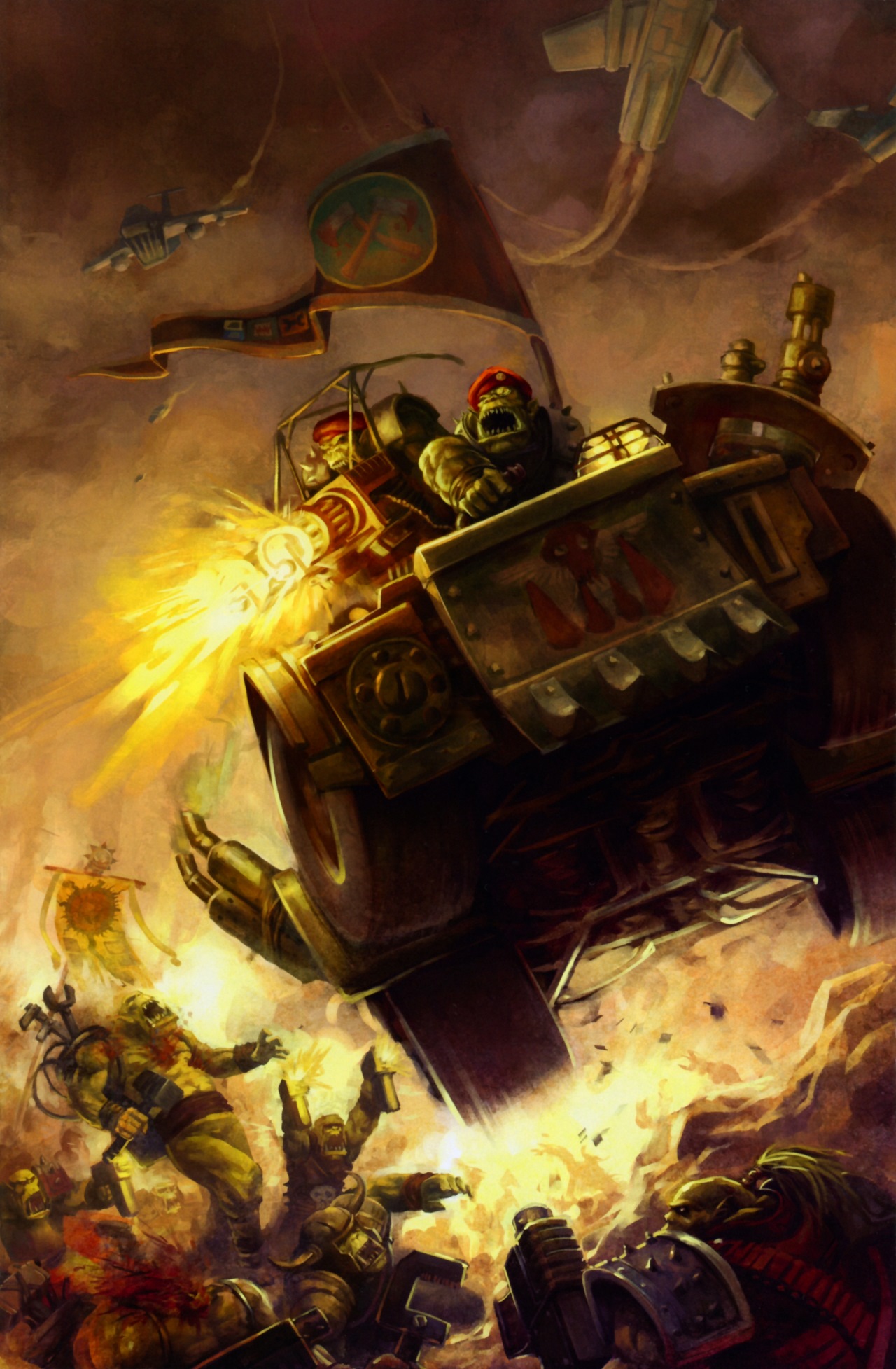 Thank you all for reading this article discussing the adorable Warbuggies, I hope you enjoyed it! Despite almost never seeing this unit in action myself, I do appreciate their role as a vehicular alternative to the Deffkopta for players that prefer the more mechanized look for their army. If you have any feedback for me regarding the unit in question, feel free to leave it inthe comments section below. Thanks again!
at 6:06 pm