Hey all, we've got some breaking news for you; the Tau have been confirmed as the next codex release in this month's White Dwarf, with images now leaking around the internet! This initial round of pictures comes courtesy of sinowarrior over on Warseer. For any and all discussion, check out +Bell of Lost Souls for the latest news and updates! Enjoy! 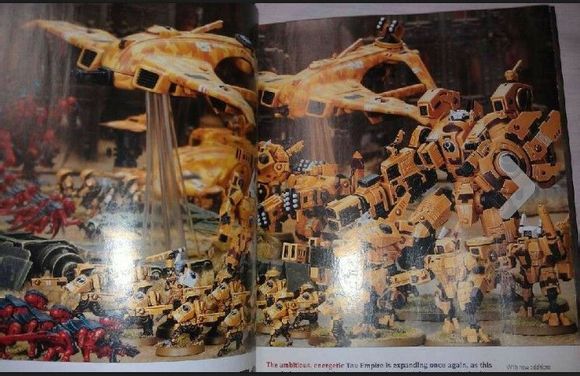 Well, it appears that the Tau are getting a host of new kits - I count five new and unique plastic kits - as well as at least three finecast character packs; likely, two of those are resin treatments for the famous Aun'Shi and O'Shovah. The third is a mystery at this stage, but judging by earlier rumours that appear to be pretty accurate given these images, it is likely a 'Fire Warrior character'. But first, let's study this main image showing off a fully painted and assembled Tau force sporting the new models in action. In the front right, we can see a titanic battlesuit - the new 'Riptide'. It is incredibly big - by the looks of it, it even dwarfs a Nemesis Dreadknight, which is no mean feat! Underneath and in front of the Riptide, we can also make out the updated Crisis Battlesuits - their unique poses and higher detailed models are definitely the mark of a new kit. To the left of the Riptide, we can also faintly make out the new Broadside battlesuits - not bad at all! Of course, dominating the image are the two new Tau flyers - the Sun Shark Bomber and Razorshark Fighter, though 'which is which' is definitely accurate here; my assumption is that the bomber is the one towards the back of the image. So; the Tau army looks awesome! Leaving that behind though, let's look at the specific kit images. 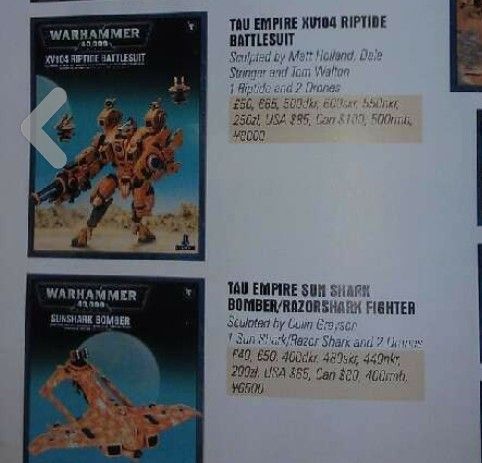 Here we can see a close-up of the kit of the Riptide, as well as a better angle of the model itself and the pricing for each territory. From what we can tell, given the above image, the Riptide will have access to a lot of different - over-sized - weapon options, notably that they look like much more powerful incarnations of classic ranged weapons such as Fusion Blasters, Burst Cannons and the like. All in all, it looks a massive, awesome looking kit! Below that, we have an image of one of the new flyers; I must say, this does rub me a bit the other way, though I think it looks neat. It will be most interesting to hear about the rules previewed for the Tau, especially given we have heard almost nothing about the fliers - on the Riptide though, as our earlier post made mention of, we do know from multiple sources that it will be an incredibly durable, quite strong ranged-focused monstrous creature that may very well come off as a mix of a Wraithlord and a Nemesis Dreadknight. All we can do is wait and see! 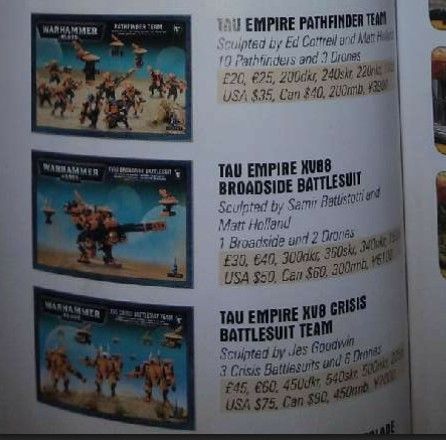 Lastly, we have perhaps what a lot of people were most interested to see; the classic battlesuits being redone. Most prominent amongst them is the fact that we now have a three-model Crisis Battlesuit team kit, all in plastic! This is fantastic for so many reasons; the price of purchasing three individually before was excessive from what I can gather, that and their poses were all very similar and stiff. The new models look nice, their poses unique, and it appears that it will very much allow Tau players to buy their battle-suits in bulk; the white helmet of the central battlesuit on the figure is for a commander or team leader, if I am not mistaken, meaning that it should easily cater to all your Battlesuit needs. Of course, it must be noted that these may merely be a repackaging of the old models - even then, it appears you get them cheaper than before! It's a win-win either way. The Broadside suit is obviously a complete overhaul of the old model, as it appears to lack the twin shoulder-mounted railguns that defined the previous model; that it actually has a seperate model and is no longer an upgrade pack is sure to please many, of that I am certain. Interestingly, it looks as if the Broadside is 'carrying' its railgun much like a Fire Warrior would carry their pulse rifle. A very cool design change, that is for sure. Another interesting tidbit is that we finally have a new plastic kit for Pathfinders - woohoo! And given the box art, it looks like we get a decent suite of new models as well. They look pretty distinct, though details are rather hard to make out.

Hmm, we've got another photo for you to enjoy; this one concerns the Tau Battleforce, though it is a smaller and less distinct image than the others. From what I can see, the battleforce comes with a Crisis Suit team, a Stealth Suit team, a Fire Warrior team, and a Piranha. All the drones you see are from the individual kits. All in all, given the price, that looks to be a very high value battleforce that has a great mix of models that will likely find their way into everyone's collection! Note: This photo was taken down, and I have been unable to find it. Sorry for the inconvenience!

All in all, these new Tau models look fantastic, but most importantly; they are finally getting the new codex they have deserved (and needed) for so long! There appears to be quite a few new units, and hopefully the new kits will encourage players to get their old Tau armies out - or start new ones fresh. I am very excited for this release - as I am sure Mr Jax is - and I can't wait to get the codex in my hands!