Hey guys JT here with another post from teh large bag of fun otherwise known as Megavalhalla, where he shares some of his tips for getting an army painted in a time effective manner, you can also view my article on the same subject here.

We at Imperator Guides also would like to share our deepest sympathies to L2E after the recent loss of his beautiful little dog named Molly, and we wish him all the best in dealing with that. As most of you will agree, the loss of a pet can sting just as much as the loss of a human family member - I certainly would feel the same if my dog were to pass. L2E had had this cute little fluff ball since before he went to school - and with the passing being so sudden and unexpected, it truly was an unfortunate shock.

I'd also like to apologize for my lack of posts as of late, I've been confronted with some very difficult issues that have prevented me from working on the site, or even engaging in my therapeutic hobby sessions - hopefully everything will be resolved within the week and I can start updating you guys on my latest armies and provide some more tips to help you guys with all of your hobby endeavours.

This one might sound obvious for a lot of you, but time and time again I have seen so many painters using standard brushes for monoliths, land raiders etc… sounds obvious right? For some others this might just be so they can get an even coat, which is understandable. If this is the case use a large tank brush and water down them paints, and slather on multiple coats. This will save you time and you can line up at least 50 models and do them in a chain that way, it works very well on space marines. In this article, using the methods below you can easily paint at least 1 squad a week (My time is very limited so I really need to push it when it comes to painting). 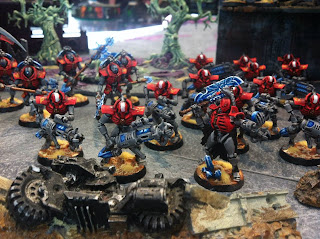 Painting an army efficiently and with time effectiveness


In reference to the previous article by now you have picked your prototype model and now have the colors, let’s just say you have a uniform army that can use the same colors across the length of the army (Space marines, Necrons, Ogres, Orks, Empire, Tyranids) you can divide it into sections:

1. Main/ primary color: This is the initial color that will go on the majority of the model, just slather it on. Don’t worry about spilling it onto other sections as they will be painted over anyways and cleaned up later on.

2. Secondary main color: This will be the color that will not cover as much of the model but will still play a significant part of the color scheme. This is where you have to be careful around the edges, use a standard brush to go over the majority then a finer brush to fill in the rest.

3. Secondary colors: Add this on the minor areas, these may be anything on the model such as bolters, swords, random accessories etc

4. Wash: Select an appropriate wash and don’t be shy, slather it on! This will help adding shadow and giving a more 3d look to the overall model and adds depth.  Try to get the wash to spread evenly and don’t let too much of it pool in the recesses.

5. Layer: Put a color on top of the now dry wash which is slightly lighter than the original base colors of the secondary and main colors. Be careful not to put the color in the crevices but get as close to them as possible. Put a layer on top of each main, secondary main and secondary colors.

6. Highlight: Across each and every layer and the edges, highlighting might be painful but don’t be troubled, for you now nearly finished!

7. Contrasting color sections: Truth be told, this can go on at any section but on a lot of models this may just be a tattoo, line markings, eye lenses etc or you may even be painting a Tyranid bio weapon or Necron gauss tube. The purpose of this color is to make it stand out so make it radically different from the rest of the colors, such as if the majority of is green, go blue or if red go green or purple. It’s these little things that make the difference.

I used the exact same guideline on my necrons, after using black as the base I then put on the main color which was Mechanicus Standard Grey and Mephiston Red I then washed Agrax Earth shade over the top. A layer of Evil Sunz Scarlet went over the top and Dawnstone on the grey and a high light of Administratum Grey and Wild Rider red. Then the contrasting blue went on the on the gauss weaponry and eye lenses. A little bit of yellow was as a secondary contrast to pull it altogether and truth be told I didn’t even think it would work… but I was in for a hell of a surprise.
I got my army and my board in at Games day Sydney Australia after beating the staff at GW. So guys tell me what you think and give it a try… who knows, it might just work for you. There is only one way to find out! 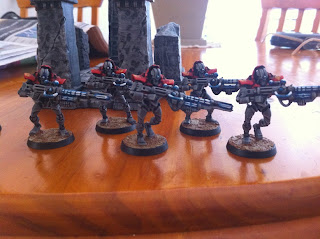