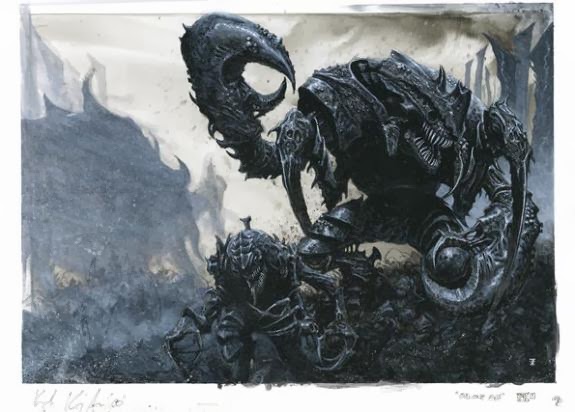 Hey guys, my name is Learn2Eel, and today I'm going to be bringing you another article in the Tyranid Tactica series! One of the iconic hold-overs from 3rd Edition Tyranids, Old One Eye has taken up a new role in the HQ slot, something that will definitely interest those aiming for a themed force involving massed Carnifexes. A tough nut to crack and one that can absolutely slaughter most anything that gets in its path, Old One Eye is one of two HQ choices that doesn't bring that pivotal Synapse to the table. Whether or not the classic bug strikes your fancy may very well be based upon this fact, so always make sure you have lots of other Synapse creatures if you bring the wounded beast of Calth to battle. I hope you enjoy this article!

Balking at Old One Eyes profile at first glance is actually not that uncommon, even despite lacking some of the crazy stats we've seen for characters such as Skarbrand or Kaldor Draigo. It is one of the few native Strength 10 units in the game, meaning that its standard attacks will inflict instant death on Toughness 5 or lower models. Armed with Crushing Claws, Old One Eye literally never needs to Smash; it is already Strength 10, it gets Armourbane from the claws, and it even ignores Unwieldy because it is a monstrous creature. To put this into perspective, Old One Eye has five base attacks when counting its two melee weapons - it has a pair of Scything Talons it will never use - and six on the charge. It also does D3 Hammer of Wrath hits at Strength 10. Basically, any character that can't kill it before it strikes and lacks Eternal Warrior or Toughness 6, or any vehicle that gets in its way, your opponent may as well just slap those models off the table. Old One Eye, even with a pretty mediocre and disappointing Weapon Skill three, will just annihilate them with no difficulty whatsoever. Weapon Skill seven isn't too common for most armies, so Old One Eye will usually hit on 4s. I dread what would happen if a Daemon Prince that either fluffs its rolls or is, for some reason, not equipped with a Bale Sword or daemon weapon, goes up against Old One Eye. The result should be characterized with a suitable "splich" sound. Old One Eye may as well be the Tyranid equivalent of a freight train at full speed. Spartan Assault Tanks? One round is all Old One Eye needs.

With no ranged weapons to speak of and almost identical durability to a standard Carnifex, Old One Eye really has to prove its point in melee to be valuable. With its incredibly damaging attacks, all it needs is another little edge. This comes in the form of generating extra attacks for every hit in its first wave of attacks - you don't count the extra attacks for this rule - giving Old One Eye a potential twelve attacks on the charge, all at Strength 10 AP2. Of course, a significant amount of luck is required for that, but it essentially guarantees that anything that can't kill Old One Eye first and also lacks Eternal Warrior is going to get squished. Amusingly, Old One Eye also gets an extra tail attack at Strength 4, AP4 with Rending, which is something to remember more than anything else. So does Old One Eye do anything other than kill things so hard that they die to death? Fortunately, it does; it makes up for its lack of Synapse by conferring its Leadership 8 to friendly units within a 12" bubble. This is really handy if you are deprived of Synapse creatures, meaning even your basic Hormagaunts and Termagants will fail their Instinctive Behaviour tests less than 50% of the time. However, it still doesn't make up for the risks inherent with Instinctive Behaviour, especially as Leadership 8 isn't that great. You still need those Synapse creatures, so taking Zoanthropes, Trygon Primes and Tervigons is still as mandatory as otherwise. Hilariously, you may not care if Old One Eye itself fails an Instinctive Behaviour test, so long as it happens near an enemy unit or two. There aren't too many units in the game that will actually stop the beast in close combat, and none that can afford a walloping. And if Old One Eye gets Rage? Oh dear....

So with no ranged weapons to speak of and the same defensive stats as a Carnifex - Toughness 6, 4 wounds and a 3+ armour save - Old One Eye obviously has a bit of a hill to climb to reach combat. It can't join units - though it is a character - and it doesn't have any helpful special rules like Shrouding. What it relies on is its stock Regeneration, allowing it to regrow a wound on each of its friendly turns on a 4+. Additionally, its Warlord Trait affords it Feel No Pain on the turn after it takes an unsaved wound. Realistically, any competitive army list nowadays can easily deal with four Toughness 6, 3+ armoured wounds in one shooting phase, so having Old One Eye rely on Regeneration and a "delayed" Feel No Pain isn't really ideal for an expensive commander model. This is why I recommend not using it as a Warlord, just because it will forfeit that point much easier than you would hope. It might lose out on the Warlord Trait, but its better than having a Leadership 8 Warlord that lacks Synapse and is pretty darn easily killed. The amusing truth is that unless you take a Tervigon as your other HQ choice, Old One Eye will never be the Warlord anyway in an army with two HQs. Its Leadership 8 is the lowest of all the potential Warlord choices in the army, and Tervigons are not characters and thus cannot be the Warlord.

Old One Eye is a challenge to use because it is neither an independent character or naturally part of a brood. It has the same defensive stats as a Carnifex with Regeneration and the sixth Tyranid Warlord trait, which doesn't lend itself well to a HQ choice that may be a Warlord. With the terrain placement rules, try to have a big terrain piece on the edge of your deployment zone, then litter the middle of the board as much as possible. This should give Old One Eye some breathing room to move up; as it uses the standard Carnifex model, or the old Finecast model, it isn't too big of a target and thus can be hidden far easier than a Tervigon or Haruspex. Its Initiative of 2 means that charging into and out of terrain really isn't that big of a deal unless the opposing unit has power fists, so generally, not too bad at all. Its model is small enough to get a 5+ cover save from intervening Hormagaunt broods, especially with varying heights on terrain, so make the most of this as much as you can. Aim Old One Eye for highly valuable and durable vehicles, such as Ghost Arks and Land Raiders, or even go straight for units that are tied up by your more mobile infantry broods. Its offensive capabilities are naturally suited to taking on vehicles above all else, while characters lacking Eternal Warrior are also easy prey - Old One Eye can issue challenges after all! Combo-charging Old One Eye with a Harpy can be quite brutal, meaning enemies won't strike before it so that it can benefit from its extra attacks to slaughter units.

Old One Eye strikes me as wanting to be a fire magnet, but not exactly having the durability to be a great one. It will smash any vehicle and unit lacking power weapons it comes across into pulp, while many monstrous creatures would be best served trying to avoid it. But, it is still 'only' Toughness 6 with four wounds and a 3+ armour save. A pair of Riptides backed by Markerlight support will make short work of Old One Eye in one round of shooting. A squad or two Dire Avengers firing at their 18" range after or before Battle Focus moves will statistically put the beast down if it lacks a cover save. A volley from two to four grav guns will slaughter the monster of Calth. This is just reality; it is as easy to kill as a Carnifex in one round of shooting, but that is what you can try to exploit. Restrict as much shooting at Old One Eye as possible, and this will allow it to gain its Feel No Pain trait and make use of Regeneration. I would avoid making it a Warlord as it is one of the most easily handled Warlords that Tyranid players have access to, though it is probably the most damaging. Try to keep it backing a swarm of Hormagaunts, using them as cover and moving through terrain if possible. If nearby Synapse creatures are eliminated, Old One Eye's Alpha Leader special rule will come into play until another Synapse creature can move into range. One turn of Leadership 8 for a bunch of units should be just fine for their Instinctive Behaviour tests. From there, aim for the nasty units, or even just ten-strong Tactical Marines and other such bulky scoring units; getting Old One Eye, even unsupported, into such a unit will pretty much confirm its end. It will maul any typical scoring unit, so use that to your advantage to clear objectives - having Old One Eye sit on an objective in the midfield in cover is sure to frighten your opponents! 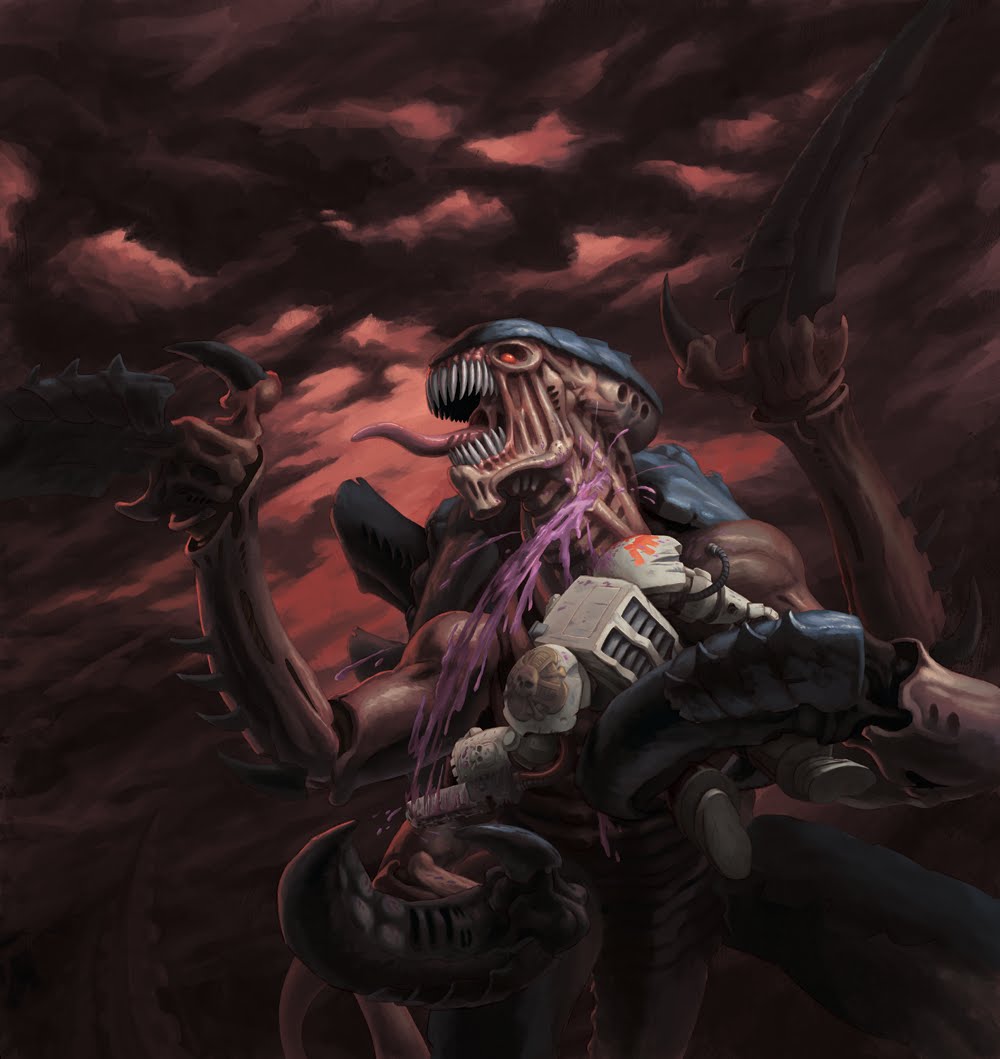 Many great horror stories owe their numerous credits to the monsters they invent, a creature so terrifying and disabling that it seems nothing can stop them. This is true horror, where individuals feel helpless in the face of fear, swallowed by dread. While Old One Eye may not be at home in such a setting, it nonetheless defies belief with its seeming immortality. A protagonist may feel they have put the beast down, but only to their demise does it lead as Old One Eye rises again. As it terrorized Calth from beyond its frozen grave, so too has this monstrous Carnifex sowed destruction throughout many worlds, striking from all angles unbeknown to its prey. An alpha organism of the Swarm, Old One Eye is a bestial creature that very much fits the legend. Death has claimed it countless times, but yet it never ceases to consume and annihilate all in its path.


Thank you for reading this article! Please, share your thoughts on the article and the changes I am experimenting with for this series. I am open to any and all feedback! And remember, for any and all discussion on Tyranids and Games Workshop stuff, head on over to +Bell of Lost Souls. Thanks again! Eel out.
at 8:41 pm