Howdy there folks, Learn2Eel here and today I want to kick off the Astra Militarum Tactica series with a look at the Hero of Armageddon, Commissar Yarrick. He boosts the resolve of nearby warriors, he is a tough Warlord that will rarely give up a Slay the Warlord victory point, he is pretty darn nasty in combat and he does all this at a super low cost. Yarrick has returned in a big way and I'm glad to see it as a childhood fan of his constant clashes against the terrifying Ghazghkull. 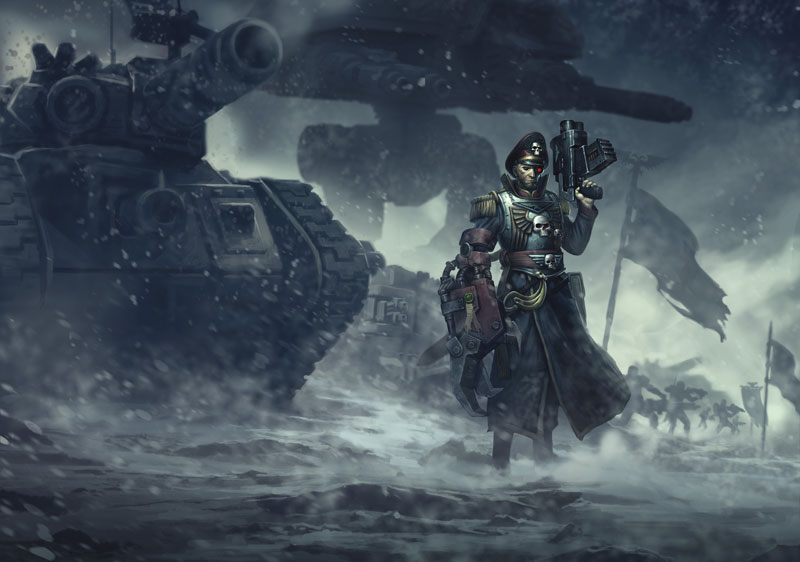 Historically one of the tougher choices when selecting a HQ for Astra Militarum forces is deciding between either a Company Command Squad or a Lord Commissar. On the one hand you get a Warlord that counts as between five and eight models that can issue Orders and provide all sorts of special abilities, and on the other a character that stops all your nearby infantry from fleeing the field. Both have their merits and until the new codex I would have generally said there is no clear victor, but then along comes an iconic unique character that flawlessly combines the best of both worlds.

Commissar Yarrick has been given some significant additions and a hefty points drop from his previous incarnation in an attempt to make him match the background of a born leader and a battle-hardened soldier. Where Yarrick previously was just a tough as nails Lord Commissar that was hard to fully beat down, the new one now has the same capabilities as a Company Commander and can thus direct your forces while also making sure they don't run away. This makes Yarrick a true generalist HQ choice that will function incredibly well in almost any match-up, though his value as a cheap denial of a Slay the Warlord victory point is also noteworthy.

The old traits of Yarrick are mostly all there, between the various tweaked Commissar rules affording his attached unit a guaranteed pass on most Leadership-based tests at the cost of an unlucky soldiers' life, bringing the pain with some nasty Strength 6 AP2 Unwieldy attacks and being one of the few normal humans to carry a Storm Bolter. His gimmick of getting back up on a 3+ similar to Necron Ever Living rolls is identical, but now Yarrick has both the Eternal Warrior special rule and a 4+ invulnerable save to really tank some damage.

Even despite losing out on forcing opponents to re-roll successful to wound roll against his Toughness 4, the addition of a 4+ invulnerable save and Eternal Warrior means he will "die" far less often with saves against power weapons and ignoring Instant Death. A Toughness 4 character with 4+ armour and a 4+ invulnerable save is nearly on par with a Space Marine Captain without upgrades for defence, but throw in the Iron Will and Eternal Warrior and you have yourself a Warlord that is incredibly unlikely to ever give up Slay the Warlord. His Commissar abilities and melee prowess serve to make Yarrick a great value package as-is, and that is before one even considers the rest of his abilities.

Yarrick has a guaranteed Warlord Trait that allows friendly Astra Militarum units within 12" to ignore Morale tests for losing 25% of their unit as casualties to a shooting attack. For an army that is heavily based around infantry-centric gun-lines, this is quite possibly the best Warlord Trait you could ask for - couple this with all friendly units within 6" of Yarrick using his Leadership value of 10 and you can see why many competitive players have sworn by the old dog.

While Yarrick strangely doesn't confer Stubborn - and no longer provides Fearless - the Summary Execution rules mitigate this problem for his unit at least, so there's no change of him or his unit running of the table. This makes him the perfect complement to a Primaris Psyker in a blob squad where Yarrick can act as both a bodyguard and fulfill the role of a Ministorum Priest by keeping the unit in check. A nice touch is that Yarrick also isn't reserved strictly to melee combat as far as damage output is concerned as he can use both his Storm Bolter and the Bale Eye to good effect with Ballistic Skill 5. The latter is effectively a Hot-Shot Laspistol that can be fired alongside the Storm Bolter which gives Yarrick a nice little attack for softening enemy units before a charge.

Of course, where Yarrick has seen the biggest change is in the addition of both the Voice of Command and Senior Officer special rules which sees him styled as a Company Commander in disguise. This means that not only can Yarrick issue Orders just like any other "Commander" model in the Astra Militarum, he can issue up to two Orders per turn and gets access to the strongest of these normally exclusive to Company Commanders. Orders are similar to classic psychic powers where they are based on a Leadership test, but their main value comes from opponents having absolutely no say in their application - Orders can't be stopped or denied! Not only is this a serious boon over psychic powers in general, but the fact that many of the Orders are so powerful - giving an entire unit Ignores Cover on its ranged attacks, or affording a squad both the Monster Hunter and Tank Hunter rules - sees that Yarrick's value is amplified exponentially as a support character.

When you consider that he also provides Leadership 10 to units within 6" - but not for Orders - Yarrick quickly stamps himself as one of the premier characters in the book. He stops your gunline from fleeing much like a Ministorum Priest, he is a nasty melee character similar to a kitted out Lord Commissar, he is an incredibly tough Warlord akin to a Tank Commander and he doles out high-tier Orders just as a Company Command Squad. Yarrick is the complete package and quite possibly the best HQ choice available to the Astra Militarum while he is easily the best special character in the codex. There is no army list that cannot be improved through the use of Commissar Yarrick. 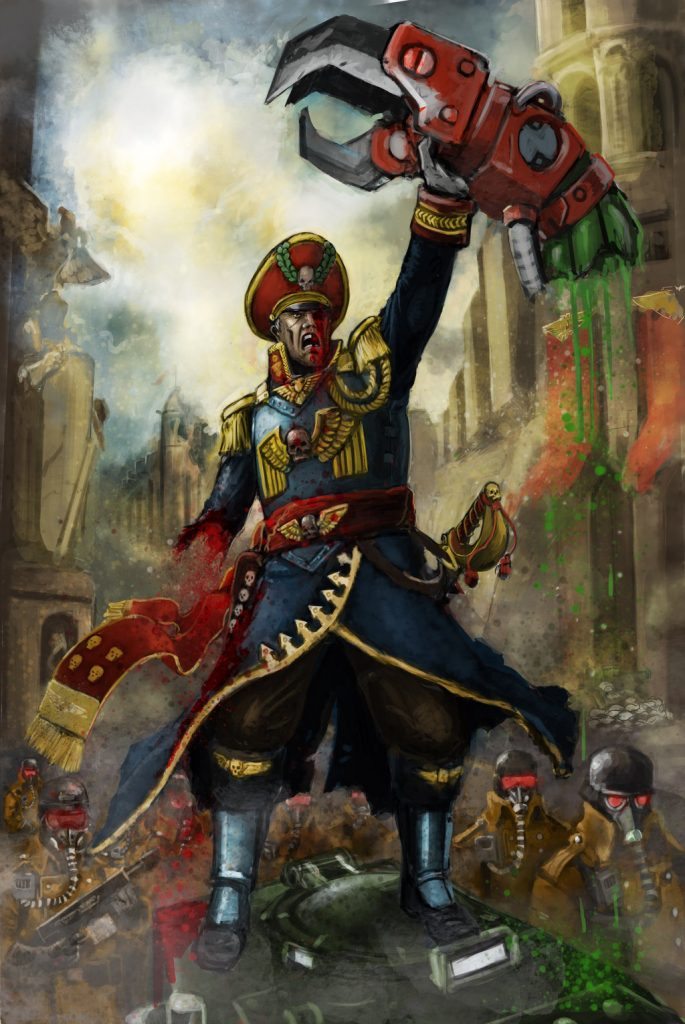 A quick note for those confused about Yarrick having both the Chain of Command and Senior Officer special rules. Most groups and players are ruling that Yarrick can be the Warlord as long as you don't also take a Company Command Squad, as otherwise there would be no reason for him to have a Warlord Trait.

Commissar Yarrick belongs in the heart of an infantry based gunline sporting Artillery units and all kinds of heavy support options, whether it be Manticores or Leman Russ Battle Tanks. The sheer devastation that can be wrought by giving a Heavy Weapons Team Ignores Cover or Sabre Defence Platforms both Monster Hunter and Tank Hunter is insane and justifies Yarrick's inclusion alone. To then make the most of his other abilities, stick him in the middle of nice and big Infantry Squad blob consisting of at least thirty models plus characters; this unit will anchor your defensive line and with Yarrick and some psychic support this unit will be absolutely devastating as well.

You want to make the most of Yarrick's Leadership 10 bubble as well as his 12" range on ignoring Morale tests against shooting casualties and the "unit" requirement means you don't have to bunch up too much either. While you can use Yarrick more aggressively in a transport as part of a mechanized force, it will waste his Orders for several turns until your units disembark from their transports while also remembering that Guardsmen of all kinds don't belong in an assault except as a defensive or counter-attacking last resort. They are at home blasting the opponents to pieces while characters such as Yarrick are the lynchpins - though Yarrick is darned tough, try to keep him towards the rear of the unit he joins as you don't want him to die unnecessarily. If you want Yarrick in combat, join him to a unit of Bullgryns and an allied Land Raider Crusader for maximum devastation. The old dog also does well manning an Aegis Defence Line or Bastion weapon emplacement with Ballistic Skill 5, but keep in mind that he will still have to shoot at whatever unit the rest of the squad chooses (though you could expend an Order with Smite at Will to Split Fire).


Thanks all for taking the time to read this article! I am eager to hear your thoughts on the grizzled veteran of Armageddon and how he has performed in the games you've played. If you have any critiques or suggestions, please leave a comment below. Have a nice day!

I'm trying to make my articles shorter and sweeter without as much repetition. Hopefully this means I can put them out a bit more regularly. Let me know if you like this change!
at 11:28 pm