Hello there everyone, my name is Learn2Eel and welcome to the first of two Dedicated Transport articles for my ongoing Astra Militarum Tactica series! Today sees the first fully fledged review of the famous Chimera that has been a staple of Imperial Guard army lists for several years, a tank that is only outshone by the Space Marine Rhino as the archetypal "transport tank". Even with a significant change in how the Chimera functions with the new codex, this is still the premier transport option for Astra Militarum armies and well worth the price. 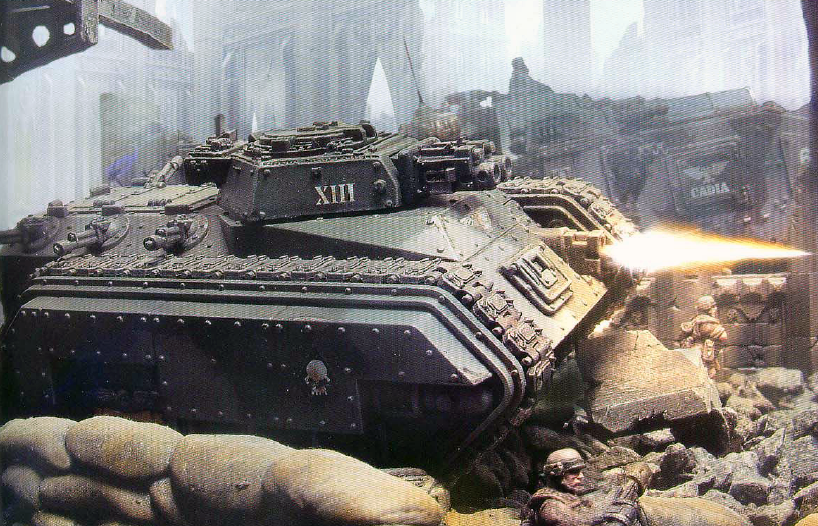 Overview
The Chimera is one of the most commonly seen transports in the game because of its great combination of firepower, survivability of a sort, above average transport capacity and widespread availability. This is all at a price that strikes a medium between the cheap but feature-lacking Space Marine Rhino and the costly but powerful Eldar Wave Serpent, giving Astra Militarum players an efficient transport option that has a cost suited perfectly to units such as Veterans. Being a tank and not a skimmer can be considered a down-side but the Chimera is certainly cheap enough to compensate for this, while its generalist shooting is more of an added bonus on a transport that should be constantly moving in the first few turns. Compared to a Rhino that has either a storm bolter or combi-bolter - depending on the alignment - included in its base profile, a Chimera combines a heavy bolter with a multi-laser; the latter of these is essentially a stronger heavy bolter that has inferior armour save penetration. The 36" range of both weapons combined with the Chimera's front armour twelve and the option to place a Heavy Weapons Team inside to use one of two fire ports can make for a decent static shooting unit(s), but generally speaking Chimeras are still transports first and foremost.

As a transport, front armour twelve with three hull points is certainly superior to a Rhino unless you are facing against multiple flanking units, though side and rear armour ten aren't great for a vehicle that is almost double the cost of the aforementioned archetype from the Space Marine codex. The firepower a Chimera provides should be considered as "additional value" rather than key components as by moving 6" a turn one of the two guns will be Snap Firing, while a 12" move ensures both have to Snap Fire. Once a Chimera delivers its embarked unit to their destination then its two weapons become surprisingly useful given how efficient they are at destroying light vehicles and taking wounds off of monstrous creatures. That the Chimera has two fire ports and a pair of lasgun arrays means a single Chimera and one embarked unit can potentially shoot at up to four different targets per shooting phase, certainly making it a far more fearsome option than something like a Rhino as far as presence in the Shooting Phase is concerned. Even though lasguns are pitiful and these are forced to fire at Ballistic Skill 3, that they can shoot at full Ballistic Skill even if the Chimera moves 12" in the Movement Phase can cause a few extra unsaved wounds here or there which is just icing on a unit this cheap that fulfills so many different roles.

With a carrying capacity of twelve, Chimeras can ferry any kind of Infantry unit you could imagine short of a Combined Squad or Conscript unit. The common choice is Veterans due to their proliferation of special weapons and improved Ballistic Skill 4, though having a Special Weapons Squad or Heavy Weapons Squad hijack another units' Chimera certainly isn't a bad option - just be prepared to sacrifice a Shooting Phase for the latter unit even if the Chimera remains motionless. For Veterans and Infantry Squads, however, this allows you to field an Independent Character - or two - such as a Lord Commissar inside the squad, a trait that Space Marine players have been demanding for their own transports for several editions running. Of the three Dedicated Transports in the codex, the Chimera is unique in that it is always equipped with smoke launchers and a searchlight which are both perfect for a transport with mediocre survivability. This is also the most widespread transport option in the codex and arguably the "staple" choice, meaning it can be used for almost any requirement you might have. Overall, the Chimera is a fine Dedicated Transport that mixes lots of Strength 5 and Strength 6 shooting with good front armour, making it the perfect choice for Veterans or Company Command Squads alike. On that note, the Chimera is also the only transport that allows an Officer model to issue Orders while embarked inside - this is crucial considering the fragility and value of Command Squads and yet another reason to use these instead of the new Taurox vehicles. 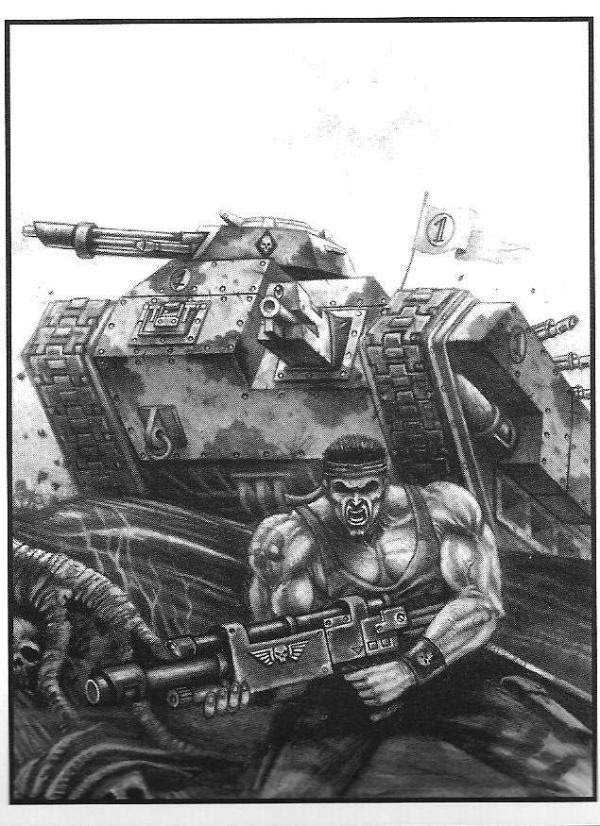 How to Equip Them
The key to the vast majority of transports in the game is keeping them as cheap as possible because they are solely there to provide mobility and an added layer of protection to the embarked unit; certainly this is no different with the Chimera. If there are any upgrades you should be taking for transports then it should be those that keep it moving, whether by re-rolling failed dangerous terrain tests or turning "Crew Stunned" results into "Crew Shaken" results instead. These include Dozer Blades and Extra Armour but both are avoidable if only because they are unnecessary - most game boards should have enough open spaces for Chimeras to advance through without risk of taking dangerous terrain tests, while "Crew Shaken" is far more common a result than "Crew Stunned". Upgrades like the Fire Barrels, Recovery Gear and Relic Plating are more useful for a typically close-ranged - transports everyone! - vehicle than something like a standard Leman Russ Battle Tank that sits at range because these will be drawing more close range shooting.

Still, I prefer to keep Chimeras stock because they aren't exactly cheap seeing as they double the total points cost of a Veteran unit without upgrades - you want these as cheap as possible so that you can take them in their multitudes, as is the Imperial Guard doctrine of warfare. As for the weapon options, I prefer the standard multi-laser and heavy bolter because three Strength 6 and three Strength 5 shots at 36" makes for very decent firepower on a transport. I avoid heavy flamers even despite how close a Chimera will typically get to enemy infantry units because of the likelihood of them being forced to snap fire and thus not shoot at all, while replacing the multi-laser for a heavy bolter isn't really a great trade I feel. The extra point of Strength makes a big difference when shooting at light vehicles which is amusingly a type of unit that Chimeras can bring down reasonably well.


Best Uses
While I hate to parrot on about the "netlist" builds because almost everyone invariably knows some variation of the force, it still bears mentioning that Veterans in Chimeras are undoubtedly the best application of the latter unit and probably the former as well. Chimeras may not be as inexpensive as Space Marine Rhinos but ultimately their function is identical, and that is to deliver a squad of highly damaging close ranged models to valuable enemy targets as soon as possible. Their front armour of twelve is great for an advancing transport, while two fire ports, a number of lasgun arrays and two long ranged guns on the chassis make it a surprisingly decent mobile fire-base. They are the perennial all-rounder of the Dedicated Transport options and perfectly complement the fragile Veterans embarked upon them. Alternatively, purchasing these for Infantry Squads and then hopping Special Weapon Squads inside is a decent option though ultimately this wastes the lasgun arrays. There are many nice little vehicle tricks that players use mostly with transports given their more expendable nature. 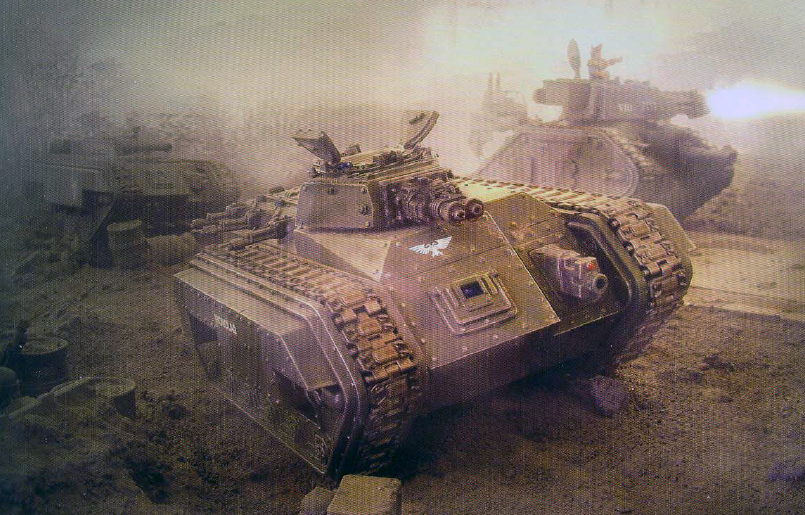 These tactics includes firing the disembarked unit at their target, then moving the transport in front of them with a Flat Out move to block line of sight and return fire to the squad; using the transport as moving cover for a more expensive short-ranged tank like a Leman Russ Demolisher - or vice-versa - and so on. For the Chimera specifically I would avoid pulling the trick involving deploying them with their long facing towards the opponent, then pivoting on the first turn to gain a few inches of "free movement" because of their weak side armour. Chimeras pay quite a bit for front armour twelve which is quite rare among transports - particularly for the Imperium - and leaving their sides exposed to first turn fire even if you are taking that first turn leaves them highly vulnerable to a Seize and subsequent destruction. There is nothing worse than a filled transport being destroyed or immobilized before it can move as both it and its embarked unit essentially become free points for your opponent. A nice trick to keeping Chimeras safe I have found is to run them in pairs adjacent to each other to present a wide "front armour" angle to your opponent and reduce the chances of their side armour being singled out, though obviously this should not be done against an army with units capable of destroying them in close combat or that has access to high Strength blast weapons. Hellhounds make for perfect companions to Chimeras, advancing further and drawing attention with their devastating anti-infantry weaponry.


Thank you all so much for taking the time to read this article! I hope you have found these insights into Chimeras and their many uses in an Astra Militarum army list to be provocative and inspiring. I wish you all a very nice day and keep on plugging those defensive lines with more Guardsmen!
at 7:48 pm