Hey guys, I've had a decent run-through of my local gaming stores' open copy of the new Necron codex and first impressions are absolutely high! Even if one ignores the incredible buffs the army (seemingly unnecessarily) received that sees them as probably the strongest 7th Edition codex overall, the codex itself marks the return of unit specific artwork in colour; each unit in the codex gets two separate pages, one with background and full-colour artwork and the second with all of their rules. Two of the biggest complaints about the new "stream-lined" 7th Edition codices is that they mostly removed unit artwork to instead have more organized unit entries, while the rules were generally middling in turn with stronger "balance" but less true stand-outs. The new Necron codex is pretty much the opposite in that it has the artwork back in - and yes, it looks awesome - while the entire army has essentially gotten way better, with almost no units or abilities actually "nerfed" saved for those that absolutely needed points increases such as the Annihilation Barge and Night Scythe. 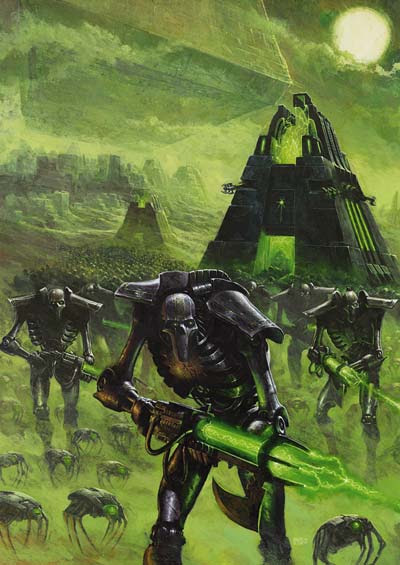 Still, there are so many amazing changes in the codex that I absolutely must go through in a future review; Reanimation Protocols becoming a super Feel No Pain roll, Decurion detachments and their associated formations providing ridiculous army-wide buffs, "Jump Shoot Jump" and 2 Wounds on Destroyers with no points change, Flayed Ones with 5 Shred attacks each on the charge with a Space Marine profile (less Initiative 2), Toughness 5 Wraiths that received no other changes or points increases, cheaper Triarch Stalkers that can be taken in squadrons and now provide +1 Ballistic Skill to all friendly Necron units within 6" and so many more. Even with just one look through the codex, it can be safely said that this is the best codex Games Workshop have done since at least the Eldar one in terms of rules, while it stands far above the other 7th Edition codices released so far in terms of artwork and actual print quality.

While I had little chance to really study the updated background, I assume it mostly borrows off of the groundwork the 5th Edition rework of the Necron "fluff" - I like both the old and new Necrons, so I'm happy either way in that sense. I also feel the codex has flavour in spades unlike the other 7th Edition codices with the unique Decurion detachment, all of the remaining army-wide special rules that have somehow improved with no downsides (unlike Synapse, Mob Rule and so on), superior Gauss weapons, each unit being competitive and useful in their own right and cool upgrades that make sense with the army. I can't wait to play against the re-imagined Necrons now as their 5th Edition codex already provided a pretty hefty challenge in 7th Edition, making all of the apparent buffs even more crazy in retrospect. In any case, I'll be doing a Unit Overview series for Necrons shortly after my Grey Knight review and I hope this mini-review has at least encouraged you all to take a look at the new codex and give it a try; you won't regret it!
at 5:36 pm