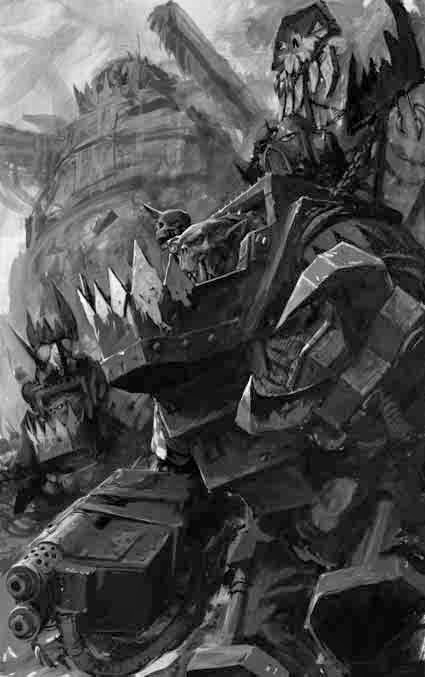 For a unit that shares the exact same basic stats as a squad that is less than half its cost per model, Meganobz are still astoundingly valuable models that act as the last word in crushing Ork charges - a hammer wielded by the Warboss himself, delivered when the opponent foolishly believes they are safe. Much like Thunderwolf Cavalry in the latest Space Wolf codex, Meganobz are easily the most points-efficient heavy Ork unit in the codex, delivering the goods both in regards to damage output and durability. While the army is entirely lacking of 3+ armour saves and pays through the nose just for a paltry 4+ armour save, Meganobz come stock with an awesome 2+ armour save which, considering they have 2 Wounds per model, ensures they are twice as tough as Space Marine Terminators against any shooting that isn't Strength 8 or otherwise inflicts Instant Death. They are about as resistant as one can get against small arms fire while AP2 shooting doesn't bother them nearly as much as it would regular Terminators despite the lack of in-built invulnerable saves, especially considering a Big Mek with a Kustom Force Field or cover are always options. That you can take a minimum of three in a unit much alike to Chaos Space Marine Terminators ensures you can tailor them to whatever role you need without having to spend excessive amounts of points for potentially diminishing returns - those poor Loyalist Terminators just don't know any better!

Meganobz are decent for an Ork unit in the Shooting phase despite remaining Ballistic Skill 2 seeing as they have Twin-Linked Shootas and can take incredibly cheap Kombi-Weapons but, of course, where Meganobz are at their best is undoubtedly in close combat where each essentially becomes a living wrecking ball smothered in blood and gore. While Meganobz share their 3 Attacks base with standard Nob squads, the latter unit has to pay through the nose for upgraded melee weapons and even then they will still have pathetic saving throws. The former gains an awesome 2+ armour save meaning they can tank almost anything thrown at them while still dishing out bucket loads of Strength 8 AP2 Unwieldy attacks; to be exact, each Meganob has four Strength 9 AP2 Unwieldy attacks on the charge due to Furious Charge. If a Super Heavy Vehicle somehow manages to survive a charging squad of even just three Meganobz, I would be greatly surprised; provided they aren't slain before they get to strike, there's almost nothing in the game that can stand up to that kind of power. Chuck in 'Ere We Go and Mob Rule which are both perfectly suited for melee and small Ork squads respectively and you have easily one of the strongest units available to Greenskin leaders. Heck, being all but immune to the automatic hits inflicted by the Mob Rule chart would be a good enough reason to recommend this heavily armed and armoured unit that somehow still fits into hilariously inexpensive Trukks, but generally speaking if you want anything removed from the table then Meganobz are among your deadliest tools for doing so. That they compare so well to Space Marine Terminators is always a good thing, being twice as tough to kill against non AP2 shooting, possessing superior melee prowess and access to cheap transports to make up for their lack of Deep Strike capabilities

While trying to figure out how best to equip standard Nobz can be an absolute nightmare due to the incredible range of options available to them, Meganobz are thankfully - or not - far more tame in that regard. Bosspoles are probably the only necessary upgrade with a one-per-three or one-per-five Bosspole to Meganob ratio being mandated depending on the unit size, if only because making sure you have the re-roll on the Mob Rule chart can prove absolutely pivotal in a given scenario. The two ranged options involve replacing each Meganobz' twin-linked shoota with a Kombi-weapon of some variety, ranging from Rokkit Launcha to Skorcha upgrades as the secondary weapon profile. Seeing as the Rokkit Launchas are not twin-linked and Meganobz cannot make use of Ammo Runts, I prefer the Skorchas here, especially as Skorchas are surprisingly cheaper for Meganobz than they are for almost every other unit in the codex. Meganobz still have more than enough attacks to cleave through even horde units easily, but they do come at a far greater cost per model meaning they are less efficient in the role than regular Nobz would be. The Skorchas allow them to clear out infantry waves and then focus on cleaning up what is left, before of course moving towards the nastiest or most valuable unit they can find.

Just keep in mind that as Meganobz are Slow and Purposeful, they cannot use their Skorchas in Overwatch and as such you should be sure to use them as soon as you can unless you actively want to get tied up in a melee - which if you have to choose between a slogging combat or facing down the barrel of a Helhammer Cannon, you pick the former each time. As for the pair of killsaws, they are an interesting but often unnecessary upgrade; I would take one or two per unit depending on whether the squad numbers from three to seven and so on, but generally you don't want to pay for them on too many more. The reason for this is that four Strength 9 AP2 attacks per model will annihilate almost any vehicle - even including Land Raiders that are AV14 on all facings - on the charge, meaning the Killsaws only really come into their own against Super Heavies and possibly Soul Grinders or other AV13-14 walkers. The extra Strength 9 AP2 attack through wielding a pair of melee weapons does definitely make Killsaws worth considering even if you don't want to target vehicles, especially as the Meganobz can't use their twin-linked Shootas in Overwatch anyway. Still, I think Meganobz are perfectly fine as they are without the upgrade and so saving points on what are already very expensive models is ideal; take a few pairs of Killsaws as necessary, but don't go overboard with them. 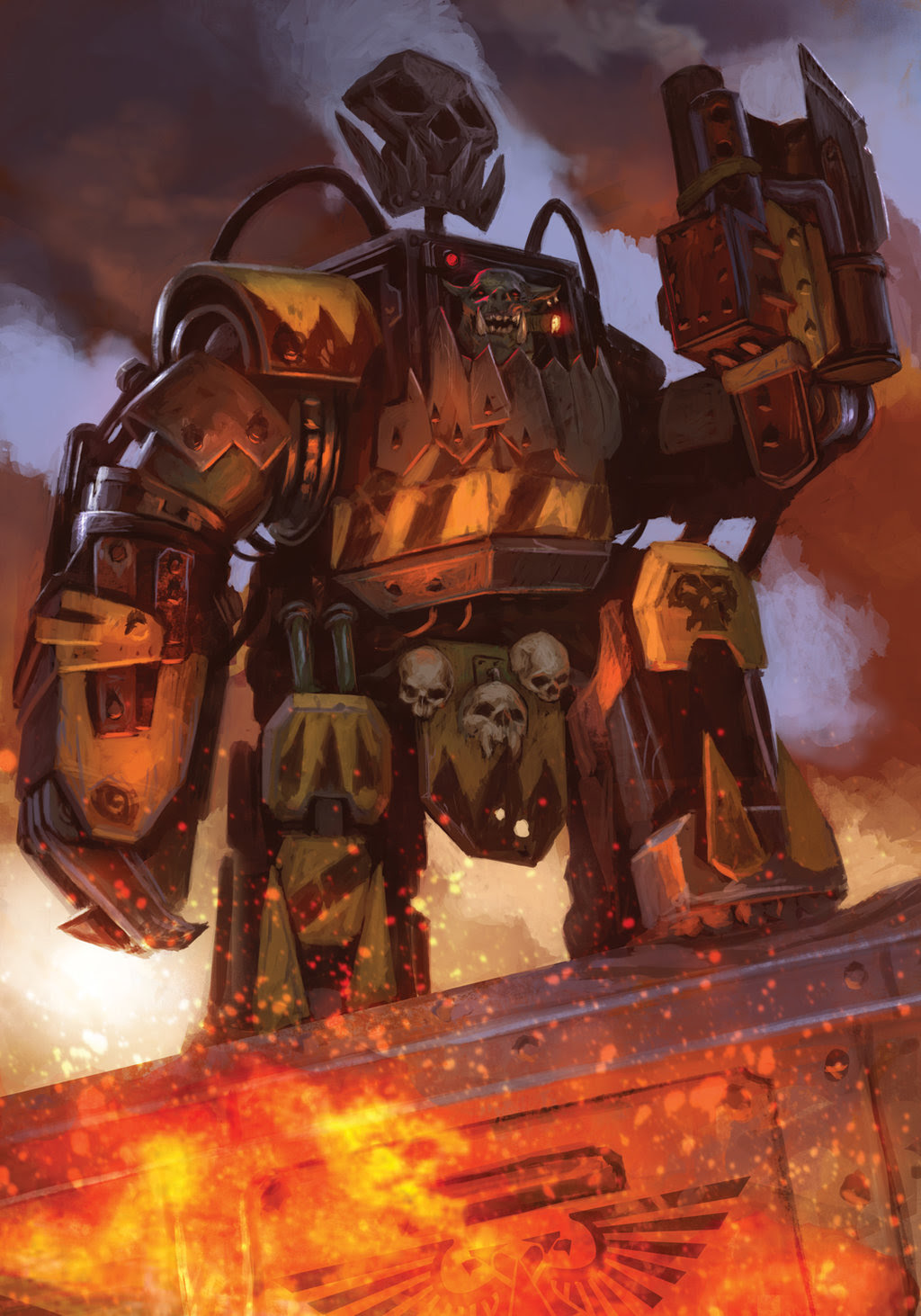 A key point to remember about Meganobz is that the innate three Power Klaw attacks of each Meganob and their 2+ armour save means they are definitely your best mix of damage dealing and survivability as far as dedicated combat units are concerned. They are one of the better reasons to include a Battlewagon in your list, though Trukks also work quite well for them as cheap, Fast transports with the high chance of it exploding really not fazing the 2+ armoured Meganobz. They also care nothing for Mob Rule chart results other than the ones that force them to flee as inflicting automatic Strength 4 hits on a unit that is as tough as it gets for Orks is almost a laughably minor downside to balance out them rarely running away. All this adds up to Meganobz being an aggressive short-ranged unit that you can send into almost anything and hope for success, short of course of far more expensive proper death-stars which Orks struggle to emulate.

The lack of a Waaagh Banner option unlike regular Nobz makes an attached Warboss with Da Lucky Stikk a very attractive option, though obviously at this point you will probably favour a Battlewagon over a Trukk to better protect your investment. Depending on the unit size, even a squad of three Meganobz in a Trukk can run through most basic infantry units from Tactical Squads to Howling Banshees by effectively providing the melee capabilities and survivability - against non AP2 attacks - of six Space Marine Terminators for half the cost. While they lack Objective Secured, much like Nobz they can easily tear apart units that do possess that special rule and take objectives for themselves as necessary, though obviously if you are playing Eternal War missions you may want to keep them moving so that their insane damage dealing capabilities aren't wasted.

There are many different ways to use the excellent Meganobz, but here are some of my preferred builds in case you wanted some assistance in that area;

Meganobz (3) - Two Kombi-Skorchas, one with Two Killsaws, Trukk (170 points) - This is the cheapest toolbox unit available to Orks and it really highlights how points inefficient and arbitrarily restricted Loyalist Space Marine Terminators are. The unit can clear objectives and horde units with pitiful ease due to their Kombi-Skorchas, while the pair of Killsaws provides insurance against AV14 targets or Super Heavy Vehicles. The Trukk provides them with much needed mobility at little cost while their 2 Wounds and 2+ armour saves allow them to survive overall punishment roughly equivalent to that of 5 standard Terminators. There's very little this unit can't do - targeting flyers is one of them - and you should always find some use for it throughout the game.

Meganobz (6) - Two Kombi-Skorchas, two with Two Killsaws, one Bosspole, Trukk (305 points) - Weighing in at just under the price of 10 Space Marine Terminators comes arguably the Ork equivalent of a death-star, packing in 12 Wounds with a 2+ armour save and the damage to cleave through anything any everything. The Bosspole provides insurance against the one Mob Rule chart result the unit fears, while the Trukk saves the Ork players a massive amount of points at the cost of reduced chances of properly delivering the unit to your destination of choice. That Meganobz are Bulky and nothing more while Trukks have no restriction on carrying such models is yet another reason why the unit just outshines Terminators in almost every way; I say "yes please" to more elite melee infantry in cheap Fast Vehicles! 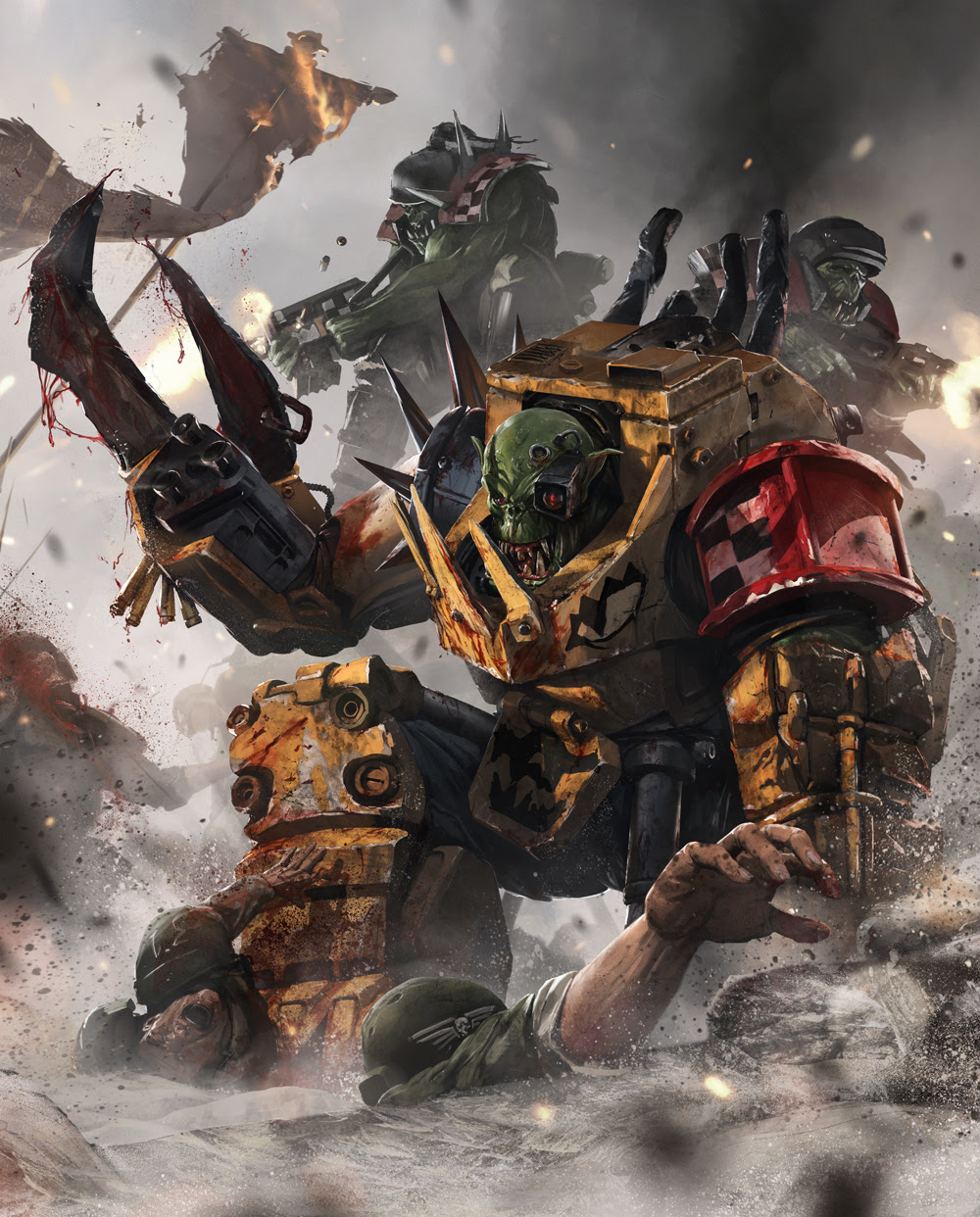 Thank you all for taking the time to read this latest entry in my Ork Tactica series! I have found lots of success with Meganobz and personally love their all-new plastic models, but generally speaking they aren't too much different compared to their 4th Edition codex incarnation when judged on their own merits. If you have any queries or feedback for me, please post them in the comments section below - we appreciate any and all feedback! Thanks again for your support and have a lovely day!
at 6:42 pm