Hello and welcome to the latest entry in my Ork Tactica series! Stormboyz are one of the more amusing choices in an Ork list, prone to fly off into the air and explode in a shower of green gore just as often as they crash into an unsuspecting foe with tremendous force. While not the most competitive choice and certainly not the ruler of the Orks' Fast Attack slots, Stormboyz are nonetheless a fun and cheap assault unit that exchanges a mandatory Trukk for their natively-equipped Rokkit Packs to accomplish a similar end result. I hope you enjoy this article!

The Assault Marine equivalent of the Ork codex, Stormboyz are in a unique position where they are functionally an ideal assault unit for the greenskins in the sense that you can run them as a horde without compromising on mobility whatsoever while being fairly priced in that regard, but they struggle to deal with certain key issues that plague most of the codex. One thing that becomes abundantly clear as you make an army featuring Stormboyz is that it is impossible to customize a generic character to properly fit in with the unit, leaving only the Warbike upgrade as an avenue for a Warboss or other such HQ choice to be attached to these impetuous Orks without slowing them down; even then, this upgrade is still obtrusive in its' total number of potential users. It can make it rather frustrating to tailor the unit to your needs, but ultimately the main problem that any Ork horde player that doesn't use a Green Tide can relate to applies here; a combination of Mob Rule and this editions' ridiculous ranged armies will make a footslogging horde balk. While the belief that you will lose as many Orks to Mob Rule as you will to actual shooting is very much an exaggeration, it is nonetheless a crippling issue that affects Stormboyz as much as any other Ork unit, if not more; that each model must take dangerous terrain tests as a result of using their Rokkit Packs in the shooting phase can potentially lead to even more unwanted (albeit unlikely) Mob Rule tests. Additionally, Stormboyz are in a strange spot where they aren't quite expensive enough to warrant you including a Fearless character, though they are costlier than regular Boyz and other units (depending on squad size) to make the lack of Fearless a potentially major issue.

Additionally, you pay for added mobility on Stormboyz which I feel is perfectly fine but this does not account for the fact that their durability doesn't improve whatsoever, meaning you lose even more expensive Orks just as quickly as your basic Boyz - and Stormboyz even lack the option to take 'Eavy Armour, though this does make sense from a fluff perspective. Negatives aside though, the unit has a lot going for it; Orks with the Jump unit type are no joke given that the only reason hordes aren't quite as fearsome as they used to be is their complete lack of speed in a shooting-oriented edition, something that Stormboyz obviously circumvent. They are slightly more brutal than Ork Slugga Boyz given that they can have Hammer of Wrath added in, while they have one of the largest potential charge threat ranges in the game if you combine a Waaagh! with their 2D6" run capabilities. They are a perfect size to act as screening units and cheap enough where you want to use them as a hard hitting distraction squad, adding to the threat overload required in a competitive Ork list. For only a few points more than a regular Boy, paying for a Rokkit Pack is well worth not having to worry about transportation even if they do use up a valuable Fast Attack slot and lack Objective Secured. These absolutely compare well to Space Marine Assault Squads and are also made even more efficient due to the combination of the Jump unit type with the 'Ere We Go! special rule, while of course being able to house hidden Power Klaws on a fast platform.

Considering that the only model in a Stormboy unit that has any access to wargear options is the Boss Nob, it probably comes as no surprise that the very first item I recommend for this unit is a Bosspole. A re-roll on the Mob Rule chart is crucial for any sizable Ork unit and this is especially the case with a unit such as Stormboyz that will usually be running around the battlefield with little regard for safety. From there, I consider a Power Klaw to be mandatory if only to give the unit some kind of punch against vehicles and tougher monstrous creatures, while it remains a high value upgrade in general to add to any Ork unit. Other upgrades for the Boss Nob can generally be avoided unless you have a specific combination in mind for your Stormboy unit. 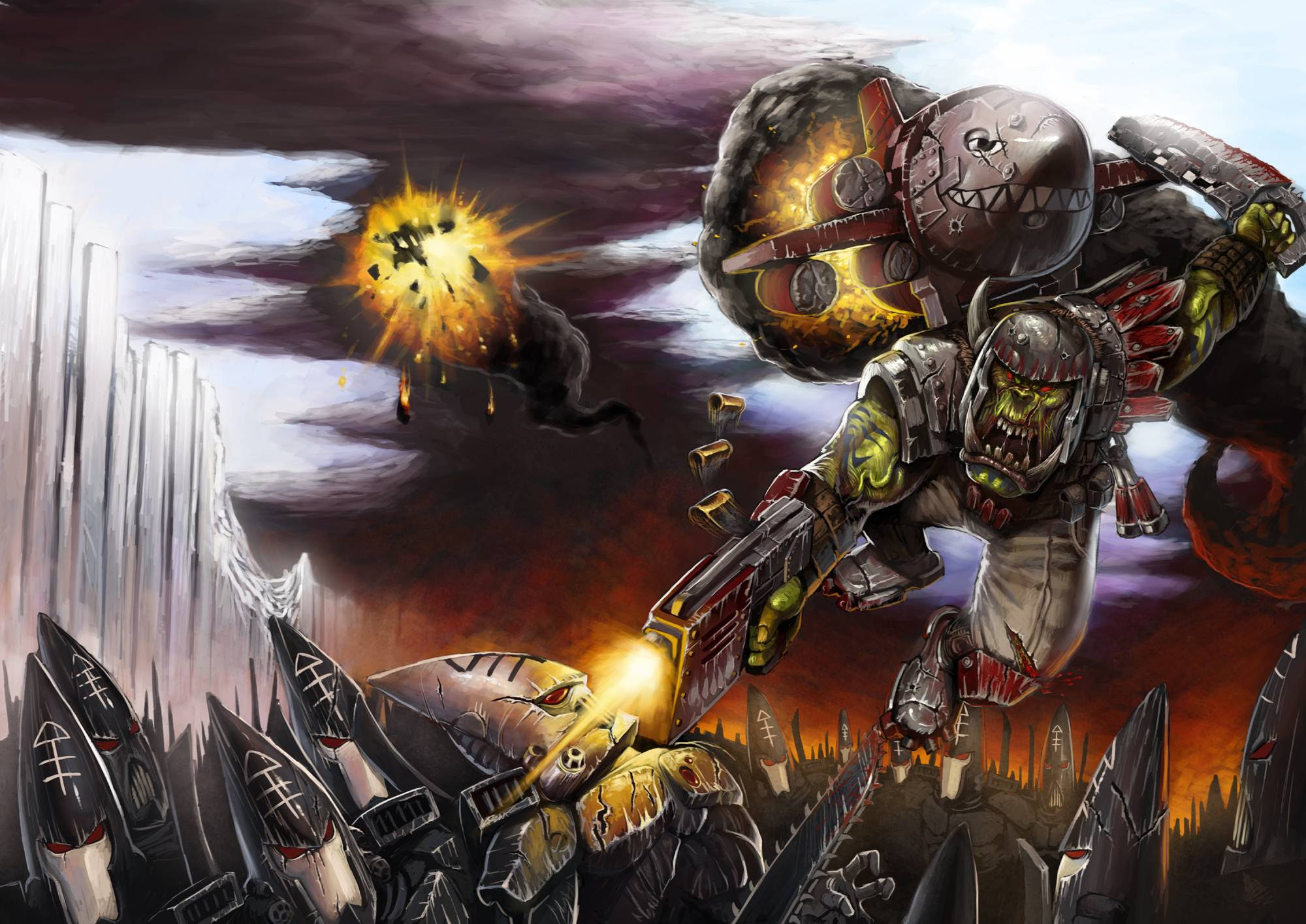 Stormboyz might not be comparable to a high value competitor like Canoptek Wraiths but they certainly have a lot of very good traits for an ideal assault unit; they are incredibly fast, are highly points efficient in terms of damage output and clock in at extremely low prices even when maxed out. Twenty Stormboyz with a Boss Nob wielding a Bosspole fall just short of the two hundred point mark, provide an insane amount of Strength 4 attacks on the charge with potential Strength 3 Hammer of Wrath hits and just generally help to flood the board with more threats and mobile objective takers. Their Rokkit Packs do lend themselves well to pointless suicide but generally speaking they provide Stormboyz with very good mobility in an edition that rewards that almost to a fault. I recommend using Stormboyz as screening units for the rest of an advancing ork horde due to their size and swiftness, while using cover to move safely where possible - you will lose a few of these to dangerous terrain no matter how you use them, after all. They can be used as tarpits that actually can keep up with Wraithknights and other Gargantuan Creatures or Super Heavy Walkers, but generally you want them to get into a melee they can win; as it stands, most units aren't tough enough to compete against sizable Ork squads and admittedly this has been the case for several editions running. A very interesting note here is that Stormboyz become an incredible threat when used in the same army list as a Warboss given that they can make a 2D6" run after first moving 12" and then still be able to charge in the same turn that a Waaagh! is called, making for an easy turn two charge on any game board and thus presenting your opponent with a reasonably priced threat they will struggle to ignore.

Here are some builds I recommend you try out for your Stormboy mobs;

Stormboyz (20) - Boss Nob w/ Power Klaw, Bosspole - This is a pretty standard configuration for Stormboyz that you will often see, mixing a large number of Boyz with a powerful squad leader that not only helps the unit get past the worst Mob Rule results but also gives them versatility in terms of what they can engage makes for a strong albeit pricey unit.

Stormboyz (15) - Boss Nob w/ Bosspole - If you are looking for a budget build with Stormboyz and want to use them purely as a screening unit, this is probably your best bet; the Bosspole, even for a more sacrificial squad, is still mandatory at just a handful of points.


Thank you all for reading this article! I am fond of Stormboyz in a way I'm sure most Ork players can relate to, even if they are rarely a part of competitive army lists nowadays due to their inherent fragility and how uniquely susceptible to Mob Rule tests they can be. Regardless, I hope you enjoyed this work and I look forward to hearing your thoughts on the infamous Ork Stormboyz!
at 9:28 pm