Hello fellow greenskin players and welcome to another entry in my Ork Tactica series! Today I'll be focusing on Deffkoptas, the Warhammer 40,000 definition of a pin-prick and one of the most efficient units in the Ork codex; they can zip around and bring you victory points like few other greenskin models. I hope you enjoy this article! 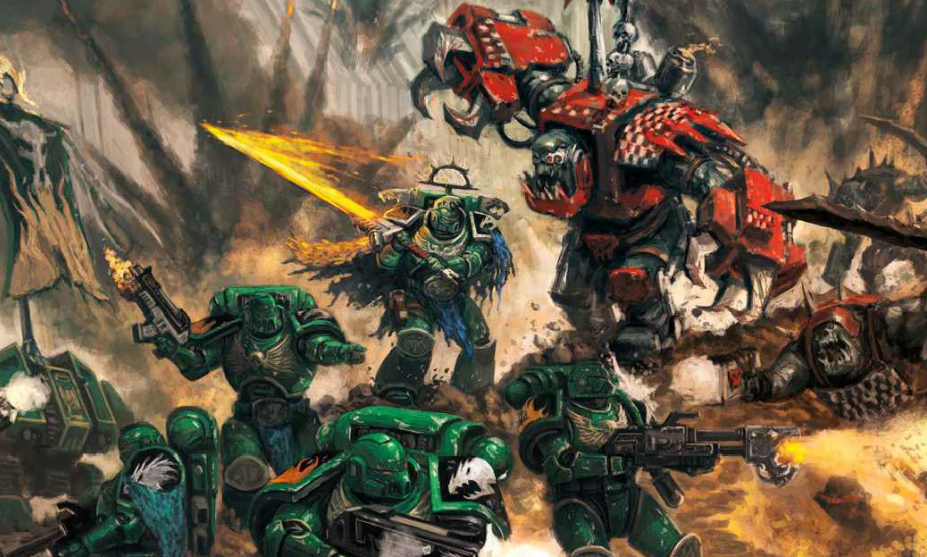 The idea of Orks - a species whose technology works only because their latest psychic abilities force crude contraptions to impossibly function - having Jetbikes despite the fact that the Imperium can seemingly only access one or a handful is a hilarious concept, especially as the greenskins have fairly good ones themselves. Deffkoptas about what you would expect of an Ork Jetbike; the base stats are very much in line with an Ork Boy, save that you improve his Toughness value to five and bless him with a 4+ armor save. A twin-linked big shoota in addition to a choppa round out the Orks' stock wargear, while on the special rules front he is suitably packed; 'Ere We Go and Furious Charge are quite a bit more valuable on a super mobile Jetbike than for a normal foot-slogging Ork! The additions of Hit and Run plus Scout make for an incredibly value unit that can escape combat in one out of three attempts, deploy very aggressively and generally get up right in the enemy's face with potentially very nasty damage output in a way that Space Marines can only really emulate with White Scars Attack Bikes supported by Kor'sarro Khan's army special rules. It comes as no surprise that the various wargear options available to Deffkoptas further improve their close-ranged threat with them being able to take nasty melee and ranged upgrades, the most popular of which is probably the twin-linked rokkit launcha which is a free exchange for the big shoota.

Adding some extra Strength 8 AP3 shots with re-rolls to hit at no additional cost is always a good idea for pinging wounds off of monstrous creatures or hull points for vehicles, while you can turn the Deffkopta into a nasty little close combat attacker by outfitting it with a Buzzsaw - a Power Klaw in all but name. Being able to take these either solo or in units really adds to the deployment flexibility of an Ork army by presenting the opponent with lots of little threats that are decently durable with Toughness 5 and 2 Wounds on top of possible Jink for either 4+ armor or cover saves, but they often can't be ignored due to the amount of Unwieldy Strength 7 AP2 attacks they can output on the charge as well as their twin-linked Strength 8 AP3 shots. Taking them in squads only increases their threat level to the opponent and also makes them susceptible to morale tests where the Mob Rule ability applies - and with no option for a Nob equivalent, a lot of the results are really bad for Deffkoptas. As such, I tend to prefer taking these solo as one alone can be enough of an annoyance to opponents regardless of whether you use the Buzzsaw or not given how good a free twin-linked rokkit launcha is, especially now that in 7th Edition they are also scoring and really cheap. Deffkoptas are amazing in Maelstrom of War missions given that they are Jetbikes with the Scout special rule, and they are tough enough that they can run into smaller units and tie them up with a chance of beating them due to Hammer of Wrath and three attacks at varying Strengths. I've nicknamed them "the Irritables" as they exist purely to annoy your opponent and cheaply get you victory points, giving them value beyond whatever damage they could deal out or firepower they can endure.

Given that the rest of an Ork army brings big shootas in abundance, making a free swap from the stock gun to a rokkit launcha is pretty much a no brainer. The kustom mega blasta seems like the better option because it is essentially a rokkit launcha with AP2, but the fact that it isn't twin-linked makes it hilariously inaccurate compared to the other two twin-linked choices; plus, having Gets Hot can add some unnecessary headaches to what is purely a cheap distraction unit. I tend not to bother with either the bigbomm or the buzzsaw as I find keeping Deffkoptas as cheap as possible is the best approach given that they are very likely to die if your opponent diverts any kind of semi-serious attention to them, and the former of the two upgrades requires the Deffkopta to move over a unit to actually use it. The Buzzsaw can turn a single Deffkopta into a one-Ork wrecking machine but "only" Strength 7 AP2 with three attacks is merely decent, plus one needs to consider that it almost doubles the cost of a Deffkopta; I would rather have two Deffkoptas with twin-linked rokkit launchas than just one with the same gun and a buzzsaw.

Your Deffkoptas really are designed as the ultimate in Ork distraction units, foraging ahead of an Ork force to claim objectives early into the game, slog a few high Strength shots at whatever target fancies you and just generally be a pest by blocking movement and impeding targets attempting to shoot at the rest of your army. They are fantastic at grabbing objectives because of their Jetbike movement allowing them to bypass all obstructions and get some early victory points in Maelstrom of War missions while also being easily able to get Linebreaker. They can be used to charge weak or small units that aren't very strong in close combat and tie them up for a few turns given how durable and thus tough to break they can be, while positioning them to attack the rear armor of vehicles with their melee or ranged weapons can easily be done from the first game turn onwards (not in the case of the former weapon type obviously). Even using them to babysit an objective that is out of the way of both players in an Eternal War mission is amusing enough, while Scouting onto the Relic and claiming it on the first turn only to begin moving back towards your deployment zone immediately is another astute tactic.

Here are some builds I recommend for Deffkoptas;

Deffkopta (1) - Twin-Linked Rokkit Launcha - This is undeniably the best use of Deffkoptas; it keeps them cheap and immune to breaking from morale, it makes them an annoying target but just not too strong so that they can be ignored and not become a point sinks, and one operates well enough at being an objective grabber.

Deffkopta (5) - Twin-Linked Rokkit Launchas - If you want to feel like the greener version of Eldar and have a very contested Fast Attack slot for your army list, a unit of five Deffkoptas can put out some serious pain on almost anything while still being hilariously cheap - they are half of three hundred orkarinos! The maximum unit size has one major benefit; an opponent needs to kill two of them to force a morale test, an advantage that only the single model squad shares.


Thank you for reading this article on Ork Deffkoptas! I'm a huge fan of this unit given its' many different uses in all levels of play combined with a super low cost per model for what they do. I'm eager to get my Ork Tactica series completed and hope to greatly speed up the individual unit reviews. Thanks again!
at 10:48 pm