Greetings my fellow wargamers and welcome to another individual character review in my Space Marine Tactica series! Today marks the first article to not specifically deal with the Ultramarines, instead giving an incredible White Scars character his due; Kor'sarro Khan, the Master of the Hunt. I hope you enjoy this compact look at one of the Knights of Chogoris! 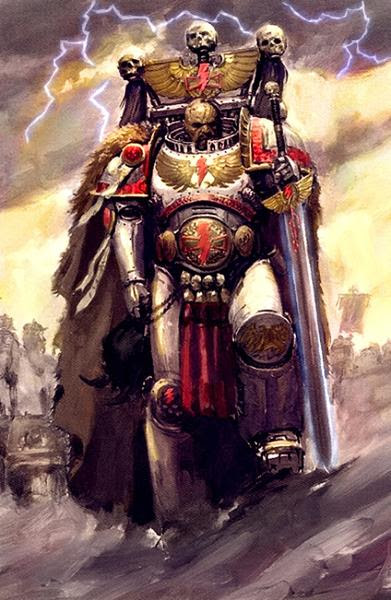 Despite previously being billed as a challenge-taker due to his now replaced Warlord Trait and equipment, Kor'sarro is much more of a support-oriented character that provides one specific albeit incredible buff to his attendant army on top of some decent close combat capabilities. His profile is in keeping with a generic Space Marine Captain, meaning he has above average stats for a character compared to his equivalents from other non-superhuman codices; he is decently durable and fairly capable in a melee. His ranged presence is not at all impressive as is somewhat the norm for Space Marine leaders with only a bolt pistol and an assortment of standard grenades, though if he is riding Moondrakken then he also gains a handy little twin-linked bolter which is super accurate due to the combination of his Ballistic Skill 5 and re-rolls on failed to-hit rolls.

The Khan can be seen as a fairly decent combatant for a Captain given that he is armed with what amounts to a special power sword much like Cato Sicarius; four attacks (three base plus having a pistol with a one-handed melee weapon) at Strength 4 AP3 with Weapon Skill 6 and Initiative 5 won't really set the world alight in this regard. However, he does have a few abilities that somewhat boost his close combat capabilities; he possesses the Furious Charge special rule to rack up a more noteworthy five Strength 5 AP3 attacks on the charge, while any 6s on to-wound rolls he makes wound the target regardless of their Toughness value and inflict Instant Death to boot. This is yet another throwback to Sicarius in the sense that the Khan has a means of dealing with 3+ armored monstrous creatures, albeit slightly differently; instead of making a single higher Strength attack, the Khan is reliant on rolling a natural 6 on any given dice roll. Still, against anything that does not possess 2+ armor saves or the Eternal Warrior special rule, the Khan should pull his weight fairly well and will scythe through non-elite units with the addendum that he struggles the tougher a foe is.

An important point to discuss is that the Khan lacks a 2+ armor save and is instead equipped with power armor, meaning his uses as a wound tank for Space Marine units are limited; he has nothing of note to set him out as being more survivable than a regular Captain, save that he can be mounted on a Bike. Speaking of which, you can purchase an upgrade for the Khan that functions as a slightly boosted Space Marine Bike; this increases his Toughness value to five and allows him to make D3 Strength 5 AP- Hammer of Wrath attacks on the charge, giving him a great deal more mobility, durability and damage output overall. Due to the White Scars Chapter Tactics taking the Bike option also indirectly improves on the Khan further, allowing him the aforementioned Strength 5 Hammer of Wrath attacks while he also benefits from the Skilled Rider rule; this allows him to ignore dangerous terrain and thus freely move around or through cover with no danger of losing wounds, while also adding a +1 bonus to any Jink saves he makes. Lastly, he also has the Hit and Run special rule which enables Kor'sarro to flee from combat when necessary provided you roll a five or lower on a separate D6 roll; this can be to escape from a dangerous melee and preserve the Khan, to enact a subsequent second charge on the squad to get all the charge bonuses again and so on.

The Khan has been molded into more of a support character with the latest codex, gaining the Champion of Humanity preset Warlord Trait; this forces friendly Armies of the Imperium units to re-roll most failed Leadership-based tests in a large vicinity, making Allied detachments that much more reliable for White Scars forces and generally reducing the chances of the army fleeing unnecessarily. However, what Kor'sarro is undoubtedly most famous for is his unique ability to allow all Bike, Rhino or Razorback mounted White Scars units to attain the Scout special rule, granting an incredible deployment advantage to a traditionally short to medium ranged force. It combines fantastically well both with Biker Troops in a Combined Arms Detachment or with a transport-heavy Gladius Strike Force, giving the army some incredible redeployment and mobility advantages that can lead to devastating alpha strikes and early board control superiority. Lastly, the Khan has a unique bonus for slaying the enemy Warlord in a challenge specifically; if he does so, he provides you with D3 bonus victory points on top of those normally provided for Slay the Warlord. While the Khan will struggle to deal with the tougher opponents, whether by being incapable of catching a Flying Hive Tyrant or beating a Chaos Lord in a duel, he can still punish the lesser combat commanders such as Autarchs or Tau Commanders and this is always something to remember as it can potentially make a huge impact on determining the victor in a given match. 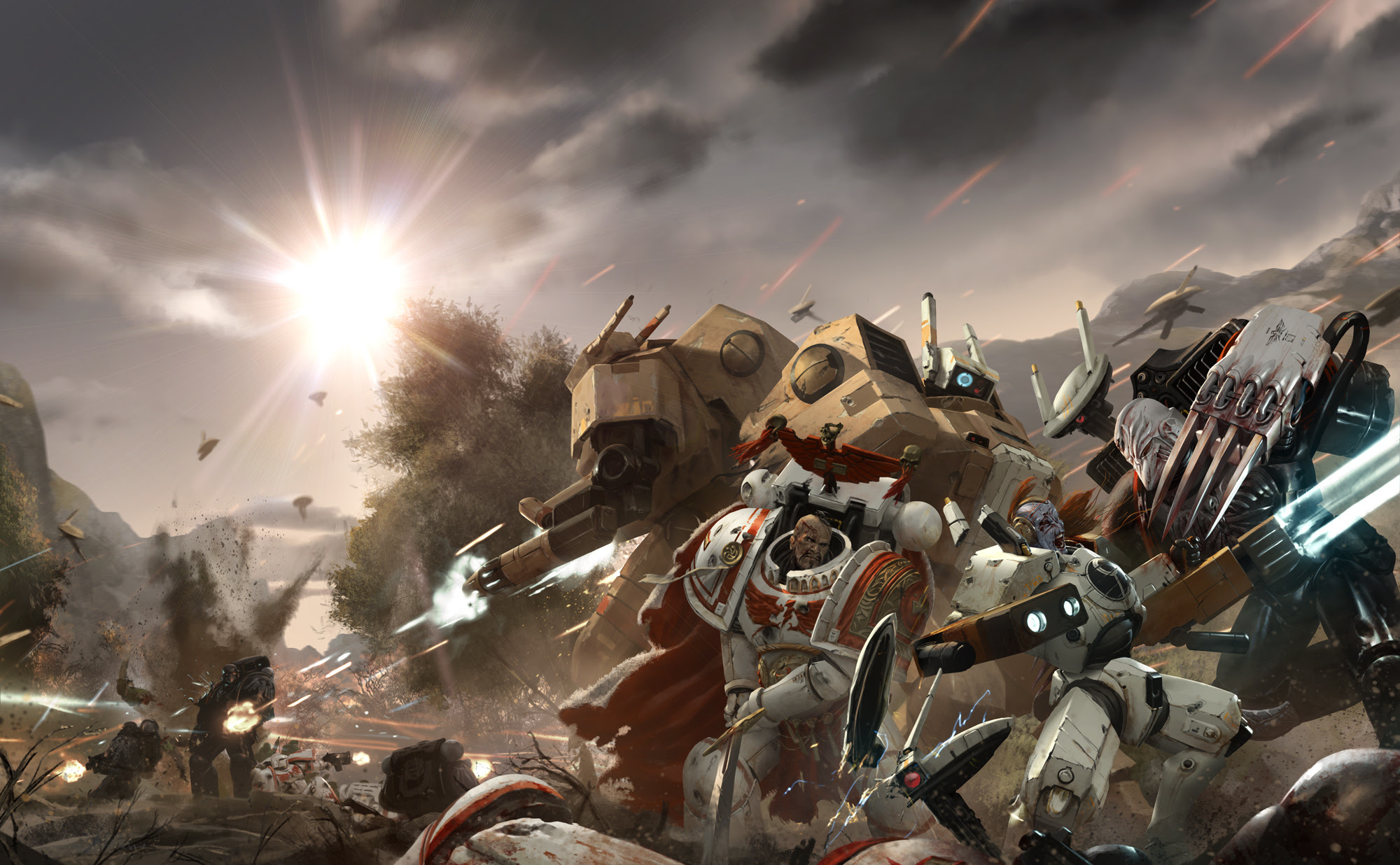 Ultimately this will depend on whether you take the Khan with Moondrakken or not as it directly influences which units he should join. If you use Kor'sarro without his famous Bike then you are best suited to some kind of melee-oriented unit as ultimately he only has one post-deployment buff - his re-rolling failed Leadership tests aura - and is otherwise just a melee-centric model, meaning you probably want a transport and maybe an Honour Guard squad accompanying him. If you instead elect to use Moondrakken then there are two main candidates; a Biker squad or a Bike-mounted Command Squad, either of which act as proper bodyguards to the Khan without really being billed as such and providing a mix of incredible ranged firepower and acceptable melee capabilities. In either case the Khan wants to be a fast-moving character that can get into combats against foes he can reliably compete against, meaning those that lack 2+ armor saves principally and aren't too much of a threat to him in the sense that they bring a mass of Strength 8 or AP3 attacks. Seeing as you can't really use him as a wound tank given he only has a 4+ invulnerable save on top of the usual power armor and three wounds, his positioning in a squad should be central or towards the rear so as to not unnecessarily risk taking Instant Death wounds on the Khan - seeing as he must be the Warlord to provide Scout to your force, protecting him as you would any other Warlord is mandatory.

The Master of the Hunt is lacking compared to a truly decked out melee combatant such as a Chapter Master armed with the Shield Eternal and thus should not be used if you want a beat-stick or wound-tank, but where his true value shines is in granting Scout to a wide range of different units. Giving a 12" redeployment to potentially close with the enemy, set up better firing angles, be in position to grab objectives early and so on gives some incredible flexibility to a White Scars force that deals in either massed Rhino-chassis transports or Bikes - as should usually be the case. This is especially true given how impressive Space Marines are in short to medium ranged engagements due to their Graviton weaponry and can set up a nasty alpha strike that the army is known for without even requiring the use of Drop Pods. You want him leading a Battle Company in a Gladius Strike Force for how super mobile the entire army becomes with the addition of Scout, or as a commander for a Bike-oriented force that plays to the White Scars' strength of anything that can be saddled. Elsewhere, keeping him primed to hunt down an enemy Warlord depending on how tough or well protected that particular opponent is can always be a potentially viable tactic given the bonus victory points the Khan provides, though applying a more reserved touch works too given the highly useful Leadership-based re-rolls he provides.


Thank you all for reading this article! Kor'sarro Khan is a truly fantastic choice for any kind of hyper-mobile White Scars build as he plays to the strengths of the codex, flooding the midfield with dependable and versatile infantry that can reliably deal with any threat. If you have any feedback for me regarding the Khan or my reviews in general, feel free to leave a comment below and I will do my best to address it. Thanks again!


Surround yourself with the greatest warriors at your command, or cower in the deepest and darkest hole you can find. It matters not. I shall take your head for the Great Khan and for the Emperor.
- Kor'sarro Khan, Captain of the White Scars
at 10:59 pm