Greetings fellow hobbyists and welcome to another entry in my Ork Tactica series, this time discussing the merits of Lootas. Possibly the true cause for the "Dakka" phenomenon, Lootas are a ridiculously efficient ranged unit that are known and feared by players of all persuasions. I hope you enjoy this article!

The majesty of Lootas is such that they simultaneously conform to the Ork mantra of randomness over competitiveness and yet still manage to be a great choice by any codex' standards, standing tall alongside Mek Gunz and others as premier selections in the Heavy Support slot of the Ork codex. They are essentially basic Ork Boyz that have been given the honor of wielding the chaotic Deffguns; on the former point, this means that they can defend themselves reasonably well in combat with Weapon Skill 4 and two Attacks each, though their Toughness 4 and 6+ armor save doesn't lend itself well to survival. You would think possessing heavy weaponry while having to work with the infamous Ballistic Skill 2 value of greenskins would automatically seal Lootas' fate as an inefficient gun platform but this couldn't be further from the truth due to the nature of their Deffguns. The smartly named weapons are Strength 7 and AP4 with a 48" range in much the same vein as an Autocannon, but unlike the bland Imperial technology a Deffgun fires a randomly determined number of shots each time it is used whether in the Shooting phase or in Overwatch. Though some would argue that having a guaranteed two shots per weapon has the natural advantage of consistency, it defies the Ork creed and removes the satisfaction of rolling high on that D3 for a unit and watching a fully sized Loota mob output a jaw dropping forty-five Strength 7 AP4 shots in one phase - even Legion Space Marines are jealous of that kind of high Strength firepower! As such, the answer to the problem of Ballistic Skill 2 is simple; high rate of fire backed by powerful stats, and it is a solution that works impeccably well in most scenarios.

Short of an AV14 vehicle or building, Lootas are capable of hurting darn near anything with their Deffguns and have the sheer weight of shots to force wounds and glancing or penetrating hits through until units' simply collapse from having to take more saves than they would think possible. Of course, their raw average numbers aren't necessarily that great; a medium sized unit of ten averages anywhere from three to ten hits, but the comparatively low points cost of the unit against what other armies' Devastator equivalents would have to shell out to match that kind of firepower generally ends up in the Lootas favor. The fact that a mere five Lootas can potentially put out as many shots as fifteen Lootas is why running them in almost any size is worth trying out. A few extra considerations are the presence of Stikkbombs as well as the usual Ork assault-oriented special rules such as 'Ere We Go, Furious Charge and Mob Rule - while charging Lootas might not be a bad idea in certain scenarios, it is often to your detriment as a mob cannot fire its Deffguns and launch an assault in the same turn and it doesn't take a genius to work out which of the two will deal more damage. Mob Rule does make them somewhat resistant to morale tests by virtue of bleeding models rather than outright fleeing as other Devastator equivalents are known to do, but it is at best a stop-gap solution as the Orks' low Leadership and poor saves will see them lose more of their number than should really be possible to those crippling Mob Rule tests. In any case, Lootas still set the standard for raw efficiency with high Strength shooting from mega long ranges - itself a blessing as they can stay out of the threat zone of most enemies and keep firing safely throughout much of a game - but are fragile and expensive enough that investing too heavily in them can be a very bad idea.

First up, I would personally skip the Meks for Lootas as you are ultimately trading some of the most points efficient firepower in the codex for a model that is only really good for repairing vehicles. While Lootas can often be found hiding in the confines of an open-topped transport, you would still rather have the extra shots in almost all cases; besides, if the unit is sticking to cover then the need for Meks decreases, while you can bring the Ork repairmen as slot-less tack-on's for a HQ choice. Consider also that a Mek is mostly a short-ranged model whereas Lootas are the premier long-range devastator equivalents for the greenskins. You simply don't need to spend points on a Mek for Lootas and certainly not on their upgrades as it is points that could be far better spent increasing the numbers present in a mob for greater damage output and durability. If you must take a Mek, give them either a Kustom Mega Blasta for a risky but rewarding high Strength AP2 shot or a mere Grot Oiler just to make their Repair rolls more reliably.

Don't let the standard Ork profile and the presence of Stikkbombs fool you, Lootas are a dedicated long range bombardment unit that specialize in killing light to medium vehicles, monstrous creatures and even flyers or flying monstrous creatures. The ridiculous amount of Strength 7 AP4 shots lends itself well to attacking almost any possible target by simply drowning them in wounds or armor penetrations, while the fact that they already hit on 5s due to that awful Ballistic Skill 2 ensures that opting to Snap Shot is rarely a major penalty. While I would still use your Lobbas and Kannons for hunting infantry and models with lower Toughness values, Lootas can still get that job done and have the advantage of AP4 on their attacks to scythe through the armor of most units short of Space Marine equivalents. On the flip side, Lootas are also one of the more fragile units in the game for their cost so expending resources or at least some modicum of effort to protect them is necessary to get the most out of those valuable Heavy Support slots.

Protecting Lootas usually involves keeping them in cover as you should with many Ork units, though Big Meks with Kustom Force Fields are an expensive option you may want to consider for the larger units; cover gives them a strong save in most cases but it is no defence against the rapidly increasing number of Ignores Cover attacks in the game. Using Battlewagons or Trukks to ferry the Lootas around and keep them away from close assault threats while also providing a bunker to shelter them against most types of incoming shooting is ideal based on the unit size, but the added points, vulnerability to template weapons and the awful mixture of Mob Rule and vehicle explosions makes their usage rather iffy. Keeping them in minimal unit sizes and sticking in ruins or other good firing positions is often enough as then they are an inexpensive mob that opponents may not perceive as a major threat and thus allow you to fire the Lootas more consistently; ultimately, I prefer the multiple smaller unit approach but if you do want to go "bigger" then invest in a Battlewagon and keep that mob near the back of your deployment zone where they can safely fire their Deffguns from afar.

Here are a selection of builds I heartily recommend for Lootas;

Lootas (5) - A popular usage of Lootas is in multiple smaller units to spread the Deffgun appreciation to the world of massed Rhinos and other light vehicles, being the most efficient way to either split or focus your fire as necessary. Also, one unit of five is not a large target for an opponent and doesn't eat up too much real estate and can thus be plonked in cover and left to move or fire as necessary.

Lootas (15) - Probably the more humorous and over the top usage of Lootas involve placing a large group of them in a Battlewagon, sitting them at the back of the board and unleashing 15xD3 (between fifteen and forty-five shots) Deffgun attacks when at full strength from a long range; devastation! 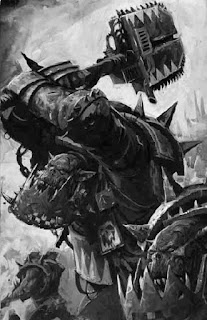 Thank you all for reading this article, I hope you enjoyed it! Lootas are a top tier Ork unit without a doubt and there are various ways to employ them relating mostly to their mob size, but in any configuration they are quite deadly indeed. If you agree or disagree, leave a comment below and I will do my best to address your opinion. Thanks again!
at 8:06 pm