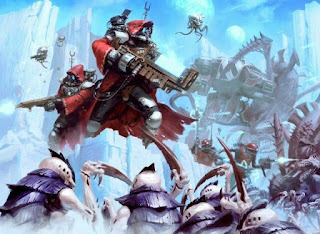 Skitarii Maniple - As the Skitarii elements of the Adeptus Mechanicus are incapable of satisfying the requirements for Combined Arms detachments, their codex offers a generic alternative detachment that works similarly. A minimum of two Troops are compulsory as you would expect but the lack of a HQ in the detachment means Skitarii require a smaller investment than nearly any other force to field a legal army. The Warlord, if chosen from a Skitarii Maniple, gets to re-roll a result on their codex-specific Warlord Trait table while also gaining the Preferred Enemy special rule - as a Skitarii Warlord will inevitably be a squad leader, this means any single squad of your choice will freely re-roll ones on failed to-hit and to-wound rolls with all ranged and melee attacks! The other Command Benefits and optional slots are quite distinct from a Combined Arms detachment as well, namely that the entire force gains both the Crusader and Scout special rules. When you consider that most Skitarii units are already incredibly quick and oriented around close-ranged fire-fights or assaults, the Scout buff in particular is very handy as it provides a free 6" move to every unit in the codex before the start of a match, allowing for small re-deployment or just some added mobility. It importantly does not let them Outflank as per the actual Command Benefit rulings themselves, but this can be circumvented through various Warlord Traits.

On the flip side with the Crusader special rule, making Run and Sweeping Advance rolls more likely to err in your favor is decent enough, obviously being aimed more at the assault units in the codex. The optional slots for the detachment are also very interesting and give Skitarii players a great deal of flexibility with which to build their army lists; up to one Fortification, six Troops, four Elites, two Fast Attack and four Heavy Support choices. Barring Sydonian Dragoons (which can be fielded in squadrons anyway), you can field large quantities of the same type of unit in an army list - you can feasibly amass a herd of twelve Onager Dunecrawlers or eighty Vanguard infantry with what is ultimately the standard method of army list construction available to Skitarii armies. Trading Objective Secured and a re-roll on the generic Warlord Traits charts for all of the aforementioned buffs is not a choice for Skitarii players but instead an inevitability of using the army but, honestly, it's not a bad trade overall.

Battle Maniple - Consisting of one of every unit in the Skitarii codex thrown together, the Battle Maniple offers the same benefits as the Skitarii Maniple; all constituent units gain Crusader and Scout (the latter not coming with the usual Outflank additive) and the Warlord (as well as his unit) benefits from Preferred Enemy alongside a re-roll on the Skitarii Warlord Traits table. Mixing up one of each of those units and removing the freedom to choose which you want to use or how you want to combine them in the Skitarii Maniple is weighed up against the Battle Maniple's unique special rule, Datalock. The sole benefit to using the formation as opposed to the generic detachment is that all models in the group benefit from Leadership 10 when they are within 12" of any of the one to three Onager Dunecrawlers found in the formation, a minor improvement over the usual Leadership 9 found with Skitarii squad leaders. I honestly don't think it is worth taking over a Skitarii Maniple other than for list-building convenience, especially as Onagers don't necessarily operate in the same area as most other Skitarii forces. Still, it is by no means a small benefit given that Skitarii units lack Fearless, Stubborn or any other type of morale-boosting abilities short of using Doctrina-dependent vehicle equipment; it's not a major detriment to you if you field it but nor is it strictly a great alternative.

War Cohort - Comprised of three Battle Maniples that I tend not to rate too highly mostly for being forced to use one of each Skitarii unit (which may not be to everyone's liking and is heavily restrictive compared to the Skitarii Maniple considering the sole improvement the Battle Maniple offers), the War Cohort has a massive base entry price of over 1500 points! A formation of this scale would normally have incredible benefits but the primary reason to field it, other than the special rules associated with the individual Battle Maniples, is that the entire army can benefit from any single Doctrina Imperative twice in a game - of course, you probably want to use this on an Alpha-level protocol. Considering it's primary competitor on such a scale is arguably the most over-powered detachment in the game (the War Convocation) featuring both Skitarii and Cult Mechanicus forces, I'm not really a fan of this formation even if having to take three of each Skitarii unit isn't as bad of a restriction as would be the case for some other aged codices. 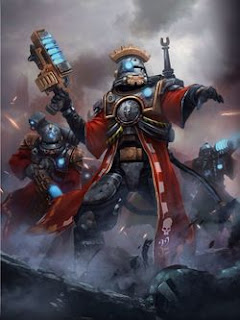 Sicarian Killclade - Though Sicarians are sometimes seen as dead-weight by others, I rate them fairly highly in the right hands given how deadly they can be as well as the fact that they don't require (or have access to, to be fair) transportation. This formation doubles-down on the Skitarii elite, consisting of a single Infiltrator unit and a trio of Ruststalker squads; quite a steep tax for a formation given their assault focus and fragility if I'm perfectly honest. However, there are some impressive advantages to fielding this army selection, namely that the Ruststalkers gain the incredible means to declare a charge in the same turn they make a Run move. When you consider that the Dunestrider rule combined with Crusader gives Ruststalkers an average total movement distance of 16", then an average charge distance of 10", the already deadly Ruststalker units become nearly impossible to hide from as they will have a reliable threat range of around 26". On the side of the Infiltrators, the less combat-oriented Sicarians double the aura range of their Neurostatic Aura from 6" to 12", generating a huge bubble of stat penalties that couple nicely with the many Ruststalker squads and their combat prowess. I think that the units involved in this formation will make it a turn off for many but if you are a player that gets good mileage out of your Sicarians then the benefits are pretty darned substantial to justify using such a large quantity of them.

Ironstrider Cavaliers - Taking another set of perhaps not supremely popular but still undeniably solid units and focusing exclusively on them at the expense of other squad types, this mixing of two groups of Sydonian Dragoons and one selection of Ironstrider Ballistarii is easily the cheapest formation to field with the Skitarii forces. The tall walkers all benefit from both Outflank and Acute Senses to strike from the flanks of the enemy advance and do so reliably, giving them the always appreciated additional deployment options that tactically-minded players crave, even if they are actually to place the entire formation in Reserves. They also gain re-rolls on failed to-wound rolls against a single character and associated unit of your choice selected at the beginning of the first game turn, meaning you can really pick apart a valuable opposing squad or solo character (like a Hive Tyrant) with greatly improved efficiency. Next, they ignore each other for the purposes of line of sight in two ways; they can see through one another to determine line of sight against enemies and subsequently do not grant cover saves to enemies for shooting through intervening units in such cases. You can play some really clever tricks with this rule by abusing the fact that opponents will likely not be able to see the rear-positioned walkers, something that you can logically take advantage of with forward roving Sydonian Dragoons that feature in-built cover saves providing protection to the Ironstrider Ballistarii.

Lastly, the aforementioned Outflank and Acute Senses buffs are given further reinforcement by the aptly named The Noose Tightens special rule; the formation having to arrive from Reserves as mentioned earlier is a bit of a downer, but it isn't as bad as you might think once you realize that the entire formation only requires a single Reserve roll to arrive and is capable of doing so from the first turn onward. All in all, it's a fairly interesting formation with the emphasis placed on ham-stringing key elements of an enemy force with the sole offensive benefit functioning against both a character and their attached unit - if any - unlike many other 'assassination' abilities. Reliably, albeit still randomly, determining the side from which the formation arrives from, whether it be on the first turn or later on, contributes to this by giving the close-ranged Dragoons their chance to apply early pressure where needed. It's an inexpensive formation given that you can field one-vehicle squadrons for each of the three required units and it is darned efficient, especially with both Dragoons and Ballistarii possessing the Dunestrider rule to easily get victory points throughout the game if left unchecked. 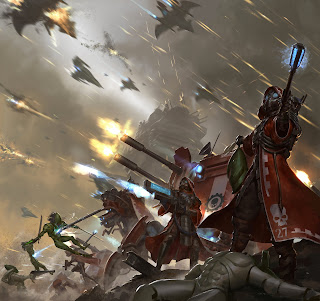 Thank you all for reading this article, I hope you enjoyed it! I'm pleased to have marked the closing of another long-winded series with an eye to the future; the Cult Mechanicus, more Legion reviews, analyses of the multiple armies featured in the upcoming General's Handbook and plenty more besides. It's going to be one heck of a year, especially if the rumors regarding the Thousand Sons releases come to fruition; in any case, I look forward to reading your feedback as always. Thanks again!
at 12:17 am