I AM THE GREAT BIG MOUTH! 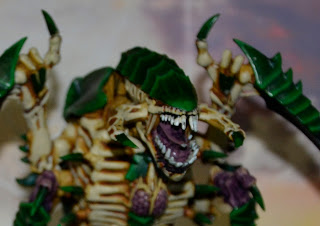 Megavalhalla, the loathed, nerd by night, hedonist, sullied and an ingenious monster of all games…
Enough narcissism for one day, today I bring you my most precious of all armies… the Tyranids. It all started way back in 2011 (100 years in internet time) when I was looking for something new and fresh, something radically different from the rest, something to test my abilities… then I came across the brand new Trygon kit… and I have never looked back.


The Tyranids themselves are a very unique army and look easy to use, what with all their impressive stat lines and big monstrous creatures with the possibility of making horde lists… but therein lies the challenge. My first attempts were futile… pathetic, my army just wasn’t up to scratch and got obliterated. Why? My list was all over the place… with no consistency, there was a little bit from all over the codex, yet my Trygon was the star of the game and the only unit left on the board (with one wound remaining) so from that game on I decided to make an army with nothing but big bugs… and I mean really big bugs.

My next game fared better, a lot better. The list was balanced and dedicated to one thing and one thing only: Big bugs and charge them straight at my opponent. Which was brilliant… 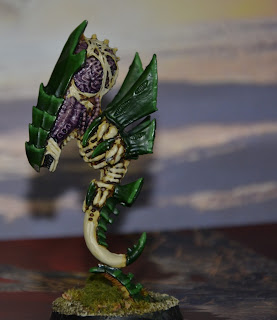 it worked. I smashed aside every opponent possible, Nurgle marines, Necrons, Blood Angels, Space Marines, Orks and even put them to the test at a local GW store in an apocalypse game where they managed to hold the centre and eat everything in their path… ah, good times.

But since I have barely even played a game of 40k and miss it sorely and have only really had the time to read and paint here and there. Though I have managed to come up with a new list:

I am yet to see how this will perform in 6th edition though I have a feeling it should perform splendidly… please feel free to criticize me in the comments below. It is very similar to the list used in 5th edition, except without the Tyranid Warriors and this list has more of a horde aspect to it all, since I am not regular player I cannot comment too much on the list itself and what upgrades will be used but I am a fan of “tried and tested’ before anything else, theory is all well and good but we have to remember that Communism also works well in ‘theory’.

I am very much looking forward to the next GW release of Tyranids (Black Templars too!) and I will be seriously pissed off if the Harridan is not released and another giant bug is also on the menu 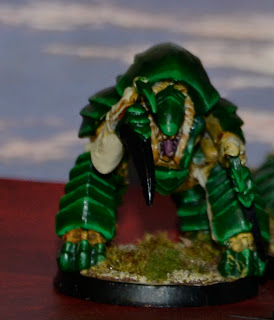 (with all the new big things being released I presume that there will be) but I have no idea when the next big thing is.

Every unit in the codex is really good when used correctly but I feel that every Tyranid player needs to be aggressive in their approach to playing, hanging back and playing defensively will just not work at all. Ever. Period. They do not have the guns and firepower, so try and utilize a mix of speed, aggressive tactics and a few units dedicated to shooting (Zoanthropes are an unbelievably good option), well just about everything can shoot something but cannot hope to match armies such as Tau and Necrons, so hit hard and hit fast. Shooting will soften them up yes, but will break them down entirely.

I loved painting this army, it was really easy to paint and come up with the paint scheme, I imagined them attacking a Jungle planet, a remnant splinter fleet from Hive fleet Behemoth (which does explain all the big bugs, or at least it does in my mind anyways) and with all the natural bio-resource around it was easy for them to grow the big buggers, which also explains the camo style paint scheme. The paints were easy to choose from and the paint scheme is as follows: 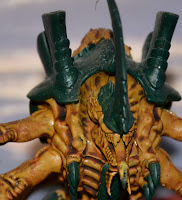 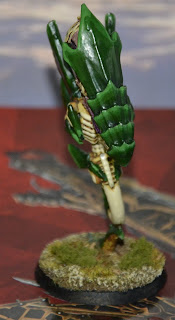 3. Caliban green on the carapace.

4. Mix Warpstone glow with the 3rd step and layer it on until you get to pure Warpstone glow then add some white to it for a final highlight; this should be a smooth 'feathering' effect.

6. Tallarn flesh for the fleshy bits then a wash of Druchii Violet to finish it off


And you’re done! How easy. You can color the teeth and the eyes any color you wish… well that’s it for me today guys enjoy the eye candy… may the galaxy forever be edible and yours to consume. Bon appetite. 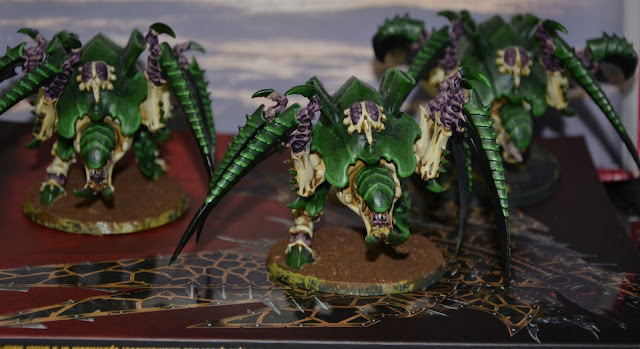