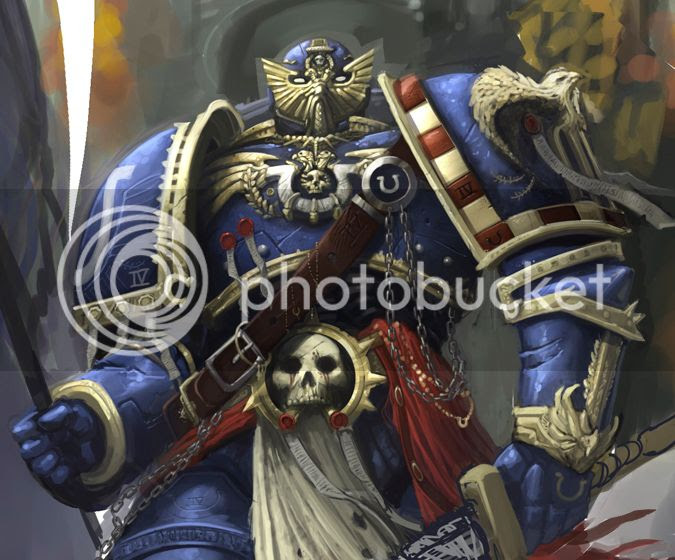 Through the folly of heretics and the trepidations of Xenos, one Chapter has stood above all others as the clearest example of the Emperor's will. Their deeds unmatched and strategic genius unparalleled, the Ultramarines represent the calm genius of the Emperor, able to influence and build civilizations as equally as he could defeat an opponent through intellect and skill. They are not mere warriors, but strategists, teachers, artisans and leaders. It is believed that the Emperor's will was for their progenitor, Roboute Guilliman, to lead the Imperium in his stead, and thus far the Ultramarines have lived up to the legacy of their most revered Primarch. On the battlefield, they are as calm as they are brutal, masters of all forms of warfare; with blade and bolter, all Ultramarines from mere Initiates to the Masters of the Chapter are drilled to slay in every possible manner. With their strict adherence to the Codex Astartes, the Ultramarines are the most flexible fighting force among the Adeptus Astartes, and their many deeds and successor Chapters are proof of the strength of their fighting philosophies.

Combat Doctrines - Ultramarines are unique among the Chapters - first among equals! - with their Chapter Tactics being a range of one-use abilities that apply for a single game turn, rather than flat bonuses that are always active. This places an emphasis on planning ahead of time to make the most benefit of each of the three Combat Doctrines; Tactical, Assault and Devastator. The more units that can benefit from them at a given time, the more valuable the Combat Doctrines will be; with this in mind, you generally want to have very synergistic army lists to exploit this, either through massed mobile units in transports, or many long ranged units. As well, Marneus Calgar and Varro Tigurius in particular play really well alongside these Chapter Tactics; Tigurius, for example, can give drop-podding Sternguard his Storm of Fire Warlord Trait instead of using the Tactical Doctrine, but instead use the Devastator Doctrine so that they can benefit from boosted Overwatch. Calgar gets to use any one of the three Combat Doctrines twice which will generally be best used with the Tactical Doctrine to give re-rolls to hit of ones across the army for two entire game turns. Using this once the army has gotten into 24" or shorter range should prove to be brutally effective.

Tactical Doctrine - This provides units re-rolls of 1s in the shooting phase, while Tactical Squads instead re-roll all failed to hit rolls in the shooting phase. Applying only to shooting - obviously - this is best used once your Rhino-mounted troops have disembarked en masse, or when most of your Drop Pods have arrived. The shooting bonus it provides is massive for all the infantry units in the army, particularly Sternguard Veterans in a Drop Pod Assault and Tactical Squads.

Assault Doctrine - This provides units with a re-roll for their charge distances, while Assault Squads, Bike Squads and Attack Bike Squads - but not Scout Bike Squads, oddly - instead benefit from the Fleet special rule. This is obviously best used in conjunction with Land Raider or Stormraven-mounted close combat units such as Honour Guard and Assault Terminators, as well as scoring Bike Squads in addition to Assault Squads, to ensure your key charges actually go off. Having Assault Squads able to move 12" in the movement phase and still re-roll their charge distance in the same turn provides a one-turn equivalent of Raven Guard Assault Marines. This usually means turns two to three are the best times to use the Assault Doctrine. In regards to Bike units and Assault Squads, the Fleet bonus is there to allow them to re-roll their Run distances, giving them a bit of an extra speed boost in the first turn to ensure a turn two charge. This is useful more for Assault Squads who are typically armed only with pistols, whereas Bikes probably don't want to give up their shooting.

Devastator Doctrine - This provides units with re-rolls to hit on their snap shots, and it also handily applies to Overwatch, while Devastators also - not instead of - benefit from Relentless unless they disembarked from a transport. This is best used on a turn where many of your uni
ts are about to be charged; against Tyranids and Orks, this would usually be about turn two at the earliest, with turn three being the norm. It also provides huge defensive boosts to units jumping out of Drop Pods or just generally arriving from Reserve. That it applies to all snap shots allows Devastators disembarking from transports to at least have some margin of success, though it is probably far better used to destroy flyers through massed ground-based shooting. The boosts to Overwatch alone are really strong and could lead to numerous failed charges for an opponent, so keeping this one handy for when you feel your opponents units are about to charge you - remember, Doctrines are used at the start of your turns - is key.

Experience and many trials have led to competitive army lists for each of the Chapters, and they usually revolve around a strong core of units unique to each list. This is the beauty of the Space Marine codex; so many units are affected in a staggering number of ways by the different Chapter Tactics, improving their viability exponentially based on the choice of army. For Ultramarines, I have listed three units that pop up in many of their builds in some form. Please be aware that these aren't necessarily the strongest units available to Ultramarines or the ones that receive the most benefits from their Chapter Tactics, but some of the most common that I have seen.

Varro Tigurius - Tigurius was very much a non-competitive choice in the 5th Edition codex, with below par staying power and very little to justify his incredibly high cost over a regular Librarian. The new codex shifted this completely to the other end of the spectrum, with access to all five rulebook psychic disciplines, a strong Warlord Trait, a massively reduced points cost and a bonus to reserves. He is the master of psychic versatility, and he is so darn cheap that he is easily one of the best HQs in the game. That he is an Ultramarine is almost secondary, seeing as nearly any army list regardless of Chapter Tactics can benefit massively from his inclusion. In fact, many players using other Chapters as their Primary Detachments regularly take an Allied Detachment of Ultramarines just to employ Tigurius! He is an amazing unit and one of the corner-stones to competitive Ultramarines play.


Tactical Squads - While many have sworn by Bikers in the new codex as their primary Troops choices - and with good reason - Tactical Squads are still a great unit in the right hands due to their sheer versatility, and nowhere else can they receive so many buffs than with Ultramarines. Each of the three one-use abilities gives Tactical Squads a huge bonus, from re-rolls to hit in shooting, to re-rolling to hit with snap shots which, as a mostly short to medium ranged unit, suits them perfectly. They are best used alongside Marneus Calgar in either a Drop Pod or Rhino heavy army list, where his expanded usage of the Combat Doctrines and God of War special rule allow them to outsmart and outperform so many other comparable units.

Sternguard Veterans - Even despite the increase in cost for running a unit packed with combi-weapons, Sternguard Veterans remain one of the most versatile infantry units in the Space Marine codex. With their brutal firepower and high cost, they make the perfect target for psychic Blessings and army bonuses; luckily enough, the Ultramarines play host to Varro Tigurius, the best unit multiplier in the game. Combine the two and it will lead to so much carnage that they are worth the expense every time. The benefits from the Chapter Tactics also synergize very well with Sternguard in Drop Pods, from re-rolls of ones to hit on the turn they arrive, to re-rolling to hit in Overwatch.

The key to competitive Ultramarine lists I've found is maximising on their sheer versatility, with the various Combat Doctrines and their one-use-only limits really favouring more mobile lists. Drop Pod lists with Marneus Calgar or Varro Tigurius are very strong indeed, while Rhino-based builds can also do really well as rushing mechanized lists. Here is an example of such an army list that is fun to use and should do pretty well for itself overall.

The three Tactical Squads provide flexible scoring units with two plasma weapons for general use against monstrous creatures, elite infantry and light vehicles. Thirty scoring bodies is a good number for any Space Marine list, and they have mobility and protection through the Rhinos. The two Thunderfire Cannons provide artillery and covering fire for the advancing Rhinos, disrupting infantry formations and forcing them to disperse, making the more valuable vehicles and monstrous creatures vulnerable to the reserve units. The drop pod for the Thunderfire Cannon is used empty so that both the Sternguard Veteran units can make a Drop Pod Assault on the first turn. Marneus Calgar joins one of the Sternguard Veteran units, using his God of War and extra Combat Doctrine to boost the first-turn firepower of the Sternguard Veterans through the Tactical Doctrine, and then use it again for the Tactical Squads when they close to short range. He uses his Armour of Antilochus to provide a Teleport Homer for the Terminator Squad, using their assault cannon and storm bolters to provide pin-point firepower into the rear armour of a vehicle or into infantry at close range. With Calgar and the chainfists on the Terminators, dealing with any kind of armour after the initial "melta drop" should be easily handled. This is a well balanced army list that is very mobile and versatile, with perhaps its only real weakness being against flyer-heavy armies - still, the two Tactical Doctrines available to Marneus giving all those units re-rolls to hit (either all or just ones) should help on that front.

I hope you enjoyed the first in a series of seven articles covering each of the distinct Space Marine Chapters represented in the 6th Edition Codex: Space Marines! The Ultramarines are the favoured sons, the poster boys of the Space Marines, and they are both beloved and despised for it. Regardless of how you feel towards them, though, their history of success cannot be denied. I hope this article helped you to better understand how to use these peerless strategists in the name of the Emperor!

For more discussion on Ultramarines and other Space Marine Chapters, visit the forums over on +Bell of Lost Souls or view our Space Marine Tactica series. Have a lovely day! Eel out.