Hello there ladies and gentlemen and welcome to another addition to the Tactica: Astra Militarum series! This time we will be looking at the Defender of Cadia and Supreme Commander of the fight against Abaddon's 13th Black Crusade, Lord Castellan Creed. I hope you enjoy this article! 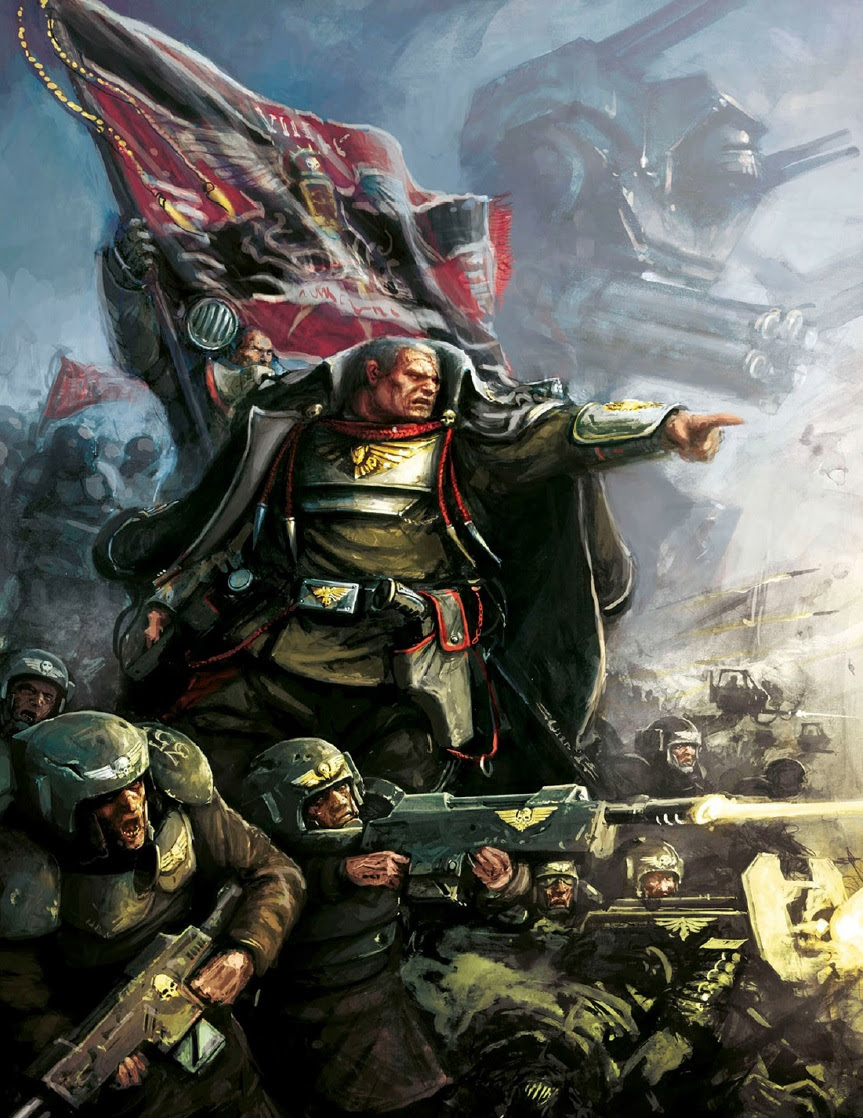 To review the Lord Castellan is to directly contrast his worth against a standard Company Commander; after all, what is Creed if not an upgrade character over the leader of your Command Squads? Unfortunately, I feel that Creed really doesn't justify his staggering points cost - relative to a Company Command Squad - enough to see regular competitive use outside of a few very specific builds. Regardless, what he brings to the table is undeniably impressive.

Creed uniquely has Leadership 10 as a Warlord option in a Company Command Squad, something you would usually have to employ Commissar Yarrick or a Lord Commissar to achieve. While this sadly won't help out friendly units for the purposes of Orders, certain Warlord Traits available to Creed through the Command table can really make the most out of this for your regular infantry.

Of course, Creed wouldn't be so famous if it weren't for his Strategic Genius and ability to inspire his soldiers to greater acts of service in the Emperors' name and thankfully at least one of these is still present in the new codex. Gone is the ability to freely Outflank a single unit of your choice, but Creed may now issue up to three Orders a turn and still counts as a Senior Officer for the purposes of using higher tier Orders. This is a fantastic ability alone but when combined with Creed's special rule that forces all failed Orders he issues to be re-rolled, Creed quite easily stamps himself as the best Officer character in the codex purely in terms of successfully issuing Orders.

While an almost army-wide Leadership 7 or so isn't great, giving each of your units what amounts to a free Vox Caster is immense and effectively doubles your chances of getting an Order off. That Creed can issue three a turn naturally and potentially up to four with the right Warlord Trait allows him to freely buff so many of your units to ungodly levels.

Creed has a few other very nifty traits that help stamp out a place for him in the codex as a bit more than just an expensive upgrade, and chief among these is his ability to generate two Warlord traits. Creed can either generate one each from two separate tables or both on one chart - generally speaking I prefer to attempt to maximise Creed's insane potential with Orders by rolling twice on the Astra Militarum Warlord Traits table. This is because the last two results both boost his Orders even further by allowing him to issue up to four and increasing the range of these by 6" to a total 18" bubble.

While Preferred Enemy and Relentless won't really help a Command Squad unless it is joined by a Master of Ordnance, the other traits are also useful either for reducing the amount of morale checks your squads have to make or allowing up to D3 units in his detachment to Outflank. The last of these is obviously a boosted version of his old unique ability with a restriction on it affecting his detachment only, though being available to Creed based on a random roll is nice enough I guess. 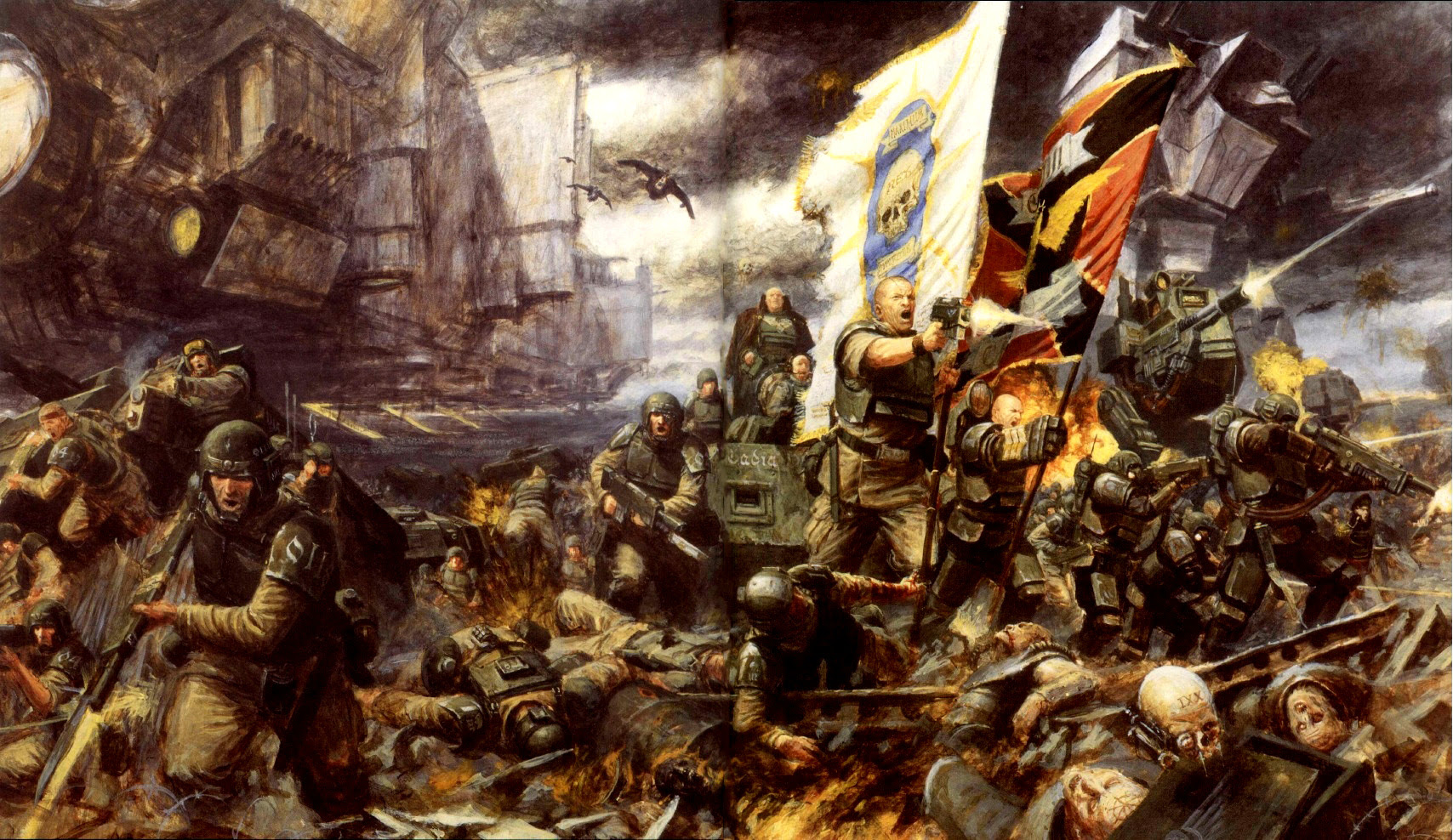 Where Creed starts to fall down is when one considers the value of Orders issued by multiple Senior Officers versus those taken by one model. Creed's exorbitant cost exceeds that of a standard Company Command Squad and he even replaces the Commander rather than simply being added to the squad. For the price of Creed, you could take two Company Command Squads and have the points spare to give one of them a Master of Ordnance or a few other upgrades. While Creed does offer a discount in regards to Vox Casters by forcing his unsuccessful Orders to be re-rolled, a pair of Command Squads can issue up to four Orders a turn and has double the survivability by spreading these out over two units.

Creed can issue three a turn but has identical survivability to a Company Commander that purchases cheap Carapace Armour, and he is a huge points investment for a single unit comprised entirely (unless you count Nork Deddog) of Toughness 3 models with poor saves. When you consider that Company Command Squads are among the most obvious targets for a smart opponent when trying to break down an Astra Militarum gun-line, taking a pair is almost always better in any situation than taking one with Creed for a roughly equivalent points investment.

What further gives players legitimate reason to avoid Creed competitively is the potential to replicate his traits at a lower cost through a single Company Commander. Vox Casters are incredibly cheap and especially so when taken in blob squads that only need one, while the sixth Warlord Trait on the Astra Militarum table allows a stock Company Commander to effortlessly mimic Creed. About the only unique trait to Creed otherwise is wielding a pair of hot-shot laspistols that afford him the Gunslinger rule automatically, but with a tiny range and low Strength this is an almost laughable equipment choice on a Toughness 3 model that almost never wants to get close to enemy units.

The key to competitive Astra Militarum lists is a mixture of psychic powers and Orders; defending models or units that provide such abilities is paramount as they are the best force multipliers available to your forces. Protecting Primaris Psykers is easy enough when they can hide in all manner of units, but protecting the sources of Orders is an altogether different proposition as Yarrick aside they are all naturally part of a small squad with pathetic survivability. The key to keeping your Orders flowing is thus spreading them out across four or more units in standard sized games so that your opponents can't just single them out and destroy them all at once. Creed may as well be anathema to this strategy as his insane cost and inherent fragility not only waste valuable points that could be used to spread Orders around intelligently, but also make him the most obvious and easy target imaginable.

Maximising Creed's abilities means putting as much emphasis on Orders as you can - in the new codex this is pretty much Creed's signature ability, after all. This involves blob Infantry Squads, massive Conscript units - both blob types should have Ministorum Priest and Primaris Psyker support - Heavy Weapon Teams, Sabre Defence Platforms and the other various Artillery type units offered by Forge World such as the Basilisk Artillery Batteries and Thudd Guns. All of the above units not only are legal targets for Orders as none qualify as vehicles, but they are all among the most devastating units you can field in terms of raw firepower. Giving - for example - a trio of Basilisks flat Ignores Cover and Tank Hunters will make them among the scariest barrage units in the game, while abusing Go to Ground and then immediately issuing the "Get Back in the Fight" Order with a Stubborn Commissar ensures your blobs will be advancing with minimized casualties.

While such tactics obviously apply to a regular Company Command Squad, Creed really should be seen as a single boosted Company Commander - he saves points on Vox Casters and gives you two very useful Warlord Traits. Of course, protecting Creed is the other half of employing him seeing as any sane opponent will pick him out at the first opportunity, especially as only Creed counts as the Warlord now and not the entire squad as in 6th Edition. This means using Fortifications or Chimeras to your advantage with the latter preferably hiding in a ruin of some sort, though I prefer the former simply because it is far more secure against Barrage weapons. The Bastion is always a cheap and safe bet, but other more expensive options that can also field significant portions of your entire fighting force are also advisable. Despite having two hot-shot laspistols, Creed is so fragile and expensive that you never want him in a melee unnecessarily so ensure that his unit stays behind the front-line wherever possible.


Thanks guys for taking the time to read this article! What have your experiences been like with Cadia's prodigal son, and have you found him to be an effective tool in your efforts to combat the enemies of the Imperium? Cheers, and have a nice day!
at 7:06 pm