Listen up maggots! Lord Castellan Creed has assigned me to you ragged lot and by the Emperor you are the sorriest pack of Guardsmen I've seen this side of Terra! Get in line! I've been instructed to give you worthless dogs the honour of my presence in the upcoming battle, so don't mess it up by throwing your lives into that bloody grinder! If you want to survive under the tutelage of Sergeant Kell, you had best start listening to him! Are we clear? 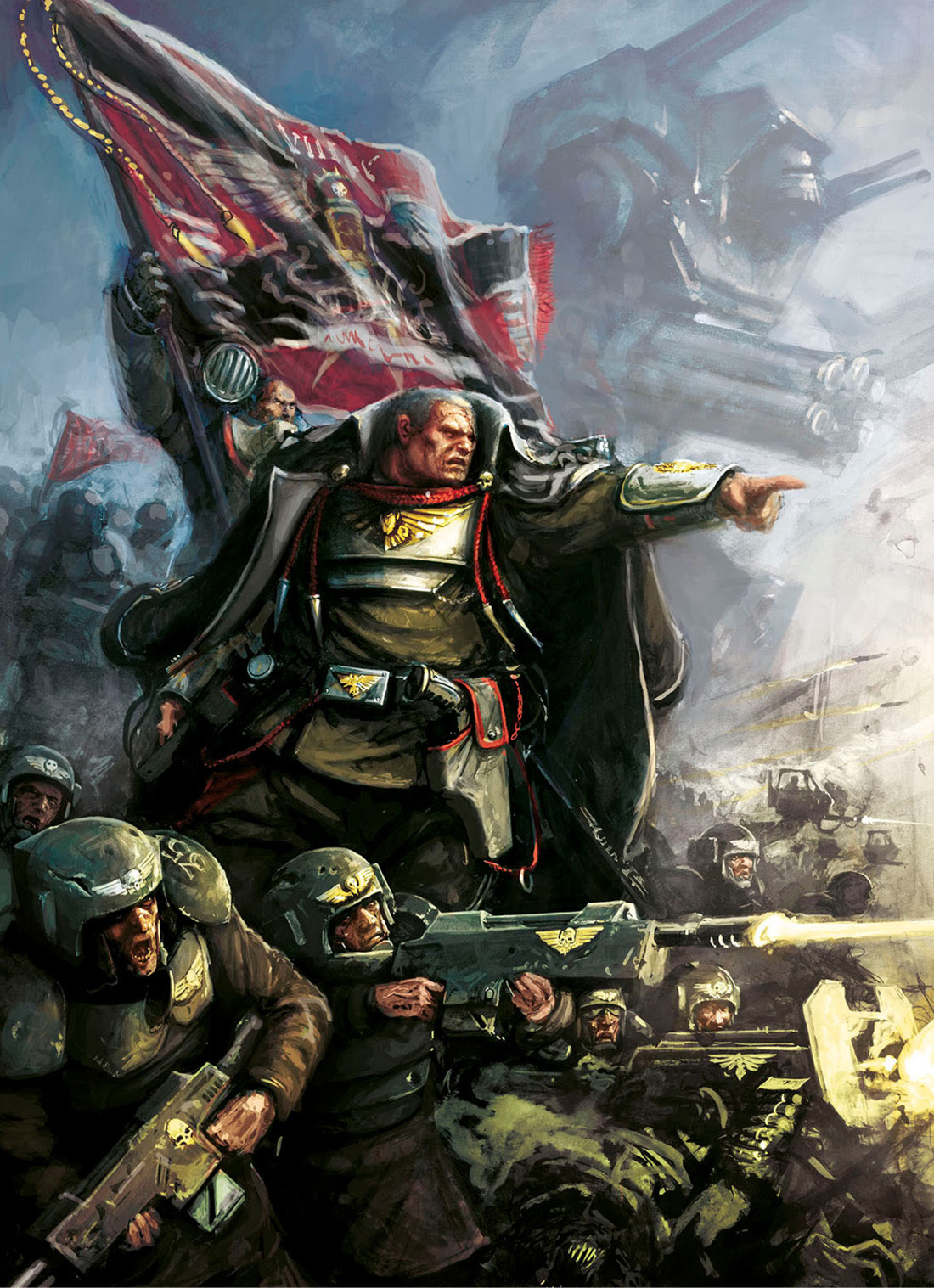 Even though bodyguards for Command Squads have effectively disappeared in the new codex, Kell still remains as the loyal herald and standard bearer of Lord Castellan Creed. Unfortunately - yet again - not only is Kell a shadow of his former self, he was and still is just not a worthwhile investment of points. In the previous codex, Kell could be purchased separately to Creed and allowed Orders to be taken on the Officers' Leadership in the Company Command Squad, whether it was Creed or a standard Company Commander. This actually provided a legitimate reason for Creed to have a higher Leadership value over a Company Commander, but now not only is Creed a requirement to take Kell but Orders can only use Kell's Leadership and not that of the reigning Officer. Taking Orders on Leadership 8 is certainly better than taking them on Leadership 7 but it is no way worth the mandatory one hundred and fifty-plus point investment - and that doesn't even include the mandatory Company Command Squad!

For now though, let us look at the positives for Colour Sergeant Kell. First off, he is essentially a Company Commander with one less wound, Attacks and Leadership. He lacks an invulnerable save but makes up for it with a stock 4+ armour save and Initiative 4. He is kitted for melee combat with both a power sword and a power fist, having three attacks base with the former and two base with the latter. Unfortunately, being Weapon Skill and Initiative 4 with only a few attacks considering his base Strength 3 means Kell really can't be considered a true combat character but is instead a nice deterrent against light assault elements that would otherwise mop up your Command Squads. Kell also saves you points by coming stock with an always useful Regimental Standard that is key to success with blob lists that either don't feature Ministorum Priests - Commissars for everyone! - or if you have lots of Veterans and other various smaller units. Kell thankfully retains his "Look Out - Argh!" rule and as such characters in the same unit as him automatically pass Look Out Sir rolls, though this does unfortunately mean Kell can get picked out very quickly if you don't want your characters to take wounds.

Sadly, that's where all the good stuff halts in its tracks. Kell is a Toughness 3, two wound model with only a 4+ armour save for defence that is more expensive by himself than an entire Company Command Squad despite being inferior to a Company Commander in terms of survivability. Sure, he's a better bodyguard than a standard Veteran, but what about all the unnecessary equipment he has? A Company Command Squad should never be in combat as even with characters like Kell or Nork Deddog, the important portions of the unit - the Officers like Creed or the Company Commander - will be slaughtered almost instantly. Toughness 3 models with weak stats and saving throws do not belong in close combat with such low numbers and high value. That Look Out - Argh! rule that Kell has? Every time Creed has a wound allocated to him and you obviously take a Look Out Sir, Kell has to take the wound(s) first before any other models, meaning that any random squad of Scouts with Sniper weapons will kill Kell in record time without ever actually targeting him. 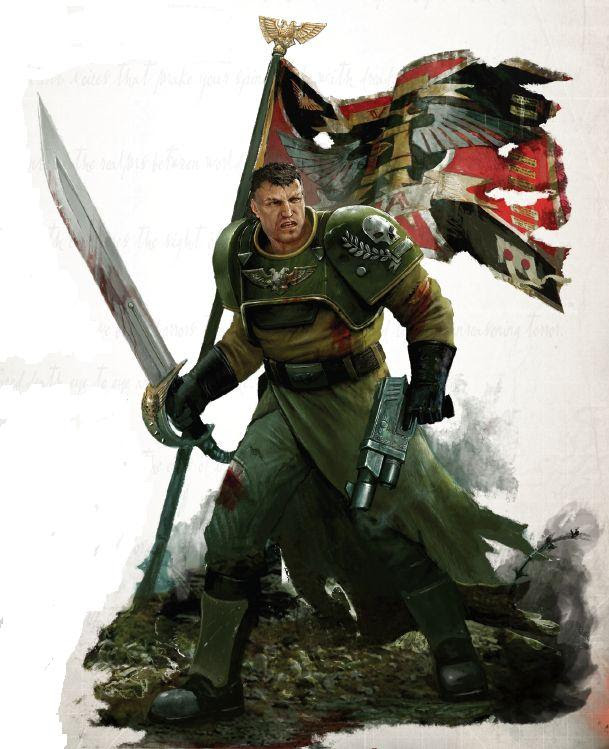 As cool as having both a power fist and a power sword on a Guardsman is, they are rendered superfluous as the Command Squad will rarely get into combat. Kell isn't even that great of a wielder for these weapons as Strength 3 AP3 melee attacks on Weapon Skill 4 are unimpressive, while Strength 6 AP2 attacks at Initiative 1 are hardly worth talking about. Perhaps Kell's cost could be justified if he really benefited Orders much like Creed does - who also isn't worth his points - but the fact that they changed his signature ability so that units only benefit from Leadership 8 and not Leadership 9 or 10 gives almost no reason for you to include him with Creed. Re-rolls on Leadership 7 aren't great but it is more advisable compared to spending almost another century's worth of points on the Command Squad. It is painful enough that Kell isn't a worthwhile option on his own, but making the expensive Creed mandatory to feature the Colour Sergeant sees that no competitive list should ever feature him. Did I mention that Kell also replaces a Veteran. Why!?

Seeing as Creed is a requirement to employ Kell and the Lord Castellan is suited to an infantry or artillery heavy force, it comes as no surprise that Kell belongs in the same kind of list as - after all - he is a bodyguard to Creed. Even with Kell providing some melee punch I still recommend keeping this incredibly expensive Command Squad hidden, preferably in a hidden Chimera where they are mostly safe from incoming fire. The unfortunate aspect of Kell's rules is that he must take wounds for his Company Commander and thus Barrage weapons are incredibly deadly against him even if he is nowhere near the centre of the blast. Just as Creed "saves" you points on Vox Casters, Kell "saves" points on Commissars if you plan on fielding more than three which is at least something to consider if you plan on employing him. Just as Creed needs to stay within 12" of friendly units to issue Orders, so too must Kell remain in close proximity to the rest of your forces. Ultimately, as Kell always follows Creed around and is darned expensive, the best way to use him is just to hide the Command Squad so he won't be forced into taking bullets for characters your opponents attempt to single out.

Did you hear that right, maggots!? If you aren't prepared yet, then the Emperor protect you in death - your corpse will shield the quick ones! If you want to keep your heads in the coming battle, you had best keep them down or the last thing you will see is my fist! If you muster up the brains to hear me over the din of battle, congratulations - you might survive more than a minute against those traitor scum. To formations!
at 9:01 pm