Greetings everyone and welcome to another edition in my Tactica Astra Militarum series! This day sees an introduction to Knight Commander Pask, a special character that has long been a staple in mechanized lists for the now re-christened Imperial Guard. The new codex has seen Pask elevated to a proper HQ choice that can even potentially be the army warlord, and his abilities have seen staggering improvements to compensate. Few special characters are as destructive or terrifying as Knight Commander Pask leading a squadron of Leman Russ tanks; I hope these tactics prove useful in your games with the legendary operator of the Hand of Steel. 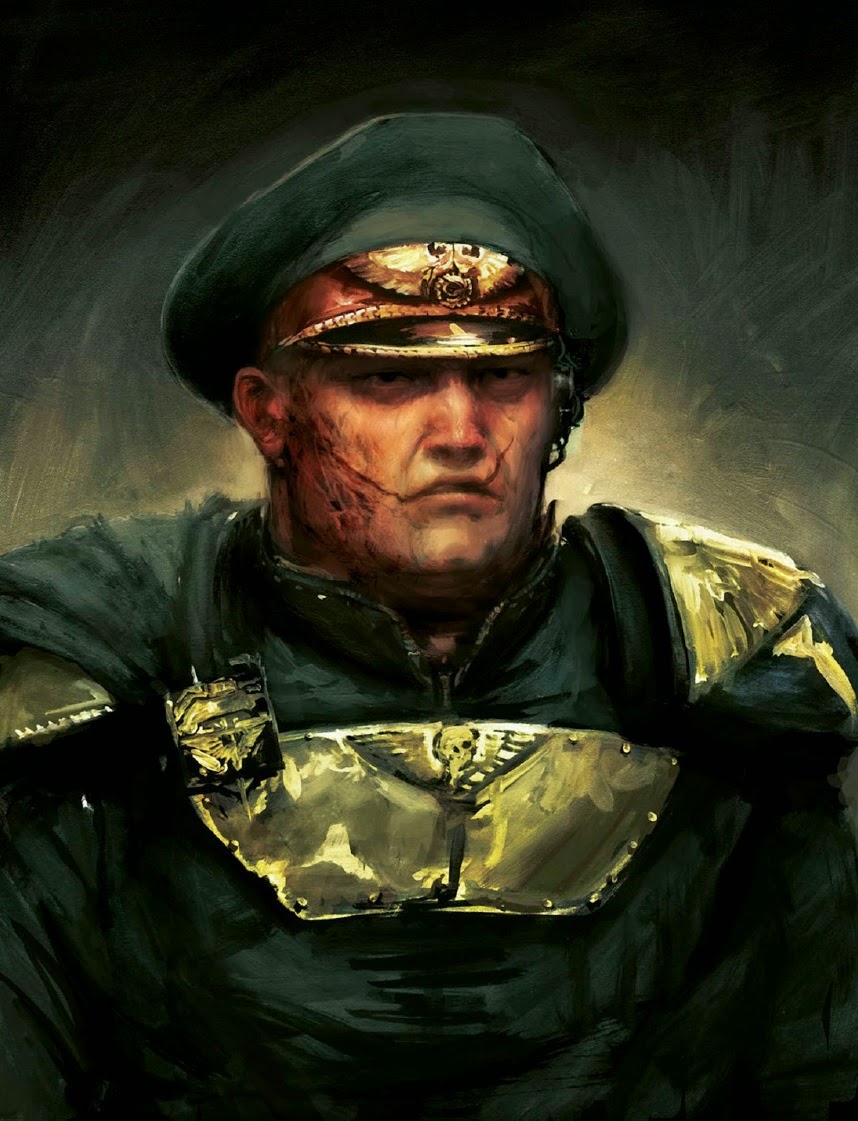 Seeing as I have already reviewed the standard Tank Commanders and Pask is effectively an upgrade to those, I will only touch on those core aspects briefly so as to focus on what makes the Knight Commander distinct and unique. The ability to make a Leman Russ tank the army Warlord is a far-cry from the Toughness 3 three wound character options the Astra Militarum usually have, and despite a reduced chart to choose from their available Warlord Traits are all generally useful. The Tank Orders are decent but nothing spectacular - especially when compared to the standard Orders usually reserved for Infantry and Artillery unit types - while being forced to pay for a mandatory squad-mate to the Tank Commander does jack the cost of the unit up considerably. As such, most of the positives and negatives of the Tank Commander hold true for Pask, though he exacerbates the cost issue quite a bit by being a pricey upgrade character that principally provides Ballistic Skill 4 to a single Leman Russ tank.

Despite all this, Pask easily competes with Commissar Yarrick for the title of best special character in the Astra Militarum codex through a combination of insane damage potential, support abilities and survivability. A Ballistic Skill 4 Leman Russ is generally a decent upgrade for most variants and a pivotal one for others like the Vanquisher and Punisher, but the addition of Crack Shot is what really sets Pask apart. The Knight Commander's Leman Russ can freely re-roll armour penetration attempts against enemy vehicles - including glances in an attempt to do penetrating hits - which is obviously a godsend for something like the Vanquisher that is solely focused on destroying tanks. Additionally, depending on which Leman Russ variant Pask inhabits that vehicle gains a powerful bonus effect ranging from re-rolls to hit with a Vanquisher Battle Cannon to applying the Rending special rule to each shot fired by a Punisher Gatling Cannon. These effects secure Pask's place as one of the most destructive special characters in any Warhammer 40,000 codex, but what really sets him apart is his preset Warlord Trait - Old Grudges.

Providing Preferred Enemy for re-rolls of 1s for all to hit and to wound rolls on something like a Punisher that puts out potentially twenty-nine shots is simply ludicrous, but the stipulation that it applies to all Leman Russ tanks in Pask's squadron makes him arguably the codex's best Warlord choice. Re-rolling 1s to wound for something like a Leman Russ Demolisher maximises their damage output against pretty much anything outside of Gargantuan Creatures or psykers with Iron Arm, while a Vanquisher will be able to re-roll one third of its misses when firing at full Ballistic Skill. Of course, no tank benefits nearly as much from this buff as the Executioner and this is why Pask should always be worth considering. Executioners' annihilate infantry of all kinds like no other unit in the codex and arguably in the game for the points, but that damage potential comes with great risk with up to five Gets Hot rolls per friendly shooting phase. One outfitted with plasma cannons has a startlingly high chance of destroying itself through hull point damage assuming it fires every turn in an "average" six turn game which obviously reduces the value of the tank considerably. Enter Knight Commander Pask (and Tank Commanders if luck provides) who provides Preferred Enemy to re-roll those failed Gets Hot rolls and see that an Executioner should only ever lose a single hull point to over-heating once every three or so turns on average, and you have yourself a match made in the Emperor's eyes.

Knight Commander Pask is fantastic based on how destructive he alone is, but the effect he has on friendly Executioners in the same squadron are possibly his most noteworthy ability seeing how incredibly points-efficient those particular tanks are. Seeing as Leman Russ Executioners would easily be the best Leman Russ around if they could ignore Gets Hot all the time, it isn't hard to see just how incredible Pask is even if you don't consider how good Preferred Enemy is for his own tank. Throw in the Crack Shot rule and the fact that Pask is a durable AV 14/13/10(11) three hull point Warlord and I see few reasons for competitive mechanized lists to not include the venerable Knight Commander. There is one downside to Pask and that is the excessive cost of making the most of his abilities, with arguably the most damaging combo being himself in a Punisher with a pair of Executioners kitted for maximum plasma devastation. This Leman Russ squadron is all but guaranteed to annihilate anything it touches, but with a colossal 600 point investment with all the necessary upgrades you would expect such a performance in every game turn. Investing so much into a single unit that is so easily countered by a dedicated or at least speedy melee unit or really any squad packing either Krak or Haywire grenades could prove disastrous, particularly against an army with multiple hard counters for vehicles such as Necrons. As such I do recommend reserving that particular Pask build for the larger games, but as expensive as Pask is regardless I do feel he is definitely worth your time seeing as what he provides over a regular Tank Commander is easily worth the extra investment.

I feel that this question is best answered by categorizing it into different points brackets. In lower point games of 750 to 1500, I recommend Pask be used alongside a single Eradicator to save points and maximise its damage output against light infantry. If Pask is leading a Vanquisher then the pseudo Split Fire Tank Order will be necessary to ensure both tanks are firing at their preferred targets. As for which tank is best for Pask at that level, I think that buys into which tank he is best in generally - the Punisher and Vanquisher, in that order. These two tanks make the most of Pask's abilities when considering both Crack Shot and Preferred Enemy, while points allowing any tank is at home in his squadron but particularly Executioners above all others. It is in larger games that you must really start to consider taking Pask with either one or two Executioners as squad-mates because with Preferred Enemy and potential Prescience from either an in-codex or Allied psyker they become easily the most deadly units in the Astra Militarum codex.

Once you start hitting that 1850 and higher points bracket is when that unit really starts to become so alluring as it is essentially the Astra Militarum "death-star" equivalent, though it does have its obvious weaknesses - fast melee units that can harm rear AV 10-11, units with the Invisibility blessing and so on - that really need to be considered. Personally, I prefer this unit in a mechanized list with lots of other targets such as cheap Leman Russ Eradicators and Chimera-mounted Veterans that flood the field and prevent it from being too easy of a target to reach, but it does hold its own in almost any list. I feel the best use of Pask without investing too heavily on the points is a mixture of either Vanquisher or Punisher - your preference - with a single Executioner. This unit is still devastating and is a prime target for your psychic blessings, but it isn't too big of a points sink in the sense that your army would collapse if they were destroyed.

As for which tank fits for Pask, I tend to think he is best suited to the Vanquisher and Punisher for the sheer damage output they provide. The Vanquisher with re-rolls both to hit and for armour penetration rolls is guaranteed to put the hurt on any tank whether it is a Rhino or a Land Raider, while the Pask Punisher is infamous for its ludicrous devastation capabilities against anything that isn't an AV14 vehicle. It averages almost three wounds a turn on a Wraithknight and is incredibly likely to kill a T6 W5 3+ armoured monstrous creature in a single shooting phase, while it can reliably destroy an AV13 vehicle with a bit of luck in Rending. Debates often rage as to which tank is "perfect" for Pask and both have their advantages, the Vanquisher with its range keeping it safe and the Punisher with its sheer weight of firepower. I feel that particularly in 7th Edition the Punisher does pull ahead as the best tank with Flying Monstrous Creatures now unable to charge when switching fly modes in addition to the less punishing vehicle damage chart. The short range is only really a massive issue against Necrons and mobile melta units like Raptors or Dominions, with deep striking melta units caring little either way. The other variants generally aren't that great for Pask as the boosts he provides versus the cost of each individual tank just aren't as comparable to the Vanquisher and Punisher.

Thank you all for reading this installment in the Tactica Astra Militarum series! I hope you find this useful in your efforts to master the incredible potential of Knight Commander Pask, and I am eager to hear how the famed Leman Russ squadron leader has performed in your games. Thanks again and have a nice day!
at 7:54 pm