Hey guys JT here with another article in our Space Marines series of articles focusing on the creation of a Home Brew Chapter or how to use a Canon Chapter in an effective way; you can find the previous articles in the series here and here; which are also indexed in the Hobby Portal. Today I will be talking about the creation process involved, as well as providing a template for you guys to take away and distribute/keep however you see fit.

Click the 'read more' link below to view the article.

So you've decided on a kick ass colour scheme for your newly born Space Marine Chapter and yet, you're not quite sure where to go from there - or you are, and your thoughts really aren't that ordered at this point. This happens to a lot of us, some people will stop with their development at the colour scheme part and get to building their army, which is fine. For the rest of us, there are some very important things to consider - such as a theme for the army, which Codex you're using to best fit your theme, whether your Chapter is loyalist or renegade, and most importantly - a name for your Chapter!

I tend to start with choosing a theme - this will help when writing up lists and choosing a Codex, and really should be help get the creative juices flowing. When I say theme I mean mostly concerning Tactical Doctrine - aesthetics will come later - and what kind of army you want to be playing. The vanilla Marine 'dex has a good selection of special characters that can change your army composition or adjust your tactics quite well within reasonable bounds - if you're playing a stealthy army, a counts - as Kayvaan Shrike might be a good avenue to take if you also happen to like Assault Marines and want him jumping around like a lunatic; this is just an example. It is important to look at each character in the book as an avatar for a play style, and ignore the names/chapter associations as you can reasonably do a counts-as version to represent your own commander.

After some reading you may find that the Vanilla Codex just is not cutting it, you may not necessarily want tac marines as troops in your army or you're after some cavalry or something to that effect, at this point it might be a good idea to start considering other Codex's and getting a feel for whether they could better suit the theme you have in mind. You may, for example - want a whole army of berserker's rampaging through the place, or an army consisting entirely of terminators; things that are impossible in the Vanilla 'dex, to help you guys; here is a quick summary of what each Codex's differences in a very basic sense:


Please remember the above is by no means a comprehensive analysis when you're considering a Codex, you can find a lot of information on each out there on the net - and you can always ask at your local FLGS or GW, or any internet forum for some more advice.

So hopefully you now have a theme, a colour scheme and a chosen Codex - its finally ready to start writing that all important army list. When you write your army list, feel free to stray from your theme as you can always adapt it to include the units you like - which is the beautiful part of making your own Chapter. You can't have anyone whinging that you have Land Speeders when you're playing Salamanders, for example. When writing list, there are some general strategies to consider first -

You can now call it done with your army, apart from creating a name of course, and no one will really notice the difference. Alternatively, you can go through and develop an intriguing back story for your army - with a lot of cool little details to really help you bond with your new Chapter of marines. I'm going to assume you want to do the latter; in which case I'm going to provide a helpful template for you guys to copy and paste, print, modify or whatever and fill out.

Fleet based or Fortress Monastery:

As an example, I've filled out the template for the last home brew chapter I made; the Sons of Saul: 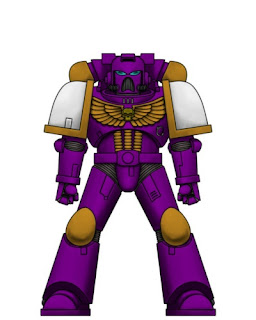 Name of Chapter: Sons of Saul

Chapter Symbol: As Emperors Children with sword through it.

Renegade or Loyal: Loyal, but declared Excommunicate Traitoris as they refuse to submit gene seed tithes and do not fight along side other Imperial forces.

Homeworld (if any): None

Associated Primarch (if known): Fulgrim (suspected by members of the Inquisition)

Specialist Formations: The Unforgiven and The Repentia

Unique Rituals: Go through unusual amounts of praying to the Emperor, have a high amount of Chaplains who watch over their brothers for any signs of corruption. They also, every Terran year - reconsecrate their original vows to hunt down the arch - traitor Fulgrim and bring him to justice along with all his fell children. They do not leave markings for their graves, as they believe they as cursed spawn of an arch - traitor, deserve no glory.

Rival Chapters: Have had numerous clashes with the Minotaurs chapter and other chapters stationed near the Eye of Terror, particularly during the 13th Black Crusade when they were wrongfully suspected of aiding Abaddon's forces.

Chapter Relics: The Shattered Sword; rumoured to be the fragments from Saul Tarvitz's own Broadsword, it has been reforged and is permitted only to be carried by the Master of the Repentia, a master swordsman who will only use the blade on the servants of Fulgrim; or pray - Fulgrim himself.

Recruitment Process: Takes recruits from feral worlds around the Eye of Terror after screening them for corruption; recruitment is high compared to a Loyalist chapter yet due to huge amounts of casualties, the Chapter is kept around 1000 active battle brothers at any given time.

Perception of Humanity (contempt, veneration etc): They venerate the mortal man, and believe that it is the people of the Imperium and the Emperor himself they owe their greatest debt to; through the actions of their gene father the golden age of the nascent Imperium was torn asunder and corrupted to its current, stagnant form.

Notable Engagements: Numerous engagements against the Emperors Children. Have killed Lucius the Eternal several times, the Master of Repentia always performing the deed and always inevitably turning into Lucius. The Master of Repentia will name his successor prior to his death and will be left on world as the rest of the Chapter make their withdrawal, to kill Lucius and his brothers another day.

Chapter History/story/miscellaneous: Formed from Emperor's Children gene seed stock hidden in the vaults of Mars, the Sons of Saul believe in the nobility of Saul Tarvitz and claim to be descended from him directly. They believe they can never be forgiven for the sins of their forbears, which has driven them to hunt down all their brothers in the Emperors Children. Due to their shame, they have wilfully isolated themselves from the rest of Imperium to conduct their hunt in private - it is not known how the Chapter came to possess such powerful artefacts and ships, but they are regarded as a massive threat by the Inquisition; who interpret their isolationism and corrupt gene seed as evidence enough of their need to be destroyed to the last.