Hello there everyone, Learn2Eel here with another entry in the Tactica: Astra Militarum series! Today I'll be taking a look at the biggest and meanest Ogryn of them all, Nork Deddog, and analyzing just why he is the best bodyguard option a Company Commander could have in the new codex. I hope you enjoy this article! 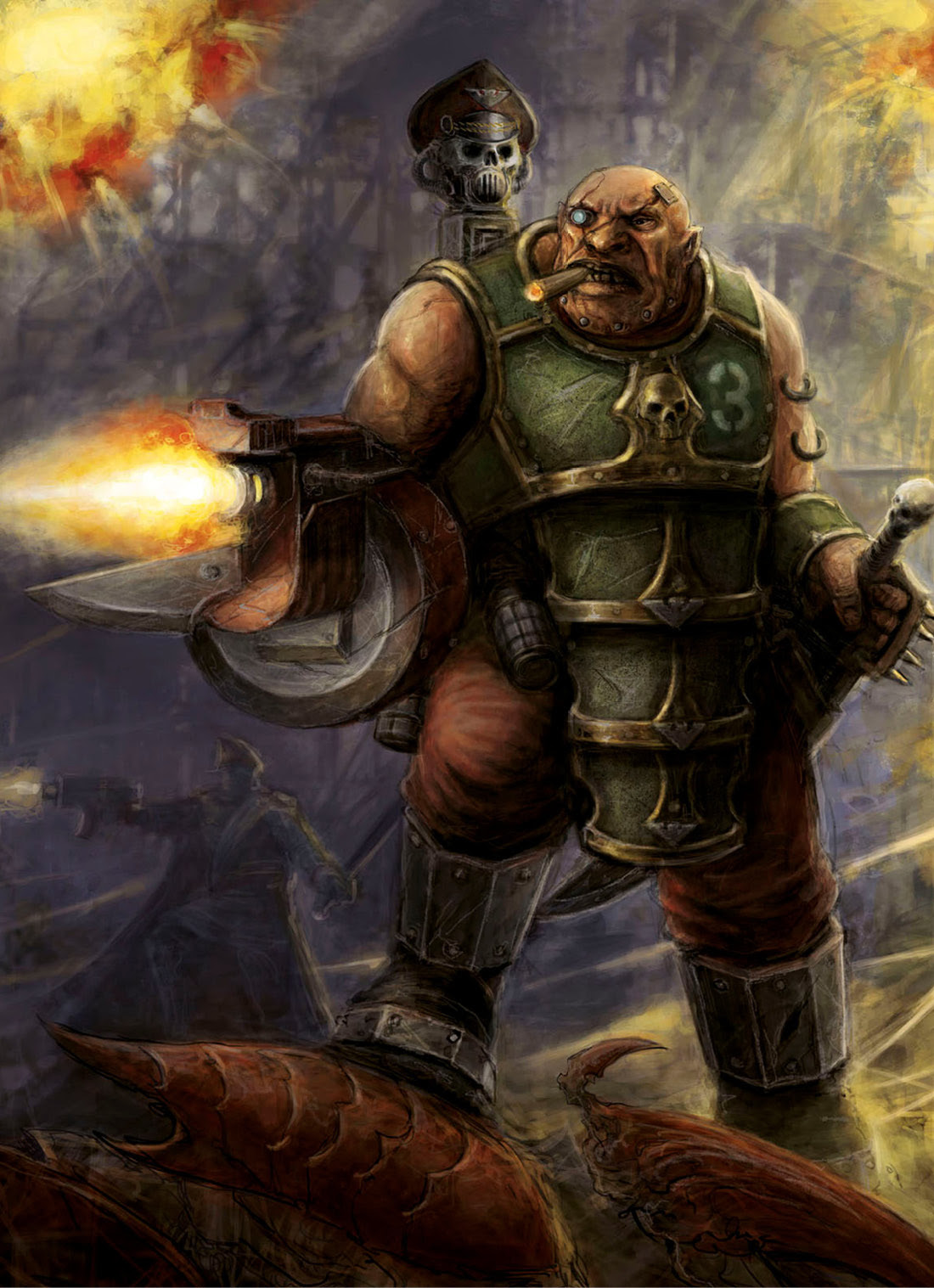 After reviewing Colour Sergeant Kell who shares a similar purpose to Nork, it would be understandable to think I would also be down on the hulking Ogryn bodyguard. Thankfully this is most definitely not the case as not only is Nork a far superior option to Kell when taken on each individual's own merits, but Nork can actually be described as a justifiable purchase. Though I still don't really believe in adding melee centric options or models to a Company Command Squad as risking the Commander like that is usually silly, if any choice pushes that delightful red button then it is "The Ultimate Bodyguard".

Nork is an Ogryn and shares a mostly identical profile to a Bone 'ead with the only stat difference being that he has an extra point in both Initiative and Leadership. He shares the Hammer of Wrath and Stubborn rules - and thus eliminates any real need for a Lord Commissar in a Company Command Squad - while he even carries around a Ripper Gun, Frag Grenades and an improved 4+ armour save. Nork distinguishes himself from the rest of his sizable brethren by having the Feel No Pain and Look Out - Arghh special rules; the former makes him incredibly survivable, while the latter automatically passes on wounds allocated from other characters to Nork. Where Kell suffers from being far too fragile as an expensive bodyguard option, Nork actually succeeds in this role with his whopping three Toughness 5 wounds, 4+ armour save and 5+ Feel No Pain. Nork is arguably the most durable infantry model in the Astra Militarum outside of possibly Commissar Yarrick and thus makes for the perfect bodyguard. Just be aware that due to Majority Toughness rules Nork will usually only get to make use of his Toughness 5 in melee!

Again like Kell, Nork also automatically passes Glorious Intervention tests and must perform them whenever possible. What further distinguishes him from the Colour Sergeant is that Nork can never be the target of Summary Execution and thus has no fear of being in the same unit as a Lord Commissar. If that wasn't enough, Nork can exchange his four base Strength 5 attacks at Weapon Skill 4 and Initiative 3 for a single Strength 8 AP3 attack with the Concussive special rule, perfect for inflicting Instant Death on Toughness 4 and Toughness 3 multiple wound models. Space Marine Captains lacking Storm Shields, Chaos Lords without a Daemonic Mount or the Mark of Nurgle, Eldar Autarchs, Daemonic Heralds not of the Nurgle variety - all are fodder for the Thunderous Headbutt! This also allows Nork to really threaten vehicles and even already weakened monstrous creatures in combat and presents the Company Command Squad as a difficult rather than easy and obvious target for assaults.

If Kell didn't compare badly enough to Nork already - especially seeing as the two are near identical in cost if you don't include the Colour Sergeant's mandatory inclusion of Lord Castellan Creed - then the Heroic Sacrifice special rule the latter possesses just blows the poor Colour Sergeant out of the park. Once Nork loses his last wound he can make his full complement of attacks at the Initiative step in which he was slain - and yes, these can be swapped out for a Thunderous Headbutt as well - as a final retribution against his would-be killer(s). This allows Nork to remain a threat even against high Initiative characters such as Chaos Lords, while low Initiative foes would have to endure potentially eight Strength 5 AP- attacks or two Strength 8 AP3 attacks. These attacks are distinguished from his regular strikes by being forced to re-roll failed to hit and to wound rolls with them; it is almost as if making two rounds of attacks wasn't good enough already!

While I do maintain that a Company Command Squad should never willingly get into close combat unless there is some opportunity to destroy a valuable target - like a tough vehicle with weak rear armour - Nork (and Straken) certainly stamp themselves as potentially worthy of over-turning this mantra. The unfortunate reality is that gunline builds will simply shoot such units off the board and never worry about actually engaging them in close combat, while melee based armies will inevitably have to work through a plethora of fodder infantry and tanks. In that sense, though Nork is worth his points he will probably rate as an unnecessary purchase seeing as you likely would be making a big mistake for the Command Squad to be in combat, or your opponent got exceedingly lucky and their assault units somehow reached your valuable units unmolested.

I can't stress enough that Nork is by far the best option as a "bodyguard" and should be taken over Kell in almost any situation - even if you take Creed! - but unless you really feel insecure about assault units getting behind your lines and attacking your Command Squad, I can't recommend Nork as I have found his services really aren't required in most games. If Flying Monstrous Creatures and Vanguard Veterans (excluding Blood Angels) could still charge when switching flying modes or arriving from Deep Strike then I think Nork would definitely have a place, but those changes in 7th (and 6th) Edition see Nork's value understandably reduced. This is because the sheer weight of firepower an Astra Militarum list can put out at any range - and particularly up close - should devastate those kinds of units anyway, though obviously ranged suicide squads like Sternguard in Drop Pods care little for this.

He is much like Straken in that regard where you must ask yourself whether you really need a melee-oriented character in a Company Command Squad - though Straken obviously brings army buffs to the table as well. If you actually find yourself needing that melee punch to protect your Company Commander, you can't do any better than Nork Deddog! Alternatively, if you don't have transports or buildings available for a Company Command Squad or are afraid of Barrage sniping, Nork also proves his worth here again because of the Look Out - Arghh rule. I still think most lists would be better off spending the points on another Company Command Squad rather than investing heavily in just one, but I definitely see the merits of Nork's inclusion.

If you are planning on including Nork Deddog then much like Straken I would still recommend keeping your Command Squad in the backfield with lots of protection from your other units. Though Nork only really confers Stubborn to the unit outside of his worthwhile melee damage capabilities and thus using him as a mere bodyguard might seem a waste, the reality is that you purchase Nork to protect a Company Commander first and foremost. Two Orders per turn with the Senior Officer special rule is why you take a Company Command Squad, not because they give you some nasty and expensive character additions or Ballistic Skill 4 ranged attacks.

Even with the Death Mask of Ollanius I still cannot recommend pushing a Company Commander into combat as they are just far too fragile - and that doesn't even begin to cover all the Strength 6 Ignores Cover shooting populating the meta right now. Keep them hidden, keep them safe - Nork will ensure that close ranged units can't pick out the Company Commander whether through Precision Shots or assaults. Getting into combat with Nork should be considered a bonus and not a requirement seeing as his Look Out - Arghh special rule and high durability ensure your Commander will remain unharmed for several turns except against heavy firepower. 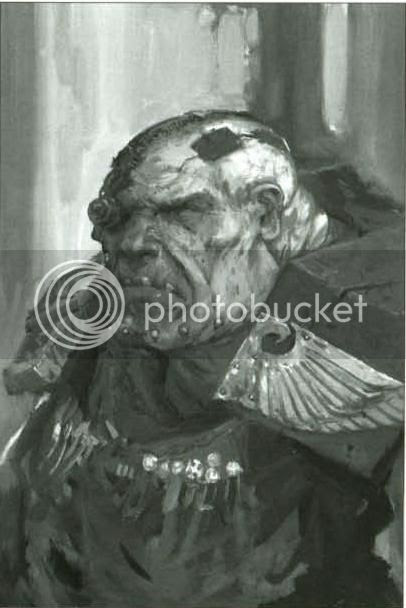 Thank you for taking the time to read this article! I hope that you found this Tactica useful and I am eager to hear how Nork Deddog has performed in your games. How have your experiences with the Astra Militarum's greatest bodyguard been so far? Thanks again, and have a nice day! Eel out.
at 6:34 pm