Hello there my family, friends and fans and welcome to the last look at the Infantry Platoons with my review of Conscripts. This is a unit that serves a similar role to a Combined Squad composed of anywhere between two and five Infantry Squads, providing a cost-effective horde unit at the lowest cost imaginable given their abilities. That this unit is completely restricted in options offsets its incredible points efficiency per model compared to contemporaries like Gretchin or Cultists, providing the Astra Militarum player with the potential for two massive horde units in the one Troops slot. Chuck in a Ministorum Priest or Commissar to ensure they never run and Conscripts will make for one of the cheapest yet surprisingly tough Objective Secured scoring units around. 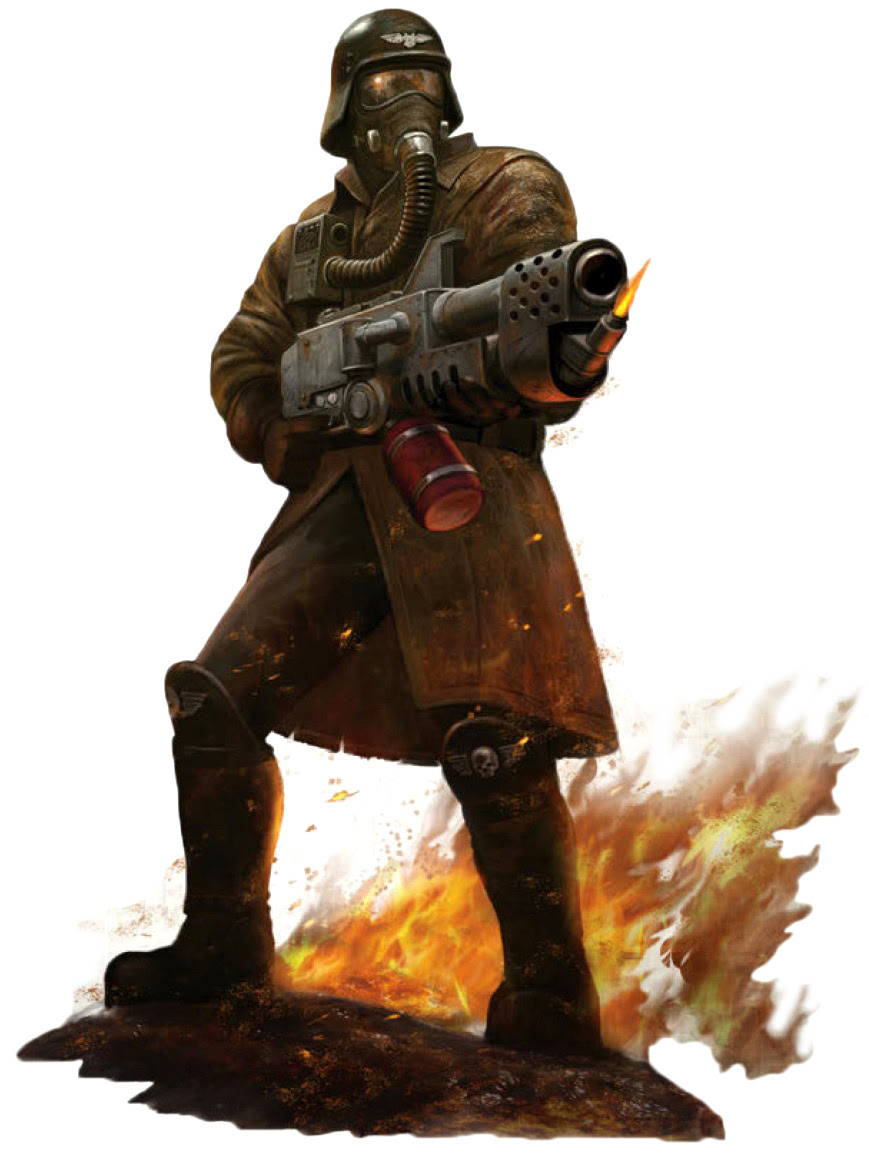 Overview
If Morpheus told you that Conscripts were just weaker and cheaper Guardsmen with no options, would you believe him and still take the red pill? All these and other life-changing questions can be answered by a simple maths equation; Conscripts are less than Guardsmen in every way, properly presented as C < G. On a serious note though, this defines Conscripts in a nutshell - they lose a point in Weapon Skill and Ballistic Skill, two points in Leadership and two points on their cost per model as well as any options whatsoever save to add extra models but are otherwise identical in every way to standard Infantry Squads. The option to take both a Combined Squad composed of up to five Infantry Squads and one giant unit of Conscripts per Infantry Platoon - both units numbering fifty models each - allows Astra Militarum players to field significantly more models than any other Games Workshop codex per Combined Arms detachment. This not only fits the theme of the Imperium being the largest faction in the galaxy but also gives Astra Militarum players access to some of the cheapest and most efficient horde units in the game.

The differences between Combined Squads and Conscripts serve to highlight the usefulness of static and mobile tactics for each unit and which respective squad is best suited to either role. That Conscripts cannot take special or heavy weapons gives Combined Squads a good reason to remain static on a backfield objective as they can provide intense firepower anywhere in the 48" or lower area, while the more inexpensive Conscripts are better suited to a combat role provided supporting characters are in attendance. You aren't wasting the potential of any heavy or special weapons by charging with Conscripts and Weapon Skill 2 as opposed to Weapon Skill 3 only really makes a difference against Weapon Skill 5 foes that are relatively rare outside of characters for most armies. The silly facts are that Conscripts have the exact same basic equipment as Guardsmen including the 5+ armour save, lasguns and even frag grenades - yes, Conscripts have frag grenades but both Tyranids and Chaos Daemons (mostly) can't buy them even if they wanted to. The standard human profile with the differences mentioned above is perfectly fine on a standard Guardsmen and the cost decrease compensates for those changes with Conscripts, making them possibly the cheapest and probably the most cost-effective horde unit in the game. Ork and Tyranid players need only compare Gretchin, Termagants and Hormagaunts to Conscripts and weep at how the Imperium just seems to do almost everything better and cheaper (this is vaguely sarcastic, mind).

This unit is only really good as a constantly advancing unit designed as a crazily cheap roadblock that can literally bury more than one objective in Toughness 3, 5+ armoured bodies. Heck, that is all that really needs to be said here - a 5+ armour save on a Toughness 3 model is all you need for a cheap horde unit and Conscripts could be seen as under-paying for this privilege, certainly in the Eternal War missions where their lack of mobility isn't as much of a weakness. About the only complaint I could make about this unit is that it can't take any kind of wargear options, but the sheer size, low cost and same capability to add support characters means any real complaints should be ignored. Chuck a Commissar or Ministorum Priest (or both) in this unit to ensure it never runs away, providing a massive moving wall of cover to your more important squads behind that neither you nor they will care about if the models die in their droves.

Best Uses
Take a minimum thirty of these, but preferably fifty, and at the very least throw a Commissar or Ministorum Priest into the unit. Either of the two fits just fine but the Commissar may be preferable to some for the boosted Leadership in regards to Orders, where straight Fearless and the War Hymms are probably more useful for a close quarters-centric horde unit. Use this unit as your "advancing" giant squad that captures objectives in the midfield and dares opponents to try and dislodge them, their sheer numbers requiring dedicated attention but low cost making their loss almost insignificant to your overall chances of victory. The unit puts out a ridiculous amount of shots between their own shooting phase and Overwatch, while the number of attacks - even at Strength 3 and Initiative 3 - are not to be underestimated with War Hymms and psychic blessings possibly in play. As large as this unit is you should treat it as a throw-away unit because of how cheap and numerous it is, able to sustain casualties better than any other unit in your army and keep chugging on.

You want them for their Objective Secured scoring and ability to soak up damage that your other units - like Heavy Weapons Teams - can't in addition to tying down valuable enemy units in combat for an eternity. One of the most common tricks to use with Conscripts in conjunction with valuable short ranged units such as Leman Russ Demolishers or Chimeras loaded with Veterans is to spread out and advance, covering a wide amount of space and spreading the models thin to make them less vulnerable to blast weapons. Move and run them forward each turn with those units advancing behind them, using the Conscripts as a gigantic wall of flesh providing 5+ cover saves to anything they obscure. Combine this tactic with Bullgryns armed with slab shields if you want to go all-in on a Straken themed build that wants to get into melee and just outnumber and overwhelm the opponent. Make sure that your Commissar or Ministorum Priest - or any other attached characters - are safely tucked in around a well spread out core of models, towards the back and central to keep them safe from threats to the front as well as deep striking opponents. If you face a gunline that is hugging its board edge then using the Conscripts as the moving wall that advances from cover to cover will work just fine, while spreading them out to sit on multiple objectives can be a hilarious way to force your opponent to focus on the inexpensive horde unit.


And that marks the end of my review of Infantry Platoons with one of the most oddly useful units in the Troops slot, their role as fodder fitting perfectly into standard Astra Militarum doctrines. Though this unit is unlikely to ever do any serious damage outside of massed buffs from supporting characters like Ministorum Priests and Primaris Psykers, the sheer number of bodies and insanely low cost per model make them worthwhile as a meaty objective capturing unit alone. I hope this article has helped you to better understand these "bargain Guardsmen" and aided you in using Infantry Platoons overall, and I wish you all a lovely day!
at 5:31 pm