Greetings fellow war-gamers and welcome to another addition to my long-running Astra Militarum Tactica series! Today marks the beginning of my review of Infantry Platoons where I will be analyzing each individual unit in their own separate article, starting with the Platoon Command Squad. As one of the three mandatory squads in an Infantry Platoon, the Command Squad is a native supporting element that acts as a cheaper five-strong equivalent to a Primaris Psyker in terms of providing essential efficiency boosts to your main damage dealing core units. Infantry Squads are good value by themselves but become so much more with the help of a Command Squad, a unit that definitely helps to justify taking Infantry Platoons over Veterans.

This is the first of five separate Infantry Platoon articles. 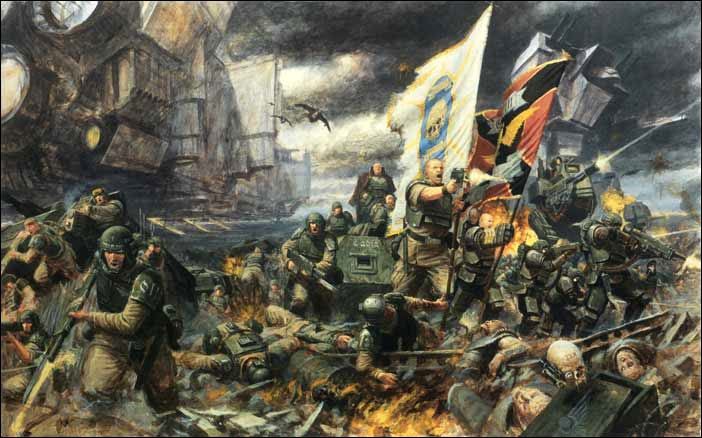 Overview
While many might see a Platoon Command Squad as just one of the three mandatory units in an Infantry Platoon, the reality is that they are a cheap and efficient support unit that provides amazing buffs for other squads in the form of Orders. This is effectively a slightly cheaper version of the Company Command Squad but with a few key differences, notably that the Commander has only a single wound and the Veterans are exchanged for regular Guardsmen. Generally speaking though these changes are more superfluous than anything else given that a Command Squad getting shot at will probably disappear in shot order anyway, while the firepower it offers even with upgrades will never match what Veterans or Tempestus Scions can put out.

What really matters is how the unit correlates to Orders and this is where the major difference lies; the Platoon Commander is bereft of the Senior Officer special rule and thus is barred from issuing the three best Orders available, and can only issue one per friendly shooting phase. Being unable to provide Ignores Cover or Tank/Monster Hunter to a unit does limit the Platoon Command Squad quite a bit but honestly the sheer damage boost doled out by "First Rank Fire, Second Rank Fire" or giving an entire unit Precision Shots are still great abilities to have. Allowing a unit of fifty Guardsmen to fire three shots per model from their lasguns and backed by Prescience from a cheap Primaris Psyker gives Astra Militarum by far the highest rate of fire of any army matched against the points investment, even if it is all only Strength 3 AP-. This is a unit comprised of five Toughness 3 models with a single wound each, possessing pitiful saves and poor equipment; Orders are what defines this unit and for that purpose Platoon Command Squads work just fine.


How to Equip Them
I often don't bother upgrading my Platoon Command Squads at all as there are no real must-take options available like the Master of Ordnance or Regimental Standard for a Company Command Squad. The Platoon Standard should be skipped as a Command Squad should really never be in combat while a medi-pack isn't as useful here as it would be for the HQ equivalent given the much lower cost and value. Worthwhile options include vox casters and krak grenades, the former for ensuring your Orders are heard and the latter as a "throw-away" upgrade if you have the points - remember, even five krak grenades can easily destroy a rear AV10 vehicle with three hull points in combat. I would keep the lasguns on the Guardsmen just for a few extra shots at long range seeing as a Command Squad generally doesn't want to be taking fire anyway, though if you take a Heavy Weapons Team then this probably won't matter anyway. 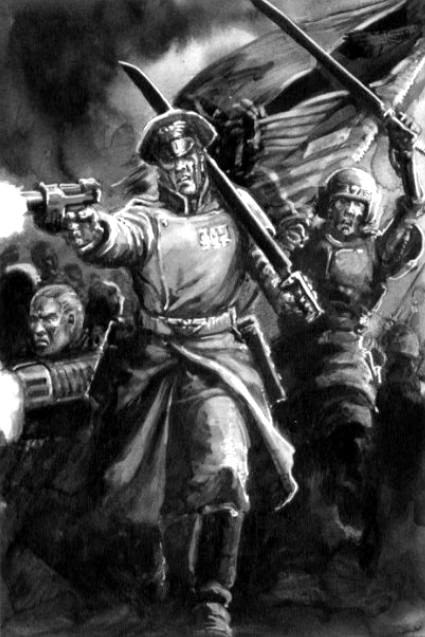 On that subject, I prefer autocannons over lascannons for Platoon Command Squads due to their Ballistic Skill 3 Guardsmen crew - mortars and heavy bolters are still better left alone for Wyverns and Leman Russes to pack the same or better weapons on a more protected platform. If you want to use this unit as a Special Weapon Squad without having to pay for that unit - the Command Squad is mandatory after all - then you will be happy to know the costs are identical for both the base unit and weapon options. This is fun for delivering four flamers or three and one heavy flamer out of a Valkyrie or Vendetta as a super mobile Objective Secured Troops choice that can easily clear light to medium infantry out of a fortified position. Aside from packing special weapons in a transport or throwing in a heavy weapons team though I find little use for the upgrades on a Platoon Command Squad as they are there to provide Orders rather than any real firepower.


Best Uses
The general idea with a Command Squad is to keep them out of sight of most of your opponents' shooting so that they can safely issue Orders to your more important squads like Heavy Weapons Teams or Veterans. Still, any firepower an opponent directs at a squad with a points cost lower than fifty points works in your favour assuming the squad is camped in cover - Orders are great but not exactly essential and if it means your Heavy Weapon Squads survive a turn longer then all the better! Still, it goes without saying that keeping the support unit alive is the best outcome so that your fodder infantry can eat bullets and shoot back in good measure. Hiding behind stationary Leman Russ variants like Battle Tanks and within 12" of at least one good target for Orders - particularly a Combined Infantry Squad - works just fine given the durable AV14/13/10(11) chassis and decently wide berth, though using cover or even intervening squads is also effective. If they do have a heavy weapons team then there's no reason not to use the awesome 48" range of the gun from the back of the field and surrounded by friendly infantry units, peppering light vehicles or monstrous creatures with minimal Strength 7 AP4 shooting.


Thank you everyone for taking the time to read my long-winded expose on Platoon Command Squads! They are certainly one of the less impressive units around in terms of tangible damage output or survivability but their low cost and natural synergy with the other elements of an Infantry Platoon ensure they will be among the most consistent performers for an Astra Militarum general. With that said, I hope you found this article useful to your endeavors as a player for or against the rechristened Imperial Guard and please have yourselves a lovely day!