Hello there family, friends and fans of Imperator Guides and welcome to our latest addition to the long-running Astra Militarum Tactica series! Psychic squads and characters are amongst the most heavily affected units with the new 7th Edition behind perhaps only Chariots for the sheer breadth of changes wrought, and Wyrdvane Psykers have become a far more important unit as a result. Being able to generate warp charge points is a necessity for any psyker to cast powers - especially against armies with potent psychic defences such as Grey Knights or Chaos Daemons - and Wyrdvane Psykers may have a place if only as a battery to power your Primaris Psykers. I hope you enjoy this article! 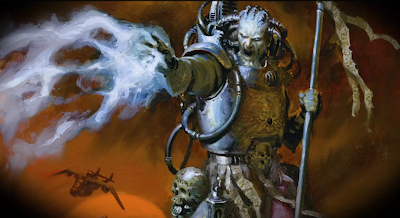 Overview
As one of two in-codex psyker options for the Astra Militarum, Wyrdvane Psykers take up a relatively free Elites slot whereas their main competitor the Primaris Psyker can be fielded in up to three different instances without taking up a slot. Both are thus only really constrained by their points costs and relative worth so the question then becomes how does a unit of psykers compare to just one? The answer is both simple and unfortunate - poorly. The most important aspect of the new Psychic Phase is your warp charge generation and that means maximising your Psychic Mastery Levels as best you can. Primaris Psykers can provide two warp charge dice at three quarters worth of points from a century, whereas Wyrdvane Psykers are capped at one warp charge dice regardless of whether they number the minimum five or maximum ten in the unit. Primaris Psykers with Psychic Mastery Level 2 are significantly cheaper than taking two separate Wyrdvane Psyker squads and are thus your most efficient source of warp charge generation, ear-marking themselves as the best choice when considering how ridiculous psychic defences are for a certain few armies like Eldar.

When measured by their other qualities, I feel the disparity only grows rather than retracts even despite how seemingly useful all those extra wounds would be for Perils of the Warp and Barrage sniping. Wyrdvane Psykers are laughably easy to kill with one wound each at Toughness 3 with a terrible 5+ armour save, meaning that Barrage snipes would just kill the entire unit rather than potentially single out a Primaris Psyker. Perils of the Warp is about the only potential advantage here for a Brotherhood of Psykers over an Independent Character but since most of the results are based on a Leadership test this could actually be seen as favouring the Leadership 9 Primaris Psyker, especially as many of the D6 rolls won't result in his or her death. Despite being able to take either a Chimera or Taurox as a Dedicated Transport - which would only really matter if either of those were as dominating as a Wave Serpent - there are very few situations where the lone squad will require more investment to remove by an opponent over a Primaris Psyker hiding in a blob squad.

Additionally, Wyrdvanes are ridiculously susceptible to melee attackers with two pathetic Strength 2 Weapon Skill 2 attacks each at Initiative 3 - even Tactical Marines will laugh at the "combat prowess" of such a squad! Wyrdvanes lack any real reason to be taken over Primaris Psykers seeing as the latter is a much cheaper source of warp charge points when upgraded to Psychic Mastery Level 2 and is far more difficult to single out. Both squad and character share the exact same psychic disciplines while being less susceptible to Perils of the Warp is almost a non-issue seeing as the majority of them only inflict one unsaved wound at worst. If Wyrdvanes actually kept their two unique psychic powers from the 5th Edition codex then they would have fared a lot better as there would have actually been something to properly differentiate them from the more cost-efficient Primaris Psyker, but alas those were removed as well in favour of random generation. Two psychic powers through the Psychic Focus special rule is nice and all but hardly a point of note seeing as the same applies to the Primaris Psyker.

Best Uses
As much as their previous uses involved suicidal runs in Chimeras as an attempt to destroy nasty enemy units with either of their two ridiculous unique psychic powers, the renamed Wyrdvane Psykers really need to be kept near the bulk of your forces so as to not waste the all important warp charge die they provide. While Grey Knights and Tzeentch Daemons aren't as prominent in the 7th Edition competitive scene as many may have initially guessed, they are nonetheless popular forces that can and will shut down all of your psychic powers through the ridiculous number of warp charge dice they generate. It doesn't help that the way in which psychic powers are manifested is now far less reliable with a power as good as Prescience now requiring up to four or five dice to reliably cast successfully, which in turn invites more common Perils of the Warp results. Whether they are in a Chimera as part of a mechanized force or hiding in a ruin and supporting the Combined Squads, Heavy Weapon Teams and so on, these units are just so fragile and make for very easy prey.

They can cause quite a bit of harm with their Psychic Powers and the number of wounds in a unit does allow them to more safely court the Daemonology disciplines, though I just don't see this as an aggressive unit given how lacking they are in damage output and survivability. As for which psychic powers to generate, the new Psyker rules allow them to attempt to manifest even Warp Charge 2 or Warp Charge 3 powers regardless of being Psychic Mastery Level 1 themselves, an important note given how powerful certain psychic powers are in 7th Edition. While they unfortunately cannot generate from the Telepathy discipline and thus take a stab at rolling up the completely over-powered Invisibility, rolling up something like Telekine Dome for a foot-slogging list or Endurance for a Bullgryn Wall will justify the points spent on the unit in an instant. They are pretty diverse as far as psykers go with access to a total of six psychic disciplines and so you should always have a different use for them depending on which role needs fulfilling, whether it be a cheap witchfire-slinging unit with Pyromancy or a dedicated support squad with Divination.

Thank you all for reading this article! While the new psyker rules can be a little bit intimidating and especially so against certain armies such as Grey Knights or Tzeentch Daemons of Chaos, Wyrdvane Psykers are nonetheless an interesting unit to partner your Primaris Psykers with to provide incredibly powerful augmentative effects to the rest of your forces. Wyrdvane Psykers are also less worried about Perils of the Warp results for the most part and thus make for a "safer" nexus for Daemonology powers, even if Divination is arguably all an Astra Militarum list really needs to be truly successful. I thank you again for taking the time to read my thoughts on Wyrdvane Psykers and I hope you all have a lovely day!
at 6:26 pm