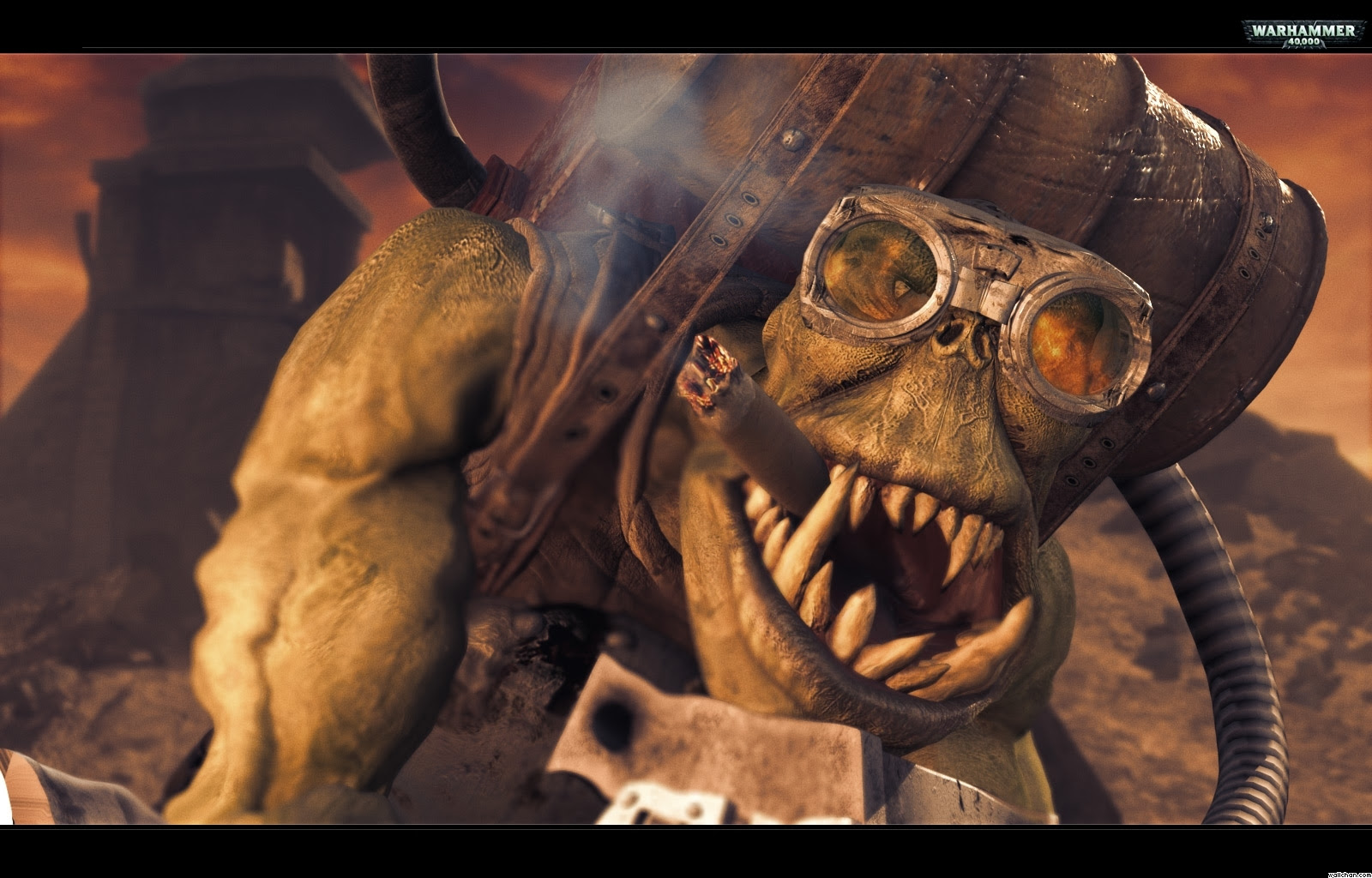 While this unit was a staple of many Ork lists in previous editions, I'm not as certain of their competitive validity with the new codex given all the various changes wrought by 7th Edition. While being able to fire out of an open-topped transport - such as a Trukk or Battlewagon - twice in one game turn via the friendly Shooting Phase and Overwatch is awesome, that enemy template weapons inflict automatic hits on the occupants of an open-topped transport serves to make the costly but fragile Burna Boyz even more of a risky inclusion. They absolutely require a transport but both Trukks and Battlewagons are comparatively worse than they used to be, even with the new vehicle rules, due to changes to their own codex-specific rules and vehicle wargear options. 7th Edition might not be drowned in gun-lines as 6th Edition was, but those builds are still the most prominent by far, particularly mobile ones that care little for a unit bearing only Strength 4 template weapons - an Eldar list laden with Wave Serpents practically laughs at Burna Boyz even if Meks with Killsaws are present, as an example. Assuming you use the templates more than the power weapons because they offer the squad some actual ranged presence - and make them incredibly nasty against infantry of all kinds - they do benefit hugely from the introduction of Overwatch in 6th Edition, however, even though being incapable of firing at zooming flyers and swooping flying monstrous creatures does limit their potential targets.

My issue with the reliance on the actual template portion of the Burna itself is that Burna Boyz pay an excessive amount of points - they are just under three times the cost of a standard Ork Boy - for a power sword they will rarely use, and a template weapon that is still only equivalent to the regular flamer often carried by Space Marines or Astra Militarum squads. When you consider that they are practically worthless against vehicles - unless you count over-priced Killsaw-wielding Meks - and how pitifully limited their range is (they have an effective 14" range on foot once their movement is accounted for) it is too darned easy for them to be "kited", where enemy squads can simply retreat slightly and continue firing at the expensive Burna Boy unit that only has Toughness 4 and a 6+ armour save to protect them. I'm just not that impressed by Burna Boyz here, especially when compared to the re-imagined Tankbustas that are just so much better than they were previously. This is why I only really feel comfortable with smaller units of Burna Boyz; five well placed templates are more than enough to put a serious dent in nearly any infantry squad, especially other Xenos units. You can use the templates to fire at the enemy, protect yourself in Overwatch if the enemy charges you for whatever reason (unlikely), then if the squad manages to survive they can use their power weapons in the subsequent round of combat in the second turn.

That's not terrible by any means as two AP3 attacks each standard simply can never be a bad thing, but remembering that Burna Boyz are still Strength 3 I'm just not sold on using them as a dedicated melee unit either - they won't do all that much in a combat when they need 5s to wound the most common 3+ armoured units in the game; Space Marines. Sure, you can declare a charge with them and refrain from using the actual Burna's themselves, but with enemy Overwatch, random charge lengths (though the re-roll on one dice for Orks does help) and their pitiful Initiative 2 and "only" three attacks each at Strength 4 on the charge, I just can't recommend prioritizing the power weapons over the templates unless you really need the squad to get into combat to safeguard it against highly concentrated ranged attacks. Burna Boyz might be an Elites choice but they still maintain an identical profile with Ork Boyz, meaning they are Weapon Skill 4 and Initiative 2 units with two attacks each on their base profile. Toughness 4 with a 6+ armour save makes them incredibly vulnerable to anything from lasguns to lascannons, and while this might be expected of Ork units and is true of a lot of the other Elites, most of them aren't priced at a whopping 17 points per model. 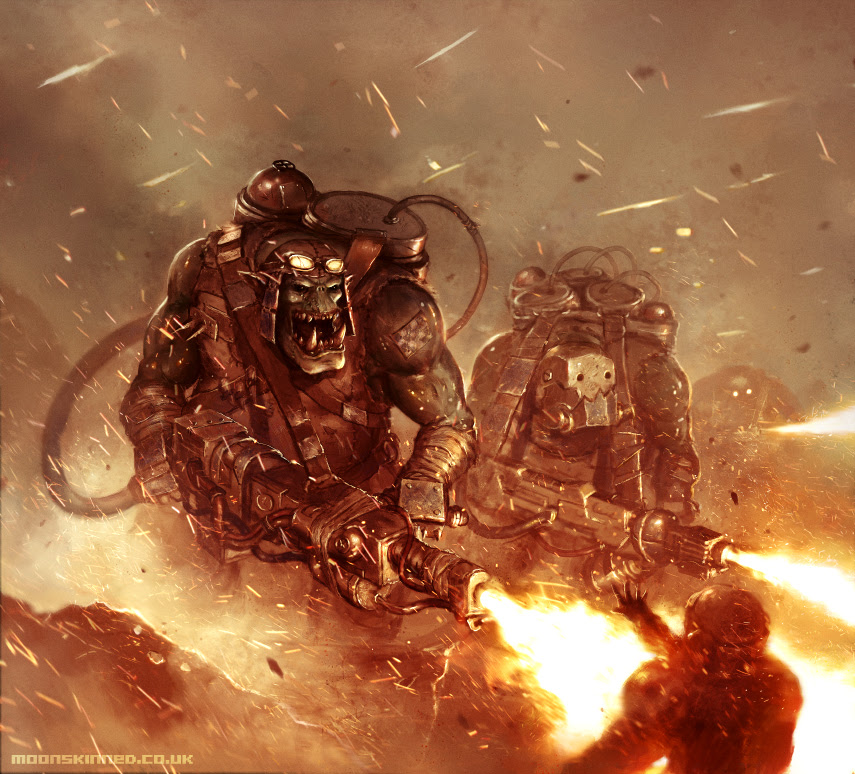 Burna Boyz die just like a 6 point model but pay three times as much solely for significantly enhanced close range damage output, meaning they are entirely reliant on transportation and thus mobility to ensure they come anywhere close to proving their worth in an Ork force. With the big nerf to Ork Trukks through the tweaked Ramshackle rule and an arguable nerf to Battlewagons with template weapons having a greater effect against open-topped vehicles as well as the actual points increase of the unit itself - mandatory assault grenades, hooray for Initiative 2! - I just can't see them ever being as great as they used to be. The issue then becomes that Orks generally lack massed template weapons for dislodging entrenched cover-camping infantry units outside of Burna Boyz, though this is arguably where Lobbas, charging Boyz and the like make up for that particular deficiency. Now, I don't think this unit is bad as they are far from deserving that label, but the reality is that they pay too much for abilities that are heavily limited in a 7th Edition context, especially considering Orks lack anything similar to a Space Marine Drop Pod.

Seeing as only Meks in the unit can actually take any options, my thoughts strictly apply to them alone. While I'm not a fan of paying a lot of points for power fist equivalents on easily killed Meks, these ones are always attached to Burna Boyz and thus they should always be getting up close anyway. Grot Oilers are a nice extra if you plan on running the Burna Boyz inside a Battlewagon, Morkanaut or some kind of open-topped transport, but are otherwise unnecessary as Trukks rarely last long enough to be subject to repair rolls. Kombi-weapons with Skorchas can help the Burna Boyz deal with 4+ armoured units more effectively, but generally 4+ armoured units will drown under a weight of Strength 4 AP5 templates anyway. Now, whether you actually want Meks in the unit or not probably depends on how expensive the transport for this unit is; in Trukks, I would probably skip them unless you have a specific plan with the Killsaws or some of the various Mek Weapons in mind.

Burna Boyz are quite expensive given how crazily fragile they are - Toughness 4 and a 6+ armour save won't get you anywhere in a hurry - and the times in which they actually get in range to use their Burnas will often see them be pummeled and destroyed in turn once they have finished with a unit. They need transports to make up for their complete lack of ranged firepower outside of 8" template weapons (unless you count the Stikkbombs), meaning Trukks or Battlewagons are preferred for any build. They want to use their Burnas in Overwatch or in a Shooting Phase typically as enemy Overwatch and the poor Initiative of the Orks means combat isn't always the best answer, despite having unit-wide power sword equivalents. Even five Burnas with good placement can land a ridiculous amount of hits on a unit(s) and tear apart most infantry squads, while the power swords can be used in the second round of combat or on the charge as necessary if you are fighting 3+ armoured opponents that are resistant to Burnas - this is particularly apparent against Salamanders Space Marines. Still, the risks generally don't outweigh the benefits as using the Burnas is still much safer overall than charging in and using the "power swords", especially with Overwatch taken into account on both sides. 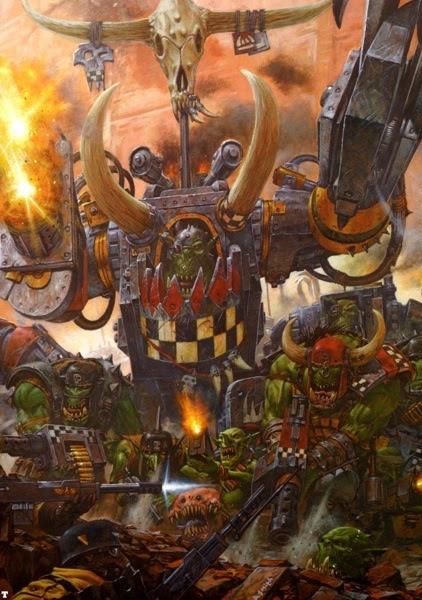 While there are numerous ways to run squads of Burna Boyz, these tend to be my favourite builds;

Burna Boyz (10) - Two Meks, Two Grot Oilers (170 points) - This is your stock-standard Burna Boy mob rolling around in an open-topped Battlewagon, making it a literal moving fortress of flame by destroying any unit that attempts to charge it or gets within close proximity of it through Overwatch and so on.

Burna Boyz (5) - Trukk (110 points) - The problem many have with Burna Boyz is that they often just obliterate whatever they get close enough to shoot without needing so many Burnas, or they die to massed small arms fire once their transport is seemingly inevitably destroyed. Smaller units in Trukks may be the more cost-efficient way to run Burna Boyz, especially as you will often only need a handful to reach enemy lines for them to crush a unit into submission with their three Strength 4 AP3 attacks per model on the charge.


Thank you everyone for reading my thoughts on Ork Burna Boyz, a unit that has undergone many severe changes indirectly due to 6th Edition and 7th Edition in particular. I'm not the biggest fan of the unit but I can see their role in certain Ork lists that lack another good means of removing infantry en masse without relying on close combat or artillery. I guess I would be more of a fan if Burna Boyz were brought in line with the significantly improved Tankbustas, at least in terms of points cost, but I guess I can understand why they are priced as they are in some cases. Anyway, I look forward to hearing your feedback on the article and whether you have had greater success with Burna Boyz than I have; have a great day!
at 7:46 pm