Greetings brothers and sisters and welcome to my latest work regarding our fellow Knights of Titan, the Grey Knights! While this particular entry in the series won't actually feature any individual unit reviews, it still fits in with my miniature-review and as such I felt it prudent to cover the artefacts and formations on offer in the codex. Thankfully, the Grey Knights do have an excellent unique detachment that acts as a catalyst for enhanced competitive lists with its focus on short-ranged destruction and maximising the safety of each unit after they perform their individual alpha strikes. I hope you enjoy this article! 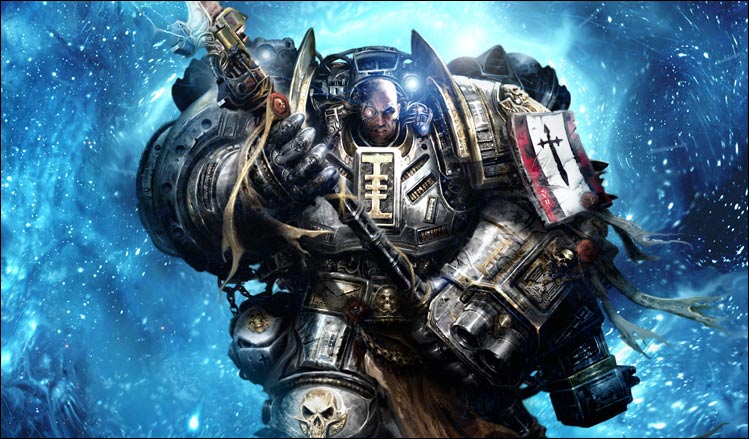 Nemesis Strike Force Detachment - As far as unique detachments are concerned, this seems like one of the more restrictive at first; only 4 Troops slots, 2 Fast Attack Slots and 2 Heavy Support slots with 4 Elites slots being the trade-off doesn't leave a good first impression. Ultimately though, typical Grey Knight builds in 1850 points or lower generally won't fill up a standard force organization chart anyway because of their high points costs and as such the "restrictions" here aren't really hurtful in practice. Having only one compulsory Troops choice can help players for skipping a slot they may not necessarily want to invest too much into, while the extra Elites slot is only really there for builds laden with both Paladins and Purifiers (though the latter unit requires Drop Pods in this detachment for it to work effectively). The main reason to include the Nemesis Strike Force detachment, however, is that it provides all units in the formation with the option to arrive from Deep Strike on turn one while also mimicking Eldar by being able to both run and shoot in the same turn that they arrive from Deep Strike. This is an insane buff for Deep Striking units - which Grey Knights have plenty of without having to pay for transports - and allows them to either get into a better position or even get in range before firing, or shoot and then spread out to reduce the damage dealt by incoming blast weapons used by the opponent. The other minor benefit of the detachment is to allow the Warlord to re-roll their Warlord Trait when using the chart in the Grey Knights codex, but considering the codex has a very mediocre table, this is definitely something to forget.

Grey Knights Brotherhood Formation - Whereas there's little reason to skip the Nemesis Strike Force if your army composition suits it, the Brotherhood Formation mimics the Great Company Formation in the Space Wolf codex by forcing you to use a combination of mostly mediocre or unwanted units just to receive the same benefits (plus one) as the superior detachment that shares no such restrictions. As mentioned above, re-rolling results on the Grey Knight Warlord Traits chart isn't much of a bonus given how overwhelmingly mediocre that table is, though the exclusive bonus to using this formation - manifesting warp charge points on a 3+ for each Grey Knight unit while the Grand Master survives - is actually rather nice given how psychically active the army is. Still, the formation itself has some mild identity issues; the aim of this and the detachment is to Deep Strike and do so better than other armies as Grey Knights should, yet Brotherhood Champions, Dreadnoughts and Purgation Squads are natively incapable of performing that feat. The unit composition itself is poor - the Brotherhood Champion is wasted points, the Dreadnought doesn't fit with the rest of the force, the Purgation Squads are poor, you usually want only one out of a Grand Master and Brother-Captain, Strike Squads may as well be without a job next to Terminator Squads - and as such I just can't rate this formation competitively.

Bone Shard of Solor - Considering how specific this items' abilities are, it is a good thing that it has such a low price as otherwise it would be practically worthless in most Grey Knight lists. Unless your opponent lets you know in advance that they are using Daemons and you plan accordingly, there's little reason to equip this; of course, it was obviously introduced with every psyker in the game having the potential to summon daemons via Malefic Daemonology. If you have the points spare, it is worth it for the potential to provide your probable Warlord with a massive survivability boost, but otherwise you may as well skip it.

Cuirass of Sacrifice - If you are employing a Brother-Captain or Grand Master as your Warlord or wound-tank type character then this piece of equipment is absolutely worth all of the few points it costs, cheaply providing both Feel No Pain and It Will Not Die to the bearer while otherwise functioning exactly like Terminator Armour. If you plan on running the bearer with Paladins then you should skip this as the units' Apothecary will provide him with Feel No Pain anyway, but otherwise I would always take this for the crucial few wounds it can protect.

Domina Liber Daemonica - A Relic purpose built with Librarians in mind, this is priced identically to a psychic mastery level and provides the bearer with an extra psychic power in addition to giving himself and friendly Grey Knights within a tiny radius the option to re-rolls 1s when manifesting Sanctic Daemonology powers. I typically find my Grey Knight units to be rather spread out given their low numbers, but this is still a nice upgrade - just keep in mind that if you have a choice between this and the extra psychic mastery level, take the latter every time as it gives you an additional warp charge die.

The Fury of Deimos - A trend with every recent codex is to provide players with an inexpensive relic that amounts to a slightly upgraded version of a typical HQ choices' stock ranged weapon, and the Fury of Deimos in the Grey Knight codex continues this repetition. It has increased range, an extra short, master-crafting and Precision Shot so I would say it is definitely worth it for all the buffs, but ultimately it's really rather unnecessary as it is still basically just a storm bolter.

The Nemesis Banner - As I mentioned in my Paladin review, the Nemesis Banner is easily worth the extra 10 points over a regular Brotherhood Banner seeing as providing Grey Knight units with Fearless ensures your handful of models will never flee from objectives or off the board. The focused debuff against Daemons is essentially just an added value bonus.

The Soul Glaive - Acting as a Nemesis Force Halberd with some minor added benefits, the Soul Glaive is 18 points more expensive than its' generic equivalent and provides the bearer with the unique Soul Imprint special rule. The re-rolls for casting Force and on the Soul Glaives' attacks are nice but with easily accessed Hammerhand, a minimum of two casts of Force per unit with an attached character and the Grey Knights' psychic phase dominance, this weapon is ultimately rather disappointing for its cost. It's not too expensive at least and as such it won't actively penalize you for including it on a Grand Master, so it is at least decent for maximising their melee damage output especially when fighting against monstrous creatures. 1) Daemon-Slayer - Considering that all Grey Knights already have Preferred Enemy (Daemons), gaining Hatred (Daemons) on the Warlord only doesn't really seem to be worth keeping this trait. The second buff seems pretty handy but seeing as every Grey Knight unit either has or can freely take Banishment, it's not as good as it appears.

2) Hammer of Righteousness - Providing Hammer of Wrath to an entire unit of Grey Knights boosts their melee capabilities nicely, though ultimately it is a minor boost more than anything else if the Warlord joins a Grey Knight unit with their universal base Strength 4.

3) Unyielding Anvil - Providing Stubborn to Grey Knight units considering they are mostly Leadership 9 is very helpful for making sure they stick around when you want them to, but one could argue And They Shall Know No Fear or Fearless on all available units mitigates the need for this.

4) First to the Fray - In honour of Grand Master Mordrak, this is possibly the best reason to roll on the Grey Knights Warlord Traits table as it gives your Warlord and any unit he joins some of the buffs provided by the Nemesis Strike Force detachment - which are awesome. Ideally you want to combine this with Terminators or Paladins.

5) Perfect Timing - Providing Counter-Attack to a unit of Grey Knights is cool and all, but they are generally the ones that should be launching an assault - it's a nice buff with their high Leadership and force weapons, make no mistake about that.

6) Lore Master - Knowing an extra psychic power from Sanctic Daemonology is an awesome way to essentially save yourself 25 points on a psychic mastery level upgrade, and it is easily one of the two better warlord traits present in the codex - the other being First to the Fray.


Thank you all for reading this article; I hope you enjoyed it or found it useful! I am pleased to close out my review of Grey Knights in such a short amount of time, even if it is more indicative of a tiny codex lacking in unit diversity than anything else. If you have any critiques or other feedback for me, please leave a comment below and I will do my best to address your concerns. Thanks again and have a lovely day!
at 1:05 am