Howdy guys, my name is Learn2Eel and today I'm going to be looking at two subjects very close to my heart; Imperial Knights and Vampire Counts. Now, while I might be a pathetic bandwagoner, I am honest in my appreciation of these two particular armies and what they mean for my hobby life-style. As an aside, I have a few early impressions of Dwarves to give!

So Imperial Knights are definitely a thing now, and well....what can I say? The models are absolutely gorgeous and my pick for the best plastic kit Games Workshop has released since I returned to the hobby in late 2011. They are massive at 8" tall (strangely, this has been amended to 6" on the Games Workshop website) making them roughly the same height as a Wraithknight (though if they are 6" then they would be a similar height to a Riptide or Trygon) and are at least three times as bulky as their Eldar equivalent, yet the kit manages to stay at the $155 (AUD) price point (or $30 higher than the Wraithknight). This is a really aggressive price point I feel and compared to most other kits of a similar size, the Knight with its extensive visual customization options and possible poses is definitely one of the best value for money kits Games Workshop has ever produced. Especially with a 375 point cost as opposed to its $155 monetary cost, the Imperial Knight is one of the best models for boosting your army up quickly.

The rules are also very solid, especially with the clarifications from White Dwarf Editor Jes Bickham on the Games Workshop Digital Editions Facebook page. Imperial Knights are very durable, ignoring all but the Explodes! result on the vehicle damage chart as super heavies - and having a certain type of immunity to that as well - and getting a 4+ invulnerable save against shooting attacks on one facing per turn. With six hull points and AV13/12/12 an Imperial Knight will be very difficult to bring down, especially at long range. Some really cool features of being a super heavy walker is that the Knight can make D3 Stomp attacks, placing small blasts in the combat to help it get out of tarpit units quickly, while it also gets to move a whopping 12" a turn. Throw in a really potent main cannon for either Knight variant, and a D-Weapon melee combat arm and the Knight is a versatile and powerful model indeed. The clarifications Jes Bickham added only sweeten the deal, making Knights scoring models when taken as an army unto themselves and with one able to be a Warlord. An army of super-heavy walkers at 370-375 points each that can score? There are only there words to describe such a force; holy smokes Batman!

I'm definitely sold on Knights. I don't think they are going to be necessarily over-powered, simply because as much as they may be scoring, they aren't denial units. They may delete a unit a turn, but if they focus on what can kill them - and mind, you can only fit four Knights at 1500 points, or five Knight Errants at 1850 - then a savvy opponent can merely sit on objectives. Each Knight lost is also a massive blow, destroying about 25% of a typical army list at 1500 points. They will be tough, particularly for Orks, but they will hardly be infallible. It is for this reason that I am now set on starting them as my next and primary 40K force. They make the most sense for me; they are cheap money-wise compared to many other armies I would want to do, and they are the easiest to transport when one considers the rest of my case(s) are filled by teeming hordes of Undead Vampire Counts. They are a perfectly legal 40K army, but if a player doesn't want to give me a game, I'll accept it and there will be no fuss as - like the Armoured Battle Group - a non-competitive list built a certain way could find the game impossible to win. I'll let opponents know in advance that I am using the Knights in case they want to make any army list changes - within reason of course! - so that the game is fairer if need be, though I feel it won't be necessary for the most part. Plus, the models are just awesome and some of my favourite ever released.

With that in mind, keep your eyes peeled for an Imperial Knight Tactica Series somewhere in the future when I have an army built up!

So these little guys have been out for about a month now, though I have yet to comment on them until now. Why, you might ask? It's simple; I still do not own an army book, and have only glanced through it once. I'm just not as interested in Dwarves as I would be in an Elvish army - the latter species have always appealed to me more. The Chaos Dwarf army I was planning on doing is currently off the books with my blazing interest in Vampire Counts reignited by some recent purchases, though I am still planning out my secondary non-tournament Fantasy army. Dwarves are cool in that they let you make the toughest generic character in the game, a Dwarf Lord that can get a 1+ armour save, 4+ ward save, Toughness 7 and 6 Wounds while remaining an Infantry model that gets Look out Sirs as normal. Oh, and that still runs less than 300 points. Yikes! Their Runesmiths giving a unit Armour Piercing is really cool, especially as Dwarven characters get 2+ armour saves at an incredibly low cost on foot; this makes the Runesmith excellent value for points indeed. Having 4+ armoured Core models that are Strength 4 on the charge with 5+ parry saves on the first round in addition to army-wide Toughness 4 is something I think many people are under appreciating! Hammerers and Ironbreakers are some of the best heavy infantry I can think of, while Irondrakes bring the pain in the Rare section. Add in an updated Flame Cannon that matches the Chaos Dwarf one and you have yourself a very solid little book. Is it enough to bring me over to the short side? Probably not, but I will entertain the prospect of giving them a proper review or Tactica down the line. 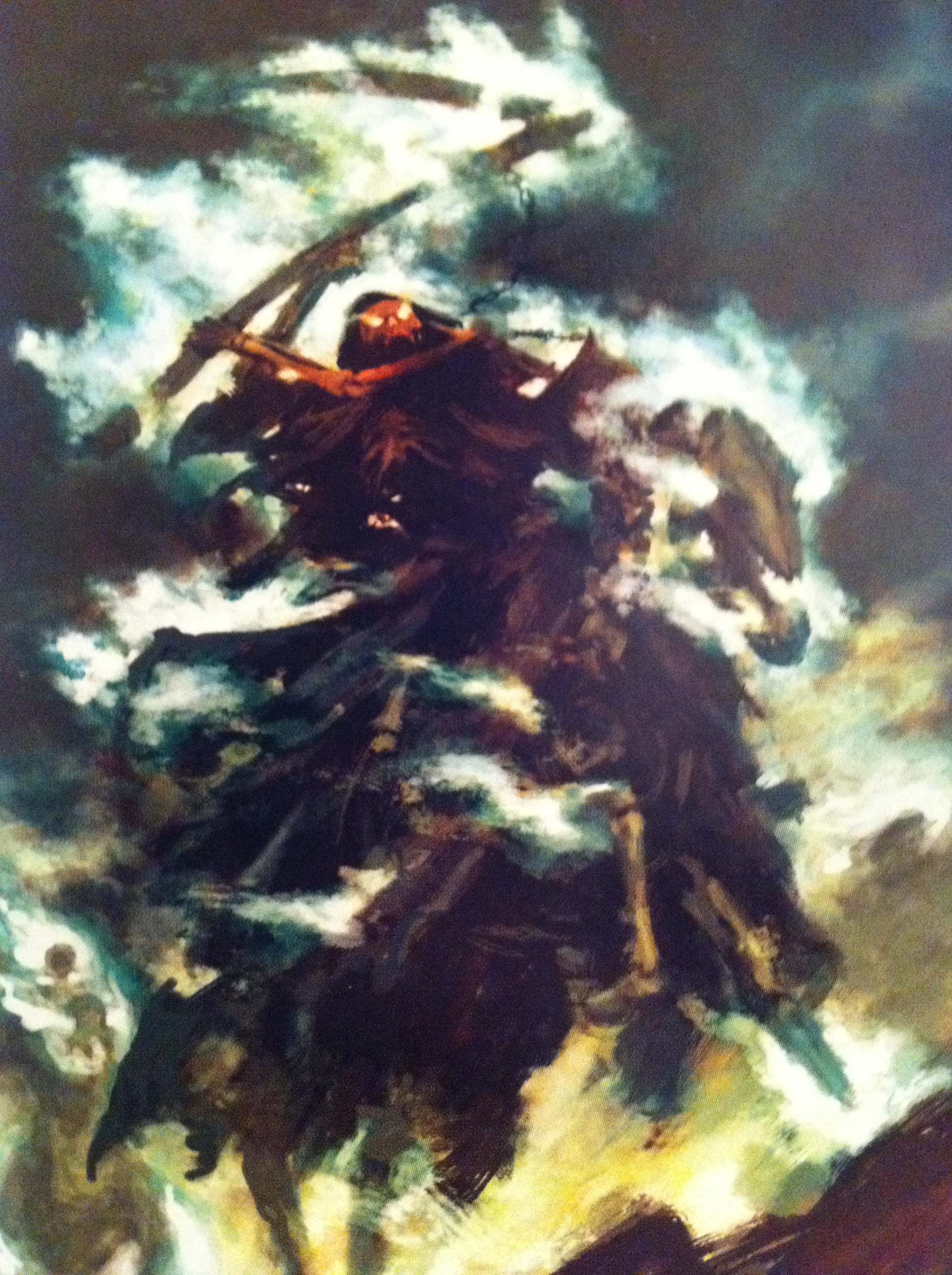 This week has finally seen the completion of my 2500 point Vampire Counts army list after nearly six months of toiling on and off with the army. They are my one and only Fantasy army at the moment - not counting my side-lined High Elves - and last Wednesday was definitely a good day to be a Vampire. I ripped my old High Elf Swordmasters and a pair of Phoenix Guard I randomly owned off their bases and turned them into three Spirit Host swarms, while I completed the force with two Hexwraith boxes. Chuck in the box of Ghouls and Dire Wolves last week and the list, while different to the one I originally wanted, is definitely something I am proud of. I got a lot of games in over the past few days with that list mostly as a testing ground for my five new Ethereal units. To say I am pleased would definitely be an under-statement! Spirit Hosts are just too darn good as solo units for less than 50 points, able to tie up enemy chaff and small cavalry units for an entire game. One was able to hold up a unit of 10 Dark Riders for a whopping five game turns, while another held up a Bastilidon before it could do anything of note. They have been the most consistent for sure, but they are also the easiest unit to use I feel - just avoid ranked infantry and magical attacks!

Hexwraiths are a different story entirely, being lackluster in two games and stand-outs in the other two. The first game saw them capitulate to an Oldblood on a Cold One due to my stupidity, teaching me to not be too aggressive with them. The second game had them unable to do much of anything other than harass that same Cold One Knight unit due to my poor rolling and movement. The third game saw one unit hold up a Lion Chariot for much of the game with me laughably failing to kill it for most of the game due to inexplicably only getting one hit in each combat phase. The other unit had some fun by knocking a big block of Archers out of a tower, so that certainly helped. The fourth game was where they really shined, with one unit holding up a 10-strong Cold One Knight unit for all but the last turn despite being charged on turn one, while the second unit wiped out first a block of 10 shades and then the remnants of those 10 Dark Riders I mentioned earlier. Hexwraiths are an expensive and finicky unit, but one that has been pivotal in three of my four games so far simply because my opponents have all been very timid around them. This I like!

As an aside, I'll post up my current Vampire Counts list for everyone's perusal to see just what kind of army floats my boat. This isn't really a themed list, but it is based around the Lahmian Vampires with an awesome converted female Vampire Lady as my general. The list is built around out-deploying my opponent with a whopping 9 chaff units, allowing me to deliver my Black Knight unit and Vampire Lady to ideal positions. This means getting into combat with units I can crush without risk of the Vampire Lady dying while still racking up lots of victory points. The Terrorgheists and Hexwraiths, depending on the situation, generally operate around the Vampire Lady with her march bubble and (hopefully) Van Hels Macabre. The Necromancer and Zombie block, while hardly ideal as I really should be running smaller Zombie units and raising them up, give me a nice solid block that can tarpit almost anything. I like it this way as I only have 50 Zombie models and have no interest in purchasing any more. The Ghoul block was the cheapest money wise to complete instead of doing the massed Zombie units I wanted to, and they have done decently for me so far. They really aren't that good I feel though, and can't afford to go anywhere outside the Invocation range of either the Necromancer or the Vampire Lady. The Dire Wolves do their job, as do the Terrorgheists. The only thing this army really lacks is a Dispel Scroll, honestly. As far as the Vampire Lord lacking the Other Tricksters Shard goes, I prefer the 1+ armour save so far in my games to the 2+ because of my usual opponents, also just a tight points thing.

Heroes
Necromancer w/ level one wizard, lore of the vampires I'm thinking I will try and get back to wherever I was in the long overdue Vampire Counts Tactica, though to be fair I am still learning all of the Fantasy rules and tricks. I'm still pretty inexperienced with chaff usage, something I hope all those Dire Wolves, Spirit Hosts and Hexwraiths will solve. I'll let you know how that goes the next time I do one of these "off" posts!


Ok, that's all for today folks. I'm eager to hear what you are all up to in your hobby lives at the moment, and what your thoughts are on the new releases over the past month. I'm excited about Imperial Knights and what adding a new faction could mean for the future of Warhammer 40000, while I have well and truly broke new ground in Fantasy with a fully fledged army - finally! Thanks for reading and have a great day! Eel out.
at 10:32 pm