Hey guys, my name is Learn2Eel, and today I'm going to be bringing you another article in the Tyranid Tactica series! Rippers have been a staple of the Tyranid race for several editions now, and are one of the few Swarm units remaining in Warhammer 40000. Unfortunately, their luck in the past few codices has steadily decreased, something that the new book has failed to address. This does not mean they are useless, however, merely that you have to use them in very specific roles to enjoy and real viability out of them. I hope you enjoy this article! 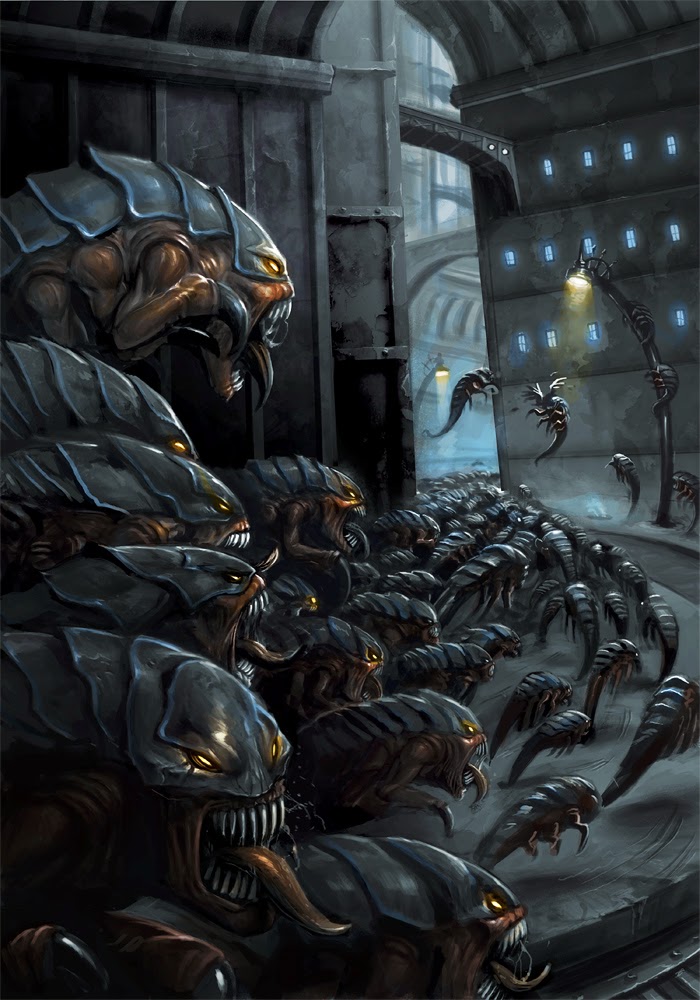 I'll preface by giving a sad nod to these little guys that could. Each new edition and codex just serves to make Rippers more and more unusable. I'm hoping the next Tyranid codex fixes this problem and makes Rippers a worthwhile unit again. In any case, Ripper Swarms are intended to be your third cheap fodder unit alongside Hormagaunts and Termagants, but with a twist. As the name suggests, they are Swarm bases instead of just regular infantry, and this comes with a lot of unique traits. First off, don't get any ideas about using these as cheap Fearless scoring bodies as Swarms cannot capture or deny objectives. Secondly, they are more prone to template weapons than normal, suffering double the wounds; if a flamer inflicts two wounds on a single Ripper Swarm base, that would multiply into four wounds and thus kill the Ripper Swarm base outright. The main difference between a Swarm base and a standard infantry model is that a Swarm has more attacks and wounds than normal, with Rippers in particular having four attacks and three wounds. Their damage potential is low, however, with a meagre Weapon Skill and Initiative of 2 meaning they will usually strike last in combat and be hit on 3s. That they have three wounds each is nice against small arms fire, but once you start seeing Strength 6 weapons, Ripper Swarms begin to evaporate. They lack an immunity to instant death and thus any Strength 6 or higher weapon - Wave Serpents with their cover-ignoring Serpent Shields will have a field day here - will kill them outright. With only a 6+ armour save, Rippers are incredibly easy to kill and thus require exploitation of their tiny model sizes to hide behind terrain.

What would be about chest-deep on a Space Marine will fully cover a Ripper Swarm base, meaning they can easily have line of sight blocked to them. Aside from being a tarpit unit against Strength 3 and 4 attacks, don't expect much out of Rippers though; they are a mere Strength 3, even with a slog of attacks, and their low stats otherwise mean they aren't ever going to do much of anything in terms of damage. Uniquely, Rippers - and Sky-Slashers by extension - are the only non-Synapse unit in the codex that is affected by Instinctive Behaviour and is Fearless. This means once they reach combat, they won't be going anywhere in a hurry if your opponent lacks Power Fists, Power Mauls or other sources of Strength 6 or higher attacks. However, they are still prone to Instinctive Behaviour, and as feeding organisms, there is a 50% chance on each failed Instinctive Behaviour roll that they will stop doing anything and just eat themselves. As Swarm bases, they aren't likely to lose too many models to this, but being unable to do anything is still a terrible result. Compounding the issue is their pathetic Leadership 5, meaning they will fail the majority of Instinctive Behaviour tests they take. As such, keeping them in Synapse may as well be mandatory, almost to the extent that it was in the old codex! Interestingly enough, Rippers remain one of the few Swarm units in the game that can take a ranged weapon, even if Rippers are hardly an ideal shooting unit. They also have access to a number of close-combat oriented upgrades such as Adrenal Glands, while they can purchase the Deep Strike special rule to give a Tyranid player extra flexibility in the deployment phase. I'm not really a fan of upgrading Rippers aside from Deep Striking though as they are pretty horrendously over-costed as it is and the only worthwhile upgrade is also the only cheap one.

Rippers are already expensive, so adding extra upgrades to them is something I would avoid, as they die easily just the same. Toxin Sacs and Adrenal Glands are the two close combat upgrades available to Rippers, and for the most part I prefer the Adrenals. Five Strength 4 attacks per Ripper base with Fleet is pretty decent, though you mostly just want the Fleet. Toxin Sacs, again, are the better overall combat upgrade if you plan on fighting anything that isn't Toughness 4 for more than one round, but Fleet from the Adrenal Glands does make up for this. Remember that Toxin Sacs also aren't as good for Rippers against monsters as you might believe; any monster can Smash, and many have a base Strength 6, meaning they can inflict instant death on Rippers with incredible ease. At Initiative 2 and Weapon Skill 2, most monsters will be hitting the Rippers on 3s and striking before they can. Rippers can take a ranged weapon in the form of Spinefists which, with their Ballistic Skill 2 and four attacks base, allows each Ripper Swarm to put out four shots at Strength 3 hitting on 5s with re-rolls. It really isn't that great, especially as you can take four Termagants with Spinefists for slightly less who put out the same number of shots and are Ballistic Skill 3. I would just avoid them, especially as they too are not a cheap upgrade, in favour of Adrenal Glands or the next possible upgrade. Indeed, Rippers can purchase Deep Strike as per the previous codex, and it is the cheapest upgrade available. If you want cheap tarpit units, keep the Rippers bare as upgrades jack up the cost of the unit very quickly. If you want a unit that is cheap, can drop in the opponents' deployment zone and maybe draw the attention of a small scoring unit or try and tarpit a Devastator-equivalent unit, then take the Deep Strike upgrade. The other upgrades really aren't necessary for Rippers, and while certainly helpful, they don't do anything to help their survivability against incredibly common Strength 6 or higher weaponry that will flat out murder Ripper Swarms.

Rippers, like Termagants, can be hidden behind an Aegis Defence Line and completely out of sight. Their Ballistic Skill 2 means they won't make a difference for an emplaced weapon such as a Quad Gun, but they can be used as cheap interdiction units that move from behind an Aegis Line to tie up a melee unit for a few turns. Even with Adrenal Glands, they are slow and far too fragile per model once their Toughness 3 is taken into account for instant death purposes to act as an aggressive tarpit unit. Instead, keep them around Zoanthropes, Tervigons or even Biovores as cheap hold-up units to give your other ranged or backfield units an extra turn or two to do their work in shooting. Hide them either behind other models or behind any kind of terrain; they are tiny for a reason and very easily kept out of line of sight. Another use I see for Rippers, even though it really isn't that great, is to Deep Strike in a forward position and as close as possible to those heavy ranged units that will want to ignore them, but can't afford to if only because they can be tied up for several turns. Pathfinders, Devastators, Heavy Weapon Teams and other such units are prime targets for these; they can either waste a turn shooting at your crazily cheap three to five Ripper Swarm bases, or they can keep shooting at the rest of your army and then get tied up almost indefinitely. With Fearless, once they are stuck in combat Rippers will stay there against those kinds of units, even if they won't actually do any damage.

The only viable use for Rippers that I can see is to hide behind terrain or the low-hanging Tervigon model to act as a cheap, bare three-model tarpit unit that is cheaper than any other such unit you can get and more durable against small arms fire. Have them move out of cover once a close assault unit moves within range of your more valuable unit, such as the Tervigon or a Zoanthrope brood, for example. Try to get in the way to block any charges to the valuable unit, or charge the enemy unit so that they cannot shoot. The other use is to take a medium sized brood of four or five bases with Deep Strike and drop them near vulnerable small scoring or heavy weapon units. These units will typically struggle to fight off Rippers in combat quickly, being tied down for a number of turns. As long as the Rippers are fired at or in some way draw attention from your more important advancing elements, from Flying Hive Tyrants to Tyrannofexes, then the Rippers will have done their job. I don't really see them as being effective in either role, but if you want them to actually make something of themselves, these would be the ways to do it.

Ripper Swarms (5) - Deep Strike - This is a really cheap and surprisingly tough - against small arms fire with assumed cover saves - tarpit unit that can deep strike into the enemy backfield and try and tie up or kill Devastator equivalents. They are so darn cheap for what they do!

Ripper Swarms (5) - Deep Strike, Spinefists - Almost identical to the above unit with one exception; the addition of Spinefists. With four attacks each base, this is a unit that puts out a whopping 20 Strength 3 twin-linked shots at Ballistic Skill 2. It's a pretty darn cheap ranged unit that can put quite a few wounds on Pathfinders and their ilk.

In times of war, disposing of the dead is a grim but necessary task. If left unattended, the fallen attract carrion birds and disease, spreading sickness and death throughout the survivors. In most societies, these bodies are burned and given due respect as worthy foes. The Tyranids, of course, share no such concept. To them, the dead are merely biomass to be fed upon and expunged into digestion pools. So as to not slow down their advance by stopping to perform this task, the Tyranids came up with an ingenious - but brutal - solution; the Ripper Swarms. These tiny parasites leap onto both the living and the dead, tearing flesh apart with razor sharp teeth. Countless beings have been eaten alive by these numberless beasts, and though they are hardly warriors, they nonetheless are to be feared by any among the living.


Thank you for reading this article! Please, share your thoughts on the article and the changes I am experimenting with for this series. I am open to any and all feedback! And remember, for any and all discussion on Tyranids and Games Workshop stuff, head on over to +Bell of Lost Souls. Thanks again! Eel out.
at 8:45 pm