Hello there everyone, my name is Learn2Eel and today sees the continuation of my five-stage review of Infantry Platoons! Where a Heavy Weapon Squad strips out the regular Guardsmen and is focused purely on providing powerful long ranged firepower, a Special Weapons Squad is built to take out either tanks or concentrated infantry positions at close to medium ranges. This is a similarly inexpensive but small and fragile unit that sacrifices bodies for raw firepower; it also coincidentally features a squad size that fits perfectly into a Vendetta. It's probably no small surprise how I would recommend running this unit and I also hope you enjoy this article regardless of its apparent predictability.

This is the fourth of five Infantry Platoon articles. 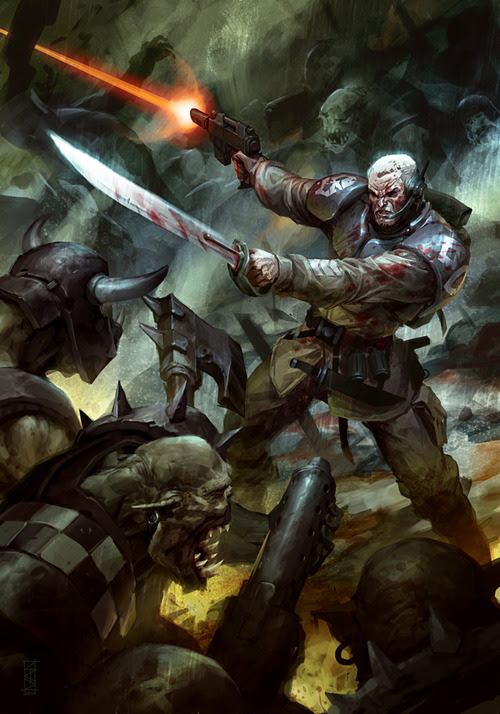 Overview
The idea behind a Special Weapons Squad is rather simple; to provide the focused firepower of a Veteran or Scion unit while working within the constraints of an Infantry Platoon, sacrificing accuracy for a lowered cost and squad size. That the unit is forced to take three special weapons should draw immediate comparisons to Veterans that are also an Objective Secured Troops choice in a standard Combined Arms detachment and sadly I don't think the Special Weapons Squad has the edge here. The price disparity is significant seeing as a unit of ten Veterans is twice as expensive as a six-strong Special Weapons Squad, but the former packs in Ballistic Skill 4, significantly more upgrades to choose from and the all important Dedicated Transport option. If you want a unit packing special weapons like plasma guns or meltaguns then the higher Ballistic Skill option is usually superior, especially as on a per-model basis Veterans are a mere single point more expensive than regular Guardsmen (the models that comprise Infantry Squads and Special Weapons Squads).

The big problem I have with the Special Weapons Squad is less that they are a cheaper yet less efficient specialist ranged unit than Veterans but more that they are incapable of taking a Dedicated Transport option for themselves. This means that they either need to steal a Dedicated Transport from another unit and hop in on the first turn or be forced to use a Vendetta or Valkyrie for aerial insertion, at least if you want to keep to the codex anyway. It's an odd situation to be in as their role is so narrow seeing as they are forced to take special weapons and have no inexpensive, easily accessed delivery option like a Chimera unless they look to Space Wolves or another Imperial codex. Much like Heavy Weapons Squads, I feel that the specialist short and long ranged units in Infantry Platoons seem to have arbitrary and unnecessary limitations or weaknesses that stop them from being the most useful investment of points when contrasted with their competitors. Veterans outclass Special Weapons Squads in all except cost but feature better accuracy and more bodies to boot, while packing your Heavy Weapon Teams into Infantry Squads provides them with much needed protection and gives you access to the awesome Combined Squads in the process. It's a shame as these Ballistic Skill 3 Guardsmen are at least priced identically to a regular Infantry Squad if it was cut down to six models, and they do work very well popping out of a Vendetta or Valkyrie with three flamers to clear an objective and use Objective Secured to capture it.

They are a cheap source of melta and plasma shooting as well but I would argue that Veterans in Chimeras can perform this role so much better with Ballistic Skill 4 and having their own Dedicated Transport. The Ballistic Skill 3 of the Special Weapons Squad isn't really suited to meltaguns or plasma guns, but flamers care little for this discrepancy; similarly, Veterans that pay for Ballistic Skill 4 really shouldn't waste it on template weapons that need no roll to hit. In this case, Special Weapons Squads do at least have a role and it is similar to the objective-clearing Platoon Command Squad riding in a Vendetta - the unit size of six has been around for ages but changing the Vendetta's transport capacity to that same number is not a coincidence - and it comes without sacrificing that units' Orders in the early turns as well. I must clarify that I don't think this unit is bad at all and they function just fine as a suicidal unit, but I must stress that this kind of role is far better performed by Veterans. 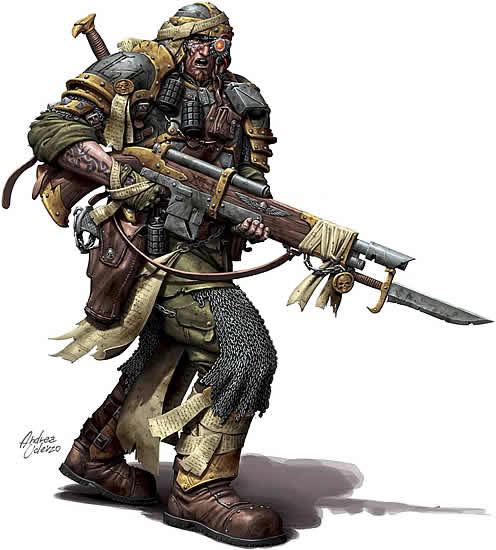 How to Equip Them
Whether we like it or not, I must address the elephant in the room; Veterans are Ballistic Skill 4 and Special Weapons Squads are Ballistic Skill 3. One is much more accurate with the single-shot and rapid fire meltaguns and plasma guns, the other doesn't waste a higher Ballistic Skill by taking flamers. I don't really believe three sniper rifles are going to do much good on a Ballistic Skill 3 unit, even one so cheap when Ratlings are sitting right there in the Elites slot. Similarly, grenade launchers are a poor choice even in the best of circumstances and don't even warrant an in-depth analysis. This leaves the unit to four choices - one exclusive to Special Weapons Squads - in the form of flamers, meltaguns, plasma guns and demolition charges.

Many will argue the first is the best here despite the 8" range of templates because it ignores the mediocre Ballistic Skill of the unit and is the cheapest to boot, though meltaguns do work well for a unit that cares little if it vacates a zooming Vendetta and dies in the process. Plasma Guns ride that line between being a bit too expensive to waste on a suicidal squad and having you care little if they overheat and kill the carrier. Ballistic Skill is irrelevant against overheating unless it exceeds five, though actually getting hits with between three and six shots does favour the more accurate unit considering the high cost of each weapon. For this reason and the ease with which a Special Weapons Squad can be tossed out of a zooming flyer to "Deep Strike" near a valuable target has me favouring the shorter ranged flamers and meltaguns with each obviously fulfilling the separate anti-infantry and anti-tank roles, respectively.

Sitting in a corner just daring you to purchase them are the entirely distinct demolition charges, one-use-only wargear that function much like a miniaturized Demolisher Cannon shell that has the incredible likelihood of annihilating its users. These are the most expensive option by far but undeniably the most terrifying for opponents using masses of infantry fitting any description, whether elite like Terminators or light such as Termagants. A Strength 8 AP2 large blast can eviscerate entire units at a time with ridiculous ease and a Special Weapons Squad packing in up to three of these can quickly make short work of a squad that is far more expensive than they - the Emperor preserve a large brood (or squad) of Tyranid Warriors or Paladins that faces these. Unfortunately, the pitiful 6" range of demolition charges pretty much forces you to use Deep Strike deployment options as otherwise the high cost of the weapons will have almost no guarantee of reaching the enemy lines safely seeing as any sane opponent will destroy them in short order.

On a less important but altogether humorous note, the 6" range of the large blast weapons coupled with the poor Ballistic Skill 3 of the Special Weapons Squad will see that so many games featuring these will result in the unit wiping itself out involuntarily. This isn't so important given that the unit is a one trick pony with one-use-only weapons and quickly becomes near useless after it has used the demolition charges - besides, one good hit on an enemy squad should make the Special Weapons Squads' points back immediately. Even if they fail to use them whether by not getting in range or being shot to death, the mere threat of demolition charges can also work in your favour by forcing your opponent to spread out and potentially leaving some units more vulnerable to your ground forces. The high cost, risk and limited range of demolition charges does make them the most risky investment for a Special Weapons Squad but ultimately they are an awesome and devastating option that deserves to be tested out at least once. Make sure the units' transport is nowhere near the potential blast radius!

Best Uses
Given that this unit will never match Veterans for reliability or versatility I think they are designed purely to provide an incredibly cheap source of either meltaguns or flamers, the former as a unit with those will cost the same as bare-bones Veterans and the latter because it ignores their mediocre Ballistic Skill. Vendettas are the prime transport option unless you can secure the Grand Strategist Warlord Trait that allows D3 units to Outflank, with the former employing Grav Chute Insertion or switching to Hover mode depending on the situation. Deep Striking out of a flyer is perfectly normal for a cheap suicidal unit while switching to Hover mode with a flyer as expensive as a Vendetta should only be done if you are sure your opponent won't have the means to dispose of or otherwise neuter it, such as preventing it from swapping back to Zoom mode.

Depending on the units' armament, melta weapons should be used to go for a more likely kill rather than a hail mary given the inaccuracy of three Ballistic Skill 3 shots, while flamers are best suited to kill Toughness 4 4+ armoured models or those with weaker defensive stats than that basic template. Still, do not underestimate the killing power of three well-placed templates even against Space Marines - managing to kill three or four Space Marines will be heavily luck dependent but will pay for the Special Weapons Squad instantly. If the squad actually manages to survive after it has delivered its initial payload then I recommend either seeking a new target to continue being an annoyance to your opponent - this unit is so inexpensive and just dares your opponent to waste quality shooting on them - or camping on or taking an objective. I really do recommend Vendettas or Valkyries for the latter reason especially as it allows you to drop a cheap throwaway unit onto an objective which could potentially give you a point in a Maelstrom of War mission, or even target an enemy corresponding to one of the Tactical Objectives.


Thank you everyone for taking the time to read my take on the somewhat unwieldy Special Weapons Squad. They are a blunt instrument with the gear necessary to recreate the magic of Veterans at a slightly lower cost, but they sacrifice bodies and potential staying power as a trade-off. I hope you found this article useful to your endeavors as a player for or against the rechristened Imperial Guard and please have yourselves a lovely day!
at 8:37 pm