Hello there everyone, I am Learn2Eel from Imperator Guides and I welcome you to my latest Unit Overview series reviewing the ancient guardians of Lustria, the Lizardmen (and Lizardwomen?). This is an army with a lot of variety in play-styles, whether by relying on driving enemies back through masses of hardened Saurus, crushing them under the scales of titanic Stegadons or ambushing them with a thousand poisoned darts from a writhing swarm of Skinks. Even if you are a mighty Oldblood far removed from the mute inexperience of a new spawnling, I hope there is still something useful for you here in this series. Enjoy!

Carnosaur - This is quite honestly the one unit I expected the rules designers to fix with the newest Lizardmen army book, but sadly they barely changed it at all and left its rules in a bit of a mess, relegating the great beast to be implemented into army lists in a way that most certainly doesn't fit their background. Before I explain how this can be used in a competitive environment, let us first compare the Carnosaur to the Kharibdyss, the all-new monster introduced in the most recent update for Dark Elves. A Kharibdyss has an impressive Weapon Skill 5 as opposed to the Carnosaur's Weapon Skill 3, meaning that unless it suffers from a to-hit modifier it will never need worse than a 4+ to hit an enemy unit in close combat and will hit the majority of other monsters in the game on a 3+. Both share the exact same Strength, Toughness, Wounds and Scaly Skin armour save of a 4+. Both cause Terror and are Large Targets, while the Carnosaur has Movement 7 whereas the Kharibdyss has an ever so slightly lower Movement 6 - a Carnosaur can march up to 14" while a Kharibdyss can march up to 12". A Kharibdyss has five base attacks and the Poisoned Attacks special rule, making it quite a bit more reliable in terms of not having to worry about rolling 1s to-wound and not having to roll to wound against things like Warsphinxes that have a crazy Toughness 8. On the other hand, a Carnosaur has four attacks base with the potential to go up to five attacks, the latter being dependent on the Carnosaur causing at least one unsaved wound in any close combat.

As for pure monster-hunting capabilities, a Kharibdyss gains an additional D6 automatic Strength 7 hits against any single model that is hit by all five of its regular attacks, whereas the Carnosaur inflicts Multiple Wounds (D3) on all of its attacks. It is also important to note that a Kharibdyss is Initiative 4 rather than sharing the abysmally low Initiative 2 of the Carnosaur. When you crunch the numbers against all manner of monstrous or multiple-wound opponents that both monsters are clearly intended to fight, the Kharibdyss usually ends up being the victor - being Weapon Skill 5 and Initiative 4 are huge advantages to have for any monster. This allows the Kharibdyss to hit enemy monsters on 3s and often strike first as well, whereas a Carnosaur will struggle to hit other monsters - let alone Weapon Skill 7 or higher models - and suffers by often going last in a direct combat. Considering that Toughness 5, 5 Wounds and a 4+ armour save really aren't great defensive stats as far as monsters are concerned, this is a pretty significant deficiency that one could say is outweighed by its damage output. For average damage output the two are pretty evenly matched with the Kharibdyss hitting more often with the chance for an extra D6 Strength 7 hits as well as usually getting to strike before it dies and easily beating the Carnosaur against models with one wound each, whereas a Carnosaur hits harder against models with multiple wounds but is a bit more reliant on augment spells to guarantee it doesn't stuff up its rolls.

One also shouldn't forget that a Kharibdyss comes stock with the Abyssal Howl special rule, forcing enemy units in base contact with it to re-roll all successful Leadership tests - effectively cancelling out the Hold Your Ground special rule from a Battle Standard Bearer - unless the majority of models in the unit have one or more of the Fear, Terror and Immune to Psychology special rules. This is a very handy ability for a monster that will often be used to flank-charge infantry regiments and can lead to many games won based on your opponent basically being unable to benefit from a Battle Standard Bearer - if you are forced to re-roll both passes and failures then the effects are considered to cancel each other you - which can make such a huge difference for an aggressive army like Dark Elves. The Carnosaur can purchase a similar kind of ability in principle, but it does not come with it stock. As two similar monsters with identical survivability and similar damage output with the Kharibdyss having a useful Leadership-based ability, you would expect the two monsters to be priced roughly the same with perhaps the Carnosaur being either ten points more or less than a Kharibdyss? Unfortunately, that's just the thing - while a Kharibdyss is well priced and occupies a Rare slot, a Carnosaur is a good fifty points more than a Kharibdyss and is exclusively a mount option. Not only is the Carnosaur far more expensive than it should be individually but it must also be forced to take a rider that adds to the cost of the model considerably, while the rules for ridden monsters in 8th Edition remain as unappealing as they always have been.

What exactly does the Carnosaur get to make up for this deficiency compared to a Kharibdyss, one might ask? Nothing, honestly, unless you count how valuable the actual rider is. Here's where the competitive usage of the Carnosaur pops up, and it isn't really suitable when you consider the background of the beast - though I guess in a strange way it also makes sense given how terrifying a Tyrannosaurus Rex equivalent should be. Here's the expert tip; take the Bloodroar upgrade and possibly the Swiftstride upgrade if you can afford it. Forcing opponents to roll 3D6, discarding the lowest result, to resolve Fear and Terror tests seems minimal at first but when you consider that this is a beast capable of declaring turn one charges - especially when provided Vanguard by a certain Skink character - you will soon start to see its impressive value. Flanking units will often flee off the board provided they are out of range of both their General's Inspiring Presence and the army Battle Standard Bearer, while even front-line units will often be susceptible to the Panic test caused by Terror. Still, these uses are limited when you consider how many Immune to Psychology combat units there are nowadays, as well as Leadership 10 Generals with nearby Battle Standard Bearers. The fact that the Carnosaur is at least 50 points too expensive for what it does and is restricted to being a ridden monster makes it a sub-par choice at best, even if it does have some nice but often situational uses from its Bloodroar upgrade.
Competitive? No. 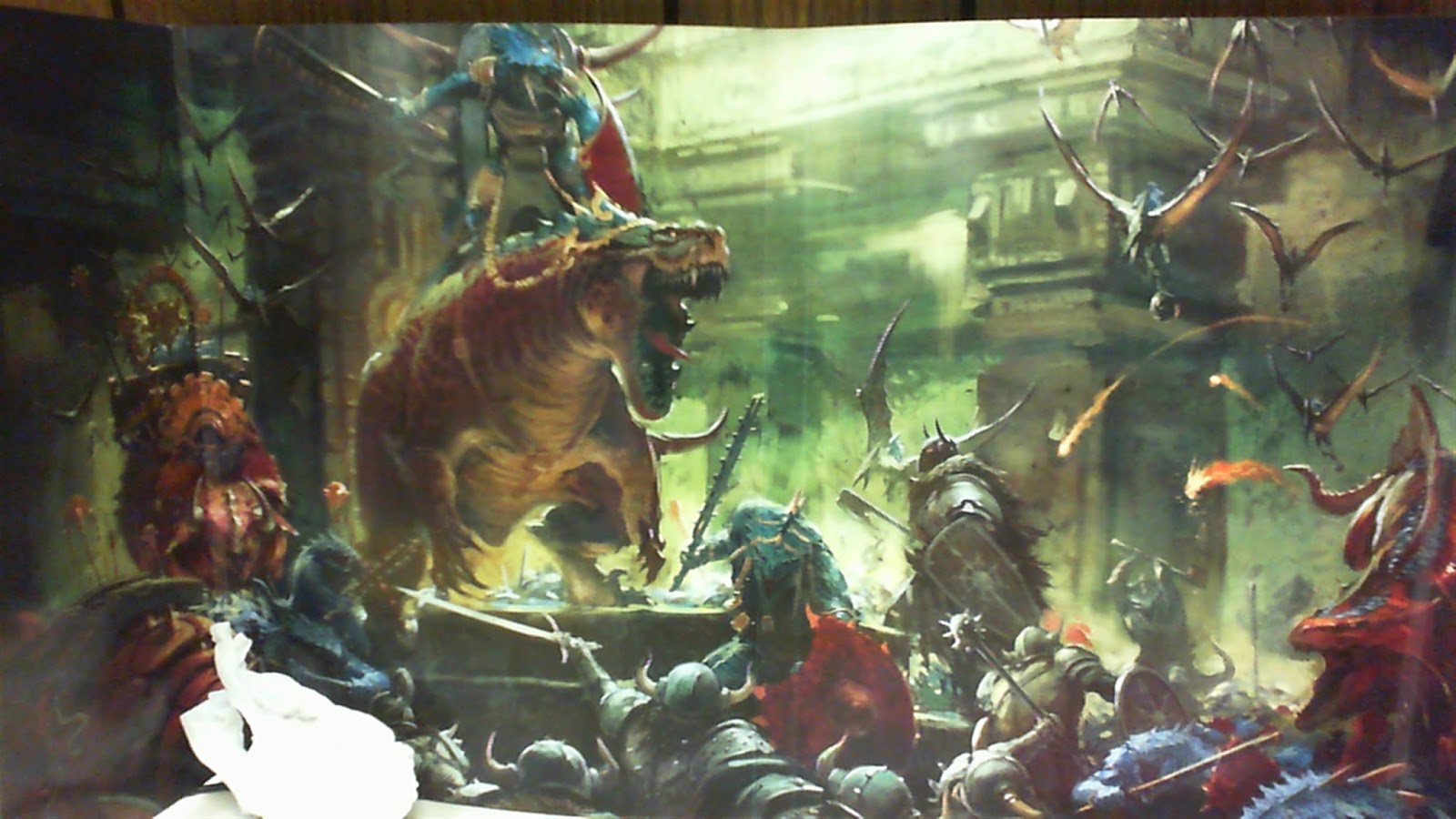 Cold One - Seeing as this is your only actual cavalry mount throughout the entire army book, the Cold One may as well be the staple of the Lizardmen mount options. These are identical in every way to their Dark Elf counter-parts (except for the models, such a shame) in terms of pricing and stats; if you read my Dark Elf reviews then you will know that Cold Ones are very impressive heavy cavalry mounts. This is because unlike the majority of horses in the game, Cold Ones are actually capable of doing a lot of damage themselves, providing two Strength 4 attacks at Weapon Skill 3 and Initiative 2. While these attacks don't benefit from any special rules, they really help out heavy cavalry with one of their huge issues by cutting through rank and file models with far greater speed than other heavy cavalry units. It causes Fear but comes with the cursed Stupidity special rule, though this can be seen as a mixed blessing; units that suffer from Stupidity are also Immune to Psychology as a result, meaning your Lizardmen ground cavalry models or units will never worry about Panic, Terror and Fear tests ever again. Considering all models riding Cold Ones are Leadership 8 with the Cold-Blooded special rule at minimum, this really isn't a bad deal at all whether it be for a Hero or Lord riding one or the actual Cold One Cavalry. Other than these traits, the Cold One offers your usual "barded warhorse" traits; Movement 7 and a +2 bonus to the armour save of the rider. Not only are these integral to all "cowboy" builds that are infamous among competitive Lizardmen armies, but they are generally just well-priced mount options that make all those armies using regular horses very jealous indeed.
Competitive? Yes.


Terradon - As a Monstrous Beast, a Skink Chief riding one of these is treated as a Monstrous Cavalry model for all intents and purposes - however, as the Terradon has identical Toughness and Wounds to a Skink Chief (its' only rider option) this is practically a moot point. I still need to mention that however because of the Special unit consisting of entire regiments of these; the Terradon Riders. A Skink Chief on a Terradon is priced at just over double the cost of two Terradon Riders but offers identical survivability before any upgrades are considered, and the damage output just barely favours the Chief. Two Toughness 3 Wounds with incredibly minimal armour saves on a flying cavalry model (meaning a Chief riding one of these cannot join flying units) that has bare damage output at best really doesn't have a strong place in a Lizardmen army considering there are Scar-Veteran Cowboys in the same slot. If a character mounted on a Terradon could join units of Terradon Riders, this would be a decent mount option; it is limited because the mount itself is over-priced for a Hero character that receives no benefit from the Monstrous Cavalry classification.
Competitive? No.


Ripperdactyl - The more expensive of the two flying mounts available to a Skink Chief, a Ripperdactyl offers all the same issues as a Terradon but trades dropping rocks for heavily increased combat potential. This is probably the one you should use as a Skink Chief with a spear, light armour and shield mounted on one will have a 3+ combined armour save and offer three Strength 5 plus three Strength 4 Armour Piercing attacks on the charge, the latter trio also with the potential for Killing Blow. That's not bad for a shade under 90 points when you consider that a pair of Ripperdactyl Riders in the Special slot will instead have two regular Strength 4 attacks plus six Strength 4 Armour Piercing attacks that have Killing Blow. Sadly, the same problem of survivability rears its ugly head - especially when the model is Frenzied and has a pathetic Leadership 6, a value where Cold-Blooded really can only do so much.
Competitive? No.


Thank you all for reading this entry in my Lizardmen Unit Overview series! This set of mini-reviews is intended to act as a brief introduction to each unit and army special rule in the Lizardmen army book, providing some insights into how they function competitively without going into nearly as much length as my proper Tactica articles. Even if you aren't a fan of Lizardmen, I hope you can find something useful from this series for use in your games either employing or fighting against the warriors of Lustria! Don't forget to have a nice day and please leave any feedback you have in the comments section below - all critiques are appreciated!
at 9:00 pm