Greetings fellow greenskins and welcome to my latest zoggin' entry in the Ork Tactica series! My appreciation for support characters in Warhammer 40,000 is likely infamous by now, and it thus comes as no surprise that I am a big fan of the craziest of all Painboys - Mad Dok Grotsnik. Reading about this hilarious characters' exploits is always enjoyable and his in-game capabilities are more than acceptable given his background. I hope you enjoy this article! 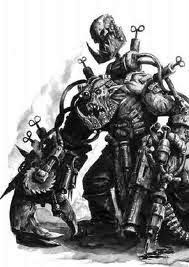 Of the various unique characters in the Ork Codex that occupy a HQ slot, Mad Dok Grotsnik is the most expensive by a considerable margin and that isn't exactly a bad thing when you consider how cheap most units in the Ork army are anyway. The Mad Dok has a profile more in line with a Warboss rather than the Painboys he clearly emulates, having a nice Toughness 5 with three wounds, four attacks at a base Strength 4, Weapon Skill 5 and Initiative 3, as well as a good but not great Leadership 9. He lacks the Waaagh! special rule typical of a Warboss but instead brings the Dok's Tools and 'Urty Syringe upgrades to the table, providing his unit with the super important Feel No Pain (5+) special rule as well as benefiting from Poisoned Attacks. Of course, the 'Urty Syringe will usually be left alone in favour of the Mad Dok's Power Klaw which strikes at Strength 8 usually, but due to Furious Charge it will be resolved at Strength 9 on the charge. Combine this with his Brutal but Kunnin' Warlord Trait and Grotsnik is a decently nasty melee character - in line with a Warboss kitted out with a Power Klaw - considering he also comes with a free re-roll to one to hit or to wound roll each turn. He is also quite survivable with a 4+ armour save, a rather pointless Cybork Body upgrade and that juicy Feel No Pain roll which won't be ignored often on a Toughness 5 model.

Of course, the main reason you want Grotsnik aside from providing a more survivable Painboy with some nice damage output is his exclusive One Scalpel Short of a Medpack special rule, providing both himself and any unit he joins with the Fearless and Rampage special rules. While your standard Ork horde will generally outnumber most opponents even after accounting for all the casualties they will suffer from concentrated shooting, providing this buff to Nobs or Mega Nobs gives them a potentially massive increase in overall damage output, while the Mad Dok himself becomes potentially  even more frightening than a Warboss in melee. The most valuable part of this special rule by far however is the Fearless special rule, meaning whatever Ork unit he joins will ignore all of the downsides the new Mob Rule chart offers while never fleeing for any reason. While attaching him to Nobs or Mega Nobs will still be one of the more common builds because they are more likely to benefit from Rampage, giving Fearless to any Ork unit of your choice can help your forces out so much - if you want to ensure a unit with your various supporting characters is both difficult to shift and impossible to break, the Mad Dok is your primary outlet. The only downside to One Scalpel Short of a Medpack is that it forces Grotsnik to stick with a unit until the unit is destroyed, but generally speaking it is rare for a Painboy-type character to switch spots anyway - especially if they are mounted up in transports. When you weigh his profile and equipment against that of a Warboss and Painboy while accounting for his unique special rule, Mad Dok Grotsnik makes for a fine HQ choice that provides you with a good all-rounder that - like most Orky things - just barely exceeds the one hundred and fifty point mark. 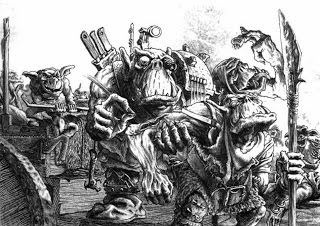 Stick Grotsnik in a unit you feel will draw either the most attention from your opponent or you just want to protect above all others. If you just want the Feel No Pain buff then a standard Painboy would be preferable to Grotsnik simply because you can afford three of those in place of the Mad Dok. If your forces are mostly ferried by Trukks, Battlewagons and so on or mounted on Bikes then there may be little reason to spend the extra points on Fearless. However, if you want a hard-as-nails unit that will never run away and smash almost anything it meets in combat, there is no better character to add to it than Mad Dok Grotsnik - applying Fearless to a horde unit is amusing, though I feel it is best used to ensure your high value melee units don't end up fighting among themselves due to the Mob Rule special rule. Grotsnik makes for a nasty character assassin with a wealth of Strength 8 (Strength 9 on the charge) AP2 Unwieldy attacks and some pretty decent survivability, but just be aware that (in the same vein as a Warboss) he can't really compare to the high-tier melee monsters such as a Chapter Master.


Thank you for taking the time to read this article; I hope it proved useful to you as either an aspiring leader of a great Waaagh! or a staunch competitor looking to stem the greenskin tide. I am glad to see the Mad Dok given some nice rules in the latest Ork codex, even if his high cost means one could feasibly purchase three Painboys and still have points to spare provided they skip Grotsnik. Regardless, I am eager to hear your thoughts on the unique Painboy character; additionally, if you have any feedback for me then please leave them in the comments section below! Thanks again!
at 7:29 pm