Greetings my fellow war-gamers and welcome to my latest entry in the Ork Tactica series! I am pleased to highlight one of the most hilarious Ork characters ever conceived, the Weirdboy, a cheap psyker option that, while limited in terms of psychic powers to choose from, provides some very impressive augmentative abilities to his or her fellow Ork Boyz'. I hope you find this article to be useful to your endeavours to smash some heads and lead an awesome Waaagh! 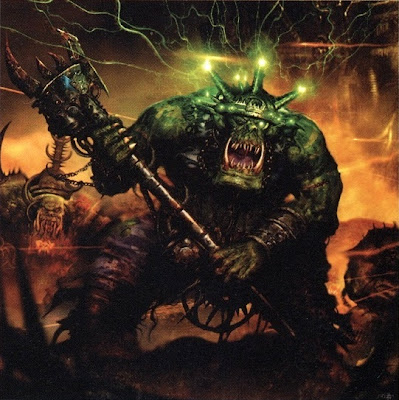 As the only Orks capable of manifesting their latent psychic abilities, Weirdboys function as cheap damage-dealing psykers with less of an eye towards supporting your force so much as just giving you some extra, potentially even more unreliable ranged capabilities. The Daemonology disciplines are undeniably risky but nonetheless worthwhile for a very cheap psyker that can generate extra warp charge points quite easily, favouring Malefic Daemonology in particular - if green is best then surely some Nurgle Daemon reinforcements would prove useful? It helps that the native Ork psychic discipline is actually quite decent, even if all but one of the powers are completely reliant on the practitioner getting in close proximity to the enemy; of course, this isn't really an issue or break in tradition with regards to Orks. For a psyker as cheap as a Weirdboy, the profile is about what you would expect in keeping with the fact that he is still a hulking greenskin; Strength and Toughness 4 with two wounds is typical of most Librarian equivalents, while three attacks base at Initiative 3 makes for roughly average melee capabilities for such characters. Weapon Skill 4 and Ballistic Skill 2 solidify the Weirdboy's spot as a mostly generic fighter in an Ork army, while a 6+ armour save means that he is also painfully easy to kill once exposed from the rest of a mob.

Of course, a lovely suite of special rules helps to make the Weirdboy a valuable choice in most engagements with Furious Charge, the usual re-roll of one dice when working out charge ranges, the ability to join units as an Independent Character and the obvious Psyker specification. Furious Charge and what amounts to an Orky Force Staff combine to give a Weirdboy some hefty damage capabilities in a melee - namely four Strength 7 AP4 attacks on the charge with the Force special rule - on top of the nasty witchfire powers the Power of the Waaagh! psychic discipline offers. The lack of psykers other than Weirdboys in the codex does mean generating enough warp charge points to overcome the psychic defenses offered by Grey Knights or Tzeentch Daemons can be a serious issue, but even just getting off one witchfire and making it into a melee will usually see the Weirdboy "make his points back" in short order. This is helped by the fact that any Weirdboy can generate an additional warp charge point on top of what the usual D6 roll and their mastery level would allow via the Waaagh! Energy special rule, providing the bonus point if there are ten or more Orks (essentially) within 12" of them at the start of the Psychic Phase. It is a neat little addition that helps to increase the value of the character and means they will actually have far less difficulty in successfully casting their powers.

The lack of real support abilities means a Weirdboy is restricted to being a damage dealer which he is surprisingly good at despite how inexpensive he is, though obviously an army like Orks doesn't generally have issues with maximising their damage output in melee but rather wants defensive counter-measures against the ranged presence offered by the other hard-hitting competitive armies. In this regard a Weirdboy definitely falls short, but if you have the points spare and feel confident in your chances to roll up some of the more amusing psychic powers such as Da Jump, a Weirdboy is by no means a bad choice. At the very least, the Weirdboy will always have Psychic Focus and as such will have one more power than his actual Mastery Level in each game you use one; while this isn't specifically an advantage over other psykers, it helps to make Weirdboys more valuable than they might seem at first glance.

This largely depends on what psychic powers your Weirdboy ends up with as they can have a legitimate effect on how you deploy or otherwise put the Weirdboy to good use. Da Jump can be hilarious in conjunction with almost any Ork unit, but particularly with a horde of Shoota Boyz provided there is some space in the midfield to safely deep strike forward. The units you traditionally don't want to teleport are the Mek Gun and Loota squads, but moving them away from - for example - an "all-assault" or null deployment type army that hogs your deployment zone by turn two or three at the latest can be amusing. Da Jump is so versatile and useful in 7th Edition seeing as you can use it to jump on new objectives or prey on specific targets to satisfy any Tactical Objectives that you might have currently active. The Waaagh! Energy special rule is also a consideration seeing as your average Ork unit should consist of at least ten to twelve models dependent on whether they are based in a transport or running up on foot, though obviously the Weirdboy can't benefit from it if he is garrisoned in a transport or building. Generally speaking, however, the short range of each psychic ability in the Power of the Waaagh! discipline means you really need to have a transport ready for the Weirdboy in case Da Jump isn't rolled up, especially as the Blessings available are all melee-oriented. It helps that the Weirdboy is a pretty nasty combat competitor in his own right, so making the most of that with either a foot-slogging horde "bubble-wrap" or anything from a Trukk to a Morkanaut is ideal. Just be aware that a Weirdboy is pitifully easy to kill with only two Toughness 4 wounds and a pathetic 6+ armour save as his only defensive wargear, meaning you need to make full use of Look Out Sir and positioning him towards the back or middle of a unit to reduce potential saves forced on him.

Seeing as there are only two possible builds for a Weirdboy based on how many Psychic Mastery Levels you want him to have, I'll only list the one build I favour of the two.


While I agree with the general sentiment that a Weirdboy is a bit limited in terms of psychic potential because of the restricted access to only three psychic disciplines - if you split Daemonology into two separate lores, otherwise I refer to them as one - I nonetheless am a strong believer that they are very well priced for what they do and have access to some very useful powers in their native lore. Orks are one of the few 7th Edition armies that can pull off close combat well due to inexpensive, appropriately priced melee units that rely on numbers over sheer quality as well as the many various special rules that give them suitable boosts to ensure they can get into a right proper scrap. Provided you actually want to use the native Ork lore, the number of close-ranged witchfire powers and melee-oriented blessings are sure to be of great use to an army that traditionally feels right at home in the thickest close combats possible. With that in mind, what are your thoughts on the Ork Weirdboy and if you have had the pleasure of fighting with or against one, how have they performed in your battles? Additionally, please feel free to leave any feedback you have for me in the comments section below - I appreciate it greatly! Thank you and have a lovely day - just be sure to smash some 'eads for me in the process!
at 8:29 pm