Greetings all and welcome to the latest entry in my Orks Tactica series, this time focusing on the walking death machines known as Killa Kanz. I hope you enjoy the article! 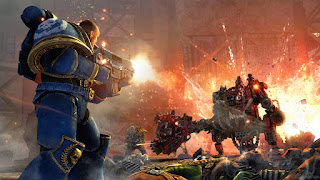 Fondly known as the little mechanical rodents that could, Killa Kanz are grot-crewed miniature (ha) imitations of the Ork Deff Dread that are wildly different both with regards to their basic profile and one crucial distinction that serves to give both a place in greenskin army lists. A quick look at the Kan profile reveals a vehicle with an unimpressive stat-line and not much to offer in either the Shooting or Assault phases, so much so that they seem rather poor by comparison to the larger Deff Dreads despite being quite a bit less costly. With AV 11/11/10 and two hull points, a single Killa Kan is incredibly easy to destroy and doesn't offer the same mobility as vehicles with similar durability such as Piranhas or Land Speeders, moving only a meager 6" per turn in the Movement phase. Put simply, Krak Grenades and Scatter Lasers will tear these apart both up close and from afar with little difficulty, and most other weapons will be capable of doing so besides. Weapon Skill 2 supplements a core of two Strength 7 AP2 attacks resolved at the Initiative 2 step, meaning it can't threaten heavy targets such as other Walkers, Land Raiders or high Toughness Monstrous Creatures like a Deff Dread can, while also importantly precluding it from inflicting Instant Death on the increasingly common Toughness 5 multiple-wound squads. However, those Strength 7 AP2 attacks will still tear through most units given that they can't harm the Killa Kanz in return, so units that only have Strength 4 attacks or a handful of higher Strength attacks could struggle to harm the Kanz while suffering significant damage in return. As an example, even Terminators aren't safe from them - while Initiative 2 is pretty bad for any kind of assault unit, it does strike before Unwieldy enemies and thus gives Killa Kanz an edge over a lot of 2+ armored models armed with heavy melee weapons.

In ranged combat, the Killa Kan isn't that much more impressive either at first glance; a mediocre Ballistic Skill 3 value is supplemented by a single Big Shoota, though the real value comes in the optional upgrades - the most notable of which is the humble blast-spewing Grotzooka. Rounding out the profile of a Killa Kan is the potentially debilitating Cowardly Grots special rule that essentially forces the Kanz to take "morale" tests for suffering casualties in any given phase provided it matches or exceeds 25% of their starting squadron size. Manifesting as a single D6, the roll is passed on a 3+ with two separate +1 modifiers coming from having a Deff Dread within 6" of the Killa Kanz or the unit itself possessing three or more models when it takes the test at the end of a phase. If the final result is a 3+ after accounting for any modifiers, the unit is fine, but if it fails, each Killa Kan in the unit is forced to Snap Fire until their next Shooting phase as per the Crew Shaken rules with the minor note of not also losing hull points. Because I don't have a better segue into the last point, the fact that Kanz can take pseudo morale tests for suffering casualties should indicate that they can be fielded in squadrons - this is the aforementioned trait that distinguishes them from Deff Dreads and it is the only reason that you might see them used instead of their larger cousins. A single Killa Kan is worse than a Deff Dread at surviving and dealing damage in almost all cases even with the points gap in mind, but a squadron of Kanz offers a different perspective on the unit. Up to six of the miniature Walkers can be capable of far more than any single Deff Dread in more aspects than just raw damage dealing; they are more likely to get across the field without conceding First Blood all the while forcing opponents to focus them down at the expense of dealing with other valuable targets. To summarize, Killa Kanz are individually weak and ineffective models that will do little to aid your war effort, but in groups they can actually pull of some notable accomplishments and complement a mechanized Ork list fairly well.

Regardless of how you decide to outfit your Killa Kanz, there are a few constants to keep in mind; they will have one ranged weapon and one melee weapon, as opposed to running two of either like their larger Deff Dread kin. Additionally, they will always have the Kan Klaw to provide them with Strength 7 AP2 melee attacks and as such can do some some real damage in an assault regardless of what gun you decide to outfit them with. On that note, there are five shooting tools of destruction for you to choose from and each of them has a different purpose. The Big Shoota and Rokkit Launcha are the two "free" choices with the latter being superior on a Ballistic Skill 3 platform for the extra Strength 8 AP3 shots as opposed to the highly unreliable Ballistic Skill 2 Deff Dread, though realistically either weapon is fine for saving points. Grotzookas are the best all-round addition to Killa Kanz because they aren't too dependent on a mediocre Ballistic Skill and will eat through most medium to low Toughness models with little difficulty while also posing a threat to light vehicles. Kustom Mega-Blastas are as bad of a choice for Killa Kanz as they are for Deff Dreads; despite the former being more accurate, it has even less hull points to risk losing than the latter. Skorchas are the most potent at close ranges, but unlike the Deff Dread it actually has good competition for its role with the Grotzooka - the main difference being that Skorchas have Ignores Cover whereas the Grotzookas have the range and average hits advantage in most cases. I would avoid both of the generic vehicle wargear upgrades as they are even less valuable on such a fragile model than on the Deff Dread; stick to either the Big Shoota or Rokkit Launcha if you want to save points, or give the Kanz some Grotzookas for short to medium ranged infantry suppression - they aren't quite as excited about being close to enemies as Deff Dreads given that they are hilariously vulnerable to many close ranged attacks such as Krak Grenades. 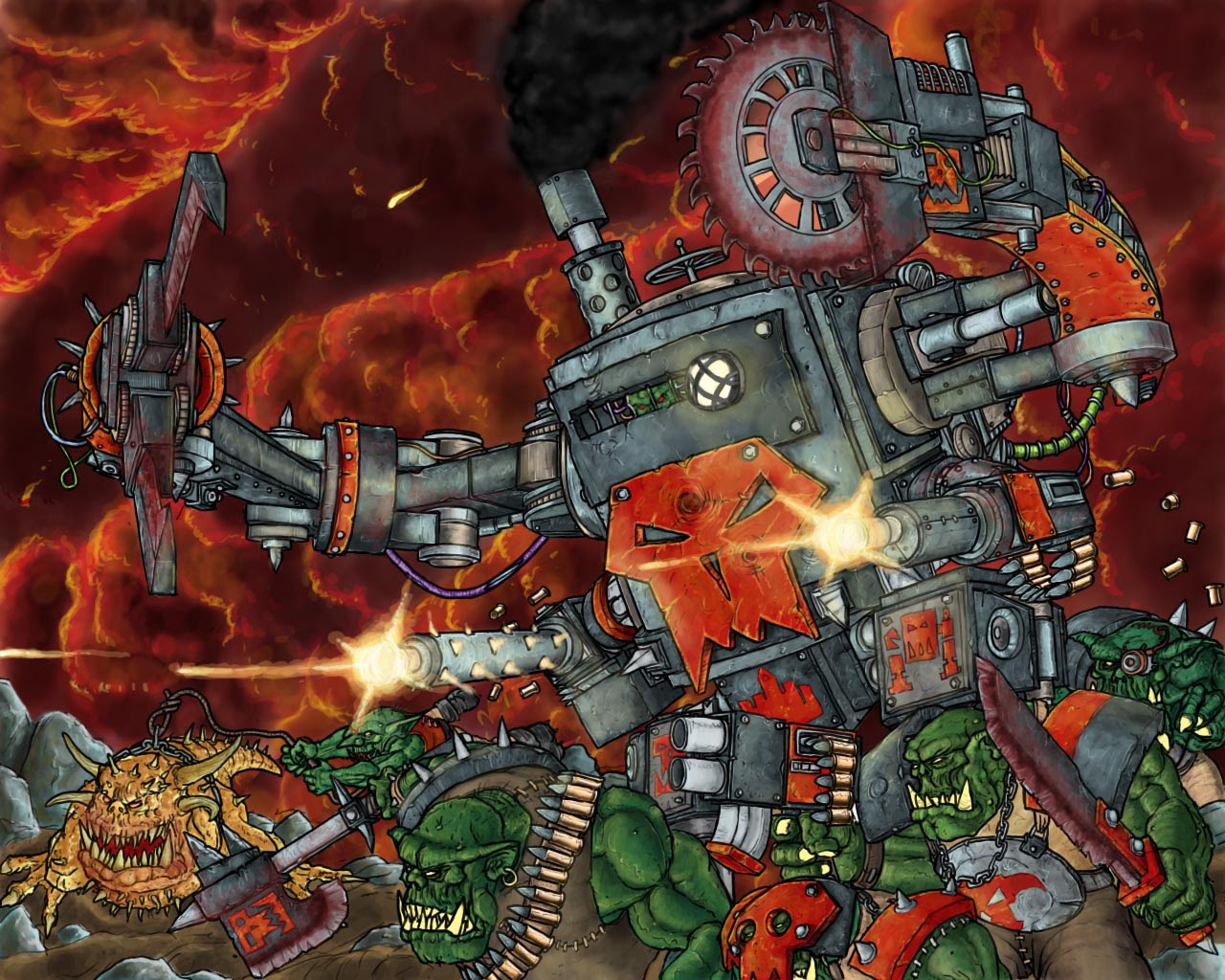 I prefer to use Killa Kanz as mobile cover for other Ork forces - including Deff Dreads - as they are still sizable models despite their status as lesser Walkers, though you can alternatively use cheap Boyz to protect the Kanz instead depending on which unit you feel will be most useful in a given match-up. In a melee, Kanz are adept at destroying vehicles with rear armor values of ten or eleven, while they can also be used against anything with an armor save that doesn't have lots of Strength 6 or higher attacks to strike back at them. An example would be the almost unseen Terminators with Lightning Claws, but don't get cocky with them; a squad of ten Tactical Marines using only Krak Grenades against three charging Killa Kanz will, assuming average rolls, emerge victorious over the Orks after three or four rounds of combat. To complement their unusual close combat prowess, Grotzookas are a popular choice as they can be used from afar to blast through a wide range of units and be relied upon if you don't want to close in against certain armies. As much as the Cowardly Grots special rule penalizes squadrons of Killa Kanz, a single one of these is actually less points efficient than a Deff Dread in almost every category imaginable; as a result, use them exclusively in squadrons of three or more, with four to five being ideal for the bonus to the "morale" test - be sure to keep a Deff Dread nearby as well. Against an unprepared foe, a squadron of these can maul entire units at a time with little difficulty and be highly resistant to total annihilation, while their small size means gaining cover saves will often come at no cost to their speed due to intervening terrain.

Here are a selection of builds I heartily recommend for Killa Kanz;

Killa Kanz (6) w/ Grotzookas - This is your "all-in" build for the grot-crewed monstrosities, outputting twelve Strength 6 AP5 small blasts at 18" (usually enough to destroy Rhino equivalents and most of a Space Marine squad in one go) and eighteen Strength 7 AP2 melee attacks on the charge, with the numbers to survive under duress.

Killa Kanz (3) w/ Rokkit Launchas - This should be the bare minimum you use for a Killa Kanz squad, it provides mediocre anti-tank shooting and close combat capabilities but is fairly cheap for what the squadron is capable of in the right situations.


Thank you all for reading this article, I hope you enjoyed it! Killa Kanz are a rather funky unit, and while I generally don't recommend using them in strictly competitive matches, they can be amusingly deadly given the right circumstances. I would appreciate any feedback you have for me and will deign to reply to any comments you leave regarding the Killa Kanz as soon as possible. Thanks again!
at 6:45 pm