Hey guys, Learn2Eel here with another look (not literally though!) at the new Tyranids and some of the rules leaks we are seeing. This time, I'm going to be looking at a rumour set that was sent into Naftka over on Faeit 212 (check it out, he's an awesome blogger!) and has spread around the Internet, including on +Bell of Lost Souls. Without further ado, here are my thoughts on the "Apex Biomorphs" - and by the by, I hope that is indeed what they are referred to as in the new codex!


Before I start, here is a link to the original article posted by Naftka on his blog. I'll cover the basics here;

1) The Apex Biomorphs function similarly to Relics from other codices, such as the Grimoire of True Names from Chaos Daemons or the Shield Eternal from Space Marines. This means that you can only take one of each per detachment.

2) The first Biomorph is a special form of Synapse. It reduces the Synapse range of the creature - probably by 6" - but grants both itself and any other Tyranids (no word on whether it is units or models) in that special Synapse range the Eternal Warrior special rule.

3) The second Biomorph is a pair of AP2 Boneswords (which means that regular Boneswords are indeed dropping back to AP3 as expected) that, for every wound inflicted by them, restore a single lost wound on a further D6 roll of a 5+.

4) The third Biomorph is a 'Virus Barrage' that is probably the Tyranid equivalent of an Orbital Bombardment fired from the orbiting Hive Fleet. It is Ordnance, Poisoned (+3), has unlimited range, is a one-use-only weapon, and the "template" remains where it lands.

5) The fourth Biomorph is a "flamer" available only to Hive Tyrants and Tervigons (i.e. the HQ monstrous creatures), and is apparently AP3.

6) The fifth Biomorph is a carapace that provides a 3+ armour save that increases to 2+ and grants Eternal Warrior if the model does not Run or 'Glide'. I presume this is instead referring to doing a 'Run' move when Swooping as a Flying Monstrous Creature. 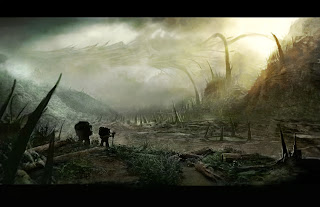 Now, let me analyze some of the crazy potential available here and why I personally hope this rumour set is true - and by the by, I actually think it is very much legitimate as nothing seems outlandish here!

1) The Synapse Biomorph - This is the one that I can see being the most highly sought after, especially if the points cost is equal to or below the 50 point mark. This Biomorph given to a Tyranid Prime or a Flying Hive Tyrant can single-handily make Warrior and Ravener/Shrike-dominated lists competitive, respectively. It solves the biggest issue everyone has with the current iterations of those units and, as we know Warriors have not themselves changes much, this could be the key to making lists featuring big units of those viable. I can only imagine the horror on an Imperial Guard player's face when their battle cannons only manage to kill one Ravener or Shrike through wounds caused rather than Instant Death! Now, the big question is whether this affects units or models in the range, and if it stacks up with the extend-Synapse psychic power Dominion. If it affects unit in range and can be boosted by Dominion, this will be an absolutely amazing Apex Biomorph.

2) The Boneswords Biomorph - Whether or not this "life-steal" rule makes its way to regular Boneswords in some fashion, replacing the "Leadership test or Instant Death" function of the past, remains to be seen. Regardless, these sound like a nifty pair of weapons for a Tyranid Prime especially. The AP2 and regrowing wounds on a model that, if the stats don't change, already has Toughness 5 will be pretty darn impressive. Combine these with the 2+ armour Carapace and this could lead to one heck of a durable killer depending on the cost. Hopefully they will be around the 25 point mark or lower.

3) The Virus Bomb Biomorph - This is really interesting in both rules and fluff. Fluff-wise, it could represent Biovores or other Tyranid artillery making an "off-shore" bombardment, or even a Hive Ship - or the Hive Fleet - unloading a mass of spore mines onto the battlefield. If it functions like Orbital Bombardment, it should be pretty cool for a monstrous creature due to Relentless. Rules-wise, I am very interested to see if it has a Strength value at all. As an Ordnance Barrage weapon, always hitting the side armour and rolling 2D6 choose the highest for armour penetration is quite useful even on a lowly Strength 6 weapon. However, I can see this lacking a Strength value to only be useful against infantry; it would have the Ordnance rule to preclude the user from firing any other weapons. The AP of it will likely be 4, but if it is 2 or 3, it could be pretty devastating if the template 'stays'; I can see this being used primarily to lock down an objective more than anything else. This would fit into the general Tyranid style of play by dominating the midfield and forcing the opponent to move up out of their deployment zone. In fact, if it is costed decently, it could be a near-mandatory upgrade for this reason alone! Given that a Chapter Master is about a 40 point upgrade on a Captain nowadays, plus the stat boosts, I'm hoping to see this Biomorph at around the 20-30 point mark.

4) The Flamer Biomorph - We don't know much about this, but if I had to hazard a guess from Tyranids being one of the first armies to implement a 'Torrent' template weapon way back in 5th Edition (or perhaps the first?), this will likely be a Strength 4 AP3 Torrent Template like the Burning Brand of Skalathrax. Of course, I can't see Tyranids getting an exact replica of that, so perhaps a Strength 5 template weapon with a higher cost, or even no Torrent at all? We know too little to really comment, but given that Tyranids are generally reliant on winning the objectives game due to their lack of strong shooting, this could be an awesome objective-clearer for a Flying Hive Tyrant. If this is of similar capabilities to the Burning Brand, expect it to be around the 30-40 point mark.

5) The Armour Biomorph - Conferring a 3+ armour save obviously isn't any help at all given that all of our current generic HQs have a 3+ armour save, even the Tyranid Prime - though of course this could change in the new codex. That it only works when the model runs or "glides" - again, I bet this is referring to a flying monster 'running' - is thankfully not much of a restriction. The 2+ armour save is also odd given that currently Hive Tyrants can take Armoured Shell for a 2+ armour save anyway, but it of course can be taken by a Tervigon or a Tyranid Prime - the latter in particular could become a right pain for enemies hoping to slay Warriors with missile launchers. The really interesting tid-bit, of course, is Eternal Warrior. Given that, when combined with Warriors and Raveners at least, you would more be wanting to give all of them Eternal Warrior, that Synapse Biomorph would be more valuable. This is why I expect the carapace to be quite a bit cheaper than that Synapse biomorph. Besides, giving this to any HQ is downright disgusting, but especially so on a Tyranid Prime. Why? T5, W3, 2+, Eternal Warrior. Enjoy trying to get past it, Strength 8 AP3! My Warriors can watch you burn in hell! Given how I would price the Synapse Biomorph, I hope this is around the 30 point mark. After all, Space Marines pay not too much more for the Shield Eternal that instead confers a 3+ invulnerable save! 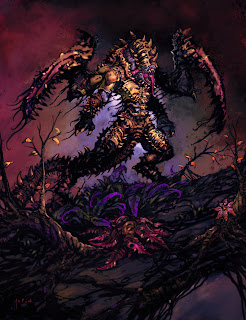 I'm very excited for Tyranids, and I just had to post my thoughts on these Biomorphs. If you have your own thoughts on them, and on Tyranids in general, be sure to share them in the comments section below! I am just itching for news on my favourite xenos army. I hope you have a great day!
at 8:51 pm