Howdy there my fellow greenskins and welcome to another addition in my Ork Tactica series! Today I'll be homing in on the awesome Battlewagons, some of the most iconic and frightening transports to face in Warhammer 40,000. I hope you enjoy this article! 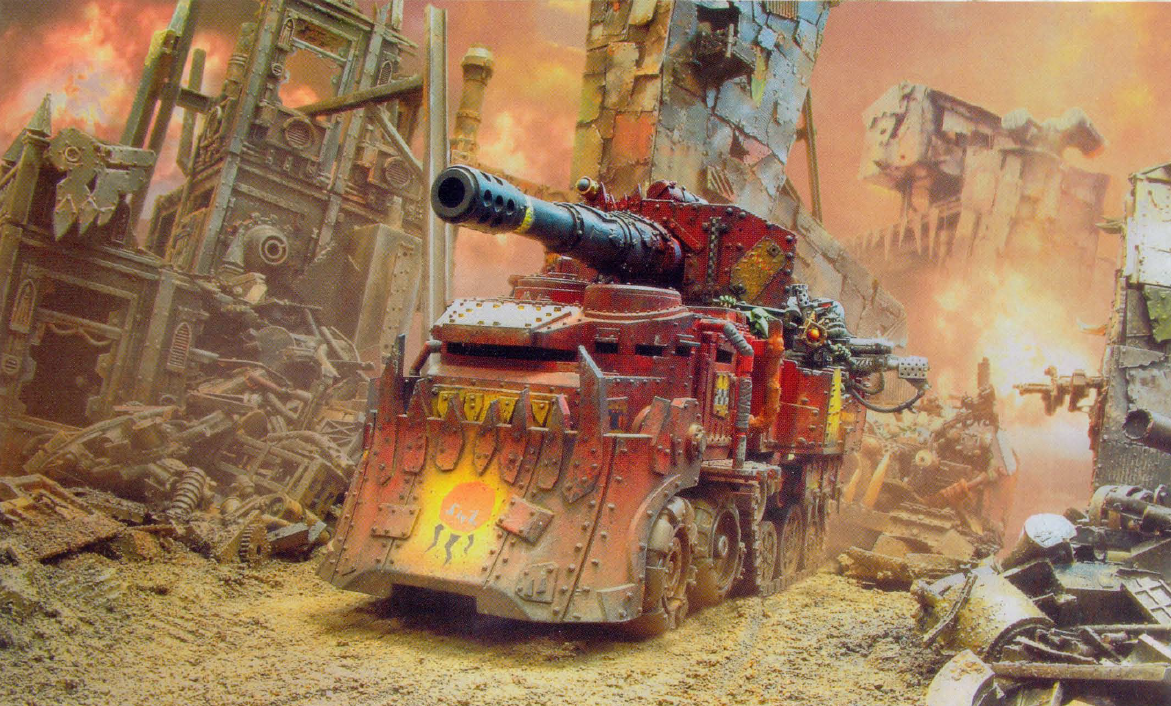 While it has often been referred to as the Ork equivalent of a Land Raider, the Battlewagon does have some striking differences even if functionally it is much the same in many ways. What you will notice immediately is that the Battlewagon is the only vehicle in the codex with an armor value of fourteen that applies only to its front facing, but the critical dissimilarity to the Space Marines' armored leviathans is that the side and rear facing are a much less impressive twelve and ten respectively. This means that a Battlewagon is most certainly as tough as a Land Raider if you can keep its front armor in the opponents' sights at all times, but the moment you can expose the flanks or rear it swiftly begins to fall apart as is typical of Ork technology. Four hull points does give a buffer against oncoming fire but the Open Topped distinction - both a blessing and a curse - leaves it far more vulnerable to rolls on the vehicle damage chart than you would initially believe; all it takes is a lucky natural dice roll of a six to outright destroy a Battlewagon from a penetrating hit. As a transport, this also means that any mob embarked upon it is uniquely vulnerable to template weapons; any such attack will distribute a random number of hits on any unfortunate Orks caught inside of the Battlewagon, often leading to untimely deaths that ferries lacking the Open Topped distinction aren't subject to.

However, being Open Topped does also come with two major advantages; the first is that the Battlewagon is an assault vehicle and thus acts as the heavy transport of the codex, whereas the second is that it has an unlimited amount of fire points for any occupant ranged unit to use. This gives the Battlewagon a wealth of ideal marriages to key Ork units such as Meganobz or Lootas, Slugga Boyz or Flash Gitz and so on; all of whom could use a durable albeit far costlier transport in comparison to a barely functioning Trukk. Where the Battlewagon's other distinctions from Land Raiders are apparent is in its potential to become a gun-toting battle fortress, able to utilize a whopping six ranged weapons all with 24" or greater ranges including the mighty Killkannon, a Lobba and nearly half a dozen Big Shootas or Rokkit Launchas. However, where the two giant vehicles can once again be perceived as mirror images of one another is the actual competitive uses of such a build; both can be designed as fire-bases but are woefully inefficient in the role with few exceptions, deceiving players into thinking that the transport capacity is an after-thought. As you should know by now if you have ever read an article of mine discussing Land Raiders, heavy transports such as the Battlewagon are designed first and foremost to carry your most valuable units across the battlefield safely; their high price correlates to the ease at which they can survive incoming fusillades that would  emphatically obliterate the alternative transport options. While the Battlewagon does have a clearer indication of this with its Ballistic Skill 2 and natural synergy with cover save providing wargear from embarked characters wielding Kustom Force Fields, it nonetheless needs to be specified as it will enable the best uses of the unit in your - or an opponents' - army lists.

There are many upgrades available to a Battlewagon but generally speaking there are a select few that you should make use of in most games, while others are rather circumstantial and thus can be left up to your discretion as to whether you should purchase them or not. The choice between a Reinforced Ram or a Deff Rolla is sadly an easy nod towards the former given how cheaply it renders the Battlewagon nigh immune to Dangerous Terrain tests, whereas the latter is a gutted husk compared to its former self. The 'Ard Case is a rather poor upgrade overall due to both removing the Assault Transport capabilities of the Battlewagon and reducing the total amount of fire points that any embarked unit can utilize which ensures that it is less than ideal for both assault and ranged mobs. The Grabbin' Klaw is a fairly amusing option if only because of how inexpensive and potentially game-changing it can be, preventing an enemy vehicle from fleeing to a better firing position or redeploying to take an objective; treat it as a "if I have points left-over" upgrade as opposed to something like a Boarding Plank that has some nice uses but is hardly mandatory and actually quite expensive. Grot Riggers are a more useful purchase for Battlewagons than nearly any other Ork vehicle so you should at least consider trying them out, but I find that the Open Topped nature of the model in question as well as its weak side and rear armor values will often see it felled before it can make full use of that juicy It Will Not Die rule - depending on what armies you routinely face, your mileage may vary. As far as optional weaponry is concerned, you can go one of two ways with this - the first being that you slap a few Rokkit Launchas on the vehicle and treat it as the transport it was designed to be without wasting points on guns you will rarely use efficiently. Alternatively, you can upgrade it with a Killkannon, even more Rokkit Launchas and possibly a Lobba or Kannon to set up a fairly dangerous fire-base that perfectly complements a Loota mob. The bare minimum I consider necessary for any Battlewagon variant is a pair of Rokkit Launchas and a Reinforced Ram, the former to absorb Weapon Destroyed results that would otherwise automatically Immobilize the moving fortress, the latter to ensure Dangerous Terrain doesn't stop the transport in its' tracks. 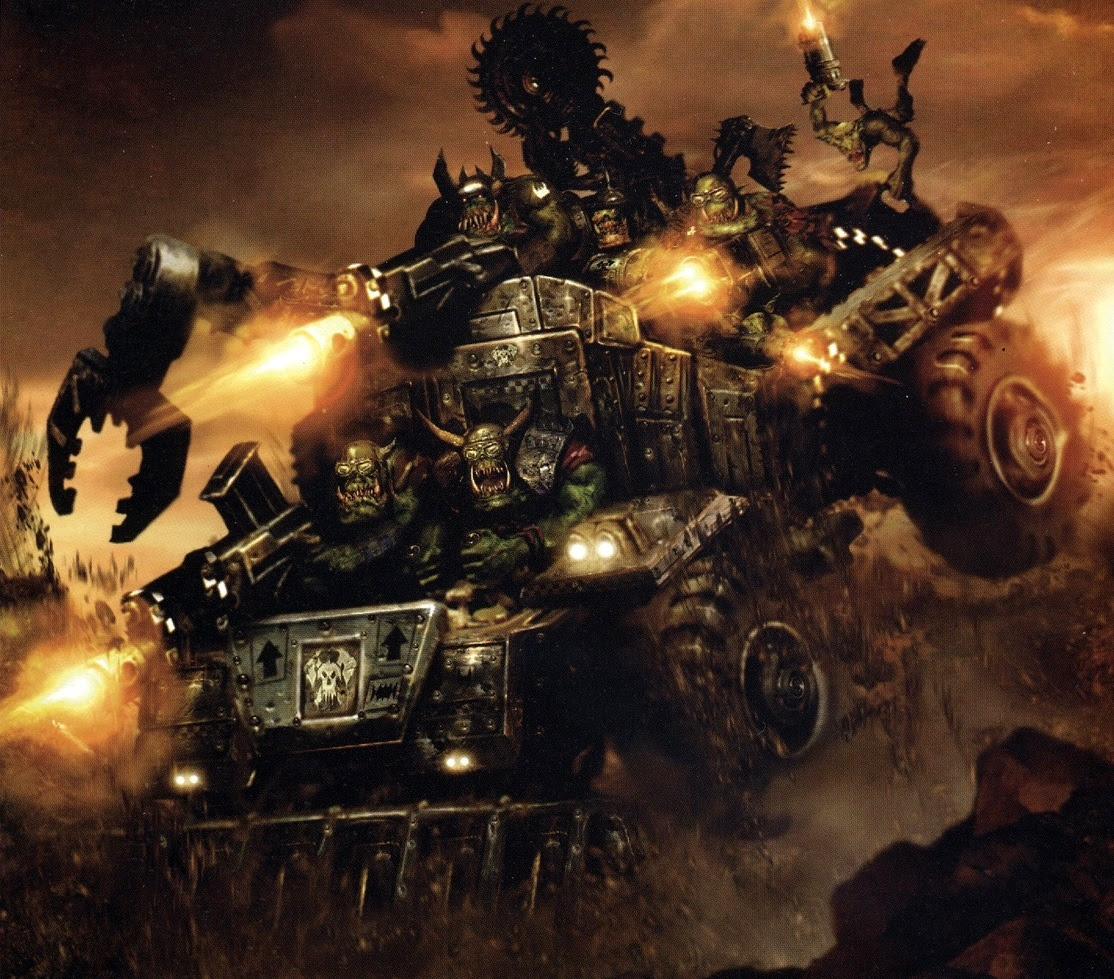 Often referred to as the "build your own" kit due to the incredible wealth of customization options on offer for it, the Battlewagon can be outfitted for a wide range of roles; however, you must keep in mind that much like a Land Raider variant, it is primarily a heavy transport and should always be treated as such with respect to its upgrades. Battlewagons exist either to ferry your most precious assault units across the board or give potent ranged units - such as Lootas - what amounts to a moving bunker, protecting them from most incoming fire and giving them a means of re-positioning quickly should the need arise. Meganobz and Burna Boyz tend to be the favorite selections to transport into the heart of an enemy battle line given the proximity each unit requires to truly deal death in their own unique fashion, both of them being utterly deadly in close quarters engagements. You want to keep its impressive front armor facing towards the majority of enemy units at any given time so as to not waste the defensive attributes a Battlewagon employs, but depending on the opponent and list this could be difficult and warrant extra considerations. Against Deep Striking enemies, making use of other transports such as Trukks to cover the side or rear armor values of a Battlewagon is ideal, or just generally flooding the space surrounding it to reduce the chances of enemies exposing its vulnerable flanks and rear. Utilizing terrain is also a safe bet provided you take the mandatory Reinforced Ram upgrade - or the Deff Rolla should you fancy it - so as to improve the chances of the Battlewagon surviving for a few extra turns.

Here are some builds I recommend for Battlewagons;

Battlewagon - Reinforced Ram, Two Rokkit Launchas - This is very much the cookie cutter build for a Battlewagon taken because of its impressive transport capabilities, sacrificing everything that is unnecessary so as to barrel across the board cheaply and quickly.

Battlewagon - Ard' Case, Killkannon, Lobba, Reinforced Ram, Two Rokkit Launchas - If you want to ferry around some Flash Gitz and make use of the pseudo Battle Cannon, this Battlewagon build is your best bet; however, keep in mind that it sacrifices the Assault Transport rules to instead be less vulnerable to the vehicle damage chart, so ranged mobs are the more ideal combinations to pursue.


Thank you all for reading this article, I hope you enjoyed it! I really like Battlewagons for providing exceedingly cheap and durable transports to an Ork army that otherwise has to contend with mere Trukks to ferry their fragile infantry around, though obviously the Battlewagons themselves aren't short of vulnerabilities. If you have any feedback for me in regards to the opinions expressed here, feel free to leave a comment below and I will do my best to address it. Thanks again!