Howdy there fine folks and welcome to another entry in my Space Marine Tactica character review series! Pedro Kantor ranks as one of the courageous and valorous heroes of the Imperium given that he has reforged a broken Chapter into one of the most staunch and successful sects of the Adeptus Astartes. I hope you enjoy this article! 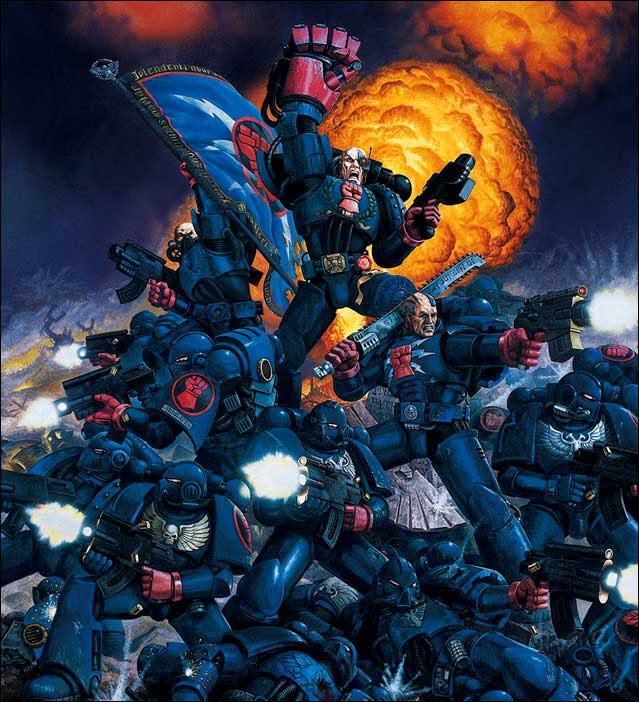 The mighty lord of the Crimson Fists is among the most decorated of any Space Marine as befits his position as a Chapter Master, and as such his profile reflects a powerful independent character that is skilled, powerful and durable. Weapon Skill 6 is roughly average for a hard hitting melee combatant even if his base Initiative 5 is eschewed in favor of an Unwieldy weapon in the form of a power fist; with a base four attacks and a particular bonus, this gives Pedro an impressive six Strength 8 AP2 attacks on the charge. Though these strikes are indeed resolved at Initiative step one, any foe that fails to slay Pedro before he gets a chance to act will most definitely be reeling in pain as the punishment that so many power fist attacks on a highly skilled combatant can dole out puts even Darnath Lysander to shame. In that sense, Pedro is second only to Marneus Calgar in the codex for raw effective damage output drawn from a character in an assault once the differing Initiative values for dealing death are accounted for, something that opponents and even users of the noble Chapter Master are rarely aware of.

His skill at arms also applies to his ranged capabilities of which he shines next to most of his competitors, using his Ballistic Skill 5 to guarantee full precision with the ancient Dorn's Arrow. Functioning as a super-powered Storm Bolter, Dorn's Arrow fires four Strength 4 AP4 shots at a medium 24" range with the Assault type, allowing Pedro to soften up the opposition before charging in. This is actually a fairly respectable ranged weapon on its own merits as it doesn't prevent Pedro from charging and can easily kill nearly a handful of light infantry or even a single hardy Space Marine in one salvo, but obviously it pales to what Pedro can achieve in close combat. In terms of actually soaking up return blows and continuing to fight, Pedro surprisingly excels in this department even when compared to most other special characters in the codex. Four Wounds with a Toughness value of four are average by Chapter Master standards, as are his 2+ armor and 4+ invulnerable saves, but his preset Warlord Trait - Iron Resolve - also confers the Feel No Pain special rule upon him, allowing him to ignore nearly any unsaved wound on the roll of a 5+. As such he is a respectable wound tank that can handle a fusillade of AP3 or even AP2 shots coming his way with little difficulty, but be wary of the fact that he is not an Eternal Warrior and avoid taking Strength 8 or Instant Death wounds on him whenever possible.

Elsewhere, Pedro is armed with the usual complement of wargear that each Space Marine bears; frag grenades and krak grenades provide optional ranged and melee attacks but will rarely see use in favor of the power fist and Dorn's Arrow, while using an Unwieldy weapon precludes the major purpose of the former. He is capable of unleashing an Orbital Strike once per game to deal potentially significant damage to a foe but with the caveat of incredible variance in terms of effective damage output and raw accuracy; it can be seen as merely adding further tools of destruction to an already bedecked individual. Pedro's place as an Imperial Fist does little to actually benefit him given that Dorn's Arrow is not technically a storm bolter and thus cannot benefit from the Bolter Drill special rule, but being a Space Marine has other advantages, namely the under-appreciated And They Shall Know No Fear. This ensures Pedro can never be caught in a Sweeping Advance, will automatically rally on the off chance that he flees and automatically passes any relevant Fear tests; that he can extend this to units that are not drawn from the Adeptus Astartes adds lots of great Leadership-based tricks to your bag of tactical treats.

Of course, what Pedro is arguably most famous for is his pair of unique special rules that heavily favor specific army builds; he allows Sternguard Veterans in his detachment to benefit from the awesome Objective Secured bonus, giving you the equivalent of elite warriors in the Troops slot with no drawbacks and greatly increasing the overall usefulness of an already rightly feared squad. Lastly, Pedro provides all models in his detachment - including himself - with a preference for fighting Orks so as to represents the Crimson Fists' bitter emnity with the species that caused their near downfall, allowing them to re-roll all ones on any to-hit and to-wound rolls made against the hated greenskins. What is most intriguing about this rule - aptly named the Oath of Rynn - is that it confers a bonus attack on both Pedro and any friendly models in his detachment that are within 12", greatly improving not only his own melee prowess as detailed above, but also that of any attendant squads. This exponentially increases the terrifying capacity for exalted warriors such as Honor Guard or Terminators to devastate their foes, and the lack of any caveat further allows this ability to be combined with a Chapter Banner to grant even more bonus attacks to the affected models and gives rise to the "blender" nick-name now associated with Pedro and Honor Guard fielded together. 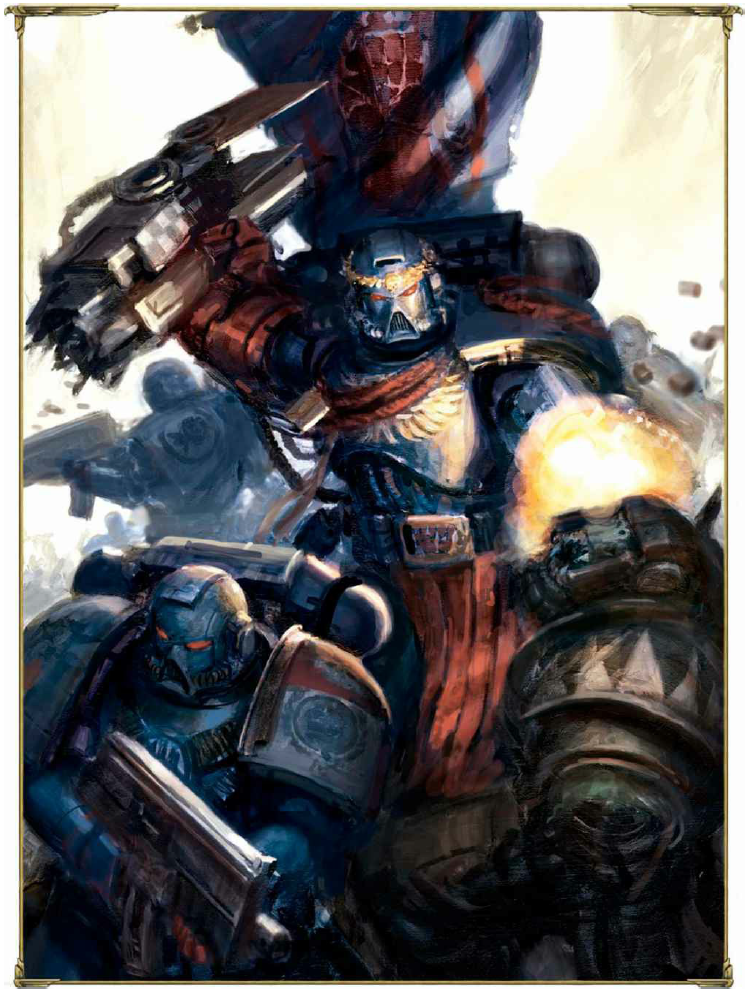 This will largely depend on what kind of firepower your opponent can bring and whether you feel using Pedro in the damage soaking role is worth losing a few wounds for; if massed AP2 or Strength 8 weapons are what your opponent likes to bring to the table, keep Pedro safe at the back or center of his bodyguard squad. Otherwise, you shouldn't be too worried about using him to ironically safeguard his own squad so as to have diminishing close combat or ranged damage potential. Pedro himself belongs inside of some kind of transport to make the most of his incredible melee capabilities and buffs that he provides to an assault oriented force, preferably paired up with either Assault Terminators or Honor Guard who both make the absolute most out of what is effectively Pedro's Chapter Banner. While I wouldn't advocate a Land Raider as I don't feel Pedro quite mandates it in the same way as someone like Marneus Calgar, a lesser transport such as a Drop Pod or Rhino should more than suffice and I would argue even be necessary for optimal usage of the son of Dorn. Of course, there is another obvious place that one could argue Pedro is destined to pair up with; Sternguard Veterans Deep Striking into the fray with a hail of combi-weapon shots. He turns them into respectable fighters at any distance and acts as the "gatekeeper" in most scenarios in the sense that he punches the life out of anyone foolish enough to challenge them.

Pedro works well in nearly any kind of army build that focuses more on an aggressive objective taking play-style given that he contributes decently in the shooting phase and incredibly in the assault phase, while his various army buffs are useful for both initiates and veterans alike. Ideally you want him to be leading the charge and taking out heavy targets with his plethora of power fist attacks and the incredible buff he provides in a large area of effect to nearby Crimson Fists, while he is also a dastardly evil choice to take against Ork forces. You want Pedro to join up either with a dedicated assault squad or a heavy hitting ranged unit at close ranges, while using him to soak up challenges and blast most foes to dust; he is a Chapter Master after all and a powerful one at that! His gun makes a mockery of light infantry while nearly anything from monstrous creatures to heavy vehicles can fall prey to the power fist, and even horde style units won't be able to stand against the sheer weight of attacks that Pedro brings to the field. Sternguard Veterans also belong in a Crimson Fist army led by Pedro given that they will have a bucket load of attacks and are incredible objective grabbers and holders with Objective Secured on top of their considerable ranged prowess.


Thank you all for reading this article ladies and gentlemen, I hope you enjoyed it! I adore Pedro Kantor not just for the character drama he presents but also because his rules truly reflect the savior of Rynn's World in the current codex. However, I am curious to hear your thoughts on the Crimson Fists' noble leader and would thus request that you leave a comment below with any feedback you have if at all possible. Thanks again!


We have been wounded sorely. Yet still we stand, with fire in our eyes and valour in our hearts. Let them think us beater. We shall teach them otherwise.
- Pedro Kantor, Chapter Master of the Crimson Fists
at 3:29 pm