Greetings fellow hobbyists and wargamers, I welcome you to the second last addition to my Space Marine Tactica series and hope that you are having a lovely day bringing righteous vengeance to the sworn enemies of the Emperor! As you may have guessed by the introductory sentence (or the title, but don't mention it to the guy who wrote this, he's daft) this will be the review of none other than Merek Grimaldus, one of the most honored and respected warriors among the Black Templars. I hope you enjoy this article! 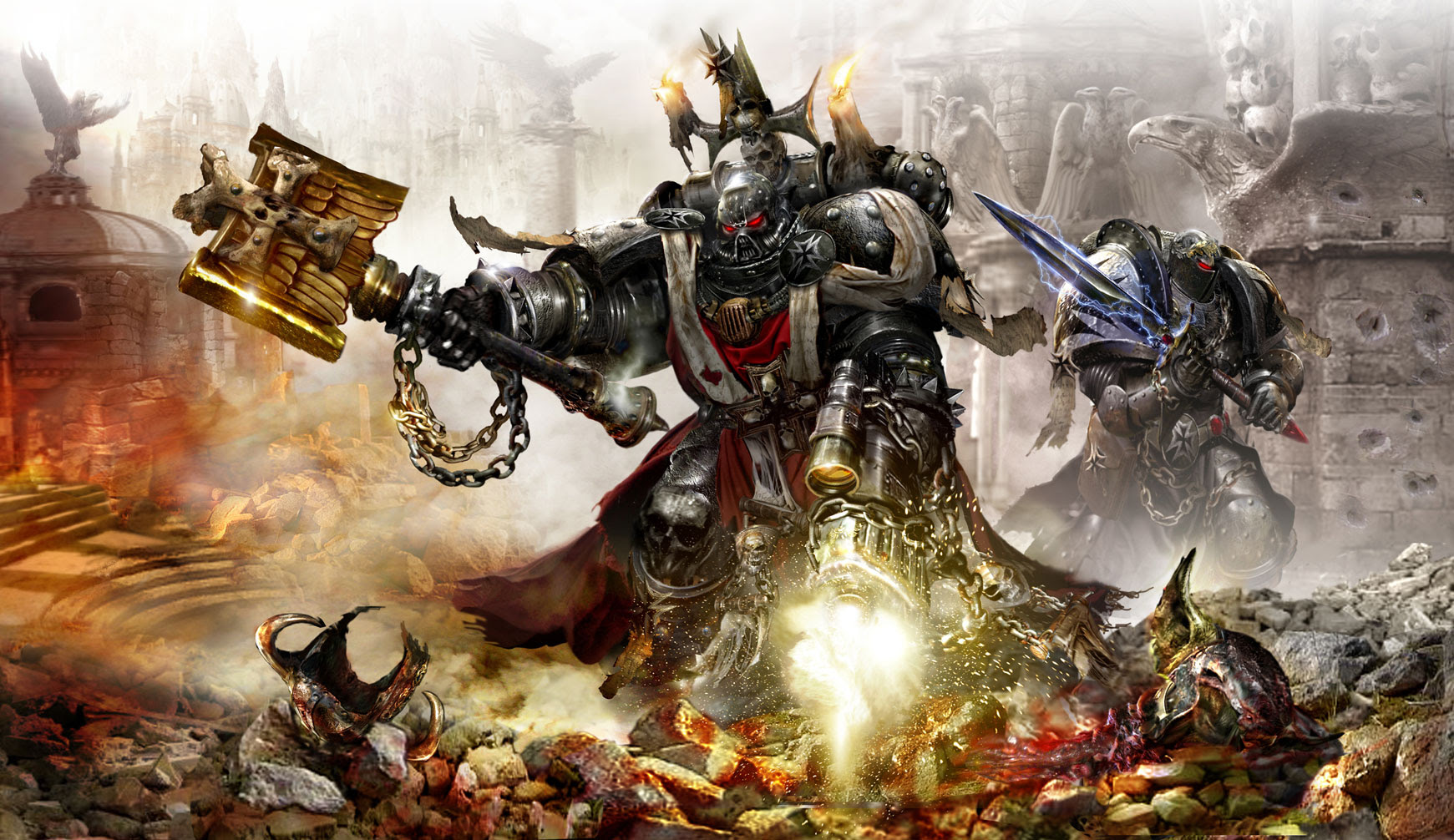 Billed as a hybrid between a Chaplain and a Captain in keeping with the Dark Angels' own Interrogator Chaplains, Grimaldus has an impressive stat-line and a host of support-oriented special rules to allow him to effectively function both as a slayer and an assistant. In a melee, Grimaldus is above average by Chaplain standards due to possessing three base attacks rather than two which, in addition to his dual close combat weapon bonus, provides him with a whopping five attacks on the charge. Armed with a power maul and backed by fairly average Weapon Skill 5 and Initiative 4 values (the latter is key as most units in the game are Weapon Skill 4 or less), Grimaldus strikes at Strength 6 AP4 and will re-roll all failed to-hit rolls in the first round of combat due to the Hatred component of the Zealot special rule. It's enough to cut through most units and put a dent on tougher opposition including light vehicles and 3+ armored monstrous creatures, but it isn't spectacular by any means. He also wields a master-crafted plasma pistol for some added ranged punch using his Ballistic Skill 4 to make for a highly accurate source of short-ranged Strength 7 AP2 shots, while he also has the usual assortment of Astartes-approved frag and krak grenades - being able to strike at Initiative on the charge is always handy. He is more durable than your average Chaplain thanks in chief to his three Wounds, though the other defensive stats - Toughness 4, 3+ armor save, 4+ invulnerable save - are all fairly generic for a Space Marine character and the lack of a 2+ save ensures that Grimaldus can't get through most assaults without suffering a wound in return. However, this is where the Reclusiarchs' natural resiliency comes into play; Grimaldus has the It Will Not Die special rule and as such is capable of regenerating a lost wound at the end of each of his turns on the roll of a 5+, making him a bit tougher than he initially appears. Like almost anything that has It Will Not Die, don't use its inclusion as an excuse to try to withstand lots of attacks; the chances of regrowing a wound aren't all that high and a character like Grimaldus could easily be slain before he can actually benefit from it.

As I mentioned previously, Grimaldus is a Chaplain and that entails doling out both Hatred and Fearless courtesy of the Zealot special rule to any unit he joins, adding a not insignificant damage increase to a units' melee attacks while also giving them all the joys of never running away, intentionally or not. However, there's an important twist here; what could be seen as Grimaldus' selling point is that he is the only character in the game to my knowledge that confers the Zealot special rule in a bubble rather than just to his own unit, providing re-rolls on failed to-hit rolls in an assault and immunity to all kinds of Leadership-based effects to all friendly Black Templar units that have at least a single model of theirs within 6" of him. While this isn't that large of a radius given the nature of assaults where the enemy is spread out with their squads, the probability of some but not all of your own eligible units charging in the same turn and so on, it's not quite as game-changing as it might initially seem. One consistent use of it is to have Grimaldus at the centre of an advancing line of Crusader Squads, giving them all the Fearless rules so that there's no chance they will retreat under duress. On the note of Black Templars in general, Grimaldus gets some nice little offensive buffs from them dependent on his bodyguard suffering casualties but they aren't really as useful for him as they would be for someone like the Emperors' Champion. Lastly, he has the Rites of War Warlord Trait which allows all friendly Black Templars in his detachment to use his game-high Leadership 10 in place of their own, a perfect addition to a likely assault-based army that could see you lose a match based off of one crucial failed morale test.

Completely independent of the above Grimaldus specific analysis are his unusual Cenobyte Servitors, an optional complement of infantry models that can accompany the Black Templars' Reclusiarch into battle. Up to five Cenobyte Servitors can be purchased in addition to Grimaldus and can either form a squad with him or operate on their own as a squad. Seeing as they are more human than super human and are Toughness 3 with 1 Wound each and a mediocre 4+ armor save accordingly, the former option likely won't be your most common option for deployment. Of course, what makes the Servitors unique is that they are ever so slightly more expensive than Space Marines, contribute no damage outside of some paltry melee attacks, but crucially provide every friendly Black Templar unit within 6" of them with the Feel No Pain (5+) special rule. This incredible area-of-effect defensive bonus is obviously meant to combine with Grimaldus' own Zealot aura, but obviously that would also make him and them a huge target of army-buffing goodness. This is because Grimaldus is treated as joining the Servitor unit if he deploys with them just like any other squad, and so you can never hide the Servitors inside of another unit such as Crusaders - however, Grimaldus can given that he is an Independent Character. Whether you elect to join him to the Servitors, run them separately or even forgo their inclusion altogether, Grimaldus certainly offers you a lot of different abilities to utilize. 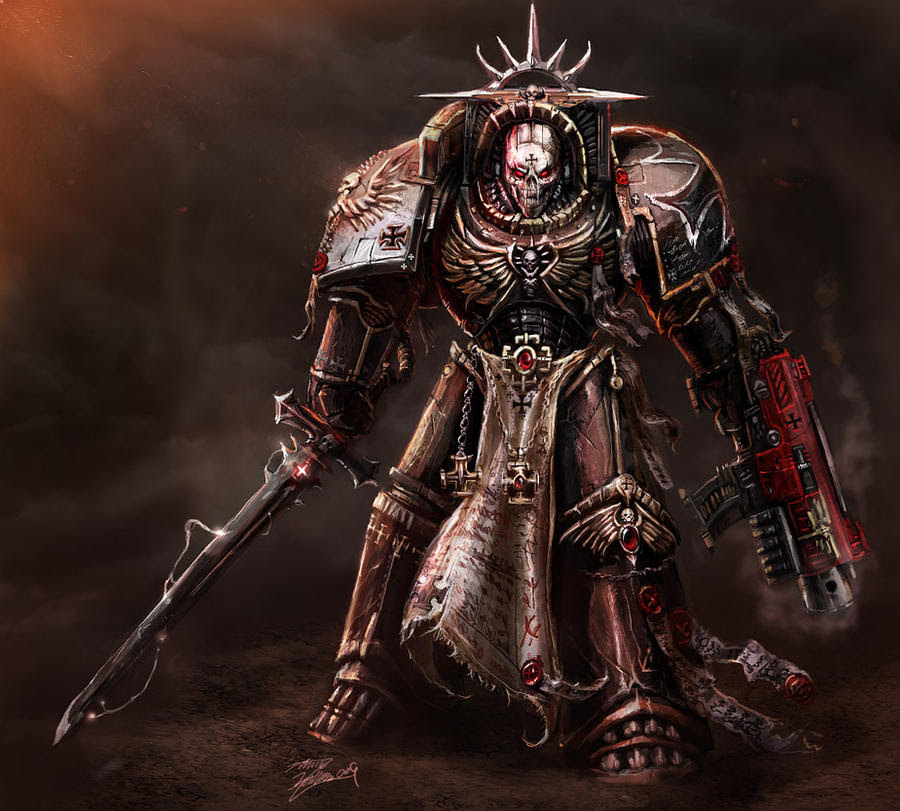 This is a much more interesting topic than it would be for any other character in the codex due to the mere presence of the supremely useful Cenobyte Servitors, while Grimaldus' own Unmatched Zeal special rule will force you into some tough tactical considerations. Making the most of the area-of-effect abilities provided by Grimaldus and his mindless attendants involves grouping up at least two or more units - usually infantry - but this also renders all those affected as highly vulnerable to weapons using blast markers or templates, especially the siege guns wielded by the Typhon or the Warp Hunter. Cover and Feel No Pain offer no reprieve against these weapons where spacing becomes the only way to save models from an explosive death, so you absolutely must take into account what your opponent is using before deciding whether to heavily bunch up or not. You also must weigh up whether Grimaldus should stay back with the Servitors or join a melee given that he can contribute decently well to that area of warfare, but ultimately, there is one tactic that undeniably stands above all others with regards to the placement of the Cenobyte Servitors specifically. On their own merits, Servitors are fragile and pitiful; however, provide them with a transport and suddenly they not only have a much more mobile form of protection as opposed to a tanking character, you can also quickly re-position them to wherever you feel their Feel No Pain bubble is required. As for Grimaldus himself, it could be worthwhile to follow the same trail of thought with him and use him to support the army from the comfort of a Rhino or Razorback, but generally I prefer getting him stuck into a fight if only because it ensures that at least one unit will be buffed by his Zealot rule. Remember, units have to actually be within 6" of Grimaldus when they start fighting in an assault to benefit from it.

In direct contrast to his previous incarnation and much to my own surprise, you absolutely should utilize the Cenobyte Servitors wherever possible provided you have a spare Fast Attack slot or other units' Dedicated Transport for them to hijack; the value of a Feel No Pain bubble, no matter how small, simply cannot be under-stated. Grimaldus himself is more at home leading a powerful dedicated close combat unit that benefits most from the Hatred aspect of the Zealot special rule, especially if they have a high volume of attacks; Honor Guard bearing a Chapter Banner and Grimaldus are a match made in the Emperors' eyes. His own melee capabilities are decent and especially so if you can stack up some other buffs such as the aforementioned Chapter Banner, but be wary of any kind of proper beat-stick; Grimaldus isn't suited to taking them on unless they are Toughness 3, but he can nonetheless smack a few wounds off of most enemies. He is a decent Warlord option for Black Templars given that Crusader squads lack proper Sergeants and are thus Leadership 8, but what should immediately catch your eye about it is that the Warlord Trait is mostly rendered moot if the unit forced to take such a test is within range of his Unmatched Zeal ability; outright ignoring the tests means that only attacks using the Leadership value of the unit such as Psychic Shriek will give use to the Rites of War in such circumstances.


Thank you all for reading this article, I hope you enjoyed it! It goes without saying that Grimaldus improved massively with the latest codex and I'm truly glad for it as he is one of the great heroes of the Third War for Armageddon and plays a pivotal role in many stories key to the Black Templars' history. He stands as a true representation of what a Chaplain should be rules-wise in my opinion, especially if his optional Cenobyte Servitors are accounted for. In any case, if you have any questions or feedback for me then please feel free to leave a comment below and I'll do my best to reply. Thanks again!


To the darkness I bring fire. To the ignorant I bring faith. Those who welcome these gifts may live, but I will visit naught but death and eternal damnation on those who refuse them.
- Merek Grimaldus of the Black Templars
at 2:04 am