Hello there everyone and welcome to the third last entry in my seemingly never-ending Space Marine Tactica series, this time covering the glorious warrior that is the Emperors' Champion. There are few Space Marines more skilled in the art of the duel than this particular character and I'm glad that he offers Black Templar players a budget beat-stick and alternative to the other special characters. I hope you enjoy the article!

At first glance, the Emperors' Champion has stats that seem to be more in keeping with a Librarian or Chaplain than anything else, but his actual in-game utilization undeniably follows the template set by a Captain - that of a strong combatant seeking to win glory in the Emperors' name at the head of a squad of fellow Space Marines. Weapon Skill 6, Initiative 5 and three base attacks (counting his dual close combat weapons) are what you should come to expect of any character marked out as a warrior, but truly what defines the Emperors' Champion in a melee is his weapon and unique special rules. The Black Sword is one of the strongest artifacts wielded by any individual among the Adeptus Astartes, providing the Emperors' Champion with +2 Strength and AP2 on his combat strikes as well as a re-roll on any single failed to-hit roll due to its Master-Crafting. His Slayer of Champions special rule provides challenge-specific benefits that consist of giving him full re-rolls for all failed to-hit rolls rather than just one while also adding a deadly edge to his strikes; any to-wound roll the Emperors' Champion makes that rolls a six result will also inflict Instant Death. Considering that the Emperors' Champion can very easily benefit from Counter-Attack or Rage due to his Black Templar Chapter special rules, this provides Space Marine players with one of their strongest character killers with regards to associated point costs. This will see him strike with between four and five attacks on the charge that are all resolved at Strength 6 AP2 which can cut through most monstrous creatures with contemptuous ease, let alone lesser foes such as Bikers or Terminators to which there are few deadlier opponents among the Adeptus Astartes.

While there are other sources of high Strength AP2 attacks that can be had for less points, the Emperors' Champion is one of a few that can actually provide these at his native Initiative value of five; these will slay most 2+ armored foes before they can strike, much unlike what an Unwieldy weapon would allow. Factoring in the re-rolls on failed to-hit rolls in challenges as well as potential Instant Death wounds allows the Emperors' Champion to demolish many other dedicated melee characters that lack the Eternal Warrior special rule, while also proving a nightmare for many monstrous creatures that are themselves capable of issuing and accepting challenges. However, there are limits to what even the Emperors' Champion can achieve in a melee and this is important to stress; he cannot deal with any true melee monster such as a bedecked Chapter Master, a Phoenix Lord or anything of a similar pedigree. The reason for this is that he himself is not that survivable given that he has a paltry two Wounds to his name, while Toughness 4 lends itself to bleeding wounds against strong opposition. The Armor of Faith does provide him with 2+ armor and 4+ invulnerable saves, but these will only serve to deter models that should rightfully fall to him in the first place; those armed with AP3 melee weapons or that lack the means to survive his attacks before striking back. Of course, such an equation can obviously change with psychic powers or other effects thrown into the mix, but on his own merits, the Emperors' Champion is a capable challenger but certainly not in the same league as the top dogs like Draigo or Jain Zar - however, for the points, you really don't need him to be.

As befits his role in the Black Templars' crusades, the Emperors' Champion is forced to issue and declare challenges which is normally only a detriment given that it removes the element of choice from you as a player, but given his incredible pedigree in that arena it actually isn't that painful when compared to some other examples from different codices. He is equipped with barely noticeable wargear alongside his Black Sword, including a bolt pistol as well as both frag and krak grenades. The only other remarkable trait the Emperors' Champion possesses is that he is one of the only characters in the codex to natively possess the Fearless special rule instead of the And They Shall Know No Fear special rule, ensuring he and his unit will never flee but also presenting the dilemma of not being able to choose to go to ground or run from combat against a foe he cannot harm. Still, being able to spread this to any Armies of the Imperium unit of your choice is certainly impressive given that he can act as a hidden blade leading a large band of regular humans or powerful Space Marines. 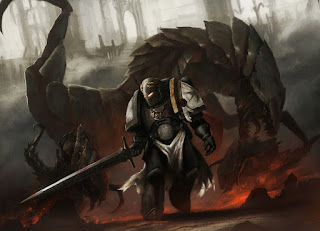 The Emperors' Champion simply cannot be counted on as a wound tank despite his strong saving throws matching up with those born by Helbrecht given that he possesses only two wounds, meaning you need to encircle or otherwise protect him from oncoming fire wherever possible. However, once combat is reached, the shackles can and will be unbound due to his fighting prowess and necessary challenge issuing. As a dedicated melee character that does not provide any kind of support ability to your force outside of a potential Warlord Trait if you elect to have him be the army leader, he requires a method of reaching assaults as fast as possible to ensure he "makes his points back" without wasting too much time being shot at and potentially killed unceremoniously by guns rather than blades. A very Black Templar oriented response would be to use a Land Raider Crusader, but you could realistically use any form of transport; whatever gets the job done quickly and efficiently for you should be utilized, whether it be a Drop Pod or a Rhino alongside a like-minded crew. Be aggressive and make a bee-line for the first good assault opportunity where you can get stuck into a melee with the Emperors' Champion and his bodyguard and move on to the next in an advantageous position.

There are few characters more impressive in a challenge at such a price than an Emperors' Champion considering that he has high Strength AP2 attacks at a good Initiative value and his ability to confidently engage and defeat many types of foes relative to his points cost, two metrics that are key to determining how useful a melee monster is. With that knowledge in mind, it should be very obvious what he is designed for and how you should use him; apply Emperors' Champion to opponent, wait a short amount of time, find new opponent to apply Emperors' Champion to. Simple yet effective. In an edition where assault outside of death-stars is generally frowned upon by the core rules and powerful ranged armies dominating the competitive meta-game, most army lists won't feature a character capable of withstanding the Emperors' Champion - heck, even monstrous enemies such as Riptides and Mawlocs would struggle to take one on in a duel to the death. You should feel safe pointing him at an enemy and letting him carve out his own particular brand of slaughter, but nonetheless it pays to be cautious wherever a power-house of either the shooting or assault phases is concerned. Considering his incredible skills in a challenge that match characters far more expensive than he, you should look at his Honor Death special rule as a blessing in disguise; it removes the weight of indecision from your shoulders and gives you even more reason to choose his targets wisely.


Thank you all for reading this article, I hope you enjoyed it! While I fully understand that an Emperors' Champion isn't necessarily the most competitive option, I'll be damned if he isn't fun to use; besides, the point of these articles (in theory at least) is to promote the use of all models, not just those deemed strong by the community. In any case, if you want to point out my probable hypocrisy or otherwise contribute your opinion on the thoughts expressed regarding the Emperors' Champion, feel free to leave a comment and I'll do my best to reply. Thanks again!