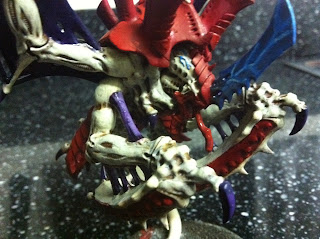 Hey guys, JT here with an update to the Tyranid Project Log, the first part can be found here where I discussed my method of doing blood and stuff (thus the title) and generally whinged about the huge mound of painting I need to complete - an article about finding time to paint will be going up shortly - today I will be discussing my method of painting power weapons, why L2E decided his Tyrant needed a power sword on its head, as well as a quick insight into how your choice of colours could mean more then your ability to highlight properly.

Click the 'read  more' link below to view the article.


I certainly must apologize for the poor quality photo's we've been using in our articles, we are looking into gaining permanent access to a DSLR camera to better showcase my rendition of Hive Fleet Kraken. With that cleared up, I'd like to update you all on how the commission is progressing - I finally finished that darn Hive Tyrant; which was more of a pain then the Trygon to finish, despite being half the size, and really started to become a chore towards the end - the Screaming Skull pot I was using had somehow become so watered down it was like using a wash - a wash that made the nice Tyrant turn into a flying pile of puke.
You will notice that the bright colours really do help to cover what really isn't the best paint job; which got me thinking about my philosophy behind painting this army - the big ones matter. It is a habit of most hobbyists to pour all of their talent into the big ones, the commanders, the Land Raider's, the terminators etc; usually at the expense of the core troops that make up the vast majority of your army. This really isn't a bad thing.
I like to make any army I paint pop (my Imperial Fists are bright yellow - nothing pops more than bright -bloody - yellow) by using bold, contrasting colours with a rich palette; with a small amount of 'spot colours' to help make the thing stand out just that little bit more - Tyranid's really do exemplify this in a wonderful way.
The denizens of Hive Fleet Kraken roll around in a bright red carapace, with pale flesh and dark talons - a striking colour scheme if there ever was one. I find that this kind of colour scheme, with contrasting colours with a bright central colour, really helps make the army stand out on the table top in a good way; taken as a whole, the swarm does look good whilst it eats your army mercilessly. Even though I am working on a commission for a table-top standard army, I knew it simply would have been a waste of my time, and L2E's money, if I spent hours on each individual Termagant - people don't notice if I do, and the damn things die so quickly they're barely noticed on the field; so I set out to batch - paint the lot of them, using dry - brushing and washing to do most of the work - techniques I avoid almost entirely on the big monsters (which everyone stares at) simply because they are the centre -pieces of the army.
This got me thinking as to why they still look good on the tabletop when really, they're not up to scratch with the rest of the army - I believe the hallmark of an aesthetically pleasing army is the colour choice, not the technical skill. At the end of the day, people will usually be viewing your tabletop army from a few feet/metres away and really won't notice that you used 8 different shades of green on each Ork Boy in your 120+ hoard of boys - they will notice, however, the bright yellow/red armour you spent 10 minutes doing; because that's how these things work - if you want to draw attention and look good on the field of battle; use bold colours and really think about the 'look' of your army before you waste time trying to paint a Fire Warrior to Golden Daemon standard. A good example of the usefulness of bright colours is illustrated quite clearly by a gaming icon - the Helghast -

I know your eyes were drawn straight to the eyes, and they are a very distinctive and attention grabbing colour when contrasted against the drab grey of the uniform and helmet. This was done deliberately, one of the defining features of the iconic Helghast design is those menacing eyes - and you can bet the choice of colour was agonized over to grab the most attention. Try and think how you can apply that principle to your table top army, because your opponent really won't spend that much time ogling the finer details of your models if you're busy killing his off.
On the topic of colour choice, adding a lightning - cleaver to a big winged monsters head certainly draws attention - raised eyebrows mostly - but it is different. I'm aware that I'm not the best at painting power weapons, in fact - most people prefer the mirroring technique employed by GW which is all fine and dandy - but is so far, just too hard for me to replicate to my satisfaction.
So here is my guide to how I paint my (blue) power weapons: 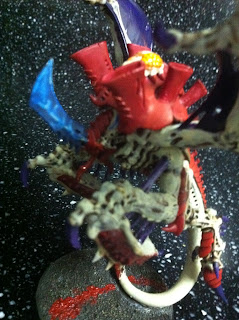 Although the process involves a fair amount of steps, it is not nearly as time consuming as you would think. My best recommendation before attempting this technique is to look up photos of lightning as a reference; this guide is really to help those of you with little painting experience with colour choice more then anything; and as such, your success is largely dependant on how firmly you study the source material. The most important thing when painting lightning is to get an idea on the shape, and vary the intensity across the weapon with clearly defined lines.

I hope this guide/discussion has been helpful; as always, leave your suggestions, critiques and questions in the comment section below, find us on the +Bell of Lost Souls lounge or leave us a message on Facebook.