Hey guys, Learn2Eel here with a special update; we've got a host of High Elves stuff for you, and it isn't fake! We've had a lot of confirmed details leaked over the past day, both from the White Dwarf and the preview images of the codex on the iBook store. Enjoy! 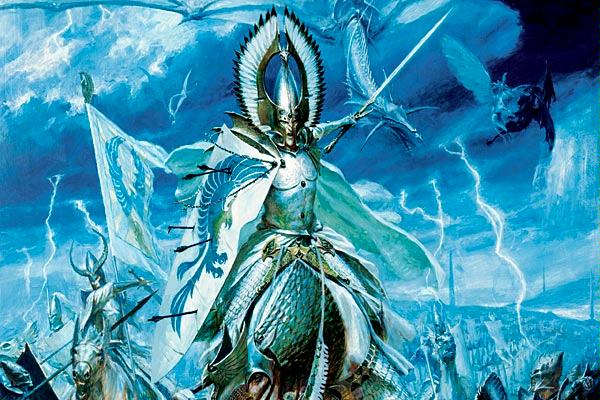 My first impressions about all of these rumours is that, well, High Elves are looking like they will be a top tier Fantasy army. As a High Elf player myself who favours them above any other Fantasy army, this is both disconcerting and a cause for joyous celebration; not having to rely on gimmicks or cheesy combos to play an effective High Elf army in a competitive environment is surely the mark of a good army book. However, I don't want the army to break the trend of balanced army books that 8th Edition has popularised. See what you think below, with full credit to Hero over on his blog.

Flamespyre Phoenix = 225
WS5 S5 T5 W5 I4 A3 Ld.8
Monster
Special Rules:
Attuned to Magic - 5+ ward and close combat attacks are magical.  in add, when rolling to determine the strength of the winds of magic, compare the highest d6 rolled with the table below and determine the effect.
1 = ward is 6+ instead
2 = phoenix has -1 s
3 = phoenix has +1I
4 = has +1A
5= +1S
6=ward 4+
Fireborn - 2+ ward vs. wounds caused by flaming attacks
Flaming Attacks
Fly
Large Target
Phoenix Reborn - as soon as he loves his last wound, remove the model and place a phoenix reborn counter to mark the centre of the death spot.  at the end of the turn roll a d6 for each phoenix reborn counter and consult the table.  1-2 dead forever, 3-5 centre a large round template over the center, all models friendly and foe suffers s4 flaming, the counter remains in play, roll at the end of next turn, yours or oppos.  Rise from the ashes on 6+, place him anywhere within 6" of the center, at least 1" away and remove marker.  He is back with d3+2 wounds.  If you have a rider, he dies with the phoenix, or he returns with the phoenix.  If the phoenix died with a rider on him, add +1 to you roll.
Terror
Wake of Fire - if he moves over one or more uneganged enemy units, choose one of those units - that unit suffers d6 s4 hits plus d3 per rank after the first. flaming,

Teclis = 450
T2 3W Ld.10
Sword of Teclis - wound on 2+ no AS
Moonstaff of Lileath - one use only - you can either choose to add a bonus power die to each casting attempt, of if teclis suffers a miscast, the miscast is ignored.  In either case, Teclis' S and T are both reduced to 1 for the remainder of the game ROFL
Scroll of hoeth - one use only - same
Warcrown of Saphery - Increases his Wizard level by one, so he's a Lv.5 wizard technically
Teclis does not generate spells, he either knows all of the spells from High Magic or can choose one spell from each of the 8 lores (yes, chooses)
Lileath's Blessing - +1 to cast from all lore of high magic

Magic spells:
Apotehosis
5+ augment 18"
immediately regains 1 wound, 10+ for d3 wounds.  Regardless of how many wounds gained, you also gain Fear.

Arcane Unforging
13+, direct damage with 24" single enemy model.  Suffers a wound on a dice grear than or equal to unmodified armor save.  No AS allowed.  Reveal to the caster all magic items, if you have more than one, randomly select one and its destroyed on 2+.

Drain Magic (sig)
cast on 7+
friend or foe within 18"
friendly augment, hex on enemy
all RIP spells affecting the unit are immediately dispelled, and affects of all other spells on the target unit immediately come to an end.  Can be all units within 18" for 14+.

Shield of Saphery (lore attribute)
Each time a spell is succesfully cast, the caster and his unit immediately gain +1 to their ward save to max  of 3.  If you don't have one, 6+.  Stacks.

Tempest 12+
direct damage.  large round template within 30" of wiz, scatters d6.  All models hit suffer s3 hits (models flying is s4).  If a model suffers any unsaved wounds, it suffers -1 to all hit both shooting and cc.  Those that do not use BS needs a 4+ to fire.

Walk between worlds
cast on 8+
augment, 24+
Gain Ethereal and can immediately move to 10" as if it were remaining moves sub-phase.
Can make it go 20" + Ethereal on a 16"

Armor of Caledor for 50 points

Shield of the Mermrym - 15pts, shield, unless he's using a weapon that uses 2 hands, he has parry 4+, can be used with a magic weapon

Moranion's wayshard - enchanted, 50 points.  Models on foot only.  Has ambushers special rule.  He can give archers or Spearmen up to 30 units in size the same immediately before deployment.  He has to join that unit if he does.

Witness to Destiny - 4+ ward (assuming this is anointed)

touch of the everqueen - her close combat attacks vs. forces of destruction have HKB.

Stave of Averlorn - one use only, arcane.  It allows Alerielle to immediately attempt to cast a spell she already cast that phase, even if failed or miscast.

Stone of midnight - Alith 4+ ward, enemies suffer -1 to hit when shooting against Alith or his unit.

Swooping Strike - a model upgraded has Devastating Charge and +1S on the turn he charges.

Talisman of Hoeth - Eltharion has MR1, counts as a Lv.2 Wiz, who uses spells from any of the 8 lores.

Mark of Asuryan - If Caradryan dies, d3 wounds no AS.

Naval Disipline - If a unit containing at least one sea helm is successfully charged during the movement phase, it can attempt to change formation immediately after your opponent has moved all of his charging units.  To do so, the unit must take a Ld. test.  If passed, immediately combat reform.  A unit cannot use this if made a Flee! or stand and shoot (doh!).

Pelt of Charandis - Korhil counts his AS as one higher vs. CC, 2 points higher vs. non-magic shooting.  Poison does not auto wound, wound as normal.

Quicksilver Shot - Models shooting attacks have quick to fire as do all sisters of averlorn and high sisters in the same unit.

Reckless - Dragon mage +2 to cast from lore of fire (cumulative with other bonuses), never receive bonuses to dispel.

Helm of Yvresse - +1 to Eltharion's AS and gives him and his mount 5+ ward.
Horn of Isha. enchanted. one use, can be used at the start of one of your movement phases.  For the remainder of the turn, all models in the unit receive +1 to hit on all shooting and close combat attacks.

Gem of Sunfire - Enchanted. One use only. All bearer's spells, shooting attacks, close combat (and his mounts) have +1 to wound, provided they also have the flaming attacks special rule.
Golden Crown of Atrazar - Talisman, one use.  2+ ward against first wounding hit by wearer.

Armor of Caledor 2+, 6+ Ward, Fireborn special rule - 2+ ward vs. flaming
Banner of Averlorn - Spells from Lore of Light and Life by a friendly unit containing the banner are +4 to cast.  If Alarielle is slain, this is immediately lost.
Banner of World Dragon - 2+ ward vs. all wounds caused by spells, magic weapons, and magical attacks.  Furthermore, all dragons within 12" of the World Dragon have Stubborn.
Blade of Leaping Gold - +3 attacks, any roll to wound of 6 ignores AS.
Book of Hoeth - Allows the user to re-roll a single dice from each of his casting or dispel attempts, results of 6 cannot be re-rolled.
Cloak of Beards - Enchanted.  Cause Fear.  Against Dwarfs, cause Terror.  Dwarfs gain hatred vs. you.  At the start of each cc phase, roll d6 for each magic item carried by each model from warhammer dwarfs in base contact with wearer.  On a 4+ the magic item is destroyed and cannot be used..etc.

Boon of Isha - All models in the Everqueen's unit are magical.  Her unit is Immune to Fear/Terror.

Blessings of Ausryan - all models that contain an anointed of Asuryan havea  6+ ward save and is ItP.
Blood Oath - Ethlarion gains +1 to hit vs. Grom.

Chaos Bane - At the start of each of Allerille's magic phase, before rolling for winds, every unit with the demonic special rule within 12" of her suffers d6 s4 distriubuted like shooting.  However, she suffers -d3 penalty to her casting attempts if there is one of more models with demon within 12" of her.

Bow of Averlorn - 24" S4 Arrows of Isha, Flaming, Volley Fire
Arrows of Isha - magical. -1 AS against wounds caused to forces of destruction


What do you think of these rumours? Are you looking forward to the army book as much as I am - hint, I am immensely excited! - or are High Elves not really your thing? Let us know in the comments below! I'm very excited to share these wonderful rules with other budding Fantasy players.
at 11:58 pm