Hey guys, JT here with all the shiz niz on the giant new Gundam/Tau model; the XV - 104 Riptide! As L2E mentioned in his quick break down of the Tau Codex, he has passed along this glorious new mech to me to put together, tinker with, paint and review for the greater good of the interwebz; L2E will be including a break down of the rules in the forthcoming Tau Tactica series.
I will also be discussing the colour scheme I've chosen for my burgeoning Tau force, and how I went about doing it on my test model.


The Riptide is an epic addition to GW's range, and it is a mammoth model that requires no small time investment to build - if you check out the pics on the GW website, you'll notice that the model is made from two sprues with mostly small parts; it isn't as hard to build as you might think from looking at those parts. Throughout the entire build, I found only one annoying part that was slightly unintuitive but that's partially because of the scenic base I built for the model.

The Quality
When I opened the box, I was amazed at how large some of the components are - the foot pictured above is one solid piece and the components that make up the jet pack and the main weapons systems are made of similarly large pieces. The piece's were all relatively clean and attached in logical places to hide the joins for lazy hobbyists. Assembling the kit was a breeze, and I really appreciated how easy it is to pose the model to your hearts content. The kit essentially has two options in terms of how you construct it, one is to keep the tiny (and hidden) guide pins attached which help you construct the model in a standard pose without much thought; the other option is to cut off the guide pins which will give you free range to pose the model with no green stuffing required; the detail is outstanding in that regard and extremely well thought out.
On the detail, for such a large kit there is a nice amount of detail placed onto each section; but it lacks the fiddly tiny pieces that some other kits feature - which is a god send for some people. I was overall, extremely impressed with the quality of the kit and it does show a large amount of thought was placed into its design.

The Build
Full disclosure, I spent the better part of six hours putting the model together - it would have been half the time if I had not elected to build such an elaborate base and position the model in such a strange way - despite the kit being easily manipulated to adjust its height and such, trying to have it stand on top of a dreadnought was really not easy. I don't fault the model itself for this, but really I would just offer the tip that you spend a lot of time dry fitting the thing before constructing elaborate scenic bases for it - the legs being back jointed makes it a lot more awkward to position the thing mentally; as the legs are really just not natural - and the feet are basically impossible to manipulate in any meaningful manner.

I would recommend not following the instructions included in the kit in some regards; you can spend quite a lot of time posing the model to create an awesome pose that you're happy with - but the instructions advise sticking all the joints together as you go. I found that having a strong mental image of how I wanted the finished model to look helped a great deal, and constructing the model in distinct stages helped me refine my idea. The biggest issue can be the arms, which are also quite easy to reposition - you need to be weary of the shield generator's fins as they might not fit if you have the shield pointing back toward the jets. The guns are also quite heavy and you will require a generous amount of glue and a steady grip to get the arms to sit in the position you want.

You may be able to magnetize the main weapon's onto the armour, but it won't be easy. It is a large narrow piece that is quite heavy, but I'm sure you could accomplish it with some planning - the smaller weapons may not be worth magnetizing as they sit quite well on the suit with the included weapon mounts.

The model is also extremely top heavy and won't play well on uneven terrain without weighing the base down somehow - If you have some slate lying around I would seriously advise using it on the Riptide to stop your giant Mech tipping forward. You could build the model to be kneeling to negate the problem, but you'd be losing height and line of sight on the model which is problematic since it is basically a glorified artillery unit that is unusually hard to kill. I have also  elected not to attach the torso to the hips for ease of transport, and the model doesn't seem to pivot without the glue holding it in place.

The Price
The price down here in Australia is excellent value, being a mere $16 more then the much smaller XV- 88 kit, and I'd call this model a steal for the price. The quality is excellent, it is a huge points sink if you're trying to build an army quickly and it is an awesome show piece model for those of us who love our battle suits. I look at this thing as a poor man's titan, being the Tau equivalent of the larger Imperial Titan's - and will likely be the tallest model in many a hobbyists collection. It is hard to believe that this thing is $20 cheaper then a Storm Raven/ Land Raider when it seems quite similar in terms of the amount of plastic used. 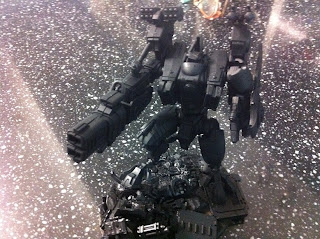 I can see this thing popping up in some Golden Demon's as the kit does have some decent scope for conversions and has some nice area's for free hand shenanigans. As a whole, I haven't been quite this impressed by a GW kit since the new Raptors were released, but it won't convert any fans over to the Tau who didn't already like the aesthetics of the army. I also would like to note that you do end up with a few extra bits, but they won't be too useful except in the case of the heavy burst cannon - which would be an awesome stand- in for a Quad Gun on an Aegis Defence Line.

If you've always dreamt of a gigantic battle suit to compliment your commie fish men, then you shouldn't hesitate to get this kit - it really is an excellent piece of work and I think many hobbyists will be pleasantly surprised.

I would like to talk briefly about the Tau army I'm working on, and the colour scheme I've chosen. Along with a lot of other people, I leapt at the announcement of a new Tau book - I've always been a fan of the Tau yet the outdated army book and models held me back for many years. The main attraction of the Tau to me is the battle suits first and foremost, but also the idea that they represent a closer vision of future human technology then the Imperium itself. 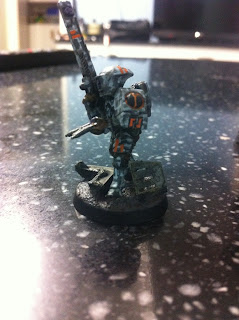 I've always been a big fan of urban combat, the city fight campaign was awesome and I love the idea of battles raging through futuristic dystopic cities; and the Tau excel in that kind of terrain, with many places to ambush the unweary enemy and retreat into cover. It was a no - brainer to go for an urban camouflage scheme - and to enhance the links to the world as we know it today, I went for a digital camouflage pattern that is all the rage in the modern military machine.
On something as small as a Fire Warrior, my test model, painting it consisted of painting a large number of straight lines overlapping to confuse the eye. As most of you will know, painting a large number of tiny, straight lines is an absolute nightmare and I don't look forward to having to paint another 23 of them for the army.

I chose Orange as the spot colour for all of the squad markings and such as it reminds me of Battlefield 3, which is one of my favourite video games and it does provide a striking contrast helping to break up the colour scheme.

This colour scheme has been done before, and you can find some really inspiring examples on the internet with ease - I like the Tau as you can achieve a broad range of looks with the colour schemes that wouldn't be out of character with the army itself. I think the army will look quite nice when done, and I will be posting pics up of the completed Riptide hopefully by the end of the week.
at 10:54 pm